LOTUS-Simulator is a driving simulator in a class of its own! At the beginning, the player chooses freely a vehicle and drives it around town, enjoys the ultra-realistic feeling of driving and the original sounds and may even forget that the vehicle is virtual.

As many of you may be aware, Australia has been under a state of emergency due to the large amount of bushfires which have spread uncontrollably across approximately 103,000 square km of land.

As many of you may be aware, Australia has been under a state of emergency due to the large amount of bushfires which have spread uncontrollably across approximately 103,000 square km of land. Fueled by drought and extreme heat, the bushfires have burned across much of the country since September, and have caused devastation to many homes, towns, forests and animals.

To help with the relief efforts of this devastating disaster, we have joined forces with other great game developers and Humble Bundle to release a special one-week game charity bundle which features over $400 in games for just $25 or more.
100% of the proceeds from your bundle purchase go to help wildlife and animals affected by the Australian bushfires which can be purchased here. 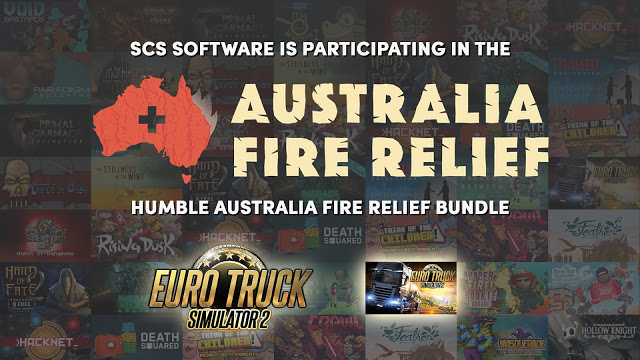 Many of the games included are personal favorites among our team here at SCS Software, and include some great indie titles. Let's see what our developers have to say about some of them!

Ondřej "Duff" Dufek, ATS map DLC lead:
Tower of Guns - The name says it all. First person bullet hell shooter. Do you like quirky humour and silly guns? Play this game.
Frog Detective - Yeah, again, the name says it all. You are a frog and a detective, with a really useful magnifying glass. Use it to solve the mystery, or not. Really funny short game with great characters, deadpan humour and wicked dance moves.
Machinarium - Adventure classic. How come you haven't played it already? It celebrates its 10th anniversary. Great puzzles, magnificent art style and the soundtrack, ahh, the soundtrack...

Martin "Dirk" Haustein, ETS2 research lead:
Mr. Shifty - Another take on Hotline Miami-esque game, but by no means just a copy. The teleport mechanic makes all the difference and in the end makes this an enjoyable though short game. The story is pretty much just "someone stole some plutonium" but still manages to be witty and make you smile.
Hand of Fate 2 - If you played first one, this is pretty much the same thing, just more of it. There are new weapons, enemies, companions, quests, but in the end you are still just a card in the hand of the dealer.

Katerina Chatzimichalaki, World of Trucks programmer:
Hollow Knight - Cute little metroidvania game with tight gameplay, beautiful soundtrack and art style and satisfying story. It is extremely exciting that there is more to come on the next installment Hollow Knight: Silksong.
Hacknet - A terminal-based hacking simulator with a mysterious storyline, and a great soundtrack that helps you get even more immersed to the hacking contract at hand.

You can find many more great games in this bundle from Australian developers and also by developers all around the world. You can also find there our own title Euro Truck Simulator 2 bundled with the Australian Paint Job Pack which features Aboriginal art and kangaroos to paint your truck with. Be sure to share your support by using the Hashtag #HaulForAustralia on our Twitter & Instagram!

You can help make a difference by doing what many of us do best, which is play games! We thank you for your support in advance if you choose to purchase this special bundle. You can purchase the Humble Australia Fire Relief Bundle here.