You've patched in to the enemy's security system: get ready to make your plan. Frozen Synapse is the ultimate strategy game: you have full control over your strike team, directing their every movement. At the same time, your opponent is plotting to defeat you. Plan your moves, then hit the "Execute" button: both you and your enemy's turns are executed simultaneously. Bite-size, hardcore strategy with a striking sci-fi aesthetic.

We start kicking some ideas around about the iPad UI... 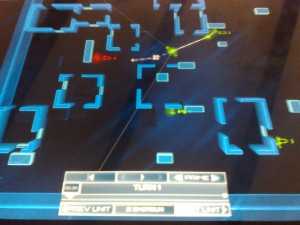 Ian and I just had an interesting conversation about the iPad UI based on my feedback yesterday. Here are some of the things we’re going to investigate:

Most of this stuff is impossible to speculate about in abstract (it’s the UI version of “theorycrafting”, if you want a Starcraft analogy – I’m sure none of you did), so what we’re going to do is decide on a subset of things to actually implement; maybe actually following the paradigm of implementing multiple methods for different actions to see which ones work better.

By the way, by being really open about early *thoughts* like this, I really don’t want to attract comments like “OH GOD YOU ARE SO STUPID HOW COULD X THING POSSIBLY…” or “WHY ARE YOU NOT DOING Y…” This is not the point where we’re really looking for external feedback, as we’re still brainstorming – we haven’t even tested yet – I just thought it would be interesting to document the process in light of where we’ll get to eventually!Thoughtful feedback is – of course – welcome, however!