DSS is now taking pre-orders and is on Greenlight!

We are happy to announce that Deep Space Settlement enters its pre-order phase! Head over to www.deepspacesettlement.com for more info on how to pre-order.

The game has been in production since 2011 and will hit the First Playable milestone by the end of the year. By pre-ordering now you will get exclusive access to this very first milestone release and will be a privileged early backer and supporter of the development team. We will listen to your first-hand feedback and you will help shaping the awesome 4X RTS game Deep Space Settlement thrives to be.


The game has been completely self-funded until now, at first with personal savings and later through side contract jobs. Now, full time dedication to the project would require your support and we feel the game is close enough to a solid first playable release. In this release you will be able to:

Q. When will it release?
A. We strongly believe that in order to make Deep Space Settlement one of the best 4X RTS game out there we need to take the necessary time to nurture the game in all it's glory. Setting us hard deadlines would compromise the quality of DSS. Please understand that we are a small team of passionate and dedicated indie game developers who will do whatever it takes to put an awesome game in your hands. By pre-ordering the game you will contribute to this goal and we can't express our gratitude enough. Thank you!

We are also starting a Steam Greenlight page, vote yes to help get us to the Steam store! 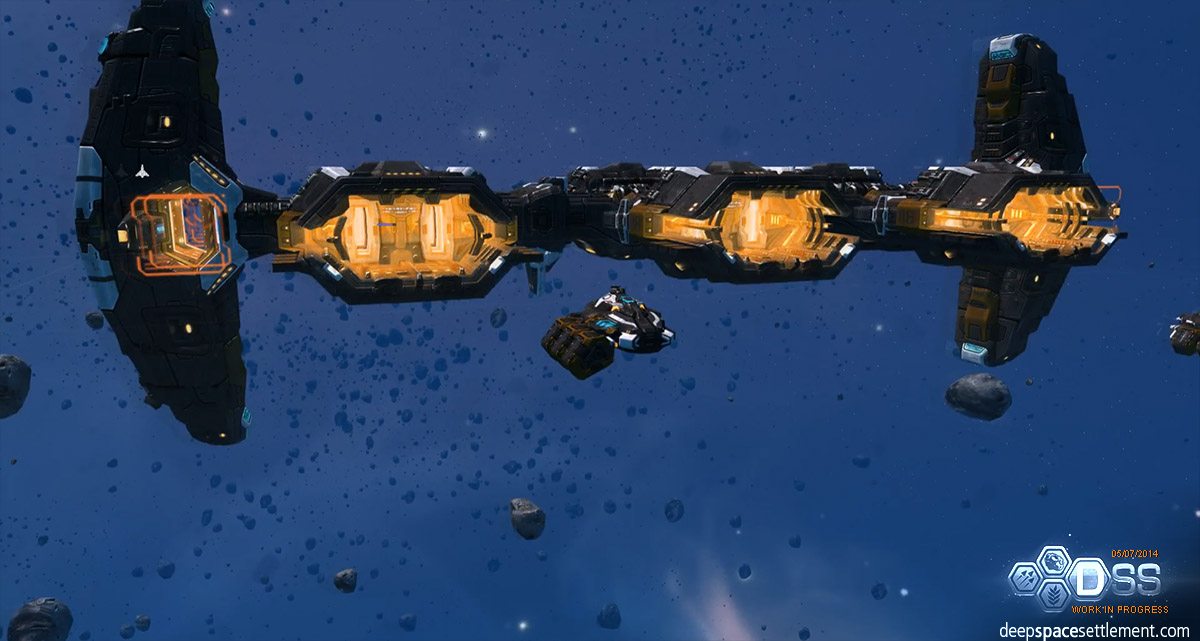 Awesome, best of luck to you guys, would really like to see this one turn out as good as it can be.

I'm more than an excited for you guys, I've been watching this mod for about half a year now and the progress from then up to now has been phenomenal. Congratulations on making it this far! I'll gladly pre-order next pay check :D

It's not a mod :) It's a new game, build on Stepahnie's own engine.
But thank you very much, it's not been easy, but the future is looking very bright now. All the support we've gotten over the last few days is still a bit overwhelming :)

50$ for pre-order? Nope.jpeg
You still get my vote for grennlight and I really like the game so far (from what I've seen). Maybe you wanne give me the option to back you up for half the price and without the option to influence the game?

Thanks for voting, that's awesome! As for a lower pre-order price without being involved in the dev process, we might do that when the FP releases, so just watch this place I guess :) Thanks!

No Problem, you sure derserve it.
As for the idea of a low price version, I have no idea how you are set up in financial terms, but it always seems to me that people funnding things by themselves sooner or later need some backup, so I thought it might be a good idea to offer this.

Game is looking awesome so far, can't wait for the release. Also take your time developing and refining the game if it means that we'll get a better overall experience in the end. This quote from nintendo comes to mind "A delayed game is eventually good, but a rushed game is forever bad".

That's an awesome quote and a great insight. Thanks for your understanding!!

Looks interesting but 50$ is too steep for early access.

Hey, no problem, maybe later then!

As others have stated $50 is quite a bit to ask for on a highly risky proposition. All the same the dev(s) seem really committed and progress seems steady. But you're still competing with prices like $17 for Planetary Annihilation.

Planetary Annihilation is 45,99€ for me, which is more than 50USD. Add to that the 2million they took in through KS, which we don't have. You can think of our 50USD preorder as a second or third tier KS. If you wouldn't go for that, no problem, it's fine. The current pre-order is meant for people who really want to support the game and the genre, people who are prepared to give a little more instead of just buying a game. And we are happy to have found quite a bunch of them by now :)
Thanks for the compliment! We are very committed indeed :)

It was on sale for $17 this summer sale, and yes their kickstarter was quite large as well. The issue is that the price each customer faces does increase substantially. Aside from that I can understand your pricing strategy, it ensures people who want to actually help the project become realized only buy in, and stops the casual consumer from buying an unfinished product.

If you don't mind me asking, how are you guys for funding? At this stage does it seem as though you'll be able to complete the game without substantial additional funding?

This is me, sorry it didn't log me in for some reason.

When I bring up my steam browser, I got to Community>Greenlight>Greenlit
Type in Deep Space Settlement in the field "Search Greenlight" and nothign comes up. just thought you should know... :( Gotta go through the internet browser... login.... siiiiiiiiiiiiiiiiiiiiiiigh

Not sure why the search doesn't work for you, but try this link Dss.stephanierct.com which should open dss in your steam client.

+1'd on greenlight. Great concept, looking forward to playing it.

Glad to see you guys hit such an important milestone - game looks great as always and I can't wait to see the future polish you put on it.

It's looking great! And don't get me wrong, I have all the hopes in the world that you'll finish the game in a good and concise manner, but...

It's been in development now for at least 2 years (judging by your news feed here), and we're yet to see much actual gameplay. It has mostly been (albeit awesome) snippets of the really good stuff - Dare I say vertical cuts? - but not much in the sense of proper, coherent gameplay videos. I think a lot more people would be willing to fork over those $50 if you provided something tangible, a proof that the game isn't just a couple of well thought-out, loosely knit-together systems with no real synergy between them, that the game has longevity past building awesome-looking ships and so on.

There have been a fair few early access games that showed promise in concept and in early development, but didn't deliver, all those promises never coming together in a coherent manner, and that has put a lot of people (including me) on edge against investing in such products. I hope that I'm making sense here.

Hoping for a more complete view on what you're gunning for in the sense of game flow and longevity, so that I can invest my $50 with confidence that they don't just go into fueling a pipe dream or an eternal project.

Thanks! We are well aware of that and are working towards a first playable release which will be anounced with a gameplay trailer. So, once this is done, not only will you get to see gameplay, you will be able to experience it too!

DSS has been in development since 2011. It's built from the ground up with a custom specifically developed engine with extremely deep modding capabilities. It also has all original content. As such, it's a completely different animal than say Unity games, which can be pumped out in a few months, esp when you get all assets from the asset store.

Yeah, I get that, and it's highly commendable. I just wish that I could get a better grip on what a complete game of DSS would be like, if you understand what I'm saying.

To give you a good example of how not having that can screw you over, you may or may not have tried a game called Banished (it's out on steam). It looked really cool from the outset, a solid strategic survival simulator on a more macro scale, but it lacked deep progression and end-game content. Once you had moved past the initial stage of getting all amenities up and running, there was nothing new to do, except expand your village, and that only entailed repeating the same thing you already had done once. This is the kind of scenario that scares me away from preordering, at least.

I get that the game isn't done, and thus that you can't provide a video of how the finished game will play. That is not what I'm asking for. A mere concept of how it will be would be enough to reinforce my belief in the game enough that I'd toss my money your way and shout from the rooftops about it's glory :P

Say, for instance, if you released a unified design document with the concept for the different systems you'll have in play when playing, or even better a narrated video explaining through examples how different choices and actions develop the gameplay in different ways, that'd be enough to convince me :)