This is a major release of this game, with many new features, and a veritable truckload of new high quality content. Every aspect of the game has been improved upon and expanded, from the engine, to the game code, weaponry, and overall gameplay.

Some of the new features for this release include:

Alien Arena is a freeware deathmatch game that has been around for some time, and steadily evolved into what we feel is a leader among a crowded fps field. With it's smooth gameplay, balanced weapons, and rich, immersive arenas, the game is an artisticly cohesive tour de force in the genre. Alien Arena is free to download, free to play, and the code is open sourced, and that will never change. 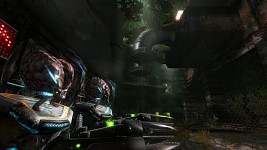 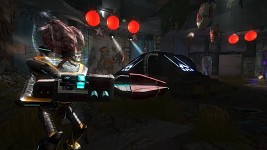 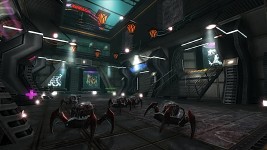 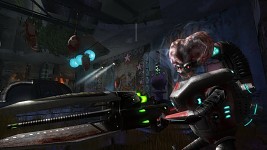 The model lighting code honestly needs to be improved. The vlight code is over complicated and it could be reduced quite a bit, the rest of the lighting code is quite mixed and just awkward to be honest. I know where the vlight code was gotten from, and honestly you guys are better off not using it. Theres better ways.

Its in the Darkplaces engine. What do you expect?

Alien Arena doesn't use Darkplaces, or any code from Darkplaces at all.

The vlight code is a fallback for lower settings, it's not even used much, and it's pretty damn simple to be honest. There is nothing complex at all about it. I'm not sure what you are even talking about regarding the lighting being "mixed". It either uses vlight, or it uses GLSL, depending on the settings.

what I mean by mixed is that you guys still get the models lighting from the lightmap even though you have the color and direction information from the actual lights.

I recall we had reasons for that, I don't remember exactly what it was though. That area of our code is on our radar though, and in the coming months we are making some changes to it. It will render incredibly fast when completed.

I'd like to apologize for these crap comments. I was not fully understanding how everything was used and jumped to conclusions. :/

it would be realy awesome if you made a leveling system