=R.O.C.K.= =DEMO= ~Radioactive One-Eyed Critter Killer~ -Game-------------------------------- The Objective of this game is to kill as many ROC's (Radioactive One-Eyed Critters) and get as many points from gathering goodies and such. Your gun shoots rocks, which allows you to kill the critters. This DEMO version of the game contains 2 levels. The first level is the First level of the Story-Line, the Tutorial part, which shows you how to play the game. The Second level is the Mirage Cave made by Ridder Blauw. This cave is not to be taken lightly, There are many things that are not real, but some are real, so you must watch your step! This level is very rewarding (score-wise) but it's a real challenge for the player. You also have the option of creating your OWN level using the Level Editor. 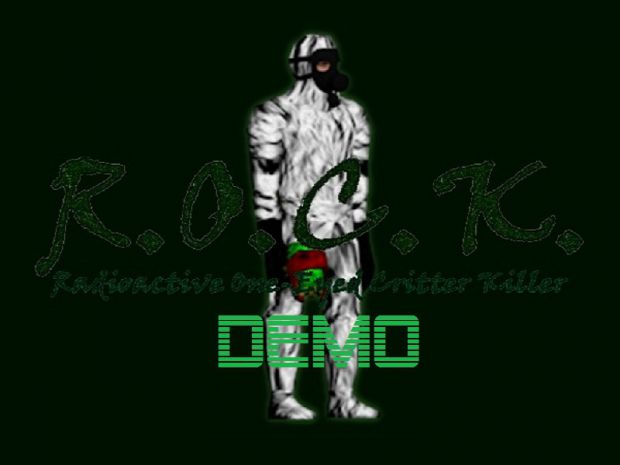 So ok i didnt had the time to check out the game but i manged to do it [Finally !] so ok here goes:
The game style is a good ol' retro game with monsters you have got to kill and well i dont mind that i just mind wasting my free time. so when i play the console on the side [more likey the Command Prompt]
its pretty much annoying. when ever you pick up a goodie and the command prompt says "Goodie for ME". there is some sort of purple "Force field" around the player. is that natural ? or a bug in production ? i dont know what about you but i think the run and switch weapon keys are useless. the switch weapon key should be in the numbers. the running should be auto but only if you feel like walking you should hold shift. the game has a ok demo and needs more work.

Hope this turns out a little better.
Avenger2150

The demo was what i had done and showed to the people in Breda's NHTV, graphics were not important (yes i still need to remove that purple thing) and if you read the readme, it would have told you that the switch weapon is useless... Run is not useless, use it in combination with a moment key and you move faster, and jump higher ;)
The command prompt thing, i can remove that if you'd like :P
You can also just play full screen, then you dont notice the 'annoying' console thing :P

Well i already know how to remove it and still play window. just move the command prompt behined the game window. oh and i forgot to say this in my last post but i think you should slow down the monster speed. its like there spriniting back to there homes for dinner.

Aight thanks for the suggestions, I will put them to good use ;)