Phantasy 2018 full install series v150 patched to P7. This is the final build for v150 series; among other things it fixes marriage for fresh starts, and can hot fix (without restarting) every version of v150 series for these issues: necromancer problems, mana regeneration, too dark in most night battles, tournament betting broken, orphan villages keeping factions open after defeat (but ONLY on fresh starts), endless reinforcements in large battles, battles not respecting the slider value (but blind to battle sizer changes), recruiting issues - replaced recruiter with town based caravan recruiting, players no longer ignored by factions when they become king, faster map movement, and a few others. You should read how to use the mod and ask your peers questions at Taleworlds forum below in the description. This is a co-production of guspav and gsanders, neither of which is likely to answer questions right now. > 40 patches since Christmas 2017 in this.

High fantasy with magic, cleric prayers, undead summoning, bard songs for profit, crafting, harvesting, diplomacy, wife as a companion, a robust economy allowing trading as a lifestyle instead of a novelty. Both good and evil options exist, and finally the developer stopped favoring one side in the hearts and minds of another. If its not in here, it probably doesn't exist. 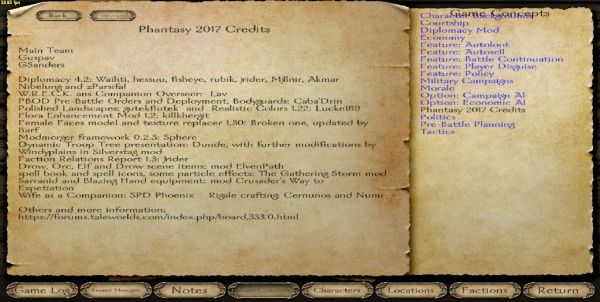 were missing the necromancer skill

necromancers start with skill 7 and cannot add to it anymore. You should start as a necromancer if you want to be a necromancer, instead of adding it later to be one of everything.

ok so now how would we become a lich as the option never shows up for me i also am using the version from the other mod page thing so it might have bugs this one does not have.

Liches are removed for P7. You start as a lich if creating a necromancer in v156 though. You would plop the 156 patch right over this, ideally copying/renaming the Phantasy v150 folder to Phantasy v156 to help keep the save games straight (as the order of saving variables is different in 156 so v150 saves cant be run from 156.

In general v150 P7 hot patches older v150 but necromancer in specific is optimized so that day 0 you start with high necromancy and don't need to waste a huge amount of intelligence just to get the necromancy, giving you more freedom in early game. This is balanced by slightly harder to get a heal, which serves as a handbrake. Negative energy burst reliably heals player Necromancers in v156, and positive energy burst still heals player necromancers in v150 P7.

The v156 patches are at NexusMods
Nexusmods.com

ah ok thanks mate your my hero i love being a lich was really depressing to not see a way to be one thanks so much :D

messages pop up very late, in world map, and in battle.
and in battle, swarm of red line message pop up after minutes of battle, and any report messages comes very late too. (damage report, dead army, etc).
and somehow, my mana gone suddenly in battle.

is my file corrupted?

messages popping late suggests you had too many messages happen at once.
red line messages are interesting. You can press R to read them.
The most important thing is to not have Warband version 1.158 or earlier; only 1.168, 1.172, or 1.173 are OK to run the mod.
Taleworlds has an updater if you have an old Warband version. You just use the same serial number that Avengate mailed you when you bought Warband.

I'd guess you have Warband 1.158 or earlier running and thats where the red messages came from.

Mana suddenly gone as in not being able to use (magic user) spells suddenly suggests you didnt read the Taleworlds forums for how to use your character, not even the 1 page guides with pictures. You had a spell backfire, and that ONLY happens if you have all 4 weapons slots busy and then click a spell, which summons or tries to a 5th weapon but there is not any place to put it. In that case, wait 1-3 game days to heal. Any less and you wouldn't pay attention; any more and its cruelty. Each 24 hours in game you have a 1 in 3 chance to heal. Stay with it. In the mean time, your NPC casters never backfire. They drop 3 slots worth of stuff and you only need to keep one slot open. You have it easy; but they have access to every spell they have magic power to access, so you have a little more effort. That's why it costs so much to teach companions magic.

Also Warband 1.158 or less will have you move exceptionally slowly when wearing any heavy gear, as your gear's weight was impossible to determine. The operation that weighs an item wasn't added to the Warband engine until v1.161

true, It's Warband version 1.158!
Don't know how long I haven't update this game version, must be several years ago. LoL

how do you install this. I'm new to PC

If you're new to a PC then this will be challenging.
First of all, make sure you even have the game Mount & Blade Warband installed and working enough to play Native "mod" which is what comes with the game when you first buy it. Other than Warband, nothing further needs to be bought. The Warband version MUST be 1.168, 1.172, or 1.173. It can't be 1.158 or older.

If you use steam and Warband got installed by steam it is in this directory:
c:\Program Files (x86)\SteamApps\Common\MountBlade Warband\Modules

Next get 7-zip from 7-zip.org
Install 7-zip, which is totally free and without adware or other issues, and vastly superior to winzip.

Start Warband, do NOT start the mod Phantasy v150 yet, but instead now click "Configure", "video", and toggle ON "Load Textures on Demand". Exit back to Warband's first opening menu and NOW start Phantasy v150. You'll need the right arrow to find the new mod and after that it remembers your choice. You won't have to go back and toggle on Load Textures on demand unless you toggled it off some other time - it remembers your last setting.

At this point around 2 minutes pass as the texture files and resources load and finally the game starts. You should be reading heavily the forum Forums.taleworlds.com
otherwise you will probably be overwhelmed with "What do I do now" questions. This is NOT the place to pepper me with help questions. Put them on Taleworlds forum so someone who already is playing and knows the answer can help you.

what are the main differences between versions 156 and 150? cause i really want to play this mod but this is confusing me.

v150 is loose so far as choosing your class. This means you could
add cleric and mage classes as you go along, and the functions in bard and monk aren't tied to a specific class. Bard just has slightly different starting bonuses and a free musical instrument that otherwise you'd have to find at a village, which might need looking at 6-12 different villages until you're lucky. Mage could be learned by a quest at any of the 4 magic guilds. Necromancer is NOT a dynamically added class anymore; you should choose it immediately (and immediately suffer the penalties), or you wont have it. Or do yourself a favor and just start with an easier class and skip necromancers entirely. Period.

so if v150 is the "beginner" form, what does v156 do?
Well first of all, the underlying save game data is different, so savegames started in series v150 must stay with v150; savegames started in v156 must stay with v156. mixing the two will be corruption. You can of course have v150 in one folder and v156 in a differently named folder and Warband will load the right save games to the right mod, so you can have both mods. You just tie up a little more disk space that way.

So back to v156:
unlike v150, you need to decide really what 2 classes, maximum, you want to be. There is no chance of making a necromancer who becomes later a cleric who becomes later a magic user who gets side cash entertaining as a bard and who has no limits on unarmed damage (which is a v156 Monk, which does not exist in v150) which ... is possible with v150. Its not in v156.

Instead, v156 starts with a black character creation screen and shows you exactly what you get by choosing each option, and can set the player's in game variables to enable up to two classes immediately. You get the option to start as your own king, not even a vassal, at day 0, just before you make your character, and if you do this you are given Dhirim and several castles and 8 lords already in your kingdom. They're stripped from Swadia but then Swadia gets a few lords from other factions so they aren't completely crippled. All of this happens while you're still choosing your character. If you pick an evil race and you start with Dhirim then pretty much all the human and elf factions around you will squish you quickly, since Dhirim is the center of the map, so be careful -- or your time as a king won't last long. This is roughly double the chance if you pick necromancer, which is implicitly also setting your race as lich. In my opinion, you should not make your first character a necromancer, and if you do, you should not choose to start as king but immediately go visit either drow, orcs, or the undead and become a vassal for protection. Or start as a necro, put your money and troops in a safe place, lose the kingdom, then become a vassal, and 8 lords hate you but you stole the crown's cash. Except you wont get any vassal offers except for those 3 factions, and will never be offered mercenary contracts as a necromancer...

v156 also moved the map around. Drow are up north, and every non-native faction has 2 towns at start, with native factions somewhat weaker than in v150.

v156 adds auto-resurrection, which salvages a few of your tier 4 or higher dead IF you have several high level clerics in party. The clerics can be any alignment but good aligned will be more successful at resurrection than evil -- this is totally different from necromancers raising undead. You get the troops back, added back to your party, in wounded condition, that otherwise would have been removed from your party. You don't see a message about it unless you click Notes: Recent Messages, in which case it tells you how many dead your party had that could have qualified for resurrection, how many clerics you had trying to resurrect, and how many dead actually got rescued. Its a small thing but I reckon tier 4 or higher are hard to replace. They cannot resurrect undead troops or golem class (which includes Ogres).

thanks man your mod is awesome as hell i never seen anything like it before.