THIS IS A MOD FOR EU3 IN NOMINE VERSION 3.2 You MUST use the 3.2 patch on top of In Nomine (retail 3.0) to play! In Nomine Ultimate is the definitive mod for the In Nomine expansion of EU3. In Nomine was always a fun little pocket version of Europa Universalis that could run on basically any hardware. The later versions of EU3 (Divine Wind) suffer from serious stability and border gore issues, and EU4 suffers from feature bloat. This makes In Nomine arguably one of the funnest versions of Europa Universalis. In Nomine Ultimate brings a complete overhaul to the base game with fixed provinces, cultures, localisation, culture and religious conversion, colonisation mechanics, and much much more. The Victoria 2 projection was used, which is a major upgrade from the vanilla projection

This update started off with the discovery of how to FIX the infamous "Balkan Crash". The Balkan Crash (BC) was a crash that would occur after any sort of major modification was done to the EU3 map. On some computers, notably with integrated GPUs, the game would instantly crash upon trying to zoom in. The issue was due to some kind of coastline complexity. This is why on the previous version of IN Ultimate, there were two map folders: one with the experimental Vic2 map, with the Balkan Crash, or the vanilla map for iGPU users.

After having spent an entire month trying and failing to find a solution, about two weeks ago I tried to tackle the Balkan Crash again. Through trial and error, and switching out every .bmp file one by one, I realized the crash only occurred when the modified terrain.bmp was loaded. I knew the issue was there, alongside the coastlines. What I ended up doing was separating the water and land into two layers and applying a sort of blur filter wherever the two met.

In my mind, I was 95% convinced this would result in a crash, because the "blur" effect created many pixels on the coastlines that were neither water-coloured nor land-coloured, falling outside the range of accepted colours. Usually, in this situation, a Paradox game will simply crash on startup. In this case, however, the game kept loading and loading until it eventually reached the main menu. I was in shock, and noticed the coastlines were a little bit more pixelated than before. However, when I loaded into the game running on an iGPU, I was able to zoom in over the entire map. The Balkan Crash was no more.

Once the Balkan Crash had become obsolete, I was now left with a version of EU3 IN that could run on ANY computer, without ANY crashes, with the superior, realistic Victoria 2 projection. I immediately started modding the map by adding additional provinces, something that was impossible before as I'd have to meticulously match any map mods for BOTH map folders. With that out of the way, I started fixing areas of the default map, and now there are hundreds of new provinces, with the following areas fixed (provinces rearranged to fit realistically with additional provinces):
-Maghreb
-Egypt
-Levant
-Middle East
-Arab Gulf
-Persia
-Anatolia
-Balkans
-Korea
-Wallachia
-Ukraine
-Russia
-Southern/Central Italy
-North America, around the Rockies
-Australia

Further tinkering with the map, I found my original patchwork solution of leveling the entire terrain to be flat, effectively removing topology.bmp, was not cutting it for me. I liked the idea of having mountains and valleys on the map, especially using permanent terra incognita around big mountain chains like the Rockies. I got back to work and found a global topology map, then meticulously puppet warped it to the topology.bmp, then set it to black and white, got the levels juuuust right, and voila: I had accurate world topology for the entire map, and it looked GOOD!

Adding hundreds of new provinces allowed me to add hundreds of new tags to make the new province density interesting. For example, southern Italy is now as rich in countries and cultures as the north of Italy. Russia has had dozens of new Russian minor tags added in. Anatolia has new Beyliks, previous OPMs now have two or three provinces to their name, etc. All the new provinces were properly balanced too, via the base_tax and manpower modifiers.

After that the only thing that was left was transforming EU3 In Nomine Ultimate into a serious mod that is correctly balanced. This took a lot of work, and, thanks to discoveries that allowed an even BETTER observer mode, I eventually completed my first complete AI timelapse of the game that ran from 1399 to 1805. Using the knowledge gained by watching the AI, I crafted new events and removed old ones that would allow for a much deeper and more engaging gameplay.

Throughout, the stability of EU3 In Nomine Ultimate has remained mostly unchanged. Upon starting a new game in 1399 or later, there seems to be a 15% chance of the game eventually crashing within the first few decades. On the 1299 start, the chance goes up to about 25%. However, I have only noted this on AFK AI timelapses. If I am sitting at the computer watching, it rarely crashes if ever. Also, once the game gets past the first few centuries without crashing, it seems you can leave it running in the background AFK and it will not crash.

This peculiar method of action suggests that there may be some kind of bugged event that only fires early and has a greater chance of firing before 1399. The curious bug could also be tech related, although that is very unlikely. Regardless, if you save your game decently often, it will not be an issue.

Of course, I could have sat on this version for longer and tried to complete the events before uploading, but I fear I will soon slow down with my EU3 modding and maybe switch to a new Vic2-era setting mod using the new map. However, there are still some things that I need to do to really help the end game be more engaging, mainly:

The reworked colonization system is not yet complete, meaning that although colonies will gain their independent culture by the year 1700, there are no actual forced uprisings or rebellions. In my AI playthrough, by 1805, there were only two independent North American countries: Two-province Mississippi and two-province Oregon. The big colonizers of NA are all very resilient due to very good AI, and even the complete collapse of the Ottomans did not force their colony in Peru to rebel, although there were a couple of rebellions.

The solution will be to implement Colonial Uprising event chains for each new world culture. The first event will be to grant all the cores, and inform the owner of a desire for liberty. Then, there will probably be rising tensions, and an opportunity to release the country as a vassal. When that fails, the event will spam a BUNCH of nationalist rebels in those provinces, and that colonial uprising could spread to neighboring new world cultures. For example, all the south american cultures will end up revolting if a single one of them starts the revolt. 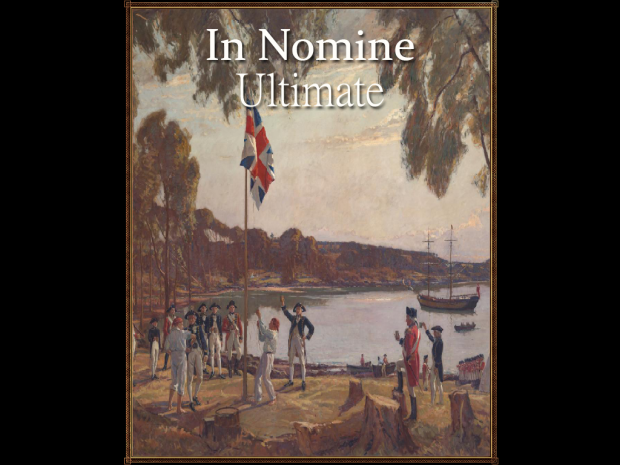 Excellent version friend!! Really the in nomine is amazing

Can you remove the permanent terra icognita? Which is not even in the whole world mod??

Thanks for the great job :D

Thank you for your great feedback! I'm so happy you like this mod.

I'm currently working really hard- ok, have been working really hard- for a whole month or so on a new EU3 project. To put it briefly, it's Victoria 2 in EU3. It's way more than just a low-effort repaint of the map. The Vic2 map was ported in completely, all Perma Terra Incognita was removed, and that's just the very beginning.

Expect this new mod to go up here on Moddb pretty soon. I certainly hope you'll try it and have some pleasant expectations that you'll really enjoy it. In Nomine ultimate is like the baby version, this new mod is like its grown-up twin.

Just a suggestion that your future mod work with non-European nations with some EFFICIENT WESTERNIZATION system, without the need for a physical border (as in Japan that westernized without needing to have a border with the US and later became a world power), Some way for european nations to be less aggressive with countries outside europe (Africa and America) to be more fun to play with chinese, african and american countries, indonesians, indians and nomads and near nomads from central asia.

On Eu3 almost all of the few American and African nations do almost nothing. They don't colonize, they don't have many wars to do (when they don't have any) and especially the WESTERNIZATION is terribly bad. The Europeans are ultra aggressive, they barely see you on the map and they declare war on you and annex you.

Hi there, I just wanted to tell you that the new project I mentioned is released as a mod now- if you want to try and give some feedback that'd be super cool.

Also, westernization in that mod works like you describe. Closer to vic2, no physical border needed :)

game crash in loading database then there's file exception telling me that ''could not open file faction.txt'' any fix?

Faction.txt, huh? Looks like you're trying to play this mod on EU3 Divine Wind! This is a mod for EU3 In Nomine version 3.2

If you have EU3 Complete on Steam, you can choose to "remove" the "DLC" of Divine wind and HTTT, leaving you with only EU3 In Nomine v3.2.

If you don't have EU3 on an online platform, message me on my discord: GTAIV#9702

thank you for the information!

Hi! I have downloaded your mod and I liked it very much. The new nations, regions and culture deepens the game a lot. But why there is dozens of North American native nations and none on South America? And I think in 1299 the nation that dominated the Middle East was the Ilkhanate and not the Seljuks. Besides that, wonderful work of modding, even more impressing considering that is a old game. I would say that is a must have for EU3.