We have encountered an issue with 3D perspective offset error for the cursor and shooting direction of our player character in the top down camera angle. Our article is to share the solution that we've found out during the prototype phase.

Posted by aeonsparx on Apr 11th, 2019 - Basic Client Side Coding

As per in the developed game ZombieSoup, it is supposed to be a top down third-person view angle but due to design constraint, it has a twist is that the floor plane is not normal to the camera angle, which means it's not a 90' degree straight view like an usual 2D game does. The problem adds on that perspective view is used instead of orthographic that causes distortions in space that results in the distance like feeling. In ZombieSoup, the camera angle used has a 10' degree offset from the usual normal line from the floor plane. Diagram 1 below shows a sketch of the current scenario. For cursor world location, we used visibility hit result under the cursor which gives us the result of whatever the cursor is pointing in the world space. 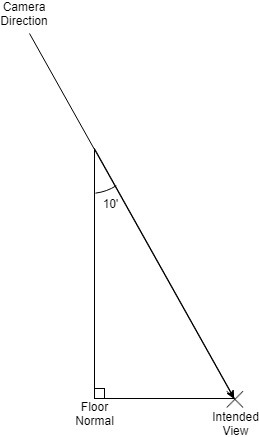 On ideal situation, where the character's actor location has the same Z (height) level as the cursor's world location, using the old method to calculate the Z rotation of the player character will not be a problem. However, the problem comes in when there is a height difference. Since we only wants the Z rotation the old calculation will ignore the Z difference. Shown in Diagram 2, you can see what happened to the player's actor location when u transform its Z to the same height as the mouse Z value. As you can see from the spawned particle location based on the player's location and the cursor location, there is an error caused by the non-normal view as the Z height does not go along with the camera's view. However, if you draw a between the two explosion smoke and between player's location and the projectile hit location, we can see that this two lines are perpendicular to each other.

From here we can see that the error is caused by the distorted perspective view and the non-normal camera angle. To attempt to fix this, we need to transpose the player's location in relative to the camera viewport as in, the "correct" Z axis movement. Diagram 3 shows an example scenario of what we need to do. 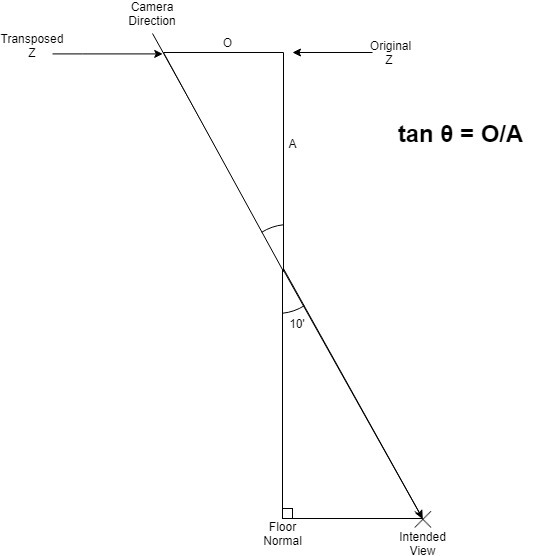 Based on Diagram 3, to perform the transpose, we need to find O value. According to the trigonometry formula, we would require 2 variable which are the angle and the A value. Angle can be obtained from the Camera Manager of the controller and the A value can be calculated by the difference between the cursor Z value and the player's location Z value. After performing the calculation, the transpose can be applied to the player's location to achieve as shown in Diagram 4.

With this calculation performed, we can dynamically calculate where the player should point to regerdless of the height difference that might be available in the game. The only down side of this approach is that every mouse movement required to go through a formula calculation which may only take a very small amount of processing power that even a calculator can perform in split seconds.