This is the first part of the basic USC tutorial about how to set up a 'Single Mission' game and create & configure your squad.

1. Setting up a Single Mission 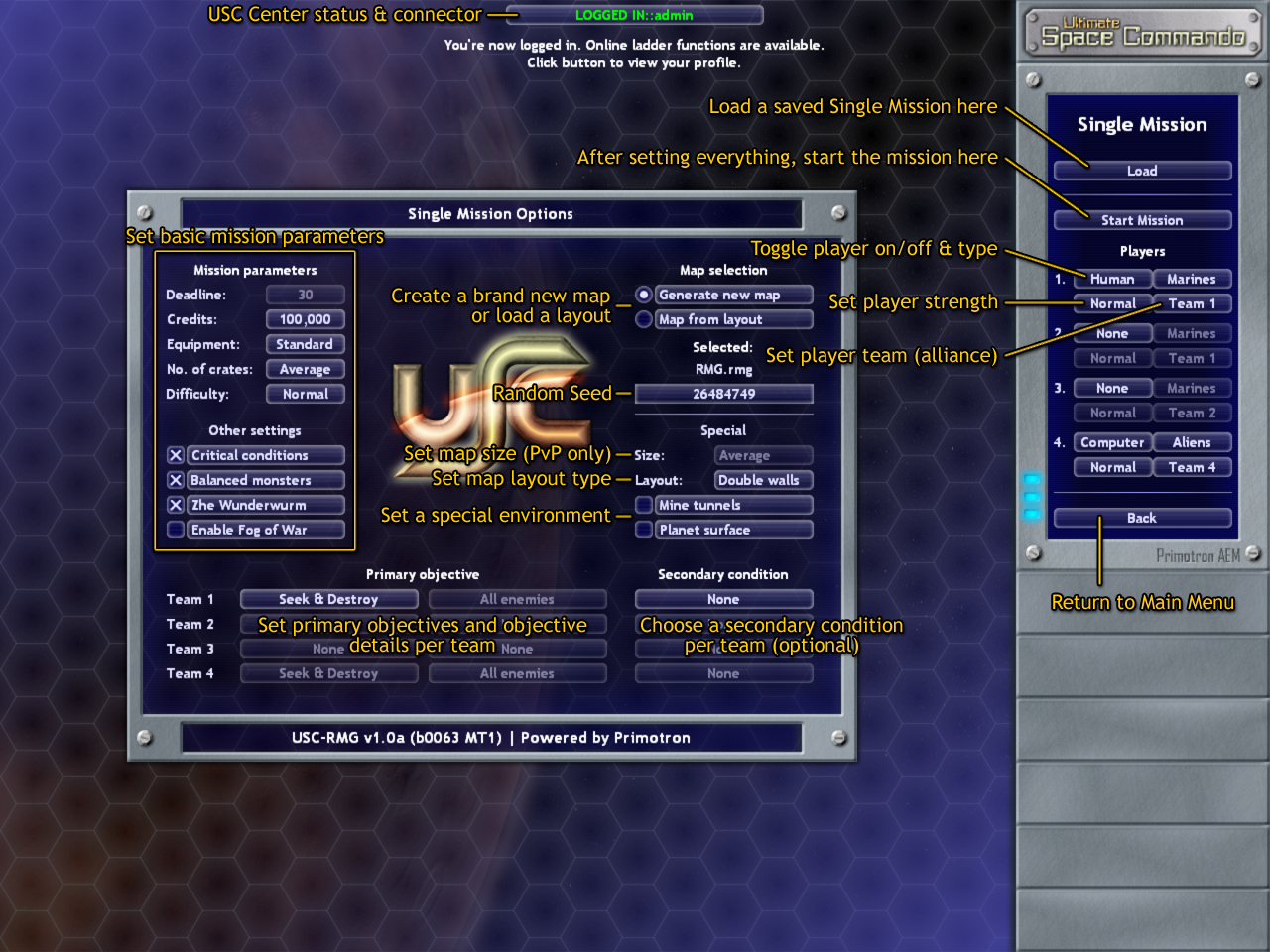 1.2. On the panel to the right (replacing Main Menu) you can set up the players and teams for the mission. Click None, Human or Computer to add/remove a player or to switch player type (option toggles). As for the current version, human players are always USC and the computer is Aliens. Note that Player #1 must be human. Player #4 must be in game, but you can switch it to human if you want a 1-on-1 PvP.
Set the players' team by clicking the Team #? button next to them. For now, a team may only consist of 1 or 2 players (squads). As you toggle players and teams, the objective controls on the left will change, see later. You may additionally set player strength/handicap by clicking the Weak / Normal (default) / Strong / Deadly buttons (option toggles). If you choose a human player to be stronger, it's units will have more Skill Points, but will get less score. If you set Aliens stronger, they will grow in numbers, but you'll get more score for defeating them.

1.3. Set basic mission parameters in the top left corner of the "Single Mission Options" window. The tooltip texts there will provide detailed information about the settings. You should leave everything at default for your first play.

1.4. Set map parameters on the right side of the window. You can have the Random Map Generator make a brand new map, or you can load a Layout (map elements can still be random based on layout strictness). For a new map, you may specify a custom random seed (a number of any size). The same random seed will result in the exact same map PROVIDED all other settings are identical.
You can set the map size for PvP games, the map composition for all games, and you can choose a standard (no checks), mines or outdoors environment.

1.5. For the active teams (teams with at least 1 player, naturally), you can set the mission objectives and secondary conditions by clicking on the enabled buttons (options toggle). Teams with Aliens only always have the Seek & Destroy -- All enemies objective.

1.6. When you're ready, click "Start Mission" in the top right corner of the screen.

1.7. Note: saved Single Missions can be resumed from this same screen: you only need to use the "Load" button, all the other settings are just for creating a new game. 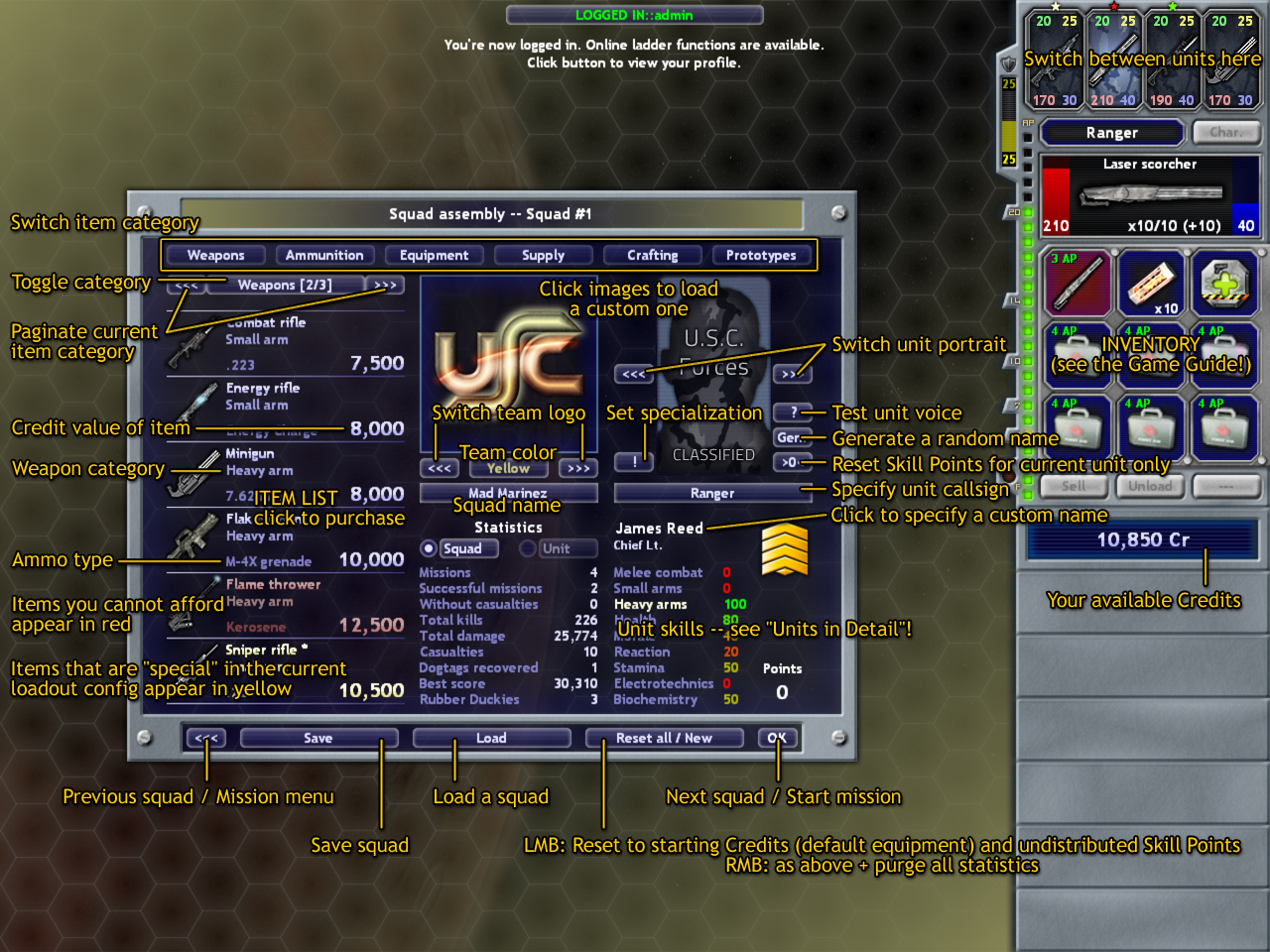 2.1. After starting the mission on the previous screen, Squad assembly will appear.

2.2. You can create as many squads as you want, but once you've come up with a fairly good basic setup and done your customizations, it's very recommended to save your squad by pressing "Save" on the bottom bar and specifying a squad filename. Then you can use this squad for other missions, achieving squad progress. (If you don't save your squad or aren't using an existing one, your progress won't be saved.) To use an existing squad, just click "Load" and select the file. You can save a squad with different filenames, but only the most recent save will store the progress you achieve in your next mission. Generally, you should only use one squad file and maybe another one for occassional backuping or "documenting". You can always change your squad loadout and even the unit skills without losing squad progress! However, you can only deploy a squad one instance per mission. For 2 or 3 squad missions, you'll need multiple unique squads!
Squad progress in Single Mission mode means the crafting materials, prototypes and statistics. Units don't advance or get promoted in this mode. But via crafting, you can achieve quite good development and become strong enough to storm Ativarna and ULTIMATE difficulties!

2.3. Assembling a squad is a complex task. You have to distribute your units' skill points (e.g. train them) and buy (and later also craft) the weapons and equipment according to your units' abilities and your chosen tactics. Your main resource is your Credits. You have to spend it wisely to have both enough firepower and survivability.

2.4. It is a common practice to buy weapons and ammo first, and assign the respective combat skill points (melee, small arms or heavy arms). A skill level of 80-100% is absolutely recommended in Single Missions. When browsing weapons, watch out for the category (melee, small or heavy) and the type of ammo it uses. These information are shown in the weapon list. You can also find ALL data about weapons and ammo in the Game Guide. It is advised to only have one weapon per unit. See the Weapons section for more detailed information. Always buy enough ammo for all your units! You should have at least 10x as much ammo as a weapon's single ammo capacity.

2.6. Skill points are assigned by left-clicking on the respective skill's name. Tooltips will provide you with enough information to successfully choose your skills even if you're new to the game. The best practice is to have a weapon skill at least at 80%, and some Health and Stamina (latter for more Action Points). Everything else is absolutely dependent on chosen tactics.

2.8. Press the small "OK" button to proceed (to the next player/squad, or the start of the mission). You'll be prompted to confirm your squad configuration. In this appearing dialog, you will also have an option to save the squad if you haven't done so already. The Map Generator will then create the mission for you. This should only take 5-10 seconds tops.

We'll continue with basic in-game controls and combat soon! If you're interested, keep your eyes wide open, as the playable USC Beta will deploy in November! Until then, if you're eager to play a test version and willing to do some feedback, contact us at admin@creatio49.com for Alpha access!