Post tutorial RSS Tile Rider: The history of light and shadow in a small (but standing tall) game

Posted by 7softpillows on Sep 26th, 2015 - Intermediate Client Side Coding

To cut the long story short, these screenshots show what the game is all about: 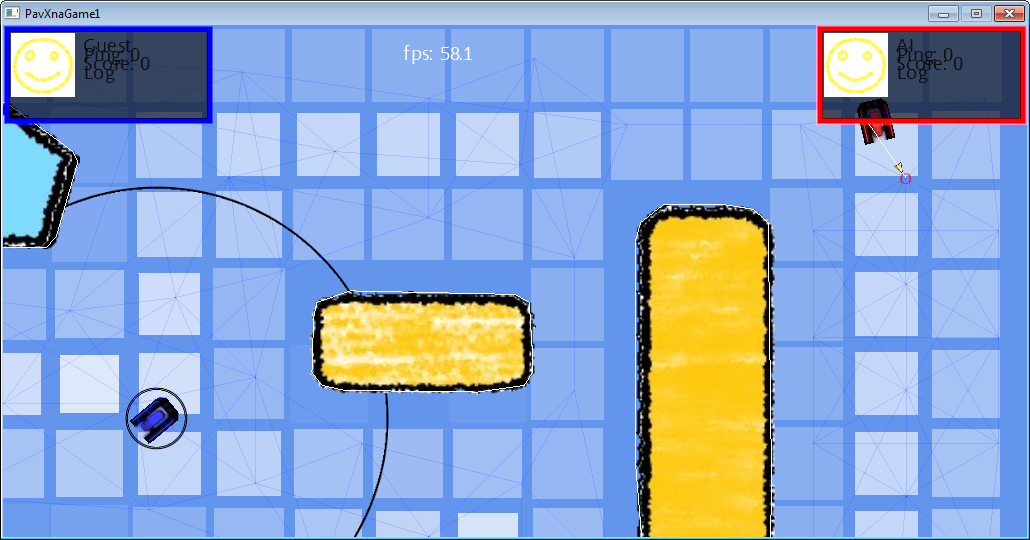 - it became clear that we needed to add something that would make the picture more dynamic and diverse, using the developer's skills only.

From that moment on, the process of inventing the way to implement the light solution in the mobile game, started.

This is to give you an idea of why we had to save on everything where possible.

Day 0: The Prototype of Light in the Game

To start with, and to check the idea, we decided to draw the light by hand. It was quite simple:

The Blend Mode was used with the following parameters: 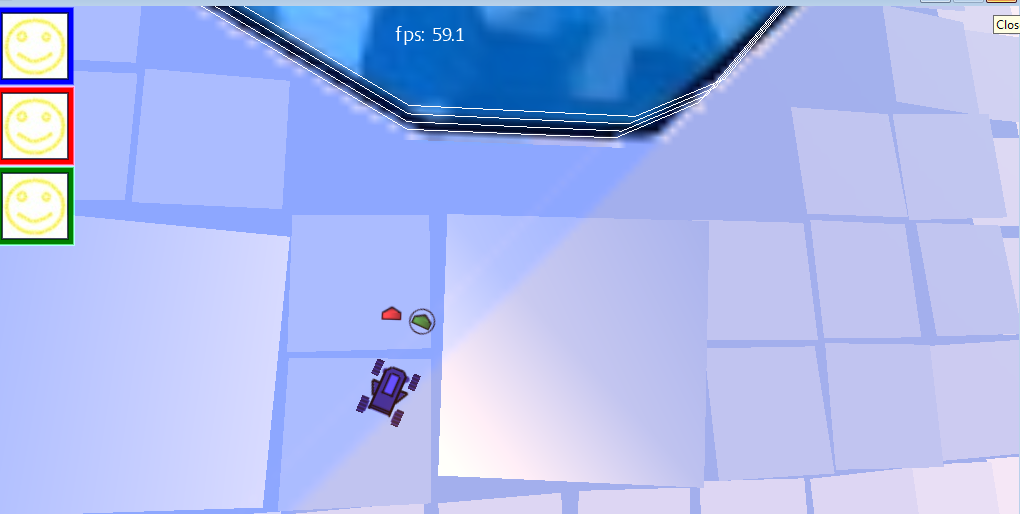 The game is 2d and the camera is set up to the same angle nearly all the time. That's why we make the simplest static light. 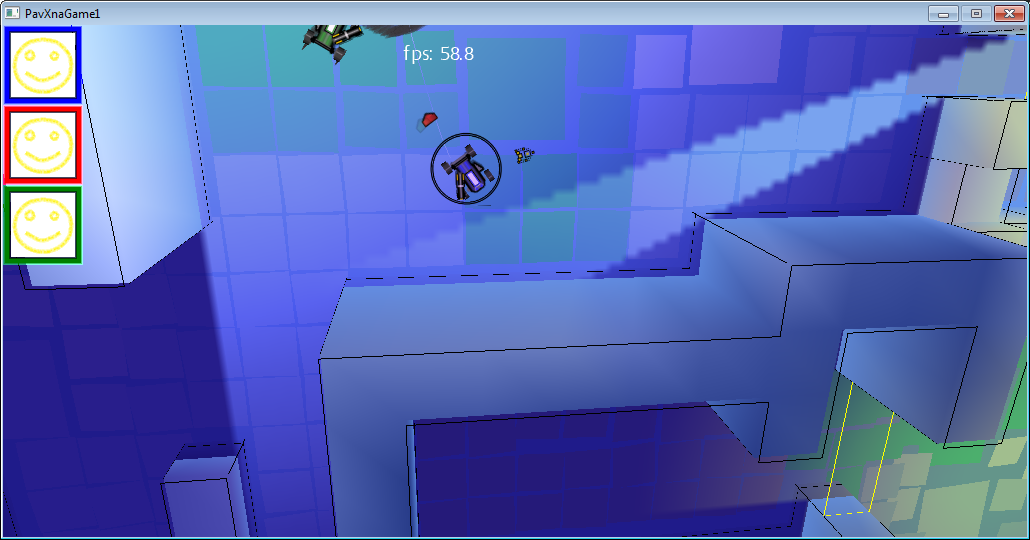 On loading of a level, the texture of light is generated. The texture is rendered above the level. As the game is «almost» 2d, there is no need in a sweep drawing. As 3d geometry is static, the light there is merged into the vertex color.

Light texture buffer (light map) generation is quite simple:
For each source of the light:

The result looks interesting, although a bit raw. 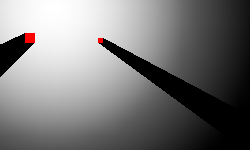 Usually the source of light is not of a point type. It means the shadow is not sharply defined. Moreover, it tends to be more blurred with increase in distance to the source.

Here the idea was stolen from a famous game – F.E.A.R. For each source of light, a light map is rendered several times with a little angular shift with regards to the source of light. 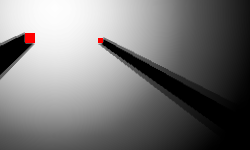 Here we only blurred the texture that deals with the light a little.

As the game is mobile and the shaders are very limited, we decided to use the possibilities of hardware interpolation 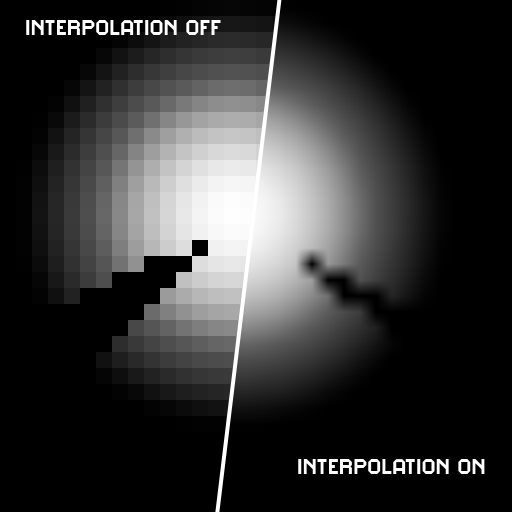 In order to achieve a smoother shadow: 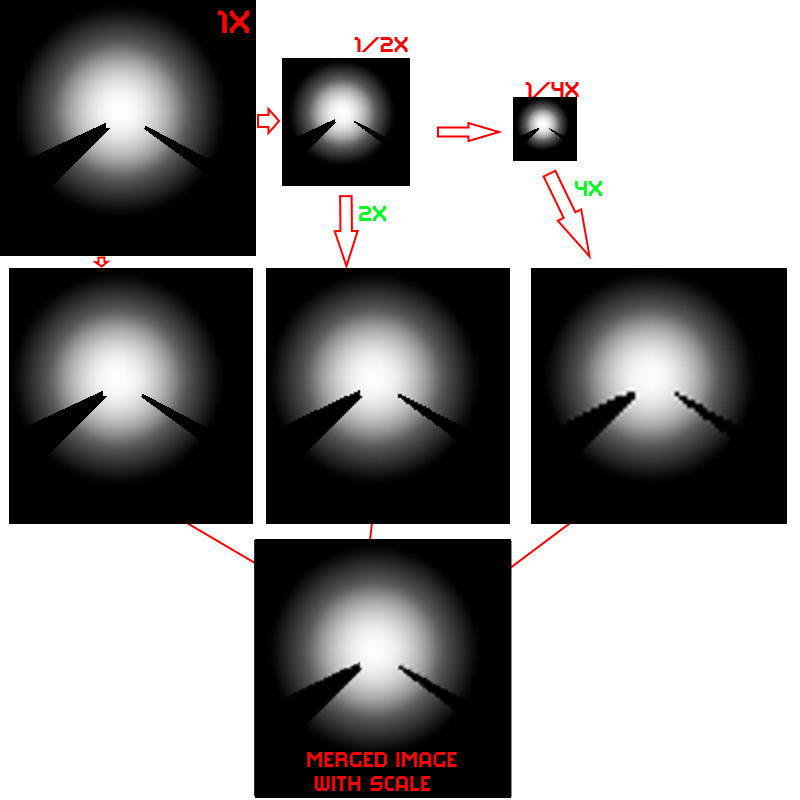 We had an idea to blend in a more «intellectual» way, so that to emphasize the sharpness of the shadow at the start and the blur of the penumbra. However, the result of a simple blend and the penumbra from the previous point seemed enough for us, so we left it that way. 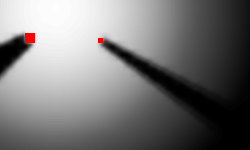 For creating the illusion of the walls ambient occlusion, we had to use one more texture (of a lower resolution), which was generated with the help of Distance Map.

For example, here is a physical map of the level. The walls are in red:

In this texture, the color of the pixel was selected by a simple rule:

If the distance to the closest wall is more than a threshold value – the color is transparent, otherwise the color is black.

As the texture is small there (1 pixel per 1 game cell ~1.5m), a smooth change in colors is granted by the hardware interpolation with the scale of the texture (it stretches up to 50 times). As all the walls in the game are square and are situated accurately in the grid, the small size of the texture doesn’t create any visual artefacts. 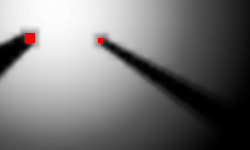 Or in the game: 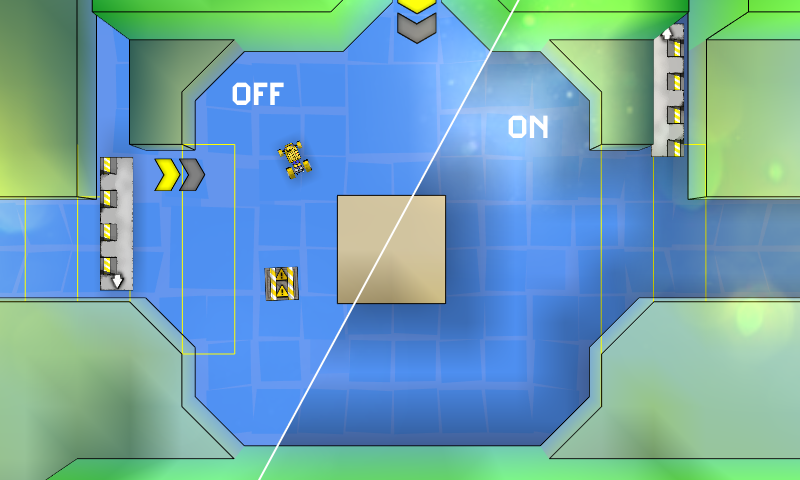 The difference, as you may see, is not significant, but it adds to the depth of the picture.

Static shadow is good, but dynamic is even better. However, we didn't plan to spend a lot of resources on it, neither ours nor computer’s. We had an idea to use 1-2 sprites for one dynamic shadow, and change only the angle and scale depending on the relative location of the object and the source of light. All game objects being rectangular, the calculation is not that complicated. No need to perform ray casting on shapes. We don’t need super-accurate shadow, it is enough to draw a rectangular shadow with the width equal to the projection of a dimensional rectangle (it is highlighted in red on the screenshot below) on the axis perpendicular to the beam from the source of light to the center of the object. 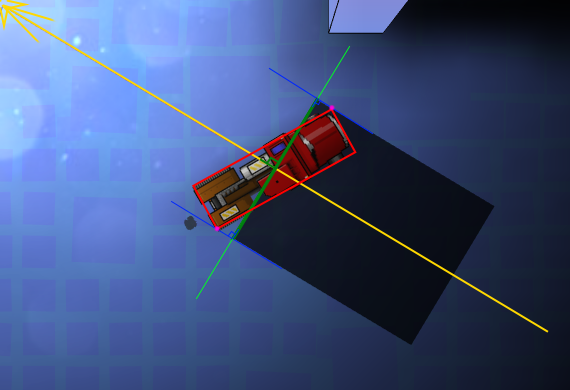 And in order to get a cone, render two sprites with a turn, considering the angular size of the object. 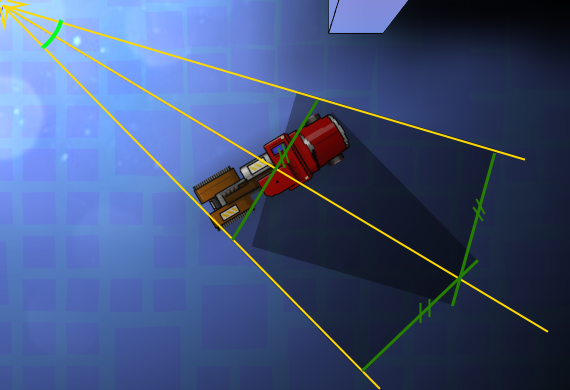 For the shadow sprite, we used the texture 4x4 pixel with gradient (the red point on the screenshot is the origin). 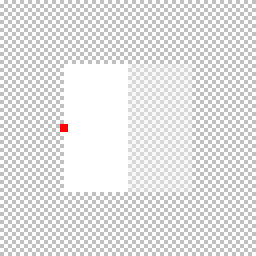 The result looks as follows: 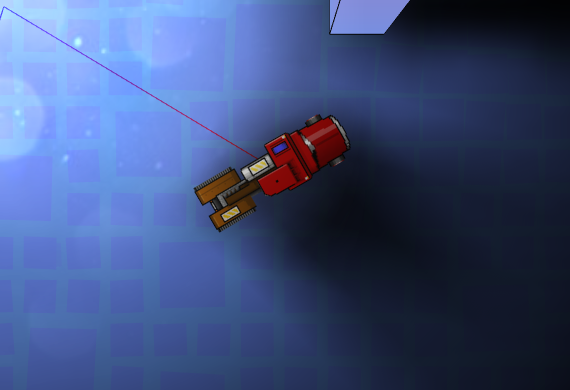 By means of the texture gradient, we achieve soft shadow. And as two textures are rendered with a little alpha blend, we get a more intense shadow in the center. 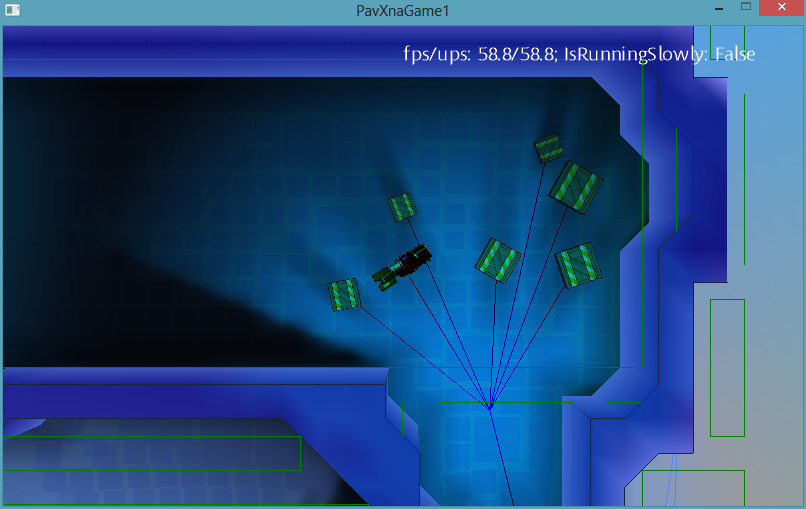 An example of the static and the dynamic shadows comparison: 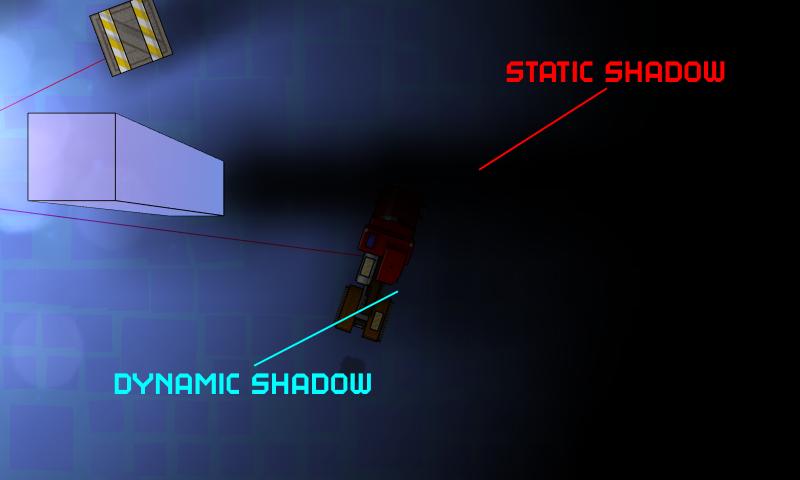 The final touch was a wish to add a fullscreen dirty lens effect.

An example is below: 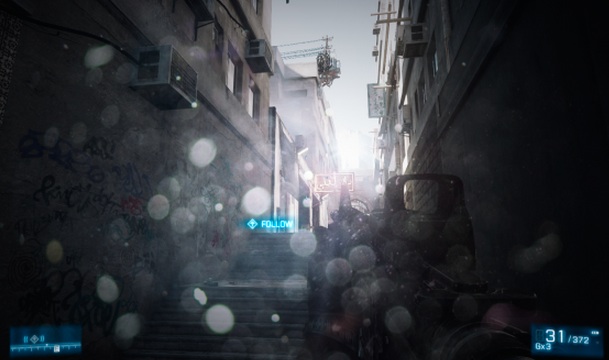 This turned out to be not as simple as it seemed, because of the absence of the full access to shaders and a wish to have high performance.

Take a dirty glass texture and use Blend Mode that reveals itself on bright areas. An example of the Blend Mode use:

Although the given solution was quick and sometimes resulted in a good picture… Example: 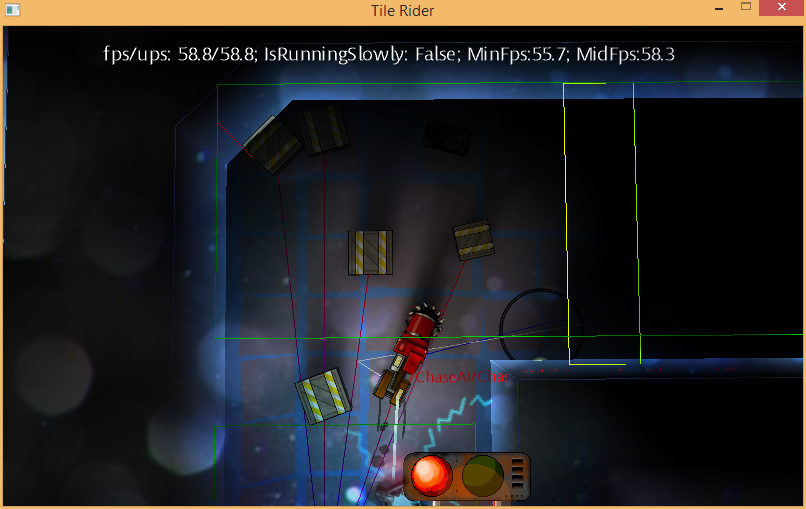 …still, in many cases the result was far from good. Example: 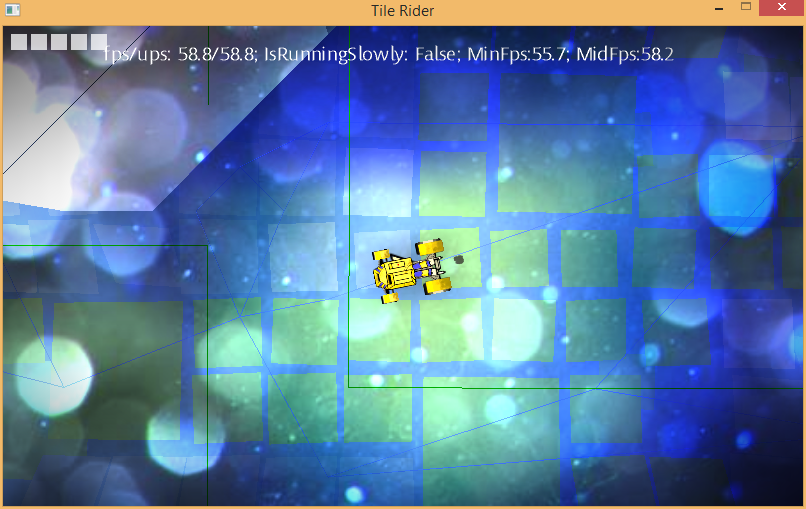 The reason is clear – we don't take the real light of the area into account, using the pixel color only. That is why the maps with contrast light look more or less good, and the ones that are well-lightened look horrible.

Render all lights from all sources (smaller in size and without shadows) in the camera projection, into the buffer. Then, render the dirty lens texture with Blend Mode from Solution 1. After that, the final buffer can be used: 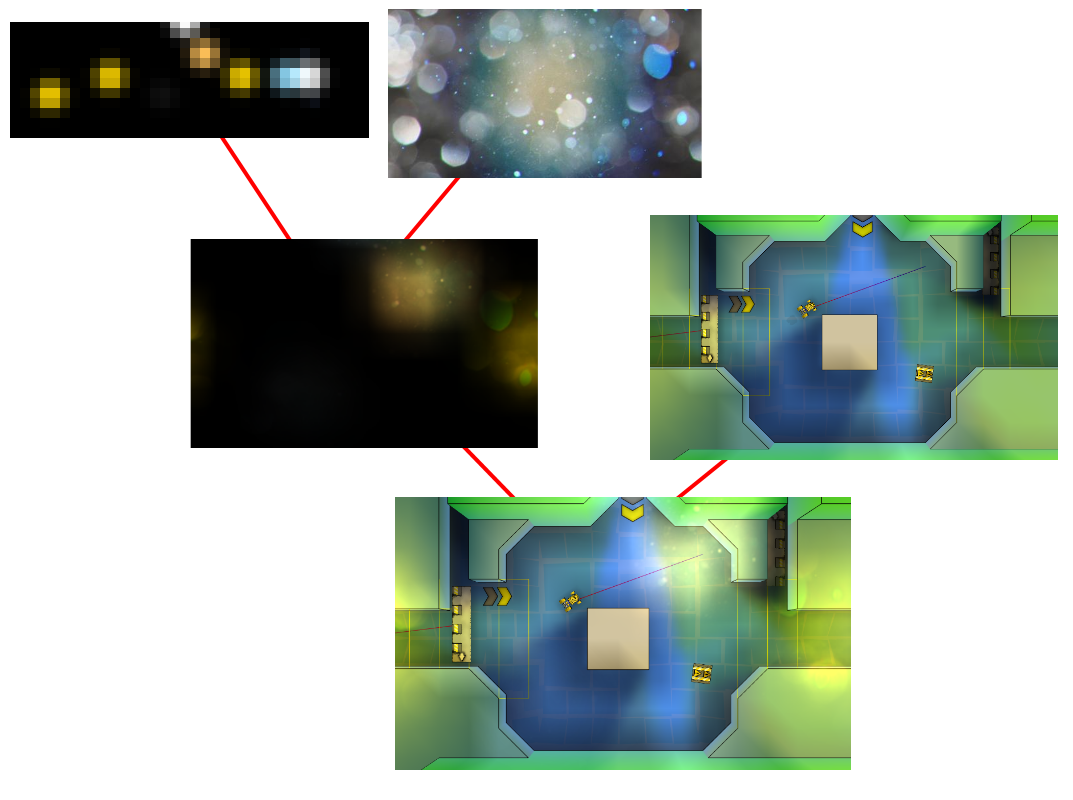 However, to render an additional buffer at every frame is not quick at all. The advantage of a separate buffer is – it can be updated not at every frame, but only during camera movements. But even after this optimization, the performance on mobile devices is far from desirable.

We didn't have the full access to shaders, but we had access to one pre-installed Dual Texture Shader. It blends two textures, taking into accout the textural coordinates through multiplying (to be more precise, through Modulate2X Blend Mode Blogs.msdn.com. The first texture was a pre-rendered texture that contained all light circles (it is enough to prepare it once for the level), the second one was the dirty glass texture. The only thing that needed to be updated at every frame, was the textural coordinates of the first texture. They are calculated using the screen projection on the coordinates of texture 1 (these are just world coordinates with a scale). 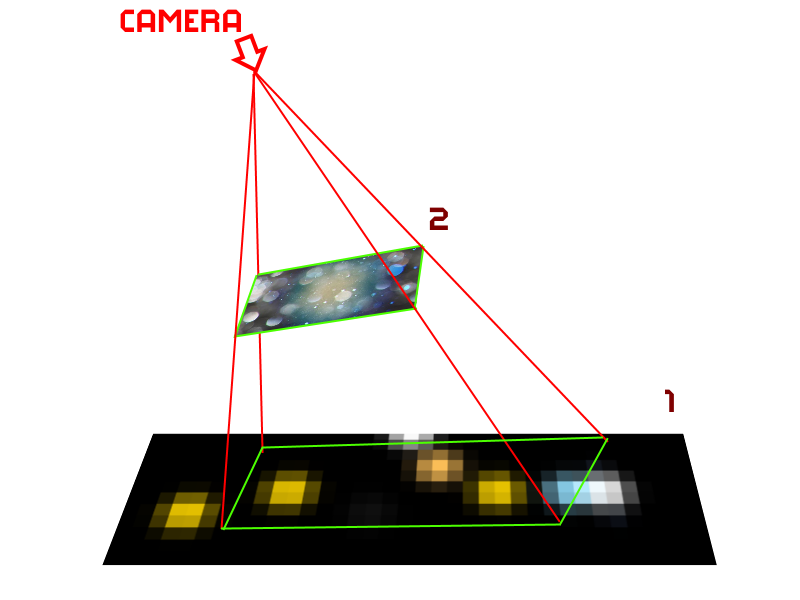 The end result is not much different from that of Solution 2, and doesn't require extra renderings into the buffer.

Thus, for the final frame we:

B) For each frame:

The picture below illustrates all the described techniques: 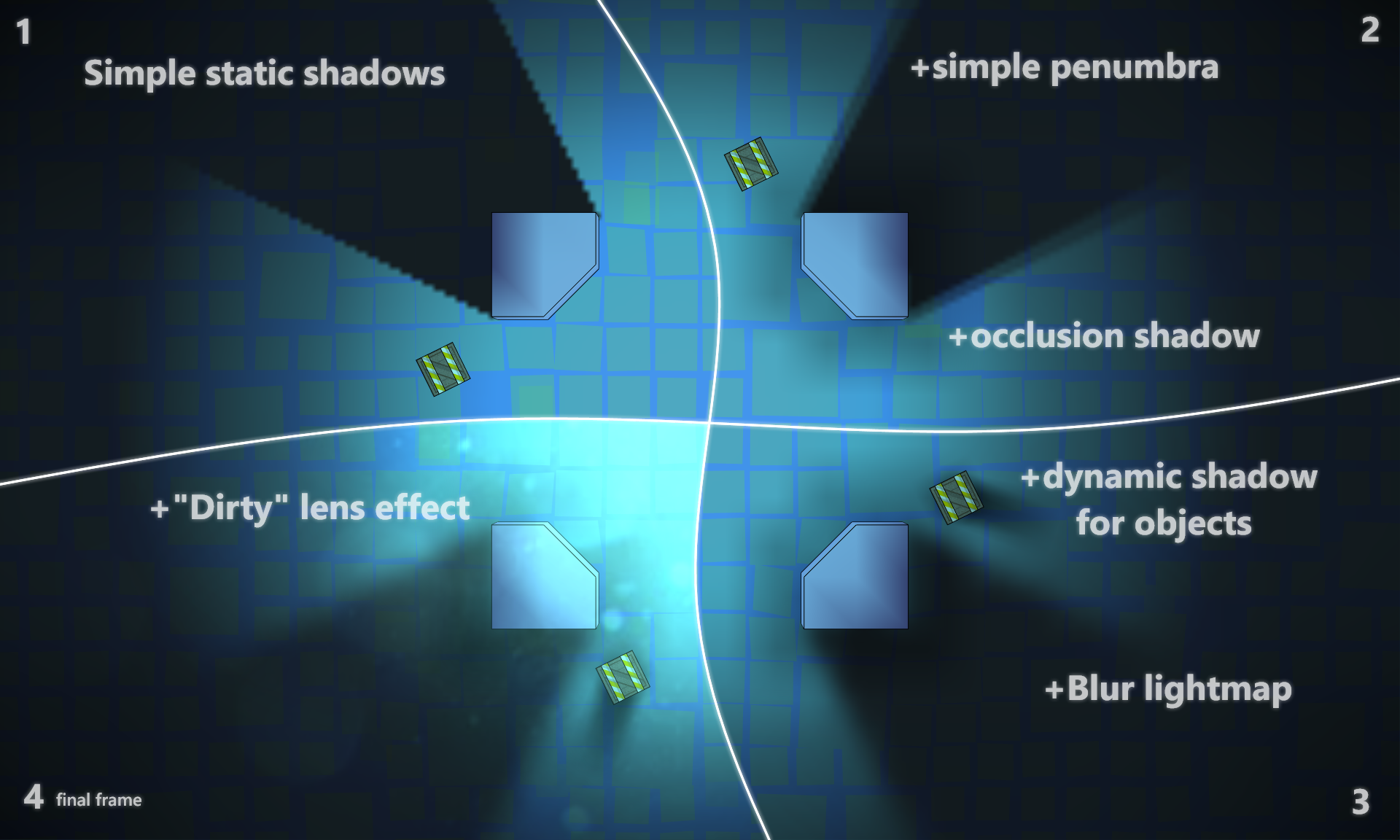