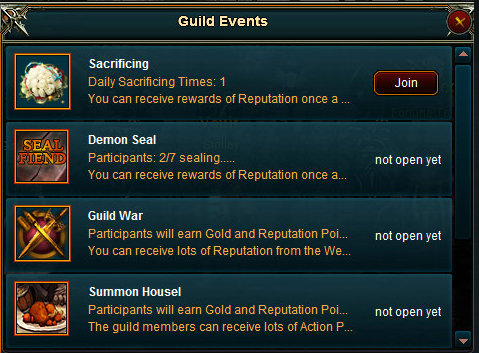 Sacrifice Each member can sacrifice once for free each day. By sacrificing something, you will add Anima for upgrading the Statue. As the Statue levels up, your Gold gain in instances will be increased for more times after you sacrifice something. 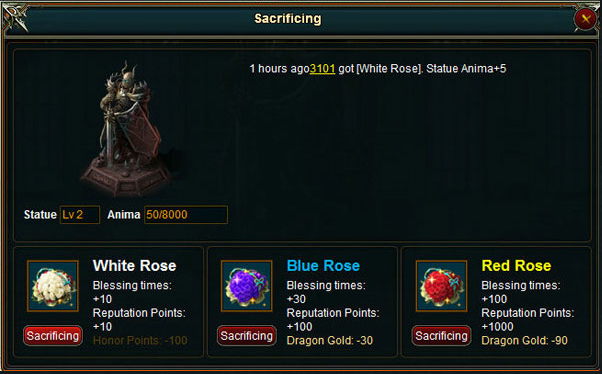 VIPs can spend Dragon Gold to sacrifice Blue Roses and Red Roses, and the other members can only sacrifice White Roses.

Demon Seal
To seal demons, you must ask 6 other members to help. You can only gain Reputation once each day (350 Reputation each day) from Demon Seal. When you have gained Reputation from Demon Seal, you will not gain more Reputation while assisting others in Demon Seal on the same day. If you don't have enough member, you can summon Angels for help. Each Angel costs 5 Dragon Gold.

Kill Guild Boss
The guild leader can set the event time and call all members to kill the Guild BOSS. Those who help kill the boss will win a lot of Exp. The event to kill guild boss will boost player interaction in the guild, provide players with one more way to obtain rewards, and also add much fun.
Requirement: the guild has reached Level 4.

Guild Dragon Hunter
Intro to the "Dragon Hunter" system: When your guild has reached Level 5, you can click the "Guild Events" button at the top of the game screen or directly the "Event" icon in the guild panel to access the "Dragon Hunter" event.
Dragon Hunter Rules: Each day you can draw cards automatically 10 times, but you're not accessible to the function of "Reverse". Only golden cards will lead to some points and thus rewards for you. The points are not stackable. The most points gained at one time will count as the final points for the day.
Reward Rules: The rewards for Dragon Hunter include rewards for individuals and for guilds. The guild members can be rewarded with Gold and Reputation if they meet the point requirements. The rules are as follows: