Posted by Skattastrophe on Feb 2nd, 2013 - Basic Other

Here is a basic guide on how to play pokegen.I'm going to assume you've downloaded the game from here or here, and are at the starting screen!It should look very much like this:

At this screen, you'll find a few options:

Single Player gives you the option to test out your moves against dummy pokemon. In the future, these will be replaced by AI, and more advanced features will be added. To access Single Player, click the single player box.

For Multiplayer, you'll want to pick a name, preferably the name used here to make you easier for others to identify! Simply type your name into the box here:

Start Server is for users wishing to host a game of pokegen and have other players join in. To host a server, you'll want to know your Public IP Address so that you can give it to other players so they can join you!Your IP, coming from the link above, will look something like this (the asterisks will be numbers) :

Connect to Server is for players looking to join a game hosted by another person. Once someone who has started a server gives you their IP address, simply type it in this box:

Then hit Connect to Server

You can also opt to turn off or turn back on the background music here, using the music button:

Now that you know how to jump into pokegen, let's look at some other options.First, the Trainer Select option.Here, you can choose to play as either the default Red, Blue, or a spectator, which can watch matches without UI elements getting in the way.Simply select the one that matches your choice before connecting to Single Player or a Server, by pressing the corresponding button here:

Pokemon Selection is next.While normally new trainers will receive their first pokemon from a professor, such as Oak, we didn't want to make you wait until Pallet Town and much of Route 1 were finished before trying pokegen for yourself!Simply select between the default Pikachu or Charmander before connecting to Single Player or a Server, by pressing the corresponding button here:

Now, once you've selected your options and connected to either a server or single player mode, you can begin walking with W, A, S, and D keys, and look around with the mouse. A wild CHARMANDER appeared!

Haha, well, he's just a dummy charmander, but he'll make a good practice target. To initiate a battle(sorry, you can't catch one yet, but if you want to use Charmander, just select him at the opening options!) first, you'll have to call out your pokemon, using the TAB key. 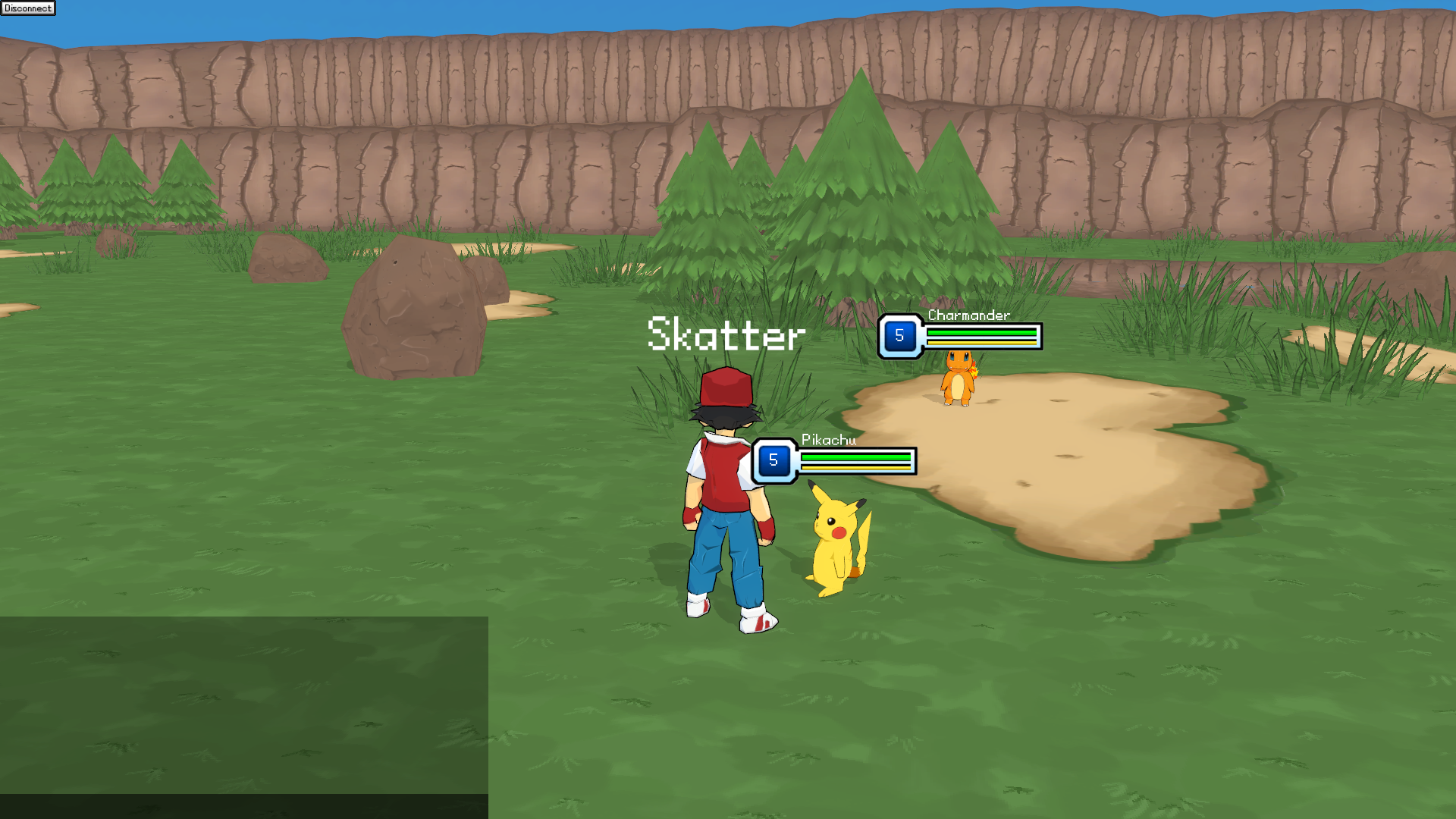 This is also how you recall your pokemon to its pokeball.

Once your pokemon is out of its pokeball, it will follow you unless a battle is initiated. To initiate a battle, look around for wild (or another trainer's) pokemon, and notice the red highlight.

Simply click on the red-highlighted pokemon to initiate a battle. Your pokemon will leave your side, and your camera will swap from your trainer to your pokemon. 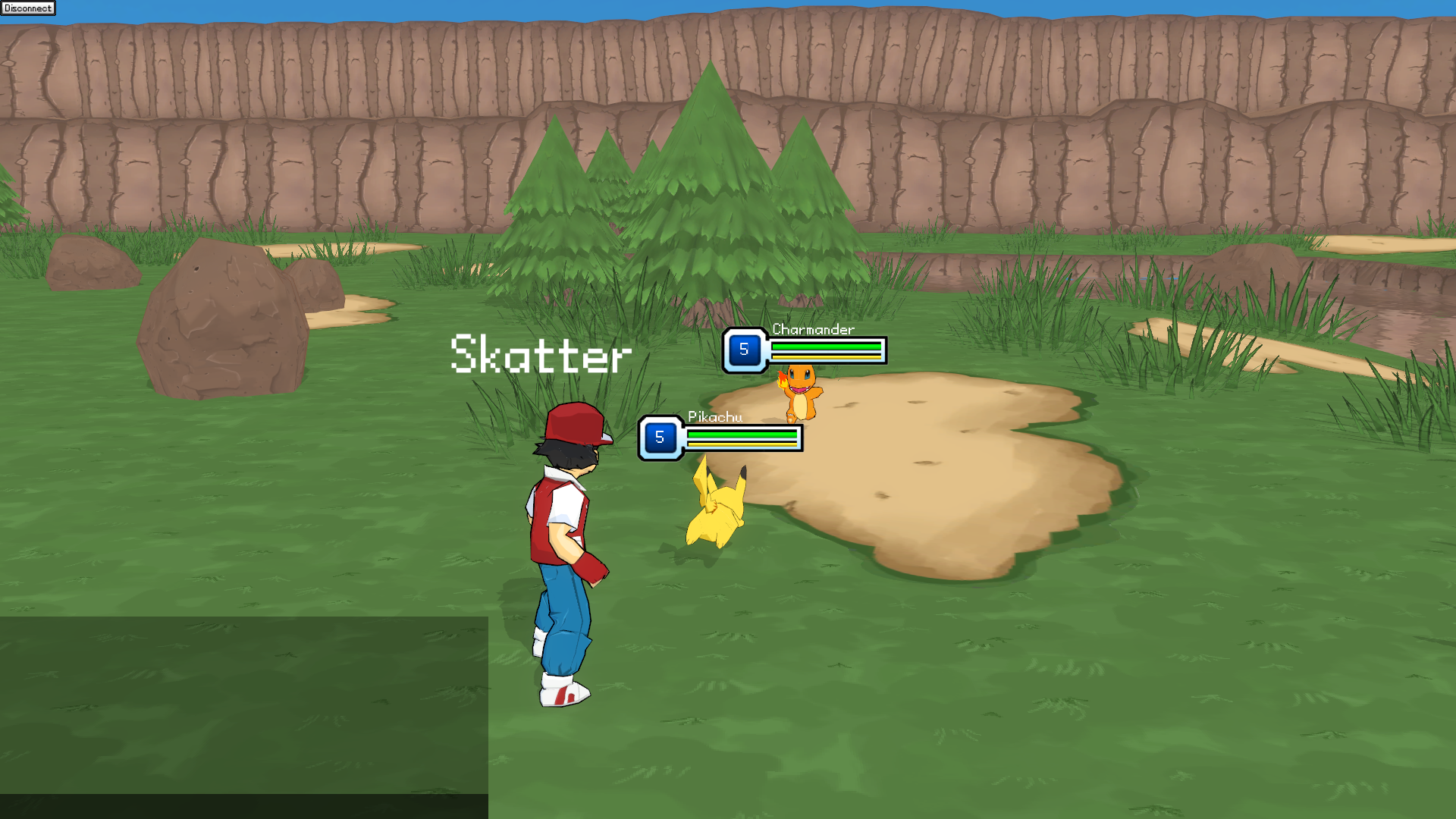 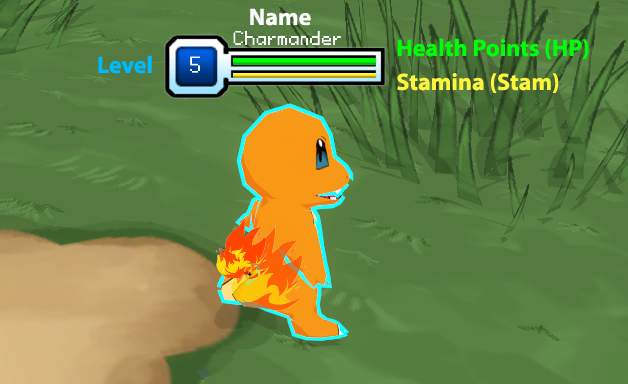 First, we see his name. Sometime in the future, this slot will be reserved for the pokemon's nickname. If no nickname is provided, the pokemon's default name will be used.Let's look at his level. the higher a pokemon's level, the stronger it is, and the lower a level, the weaker it is. At the moment, all pokemon are restricted to level 5. In the future, pokemon will be able to level up, but for now, to maintain SOME semblance of balance, an equal level is needed.Health Points or HP are your pokemon's life. Once your pokemon is out of HP, it'll faint, and can't battle unless recalled with the TAB key. For now, recalling a pokemon completely heals it.Stamina, or Stam has replaced the Power Point or PP system from the traditional games. Stamina is used every time your pokemon uses a move, and sometimes when an opponent uses a move against you.Now that your pokemon is in a battle, you'll notice that the controls are quite a bit different!First, you move your pokemon with the mouse now, clicking where you want the pokemon to go, similar to an RTS-type game. 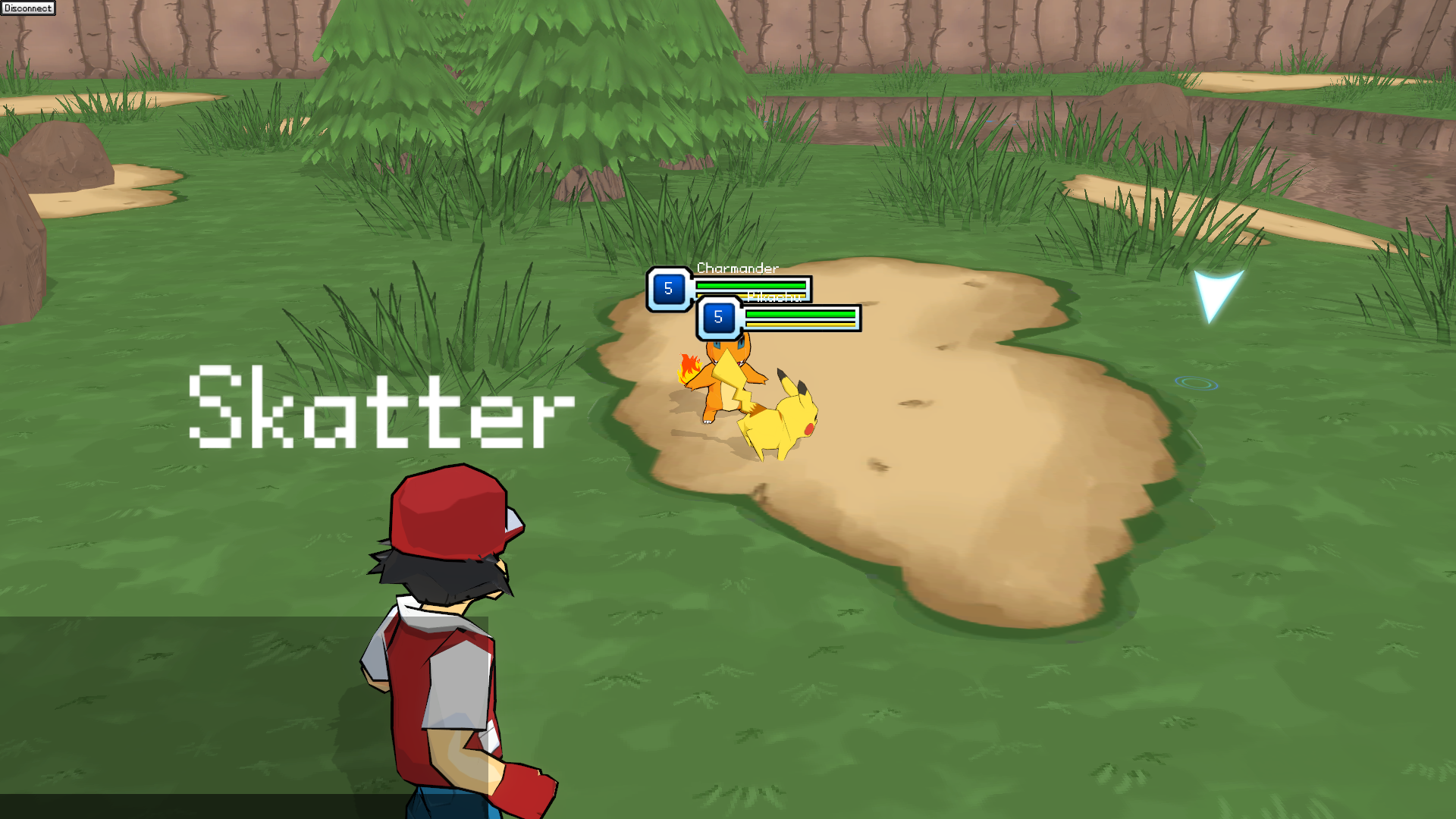 Now that you know how to move, let's look at attacks:First, each pokemon can know no more than 4 attacks. For this preliminary playable build, we've taken the liberty of selecting those for you. To use an attack, simply select the corresponding key on the keyboard. some attacks require you to target. For those, after selecting the attack, you'll click the mouse where you want to attack.Pikachu's attacks are:

Battling an opponent means you'll have to make use of what your skills do, as well as both your HP/Stam and your opponent's! Keep track of your enemy's location relative to where you are, as most attacks (all attacks in our preliminary build) have limited range.Status ailments, while not yet represented in the pokemon nameplates (future update), are also important to take note of.First, there's paralyze.Paralyze has a chance to cause the pokemon to be unable to move or attack. At the moment, this can only be caused by Thundershock or Thunder Wave.You'll know your pokemon suffers from paralyze when it seems stunned and has a lot of electricity around it, like this:

Then, there's burn.Burn deals damage over time. What's more, when burn hits, it will interrupt any attack that a pokemon is trying to perform.Currently, burn can only be inflicted by Ember.You'll know your pokemon suffers from burn when it takes damage from being on fire, like this:Type MatchupsWhile there are only two types of pokemon in pokegen at the moment, type matchups DO still play a factor.Notice the damage that Pikachu, an electric-type pokemon, using Thundershock, an electric attack, deals to Charmander here:

Now let's look at the damage coming from the same Pokemon and attack combination, but against ANOTHER Pikachu:

Wow, what a difference! Notice the Not very effective... text, letting you know that this type of attack probably isn't the best idea against this pokemon.To learn more about type matchups, Bulbapedia has a great type-chart here.

Critical HitsIt is also possible to score a critical hit against an opponent, dealing more damage than the attack normally would.Let's look at Charmander again, being struck by a normal Thundershock:

Now, let's look at the damage done by a Thundershock that happens to deal critical damage:

Notice that it says Critical! to let you know you've dealt some extra damage here! What a sting!Oh no! Pokemon fainted! Looks like you're going to black out, since you're out of useable pokemon! 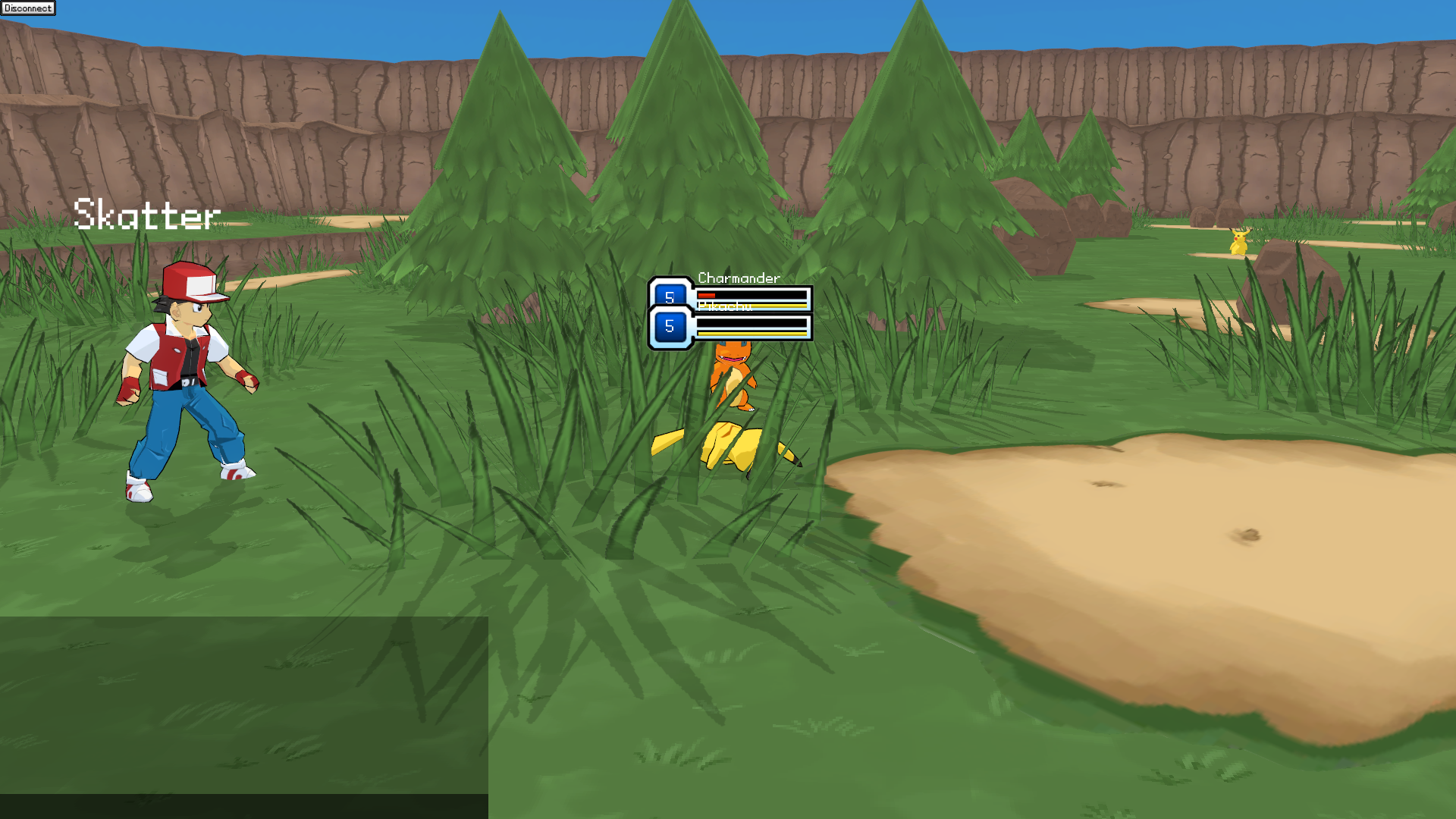 Haha, no not really. You'll just hit TAB to recall your pokemon for now, and it'll be as good as new!

Far in the future, recalling your pokemon won't heal them, instead you'll have to rely on Pokemon Centers. But for now, it'd be awful to have to rely on something that isn't there, right?So you've learned to battle, what else?At the moment, this is more of a sandbox to let new trainers get a feel for pokegen mechanics. However, you can chat with each other, as well!Notice that there is a chatbox in the bottom left corner of the screen, outlined in yellow here:

When your friends or rivals reply, you'll see their messages in the same window, like so: 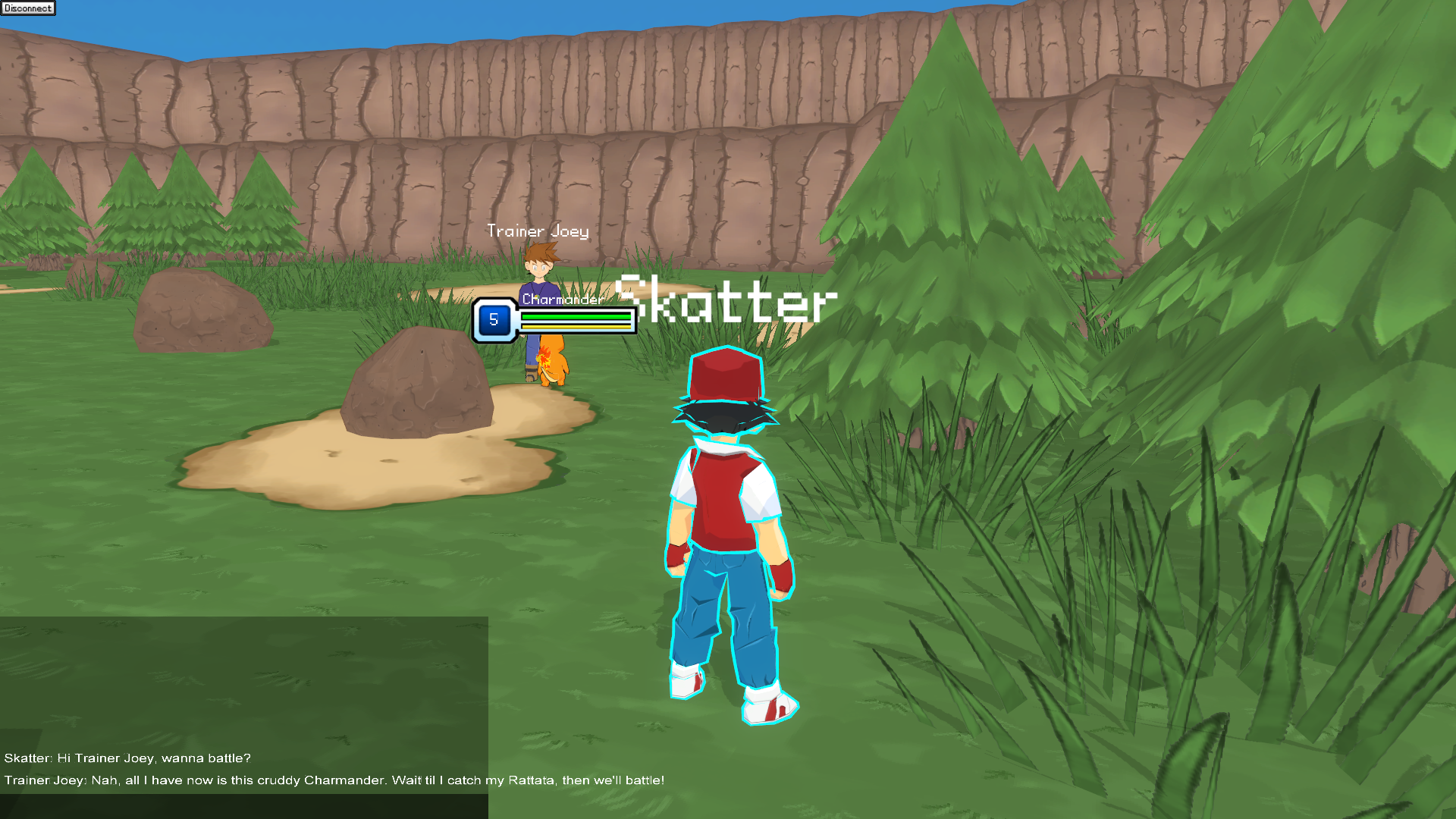 Okay, so how to I take a break?When you want to leave a map/server look in the upper left corner for the disconnect button, shown below:

Just press that button and you'll be taken back to the starting screen.Here, you can either reconfigure and go to another map, or if you're ready to quit, simply select the quit button to be taken back to your desktop.

magnifico really liked your idea and would also like to make a suggestion for jogo.A my suggestion is that the player could use two pokemons only a BATCH only to follow it and not for a battle against a two pokemons would be very appealing

for my pokemon atack only work the button 3 what should i do?

From page 3(this might be helpful to others with the same question!) here is an excerpt:

"To use an attack, simply select the corresponding key on the keyboard. some attacks require you to target. For those, after selecting the attack, you'll click the mouse where you want to attack."

how do you report bugs?

My friend cant join my server

Use Hamachi/or start a LAN based server, i had the same issue a few days ago from trying the play over the internet

Try to google "Hamachi", the unmamaged one is enough to play PG over the internet

It is really easy to set up and install, and it works like a charm, hopefully this helped :D

Thanks, it seemed too simple anyway

Ive been trying to connect with my brother (we have the same IP address) by creating a server name and trying to connect to that server.
We downloaded and installed hamachi and i created a server, he connected, and we tried the same thing again on pokemon generations, but it wouldn't work.
Am i missing something or doing something wrong?
Thanks :)

actually i made it work by using the IP address provided by Himachi!

How does one install this??

how do i join?

I can't seem to be able to use my name on multiplayer. When I type my name and connect, all it says is "Player"

wanted to know how to play because my only appears the pokemons there we caught them, but have a place to go, if it continues I think unfortunately delete the game and not something else appears no option to choose the pokemon already come with any and when I duel against other not attack others!

How do i play this game or get it?

So many people have wanted this for a long time. Even if Nintendo do eventually come along and shut it down I hope they take a lesson from this and maybe actually apply it.

Just messed around with the demo which true needs a bit of fixing (if you heal your pokemon on single player it locks up and needs reset, you also lose your last caught pokemon) and battles are still very buggy and unbalanced. However this is a start and so far it's promising and nicely presented.

Could someone tell me how to connect to a server , i put in the id and the porter , but it dosen't work ? Help Please!!!

Since when is needed hamachi for multiplayer?