A couple of tricks to get more immersive environments through the Unity Particle Systems.

Posted by ErYnIs on Oct 8th, 2019 - Intermediate Other

Getting to transmit certain desired sensations in the scenarios of a game is not only limited to the choice of appropriate models or good lighting, we must accompany it with a series of “environmental effects” that at Fulvinter we have emulated through the Unity ́s Particle Systems. This article is not going to be a tutorial of how they are used, but of the keys in the configuration of each effect on the sensation that we were looking for.

This fog is located at the beginning of the level, it is an area that claims to be closed and mysterious. Do not forget that we are inside a glacier, so we look for a dense and heavy fog, which gives the feeling of cold.

To achieve the cold effect, a very “cloud-like” texture has been used, this gives it the appearance of fog and makes it stand out. The heaviness of the fog is achieved by giving the texture instances a slow rotation effect without translation. The emission geometry is a cube, since being a set of square tiles is the option that best allows us to control the area of ​​effect of the particles. 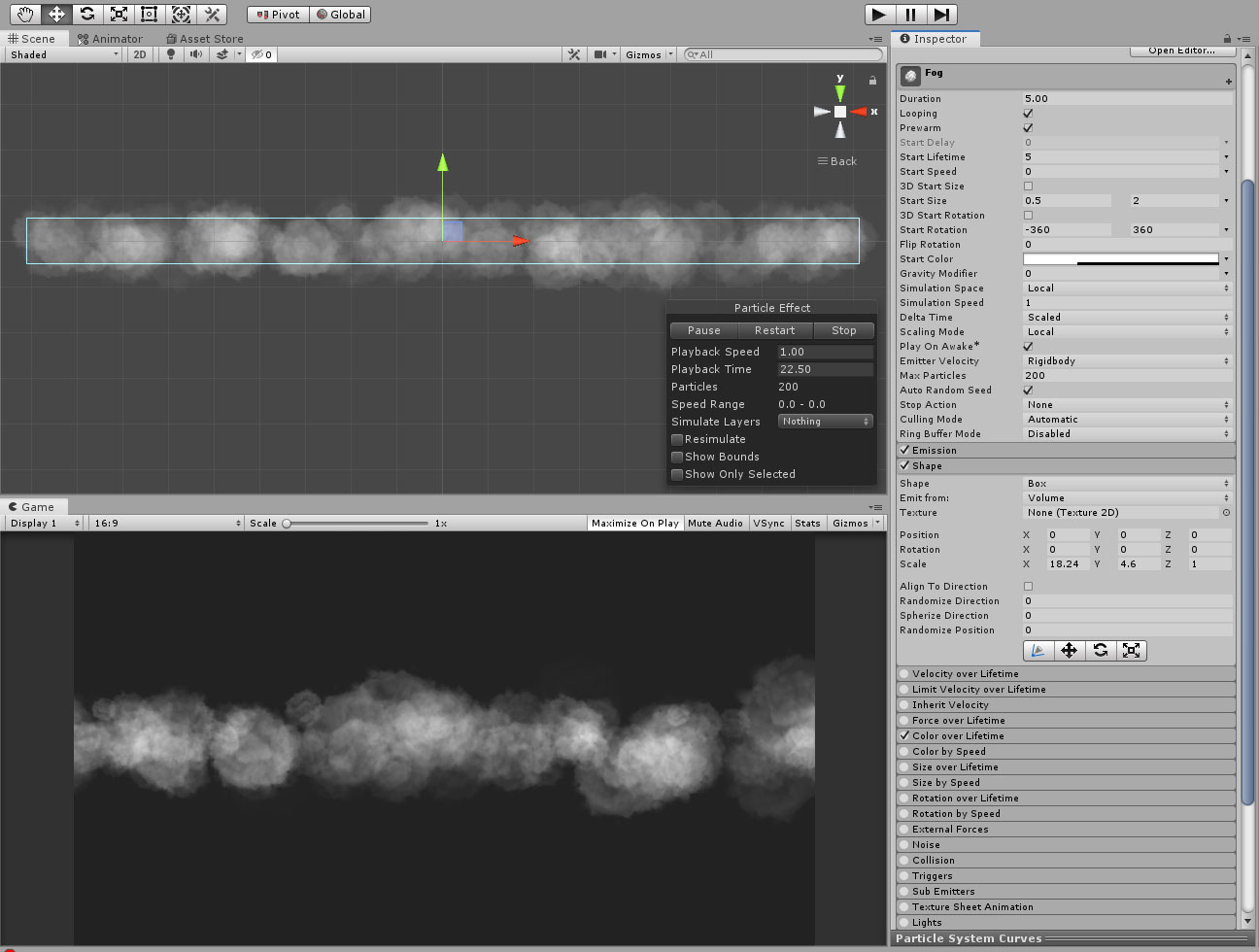 For the main menu we have set up a scene where you can see some of the islands from the protagonists' Drakkar. The clouds are used to enhance the feeling of vision amplitude and give movement to the composition.

The clouds are a bit the opposite of the fog we were looking for. To look ethereal, the texture has to be subtle because we don't want it to stand out. In this case we wanted to show a cloud system affected by a rapid wind, so we will apply a horizontal translation to the particles (with the Force over Lifetime modifier) ​​and no rotation. 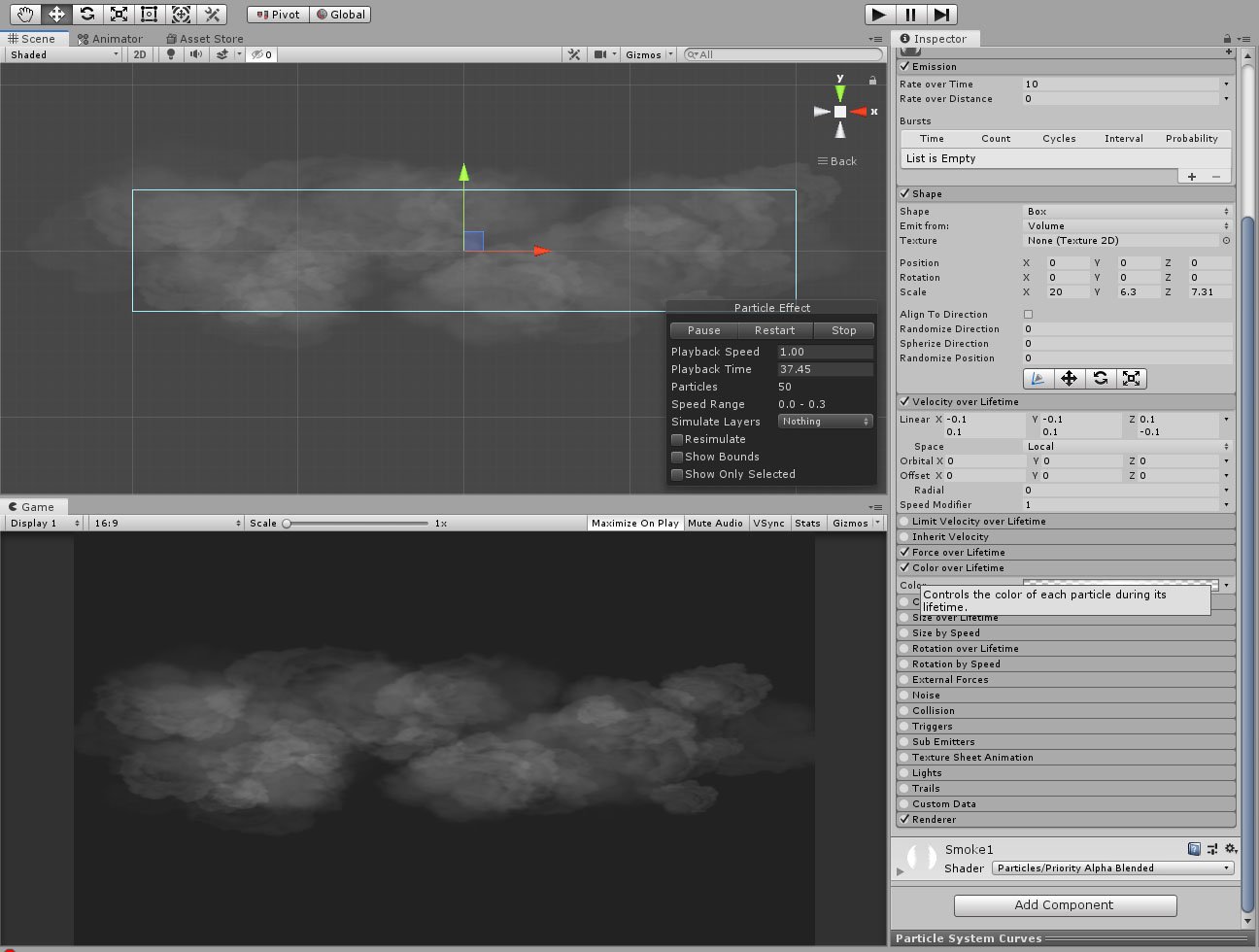 The arrival at the first level tree is a special moment, which claims to have a certain mysticism. We wanted to promote its presence and volume through the fall of its leaves.

To make the leaves we have used the same texture that the modified tree model carries for the shader of the particles. We bring lightness through slow rotation and translation and realism by applying a slight noise in these movements. To promote the volume of the tree we have started with a cone-shaped emission geometry that allows some of the leaves to get very close to the camera, breaking the 2D game feeling. 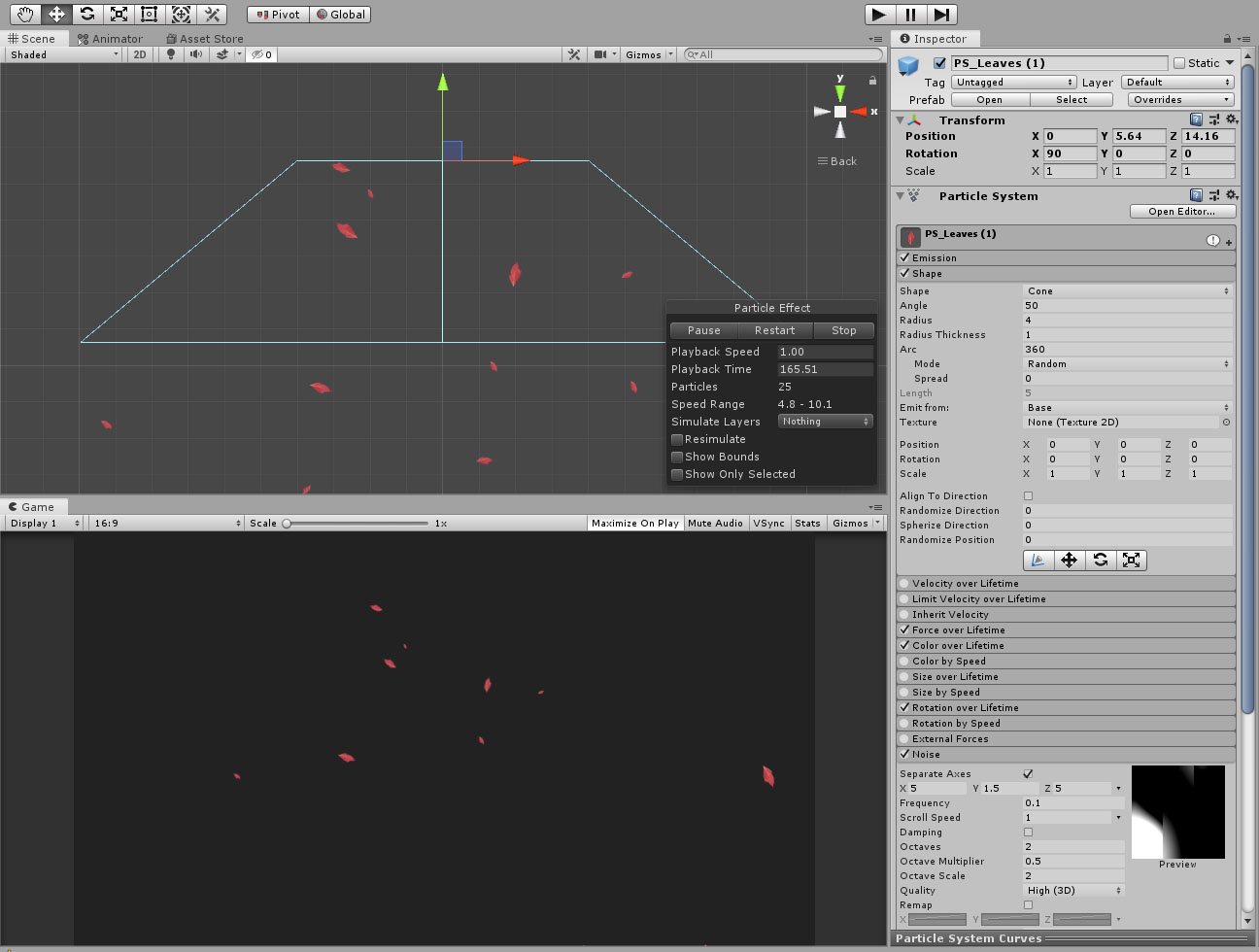 Upon reaching the top of the glacier, the level opens, leaving us in the outdoors. We encourage the opening by giving a reference of scale with the mountains in the background and the feeling of lack of protection through a snowstorm.

The most remarkable thing about this particle system is to look for the gusty wind effect that a storm has. We have achieved this by providing random wind forces on the particles, combined with their translation. On the other hand, we have generated emission groups of concentrated and separated particles, making the falling of the flakes not continuous. 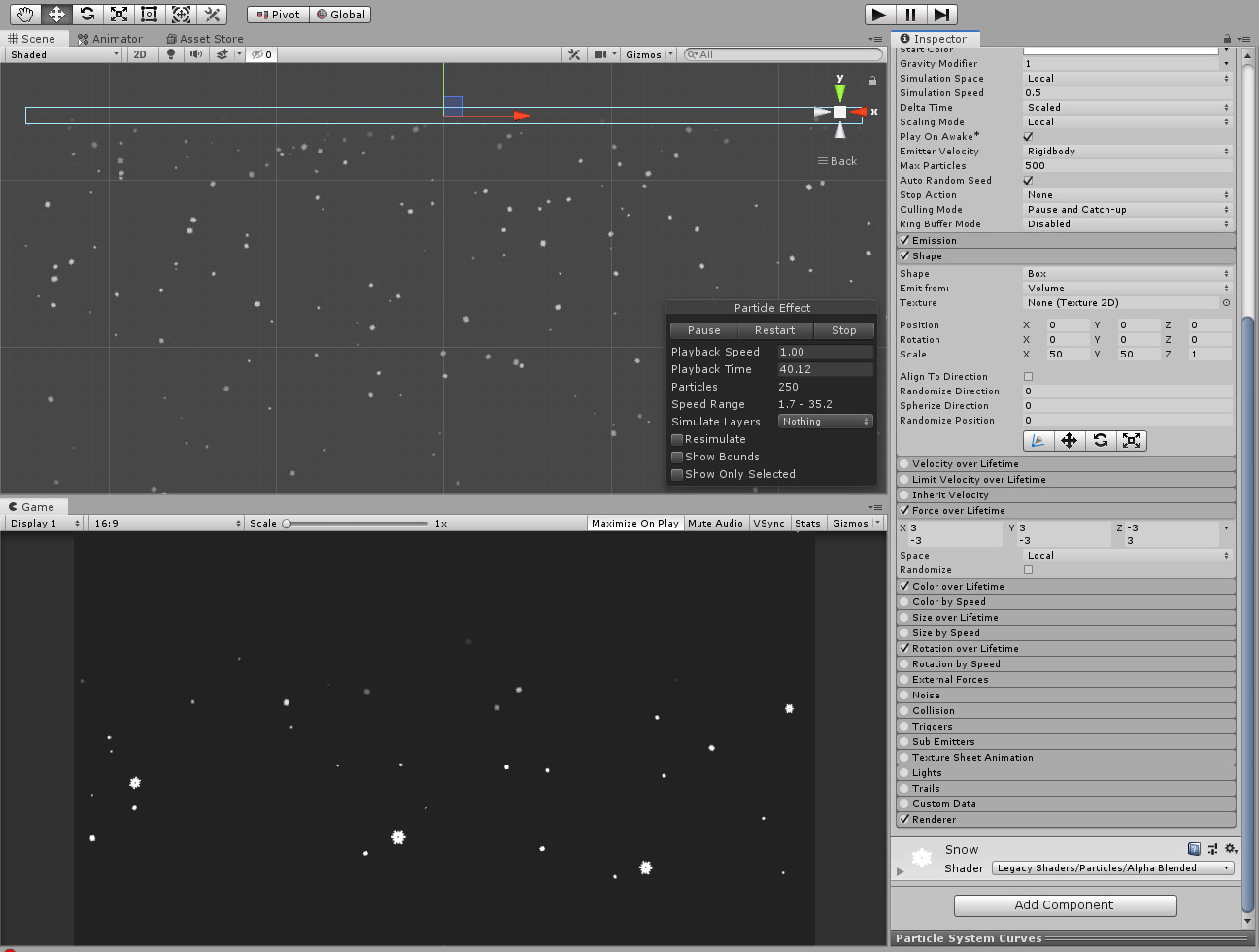 In the final scene of the level we wanted to contribute the importance and majesty of facing a final boss. We have achieved this through volumetric light rays located across the scene.

In this case we have not used a particle system but we have taken advantage of the functionalities of some of the shaders with which they are usually made. In this case, we have applied an additive particle material to simple cylinders located on the scene. Being an additive material, other lights do not affect it, it is semi-transparent and gives the sensation of emitting light when the different planes of the cylinder overlap in the chamber. It gives the feeling of having a gradient, being a 3D object allows movements of the game camera without appreciating the "trap" and adds light to the characters when they pass behind these "tubes of light". 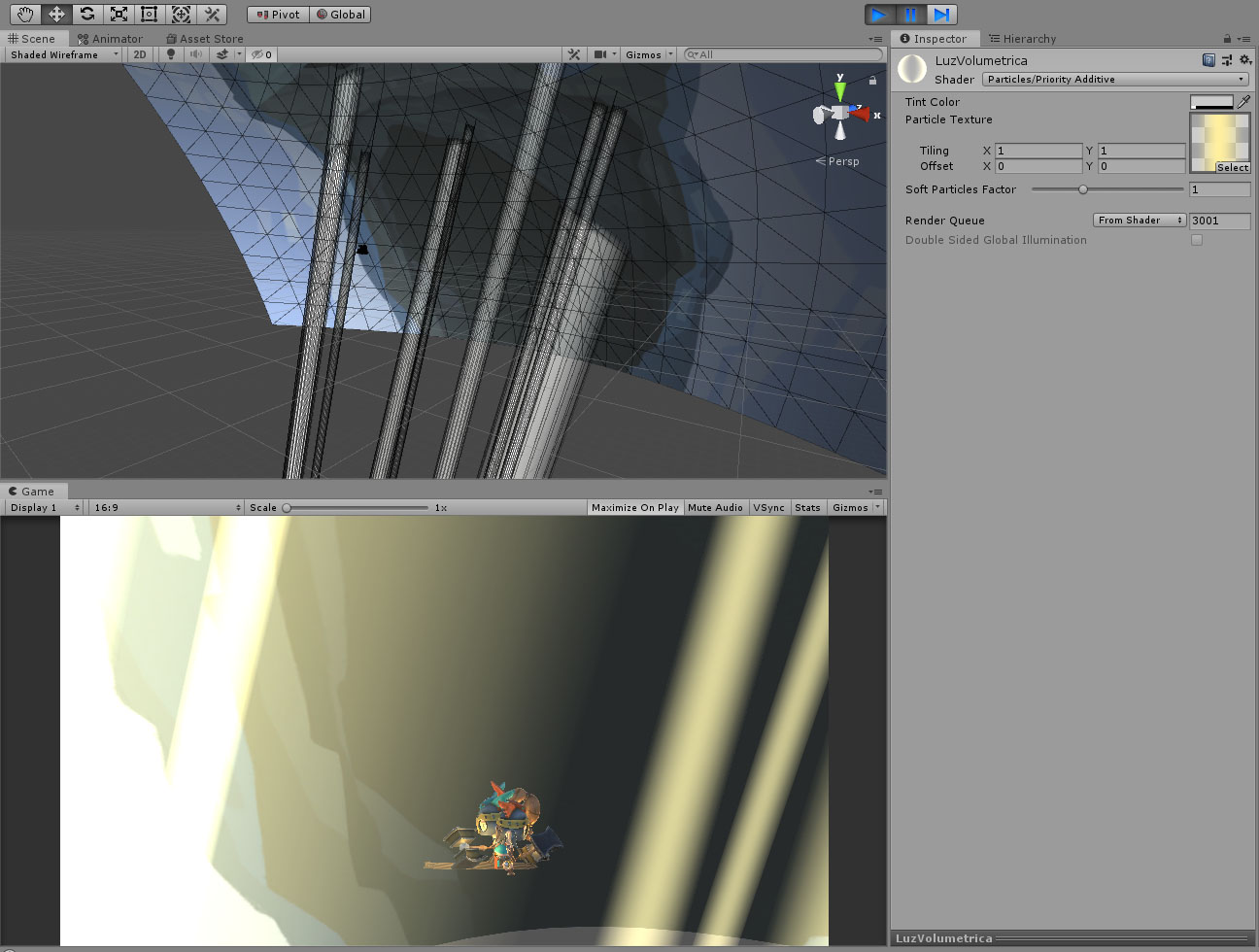 I hope you enjoyed it. See you!