Today I am gonna give you some explanations on the way I used Unity's objects and Dijkstra's algorithm (C# Unity code attached) to build the neighborhood relations among provinces, and to provide the game engine a way to obtain the shortest path between two provinces.

Posted by DrHogan on Sep 27th, 2015 - Intermediate Client Side Coding

Emiliano here! Today I am gonna give you some explanations on the way I used Unity's objects and Dijkstra's algorithm to build the neighborhood relations among provinces, and to provide the game engine a way to obtain the shortest path (in terms of walking distance for the troops) between two provinces (given that all the crossed ones but the target one belong to the player).

First of all, in order to implement the provinces neighborhood and the attack possibilities, I decided for a graphical approach. It would have been possible to manually write down to each province file the allowed attack paths and the provinces neighboring each province (the attacks have different lenght durations according to the geography of the terrain and sometimes are not possible as for example due to obstacles like rivers), but it would have been messy and it would have taken forever.

I therefore decided to go with a different (and easier) approach, that allows at the same time to configure the graphic look of the attack arcs (the red arrows) on the UI and to initialize for each province the correct data. 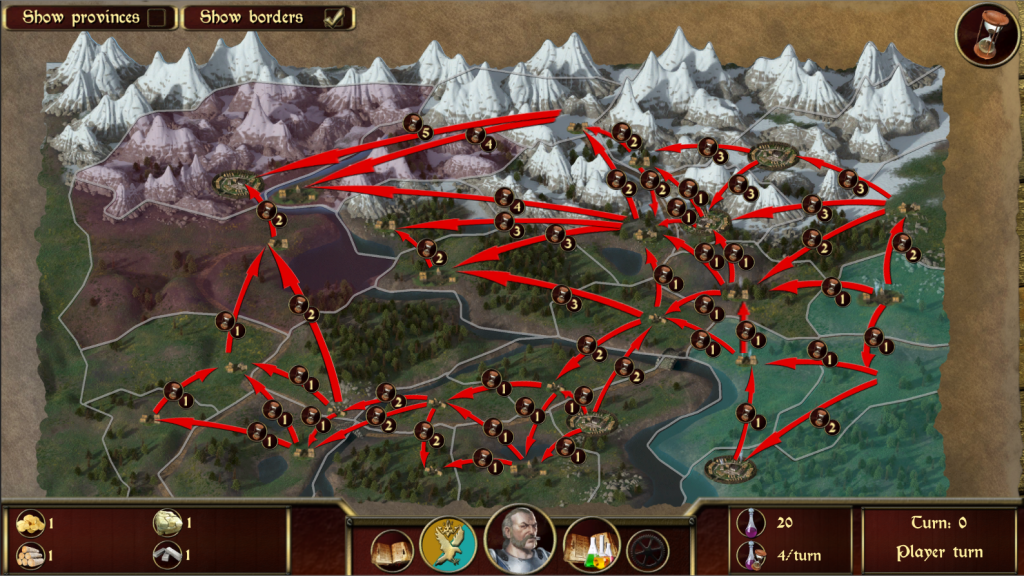 Starting from the first province and until the last one, for each province possible attack arc (between the province and a neighbor) I build a simple GameObject containing the arrow (already scaled and pointing from province A to province B), an UI Text containing the length of duration required for that attack path and a couple of additional UI elements just for the look. Each onbject is then name provinceAID-provinceBID (e.g. the attack arc from province 0 to province 1 is named "0-1").

The last two elements are vital for the following reason. I am building up monodirectional attack arcs, but those same arcs will have to be used both ways in the game (so if province 0 can attack province 1, province 1 can also attack province 0). By swapping the sign of the X of the local scale for the arrow transform, we can indeed invert the arrow direction whenever we want to change the attack direction. Storing the original X scale allows us to store the information on the original direction of the arrow when built.

Once each AttackArc is built, I set its game object to active(false) (and so it will be set until I need to use it to plan an attack route) and we store the AttacArc class instance in a Dictionary structured this way :

That means that each attack arc will be referenced twice : Once as <provinceAID,<provinceBID, AttackArc>> and once as <provinceBID,<provinceAID, AttackArc>>. A bit of redundance in the data structure here will be extremely helpful later in determining in a quicker way all the attack arcs for a single region, no matter if in the original object it was used as attacking or target one. 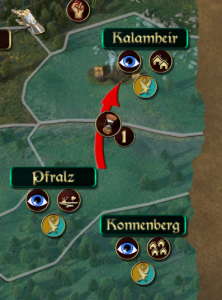 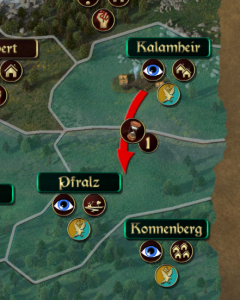 For each province, )I will have a dictionary that quickly references (with O(1) complexity for searches) another dictionary whose keys will be all the possible attackable provinces, and whose values will be the related AttackArcs objects (that contain all the visuals and stats data needed to use them).

Before going furter, I go through the whole structure and we assign to our provinces (kept in a structure in the main game engine) all the neighboring regions that are accessible through attack arcs (each region just has a list of integer that contains the key ID of each neighboring province).

Now I write a couple of short methods to do the do the following operations (mail me if you need help but it shall be quite trivial) : 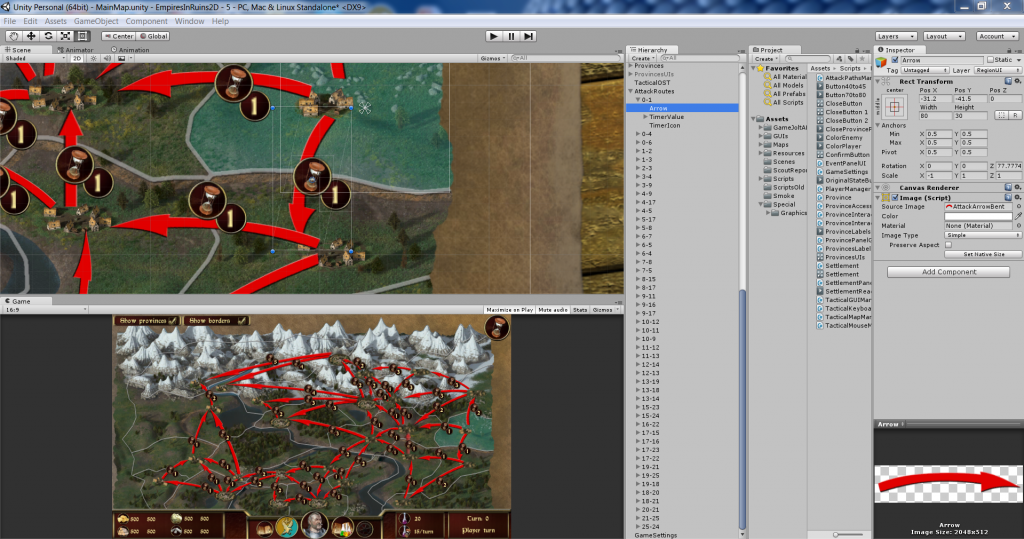 Structure of an Attack Ark object

In order to grant a quick management of all the currently displayed arcs (later on I will use the built graph to show full attack paths that go through multiple arcs across multiple provinces), we keep a list of KeyValuePair<int,int> where the two integers are provinceA and provinceB (there is no risk of duplicates as you can't have simultaneously the arcs provinceA-provinceB and provinceB-provinceA.

Now all this is currently stored in a datastructure whose script has been built with the singleton pattern to make it quickly available from any class that might need it. The next step (coming soon) is to properly finish designin the attack graph and build the navigation algorithms. They will have to take into account the duration of each arc in order to build the shortest attack routes, and of the owner of the provinces on the way (the enemy would not be that happy to let you troops transit through his provinces).

The next step is to provide the engine a quick way to determine the shortest path (in terms of walk duration, the number shown on each arc) from A to B given that A is the province used to start the attack and belongs to the player.and the whole provinces on the way belongs to the player.
The problem is trivially solved using Dijkstra's algorithm for the graph navigation shortest path (for technicality's sake, the graph is a undirected and weighted one, and you can just look at the wikipedia page for the theory). I propose here the implementation I did (Unity3d, C#). Several features are bound to the game engine, but the main algo concept should be quite quickly easily understandable

I also uploaded a little video to show the results (the whole attack engine and graphics are still far from complete and for the testing it always uses the same province (Kalamheir) as attacking source, but it proves the results of the attack path building so far)

Well guys, that's for now. I hope that this devlog entry might give you some ideas on how to solve some problems you might be facing. I am definitely not saying there are no other ways to do what I did (possible even better ones :) ) but this was is now working really well for us, so, why not?