This brief introduction will give users a grasp of how music is handled in Anomalies. The topic comes in response to some users' confusion of why the game does not sound like the associated music albums. For reference there are currently five albums of music recorded from Anomalies, and they are available on Bandcamp, and also if you purchase the game on Steam. These albums are all, indeed, recorded directly from Anomalies, but getting the game to make more musical sounds can require a bit of extra work.

The first major influence on how music works in Anomalies is the "Harmonious Sounds Only" checkbox. This is found in the Options Menu. On the title screen, you will see three buttons: Creative, Options and Exit. If you are already in Creative Mode, press ESC to access the main menu, and then the Options menu. 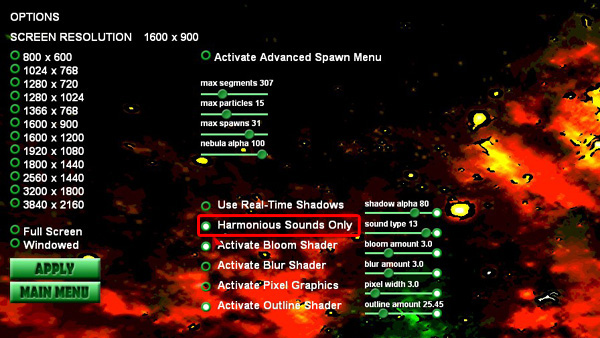 By selecting this checkbox, the user will ensure that the sounds produced by Anomalies will be selected along the common musical scales that most musical instruments are tuned to. Otherwise, it will use a completely different algorithm to select the frequency in which sounds are played, and these will result in what are known as "micro-tones." While this is a fascinating subject in itself, it is also far too complex to cover here, so I will just say that the game will not sound harmonious if you do not check this box.

The next most important parameter is found in the game's Spawn Menu. This is the large, green menu that appears in the game's creative mode.

Fixed Angle:
Under the "Branching" section of the spawn menu, there is a slider entitled "Fixed Angle." By sliding this all the way to the right, it will set this parameter to 1. Using the lock button (to the immediate right of the slider) you can lock this parameter so it will not change when you click Randomize. 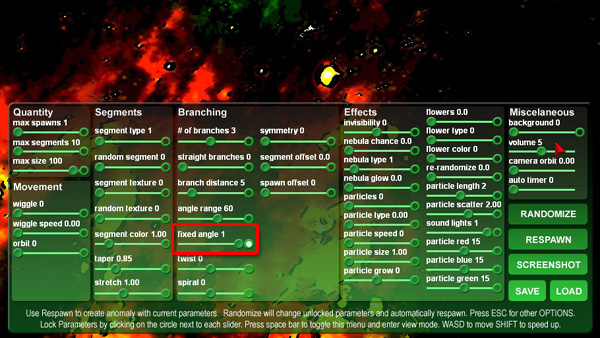 Visually, this parameter will fix the angle at which new segments will spawn, when compared with the segment that spawned them. However, it also has a major influence on how sounds are created. When Fixed Angle is set to 0, sounds will play randomly, and will not follow a repeating pattern. With Fixed Angle at 1, an anomaly will play a sequence, and then repeat the same sequence indefinitely, so something resembling a song will be created.

This tutorial assumes readers will understand the basics of how Anomalies works. However, as a quick reminder, changing parameters will only effect the anomaly (with a few exceptions) after "Respawn" is clicked. This will create a new anomaly with the new parameters. Be careful not to click "Randomize" if you are trying to manually set parameters, as they will be changed, unless they were locked. For a more thorough explanation of how Anomalies works, check out the Anomalies Demo Video.

Randomize:
The next thing I like to do when coming up with musical sequences, is to click "Randomize" a few times. If Fixed Angle is locked, I will be sure to hear only repeating sequences, instead of random patterns. It may take a few tries, but eventually I will hear something that takes my interest. Many anomalies produce slow, sparse music, that might not be very interesting at first. But a few clicks on Randomize will usually result in something a bit more upbeat. Randomize can be found on the right-hand side of the Spawn Menu. 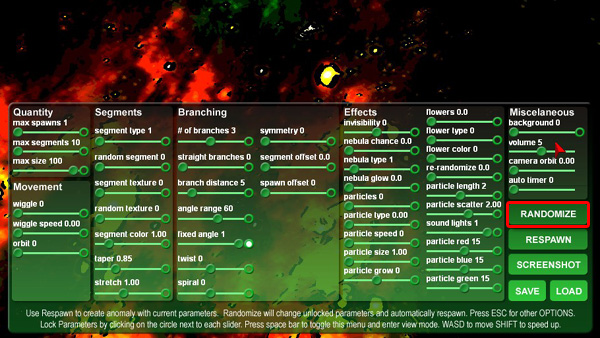 This is really a kind of open ended thing at this point. You are the best judge of what might be interesting or not. Also, it's rare, but occasionally randomize alone will result in something truly musical, and worthy of recording. Usually, this is not the case for me, and I need to tweak a few more parameters in order to get it to sound more musical.

Getting Anomalies to Sound More Lively

There are a few ways in which you can encourage your anomaly to pick up the pace musically. The parameters that influence the speed and frequency at which sounds are generated include the following: Max Segments, Wiggle, Wiggle Speed, Branch Distance, Angle Range, Twist and Spiral. Symmetry also has an important effect, but that will be covered later in more detail. 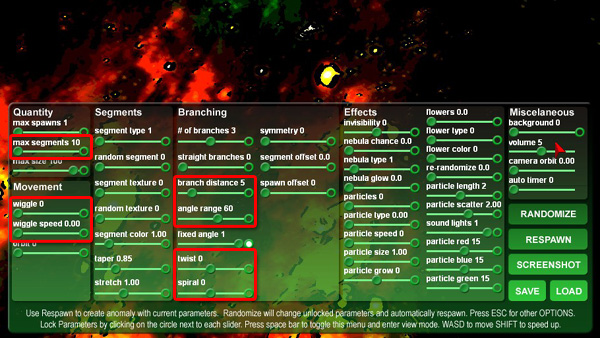 Max Segments:
In Anomalies, each segment holds a particular note. So, the more segments, the more notes. Be careful here, as sliding this to 1000 (or higher*) may cause the frame rate to crash, depending on your computer's specs. If you want to play around with Max Segments, it might be a good idea to turn off Wiggle, Orbit, Flowers and Particles, as these parameters will also impact the frame-rate.

Branch Distance and Angle Range:
These parameters will alter how often a note is played inversely. That is, the lower the distance, and the smaller the range, the more often notes will be played.

Twist and Spiral:
These will only have a noticeable effect on the sounds if Symmetry is set above 0. I will describe how symmetry works in the next section. For now, know that Twist and Spiral parameters will increase the frequency in which notes are played if they are further (either positive or negative) from zero.

Symmetry has a major influence on the music of Anomalies. If Fixed Angle is set to 1, as we described above, then the anomaly will play sounds in a sequence. Additionally, if Symmetry is set above 0 (1, 2 or 3) then the number of repeating sequences will increase to 2, 3 or 4.

Most songs don't simply repeat the same notes over and over, right? There is usually a repeating sequence for the main verse of the song, then a different sequence for the chorus and so on. Symmetry allows you to approximate this idea in an anomaly. 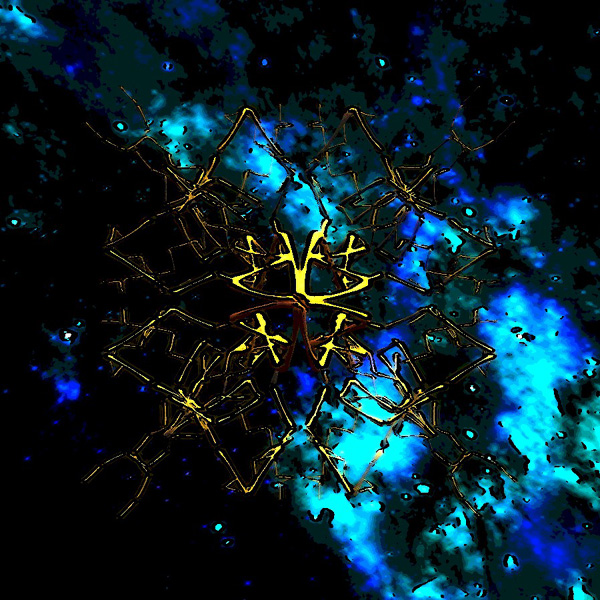 Symmetry behaves a bit strangely though. When there are more sequences in a particular song, it means that each sequence will be somewhat less dense. So each segment will not actually play in each portion of the song. Some segments will play in the first sequence, and some will play in the second. If you have more than two, then some segments will wait until the third sequence to play their note, and so on. So, while symmetry allows for more musical sequences, it will also produce less complex sequences than a similar anomaly without symmetry.

This is mitigated, however, by other factors. Twist and Spiral will actually allow notes to play in more than one sequence. Due to the way in which this was programmed, these notes will be the same in each sequence, so a song with several sequences, with Twist and Spiral set higher (or lower) will have three sequences that sound somewhat similar. Where a similar anomaly, with twist and spiral set to 0 will have three sequences that are less densely crowded with notes, but that sound less similar.

Flowers are spinning shapes that circle around a segment of an anomaly. They give the user more to look at, and also influence the sounds an anomaly produces. When flowers are active, it will make the segment on which it appears to play more than one note. Depending on how high the flowers parameter is set, it may play two or even three notes at a time. These will be notes that are harmonious with each other, so it will add a little more texture to the song. 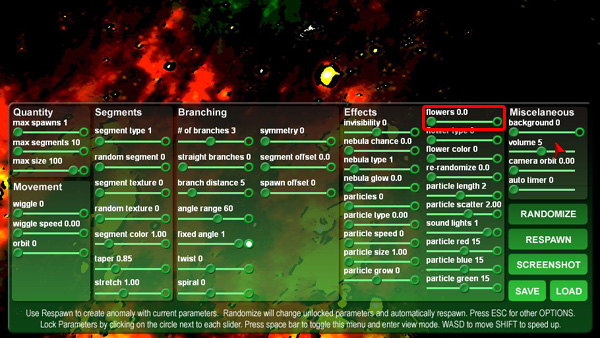 Again, flowers introduce a number of additional 3D game objects, so they can inversely effect your frame rate.

I produced a short video demonstration of the various musical parameters that have been described here. If you feel like you need a hands on understanding of how to make music with Anomalies, check it out:

There are more details about how music is generated in Anomalies. However, what was presented here should be enough to get anyone started. Briefly, I will mention that clicking on a segment will toggle it's ability to play its note. Also, using the number keys, you can actually play along with your anomaly, like a small piano keyboard. Finally, many of the parameters mentioned here can be further modified with the Advanced Spawn Menu. This is something you can activate in the Options Menu.

Warning about the Advanced Spawn Menu
The Advanced Spawn Menu is for advanced users. It will allow you to manually type in amounts for some of the game's parameters. Note this is still an experimental aspect of the game. You could easily crash your game, or even computer if you are not careful with this tool. However, setting max segments to 5000, or wiggle speed to 15 will definitely change the way an anomaly looks and sounds.