Right then, it's that time again and unfortunately for you, blogging duties have fallen to me (Binky). I'll do my best not to make an utter pig's ear of it. Last time I did one of these, I ended up interviewing Marina but since she's busy beavering away on some lovely new container object tiles and other assorted map goodies, I guess I'll have to interview myself.

Right then, it's that time again and unfortunately for you, blogging duties have fallen to me (Binky). I'll do my best not to make an utter pig's ear of it. Last time I did one of these, I ended up interviewing Marina but since she's busy beavering away on some lovely new container object tiles and other assorted map goodies, I guess I'll have to interview myself.

Hello Andy. So, tell me what you've been up to this week.

Hello. Gosh. First off, I highly recommend everyone watches this video of Mendonca's Project Zomboid Worlderizer - a rather fabulously awesome map generator which creates landscape data and road networks and all sorts. It's all rather brilliant if you want to start modding huge custom maps but don't fancy putting every tile down by hand. We're thrilled to bits to see tools like this in development and this, plus the awesome work EasyPickins has done (see this blog post) should really empower modders to make some terrific map mods!

As for me, well, we gave a sneak-peak at the old crawling zombies last time but there are additional animations you need for that other than simply the ability to crawl.

Indeed. Also, if a standing zombie is clubbed in the kneecaps, falls to the ground, and becomes a crawler... well, the trouble with crawling is it's only really effective if you do it facing the ground. Otherwise you'd just be waving your arms in the air. So anyway, you'd need a zombie to be knocked backwards and then get from that position into a crawling position to avoid having to have a specific knock-down animation where the zombie ends up in a crawling position. Because that would mean that you'd know as soon as they were knocked down that they'd become a crawler and there'd be no fun in the player having that knowledge.

So you're talking about transitional animations?

Er. Yes. I suppose that's a more concise way of putting it. You should be writing this, not me.

We'll swap halfway through. So I guess the obvious question now that crawling zombies are being addressed is what about those gruesome crawlers you get in films, where they're only a torso and entrails? Is this a possibility?

Curse you. But yes, that would be good wouldn't it? With the old hand-drawn sprites, we drew them with this in mind – having the head, torso, and legs as separate sprite objects so we could decapitate people or remove legs and replace with gore, etc. We never got as far as that in-game with the old system before switching and with the new sprites as they are, the base bodies are all one complete sprite – there's no separate heads or legs. So at the moment it's not possible to turn the legs off. However, since crawlers would only need a subset of animation frames the overhead of having a specific set of zombie frames for crawlers is not massive, so I would put money on us expanding the crawlers beyond a regular zombie on the floor crawling at some point.

Marvellous. So what else have you been up to?

I've also done a bit of work with Romain (who has been doing a tremendous job) on tarting up the skill screen which is starting to look pretty good now. It's one of these things that we'll continue to refine as we test since it's important that it's clear to the player what's going on, how skills are levelling up and why. 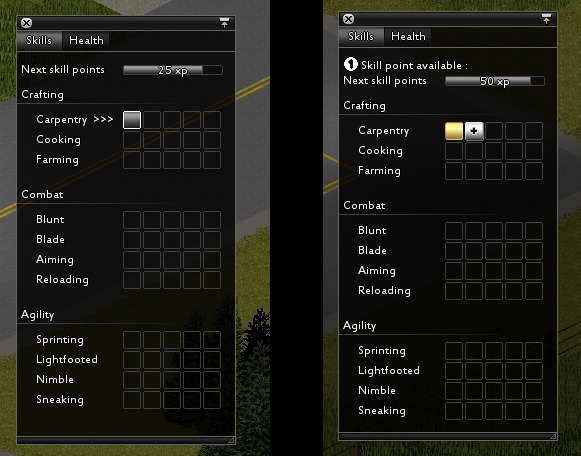 There's still a few issues to sort out as you see it there - those little '>>>' chevrons, for example, indicate a skill that's levelling up faster than normal. These will be replaced by a graphic either superimposed on the actual skill box, or to the side as you see it here. So this sort of represents 80% completion or so - we need to test this screen in-game to see how well it works. It's still possible that the way skills function could change which would mean this screen would need to adapt. It's one of those things that needs frequent evaluation as more skills go into the game.

On top of that this week I have, of course, watched Mondoid which I highly advise everyone else to as well as Mathas' continuing Project Zomboid "Let's Play"s.

Thanks! Also, I'm quite keen on finishing the... hang on, this would work better as a question.

So tell me Andy, is there anything mid-development that you're itching to get in game?

Funny you should mention it, but yes! I started making male equivalents of the female costumes so that male characters could wear skirts – essentially making each costume a unique costume across both genders. At the moment there are two shirts – a long-sleeved shirt and a vest, and the male and female characters have equivalent although not quite identical versions. This needs to change so that if a male puts on a blouse, it's still a blouse and doesn't magically transform into a male shirt. The same goes for skirts not transforming into trousers. It might be a small thing, ultimately, but I think it's important so that clothing is clothing and not magic clothing. One of the benefits of having the 3D character assets is that to apply female costumes to males and vice versa is a small job compared with the previous system of having to draw all the frames of every costume twice.

So aside from clothing, how much customisation of characters are we talking?

Well, we've already shown some stuff about the new hair and beards. We've got a few glasses made but these aren't in-game yet, but I'd like to get them all finished off reasonably soon. As far as the base sprites go, at the moment there's a couple of skin tones per gender (which we will expand later) and the males have an additional body hair or no body hair option.

Males get body hair? What about females? What's the equivalent?

Er yes. At the moment there is no equivalent because I'm buggered if I can think what the equivalent would be. Males get body hair and beards extra, so it's currently an unbalanced amount of customisation which is not ideal. There's also no matching zombie skintones for the human skins – zombies are all pale-skinned – so this will also need expanding. We're also playing with the idea of sprite-based blood overlays – something which can be drawn on top of the sprites in-game so it's possible to see the more extreme injuries visually which is particularly good for NPCs for whom you can't open up a health panel like you can for yourself. If this works well, then it might be something that would work for zombies too, so where at the moment we have a few zombie skins with differing blood for variety, we can cut that back to just skin tone variety and do all the blood as an overlay.

Smashing! Thanks for your time, Andy. Is there anything else you'd like to add before you go?

Only that this Royal Edinburgh shortbread goes tremendously well with the cup of tea I have just made. 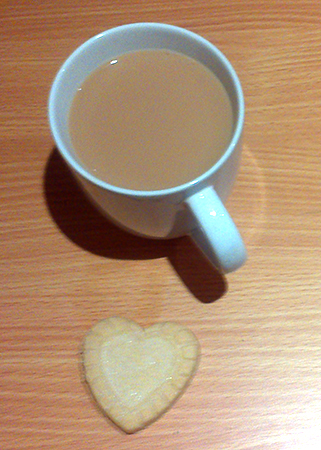 Character customization looking good! I like the plan to make it roughly equivalent between genders, Always been a pet peve for me about character creation. Keep up the good work and hope to see some news about co-op!

"Males get body hair? What about females? What's the equivalent?"

Does the carpet match the drapes?

waz up! tracking this

lol Could always give woman options for different breast and backside sizes. Though again I guess thats something for the guys too! hehe

Or just give women more hair-styles to choose from.
Also, anyone else tossing money at their screen and bummed the mod isn't finishing faster? =P

I see the idea of body hair useless, it's just a waste of time drawing something that is going to have all the time a shirt on it, anyways i like that you guys get on that level of customization but is just an opinion, not a complain.
can't wait to play asdlkdmalkmdlkasd.

I have been wondering when the next update will be and wether it will be anytime soon. Love the game but the new things are making cry inside because they are not ingame yet.

I'm going to stop tracking this so they can't tease me anymore. See you in 2020 when this update comes out!

This game looks like it's going to become something great when the update comes out!

lol this game gets more like the sims every update, why didnt maxis think of making a zombie survival mod for the sims :P
Btw will be waiting all year again for some kind of update, 1 year ago i thought this game was been released
but now we speculate on the chance of a small update
Come on Indie Stone, just give us something to keep us pateint, im sick of watching PZ mods/updates on youtube now!!!

I have a question, with the new system and this whole RC3 update(IM SO FRICKEN EXCITED) will project zomboid still be able to run resonably well on middle-low end computers?

That's is the major update... The tile rendering system.

how do you update?