Welcome to our IndieDB page for Zombie Hunter. In the next series of blogs we will tell you about our creature and how we are building it.

Hi and welcome to our IndieDB page!

We are an independent game development team based in Ukraine and right now we are working on our debut project called “Zombie Hunter inc”. It’s a top-down shooter with elements of tower defense packed with action. You play as a hunter hired to protect your client from zombies. You are being paid for each walker you shoot and can spend your cash to purchase better guns. You loose if any zombie passes your line of defense. The free alpha version of the game is coming this December so you will be able to taste our creature quite soon!

The first trailer for Zombie Hunter inc is already on YouTube.

The game was largely inspired by a legendary Swedish jewel “Seal Hunter” and a unique zombie-rpg “Dead Pixels”. In this blog entry I will tell you about our “Survival Mode” and how it was influenced by its inspiration “Seal Hunter”.
There is some subtle magic in each of those games. When I first played Seal Hunter I was amazed by the way it hooked you with its simple and accessible gameplay while still remaining a very deep and challenging game. Any friend I showed Seal Hunter to, was late to school the other day having red eyes and shaking hands. Despite its pixel graphics (which was not yet considered “stylish” back in 2007  ) and arcade nature, the game grabbed your full attention and you could not resist but playing it even though you were losing constantly. Razor-sharp balance and well thought-out features left you no chances. The game is still being actively played until this day after its on-line remake that allowed up to 4 players to join into an endless seal rampage. It currently has over 55 thousand registered players. Do check it out, it’s free!

I played Seal Hunter all these years, being a pro and a dedicated fan and I saw how badly players wanted the sequel. But unfortunately for us all it never happened and never will, because the authors of the game have other work now and are not planning to create it. So one day I assembled a crack squad of two artists and a coder and now we are set to give the glorious game a worthy sequel.
We spent a lot of time thinking how we can push the game forward, while maintaining its core features. Seal Hunter was beautiful because it has everything that a great game must have and NOTHING EXTRA. It is a tiny game where every feature and every monster has endless hidden properties and immense potential. That is why when adding new functionality we tried our best not to overwhelm the game. You will not find waste in Zombie Hunter inc, it will be clean and polished, meaning that even when playing with the very same gun you will constantly catch yourself on a thought that you don’t know all the ways to use it. In future articles I will tell you how we balance our game to ensure endless tactics with stainless balance.

One of the main priorities of development is to make the game deep yet balanced.

Another area of improvement was graphics. I was poised to push its video quality to the limits and precisely for this purpose we created a powerful 3d engine, featuring skeletal and rigged animation, deferred rendering with unlimited dynamic lights, HDR bloom, highly detailed models with normal, specular and gloss maps, volumetric particles and FXAA smoothing. In future blogs I will explain how my fellow coder and I were able to build it in less than a month. But in order for the game mechanics to work, it had to retain it’s 2d look, that is enemies had to move with the same speed and have the same size no matter where they were located on the screen. We solved it adopting an orthographic projection and now Zombie Hunter inc has a stylish 2d look, while having access to all the cool features of the 3d graphics. In future articles I will tell you how we created Battlefield-3 quality of gunfire. 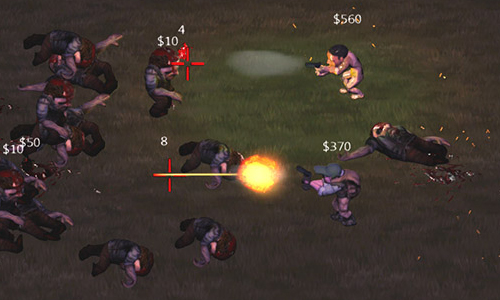 That’s all for this blog, see you next time!