What happened since I've released a 0.5 version of my turn-based tactic game Zemeroth?

Here’s my first video devlog ever:

I hope to keep these videos short and release them every week or two.

First, a tile under the cursor is highlighted now. Highlighting is disabled though on touch devices (by ignoring an event if its delta movement is zero). 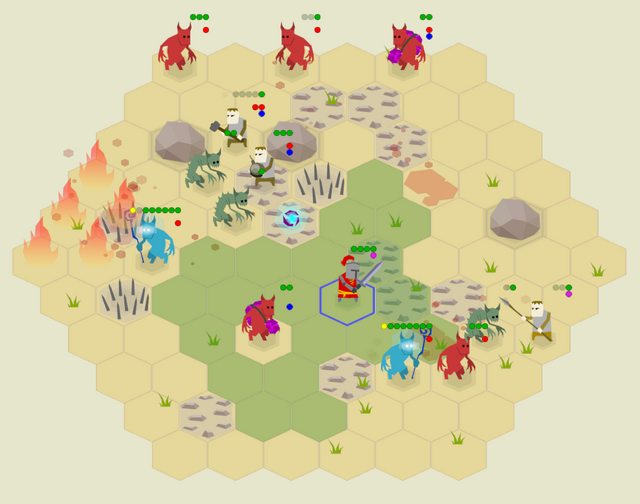 Next, agents now can be flipped horizontally to match their action’s direction. I’ve wanted to add this for a long time because sometimes units were attacking each other backward and it was weird.

A helper message is now shown when an agent’s move is interrupted.

Now agents have special sprite frames for some abilities. It’s a compromise between having real animations and only having static pieces.

Also, spearman will get special directional attack frames soon, because he can attack enemies two tiles away from him and it looks weird with completely static sprite sometimes.

There’re a couple of non-code updates too.

I’ve added a “Roadmap” section to the readme to show in which direction the project moves.

I also added a new “Inspiration” section with a list of games that inspire me to work on Zemeroth.

The game now has a text logo. It’s a manually “low poly vectorized” text written with the Old London font. Not sure if it really fits the game, but it’ll do for now.

I got the ozkriff.games domain (but haven’t created a landing page there yet, so it redirects to the devlog for now).