Unlike most RPGs, Copper Dreams will not feature Hitpoints or any kind of health bar. This article explains how a character's wounds will affect them in combat.

The Wounds system is a cornerstone of the Burning Candle ruleset, it's meant to enable pacing to your adventures and consequence to combat, as well as simulate actual types of damage. Because resting at clinics takes time to completely heal, the ailments you carry will shape your gameplay choices during missions. 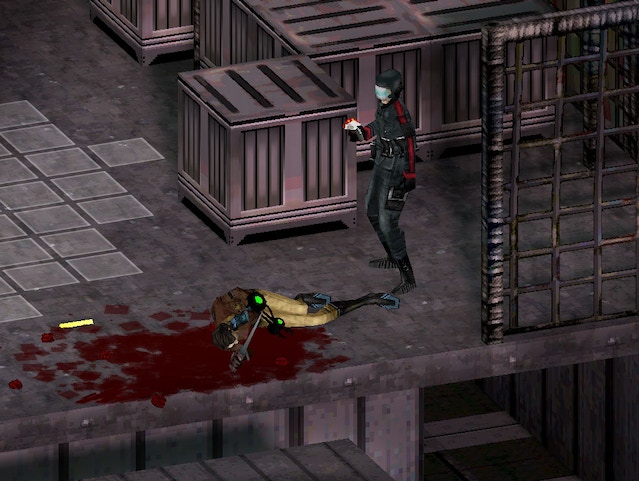 Your character's ailments are represented by three different bars below their portrait in the main HUD, accruing a full bar of ailments in any of these lead to death. You can see these in more detail on your character sheet, which will also automatically find any medical equipment you may have that could cure them out in the field.

The three categories of ailments that all different kinds of damage fall under are Lesser, Greater, and Mortal.

Every PC and NPC has a set number of ailments for each category they can receive before death takes them. There is a player advantage system with this though, in that a PC doesn't immediately die when a category is filled, but rather drops unconscious during combat. Another hit thereafter will kill them. So for example, a security guard might have a capacity of five Lesser Ailments, three Greater Ailments and one Mortal Ailment, which means if you setup your attack and roll with luck you might kill them with one mortal ailment, or a poorly planned and rolled attack may deal Lesser Ailments, but if you dealt five of those they’ll still be dead, regardless of how many Mortal or Greater Ailments they have.

When you deal damage, you will roll 2d8 plus any pips to get a damage output, which will then correspond with an ailment based on what weapon you’re using and which body part you hit. The ammunition or special abilities of a weapon will also influence the type of damage being dealt, or add an additional damage roll. For instance incendiary rounds for a slugger weapon will roll for both the ballistic damage as well as a separate fire roll.

The wound caps design a big part of the simulated combat, despite being an abstract number — unloading an entire clip into someone will surely always kill them by sheer number of ailments being aggregated. Because when an enemy emptying a clip into one of your characters does the same thing, you'll want to advise some caution when engaging. There are of course drawbacks to these kinds of tactics that are confronted from enemy AI and sensory mechanics. Flooding the world with bullets can be expensive (and certainly loud) so you're often better off with item uses like pistols with suppressors or chemical warfare, or using guerrilla tactics to always have the upper hand when you can.

While these charts of damage vary per weapon type they'll more often than not have a bell curve favoring Greater Wounds, and a lower chance of grazing an enemy with a Lesser Wound or critically ailing them with a Mortal Wound.

The infograph below shows an example of the breakdown of dealing damage with a ray gun: 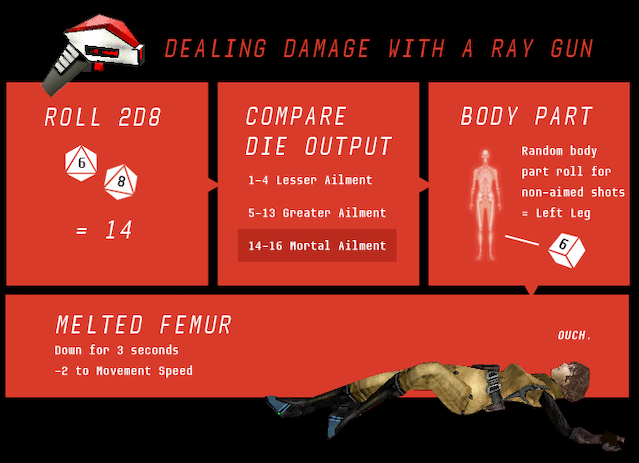 Unlike HP, which usually grows throughout a game as you level up in a more D&D-type roleplaying system, the Wounds system does not scale as you become more proficient in combat. The Burning Candle ruleset largely deters the need for roll-pool scalability, rather enabling more training, skills and combat options. You cannot train your body to deflect bullets and grow flame-retardant skin cells, you can only get better armor and cybernetics that will shield you.

The max number of Lesser, Greater and Mortal Ailments your character will be able to take is determined during character creation, and is dependent on the type of character you create. Your background traits and Virtue allocation will determine how many hits you can sustain. During the game, there are drugs that will temporarily increase your max ailment number, but what you start with will more or less be what you end with.

If you have a weapon that is able to shoot with precision (or have trained to add this action button to that weapon), you can choose to take a longer period of time to aim so that you can target body parts of your enemies, which you can use to your advantage as destroying a specific body part will have very tangible ramifications. With enough leg wounds, your enemy will move very slowly or not at all. Too many arm wounds and aiming will become impossible. Head wounds will allow you to mind-hack with ease, or sneak past them to end combat without worrying about them hearing you as you’ve blown out their eardrums.

Non-precise shots will target a random part of the body, which of course is still effective and will get them closer to their end, but might take longer to show serious ailment or death. 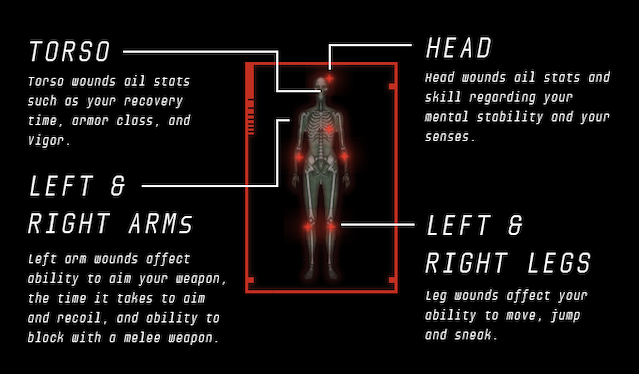 Some ailments you deal and receive will not reduce your stats, but will instead leave your body less equipped to deal with damage, converting the next wound you receive into a higher level wound.

So you can take a serious beating, but how do you go about healing all that? You’ll have access to various health kits that can heal most Lesser and Greater Ailments. Health Kits aren't bags of holding, and are only fitted to deal with certain kinds of wounds. You might need to carry around a few to cover your bases, though these are expensive and hard to come by. There are a handful of categories (we're keeping these limited), and cover areas like burns, ballistics, laser damage, etc.

Only a surgeon can handle most Mortal Ailments, the ones you could heal can be brought down to a Greater. These generally involve intensive medical procedures, so if you’re under the strain of one of these you have to wait to be back at your base or to visit a neighboring physician. This can be done during a rest period, which will last a minimum of 8 hours. During this time, your non-critically wounded party members can train, labor for cash, or gossip in pubs.

That means if you know a target is only at a destination for < 8 hours, those lacerations in your head will have to wait if you want to complete that mission a little easier.

The good news is that wearing armor or cybernetic torso plating will reduce a damage roll against you and hopefully move it out of the critical zone and into a much more manageable amount of pain. Armor and Armor-based Cybernetics can go on any part of the body, and act as a negative modifier to the damage output for that body part specifically (seen in graph earlier). So if a character is wearing body armor and takes a bullet to the chest they may just get winded rather than puncture an organ or break a rib. These armors typically have a downside to other stats or output, but sometimes staying alive is optimal.

Good cover tactics will keep NPCs from taking too many precise shots at you and seriously handicapping a vital body part, forcing them to instead to stay on the move and use shot types like suppressing fire or grenades to draw you out.

I love a detailed damage system in games. Thanks for making damage mean something more than a nebulous # :)