I'm making some plans for the overall world design at the moment. I consider the current world map and population a placeholder really, so I'm gonna give you my ideas for the final thing.

I'm making some plans for the overall world design at the moment. I consider the current world map and population a placeholder really, so I'm gonna give you my ideas for the final thing. Its not what I'm working on for the next update, I'm just sharing my plans:


Speaking of the new character models, here are the finished hi-poly male and female base-models: 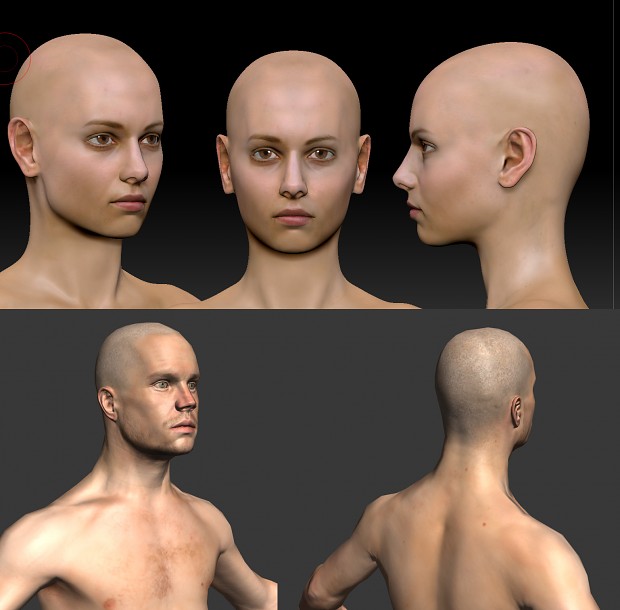 There will be an updated character editor too, with controls for the face shape, new face skins, hair and beards.

Wow, awesome. Sounds pretty good to me but probably takes a loooooonnnngggg time I would assume. Keep up the great work!

SO I have to remake my guys because i have a team of generic looking white males all with korean names lmao! nice new features though. Can't wait! this is why I paid to help out an awesome developer.

SO I have to remake my guys because i have a team of generic looking white males all with korean names lmao! nice new features though. Can't wait! this is why I paid to help out an awesome developer. - Not sure why it said I was a guest.... fail MODDB FAIL.

One question tough: i really like the emptyness in "some way" it is now, because it really, really gives the feel of a MASSIVE world.

Will that be missed?

I will miss that!

The emptiness is what first brought me to this game. You are right too; it does make the world feel a WHOLE lot bigger than it is.

PS: I also make all the view distances in Skyrim their lowest so things seem emptier than they are to make the illusion of distance.

It will still feel just as big, but will be more eventful on your travels.

If the travels are smaller, then it won't feel as big.

Perhaps instead of shrinking it, add more stuff between the main "roads" would make it better, like ruins, bandit camps waiting to ambush travelers and merchants, etc.

But then again, perhaps it's who dislikes seing big stuff being "cutted" in some way :/

Like bandit camps on main road to other city. So traders must take the long road(way) to other city. Or if you hire mercenaries they will clear it and you would help traders and you get rep.

I agree, and home-made tanks xD

Dude, I am waiting for a good map editors. I have some ideas for a mp, and map region. Being able to add parts to the map would be a great modding feature, that would need to be used with precaution.

I have noticed that it doesn't take long for Kenshi to start devouring resources, so the smaller map-area loading will help this out significantly I would imagine, even though it never really bogs down for me, but this is minus shading currently too.
Will we be able to deconstruct player-built structures and reuse some of the materials for "X" appropriate structures? This could make any long term exploration viable if the opportunity is still somewhat there, i.e., build an outpost progessively further from town. The player wouldn't need to worry (as much) about raids, tending to the wounded, and whether or not he or she left the stove on...that kind of thing. Then again, if you build too close to Lu Bu and the Han Dynasty, and the player is a noob peon, said player could be backed into a very nasty corner.

My dreams for this game are coming true! :P

This is great news! Such a tease!

I got the game the other day and am having a lot with it already.

Question, what do you mean by Races.
Different races of men, or other creatures.

umm i dont mean to be disrespectful at all. i love the game. i play it so much that i begin playing at night and then i hear birds chirping. my factions name is flcl(fooly cooly) but i was wondering if there will ever be a class with a giant hammer. just wondering. thanks for making this awsome game!

Don't like seeing things get cut or sized down. Filling out the empty space might be a better way to do it? Keep up the good work, this game is getting better and better.

Nothings getting cut, just reshaped to fill more empty space. The map will be just as big.

If you decide to make the world more dense, consider doing that in a lopsided way so that some towns/locations are still quite spread out. Especially for the tough locations. It's nice to have something to do and see over every hill but it kills the barren wasteland vibe. Fallout 3 suffered from that for example.

Traveling now costs a lot of time but, maybe you could add horses
to speed up the traveling. Or how about airbaloons?