In this update, I showcase some new screenshots, GIFs. I also share some info about the Inventory, Abilities, and Crafting, as well as what's next for Within the Cosmos!

Hello again everyone! It's been quite some time since I last posted an announcement here. I feel like it's about time I update all of you on what has been going on in regards to the development of the game, and what the future holds.

First and foremost, I want to thank you for your patience, and for hanging in there with me while I develop this game. I want to sincerely thank you all.

The last few months have proven to be a little hectic. This global pandemic has been troublesome for all of us. It had an impact on my personal life, and social distancing restricted my ability to get the voice actors to record the lines I needed by the time I wanted them. The positive of all of this is that I have been able to use this extra time to further optimise and playtest the game, as well as create more content.

I've been posting images across the games social networks (@withinthecosmos), I also have changed the screenshots on the Steam store page. Here they are, if you haven't seen them. 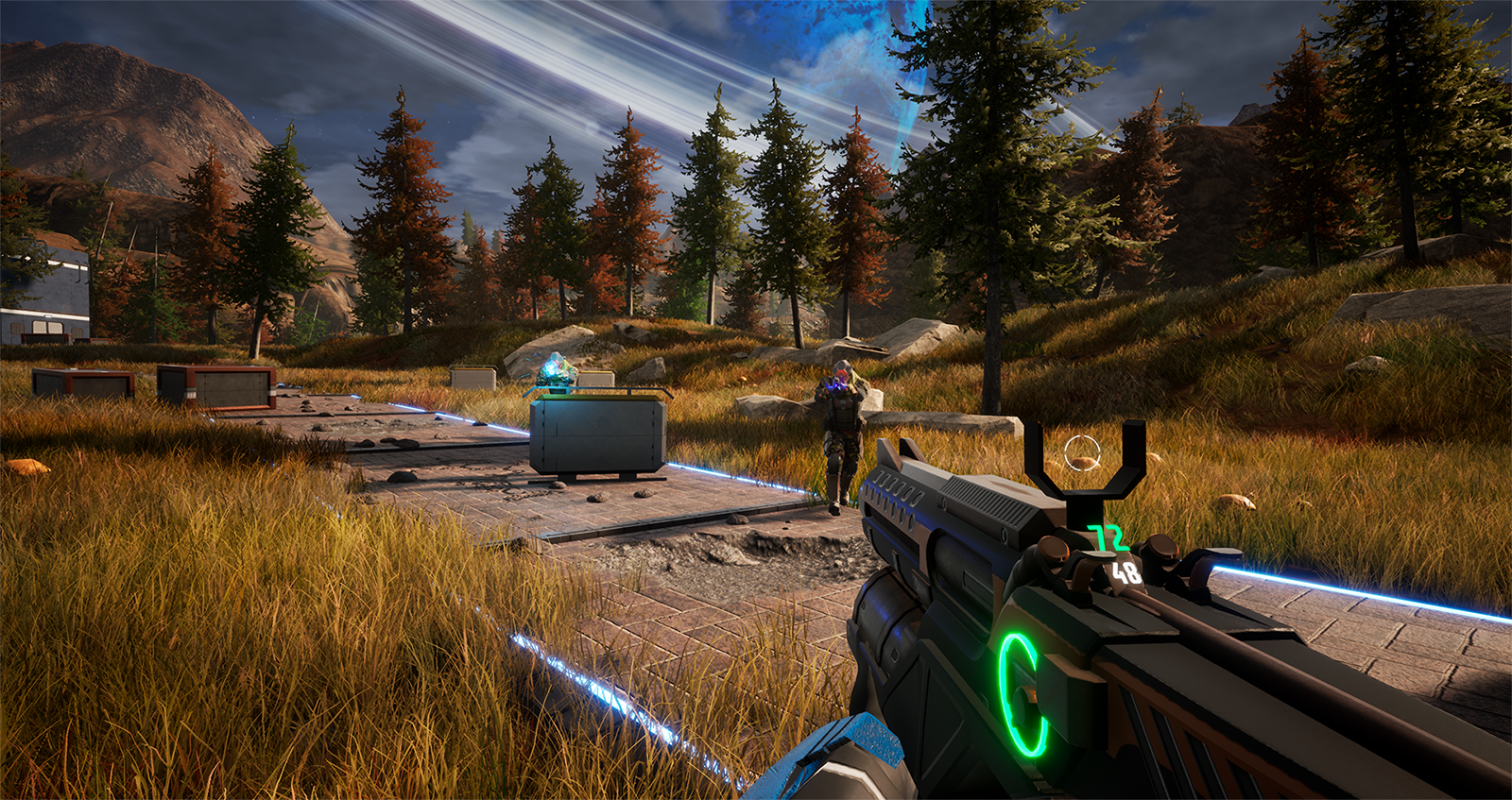 A cave in Berith II: 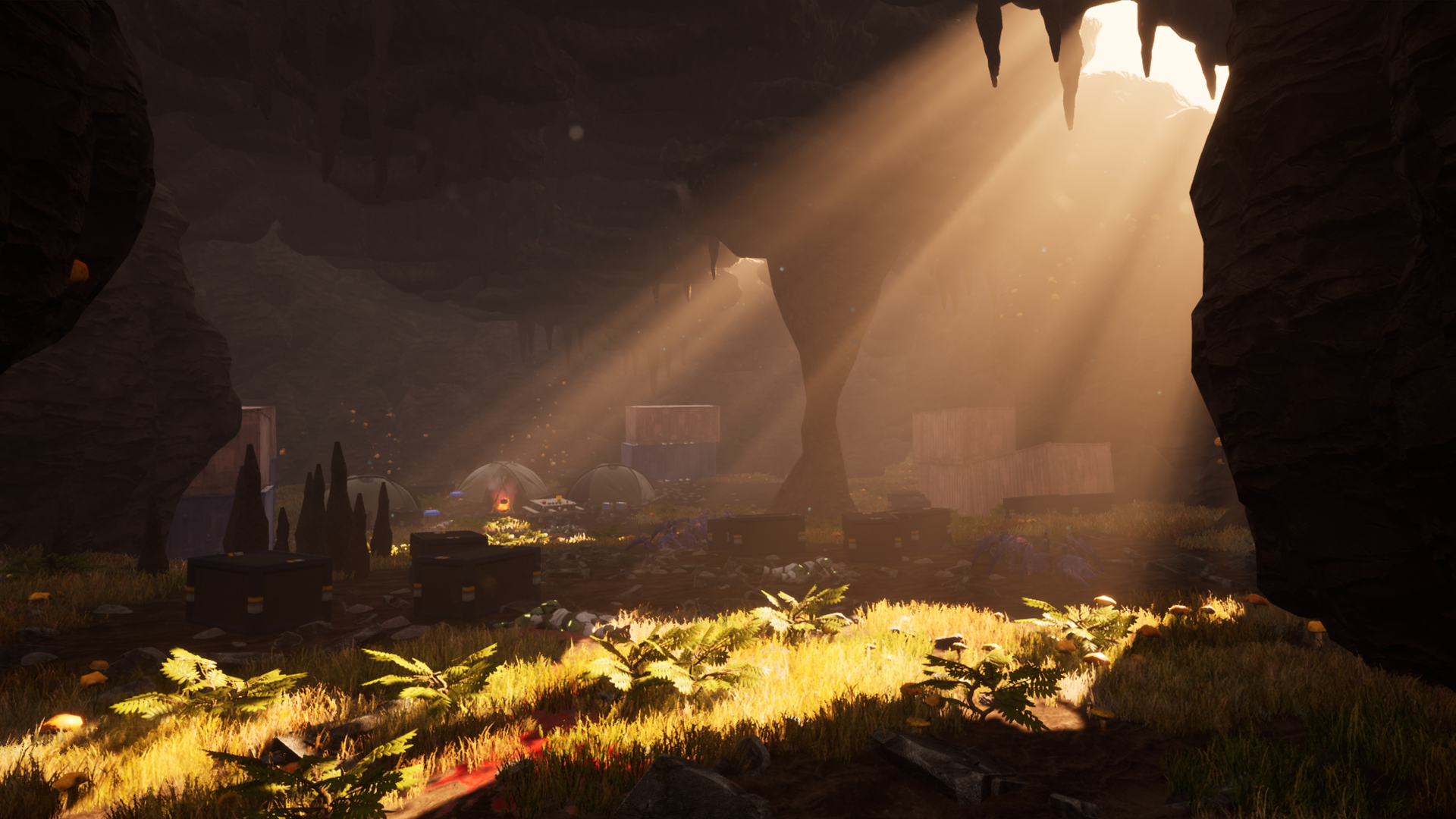 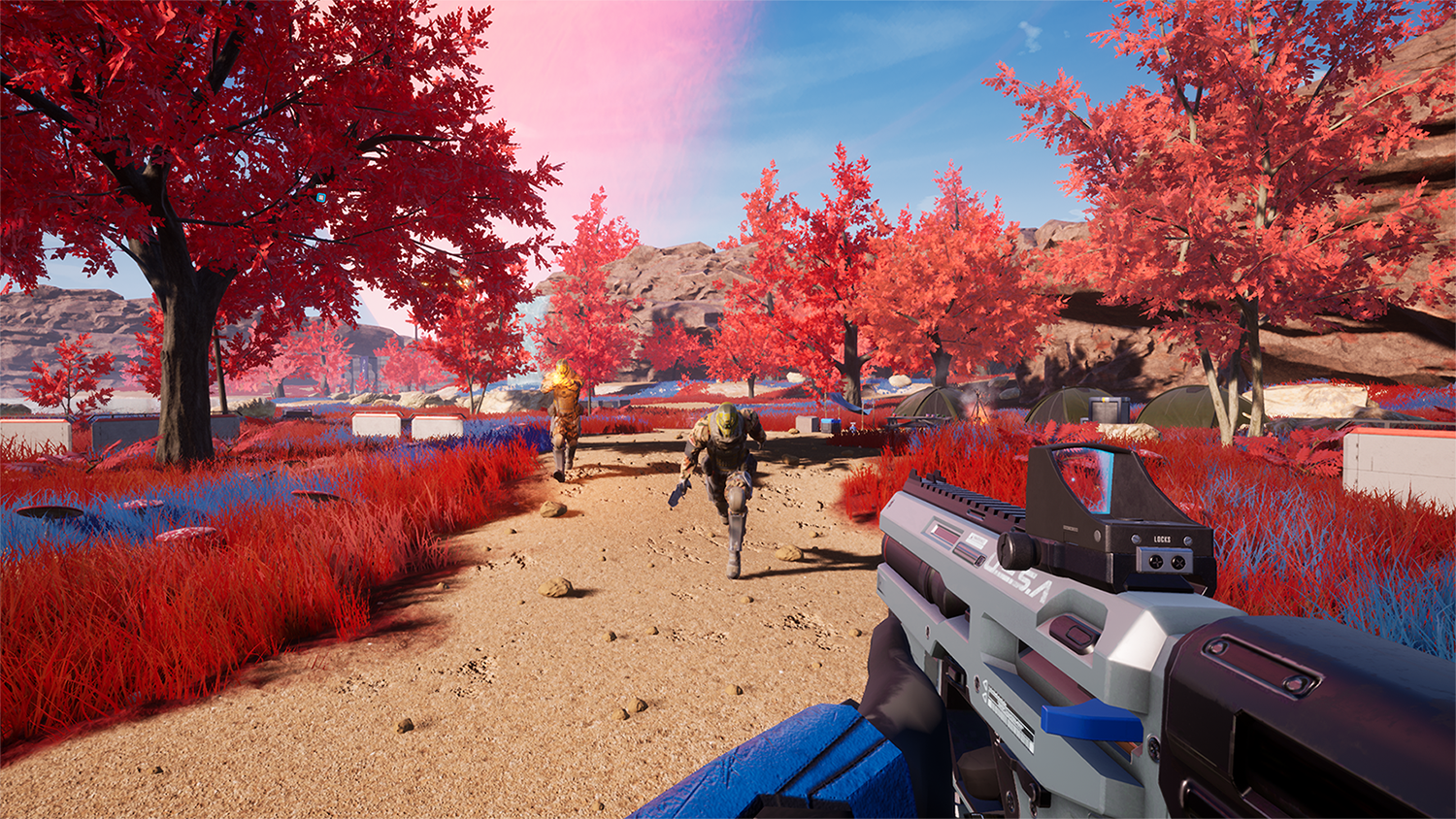 Dialogue options with one of the NPCs: 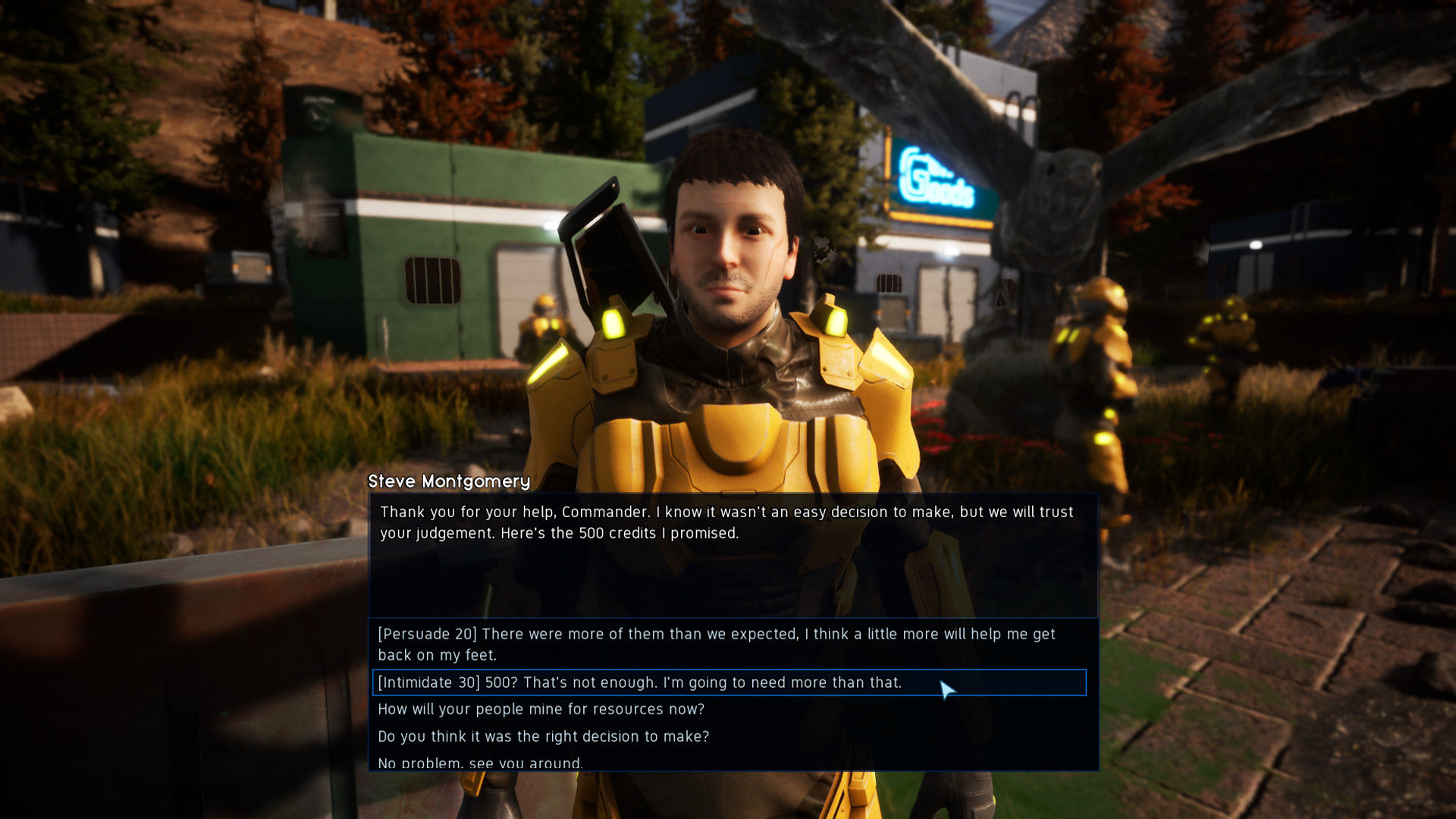 One of the biggest changes since the last post, and trailer, is the inventory system. I added the ability to sort the inventory, and items are now categorised. There are Weapons, Armour, Consumables, and Miscellaneous categories. There's 2 Headgear slots (which can be used to have on something like a hat, and glasses), one armour slot, and one explosives slot. Here's what the inventory looks like now: 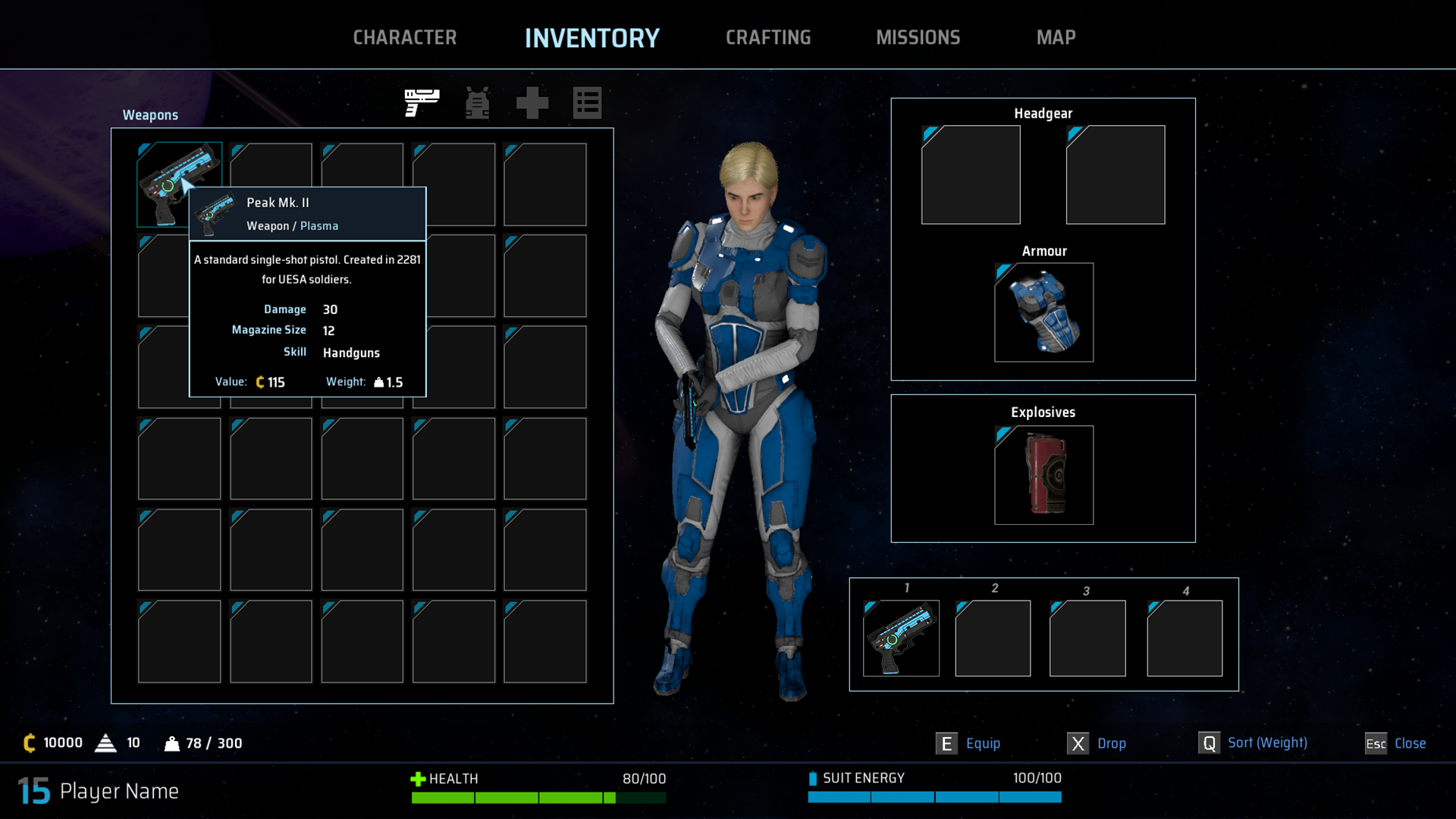 There are two parts to crafting. In the Blueprints section, you can create simple, single use items. The amount of parts needed, how many items get crafted, and how effective the items are that you craft is governed by your Skills, Perks, and Stats. 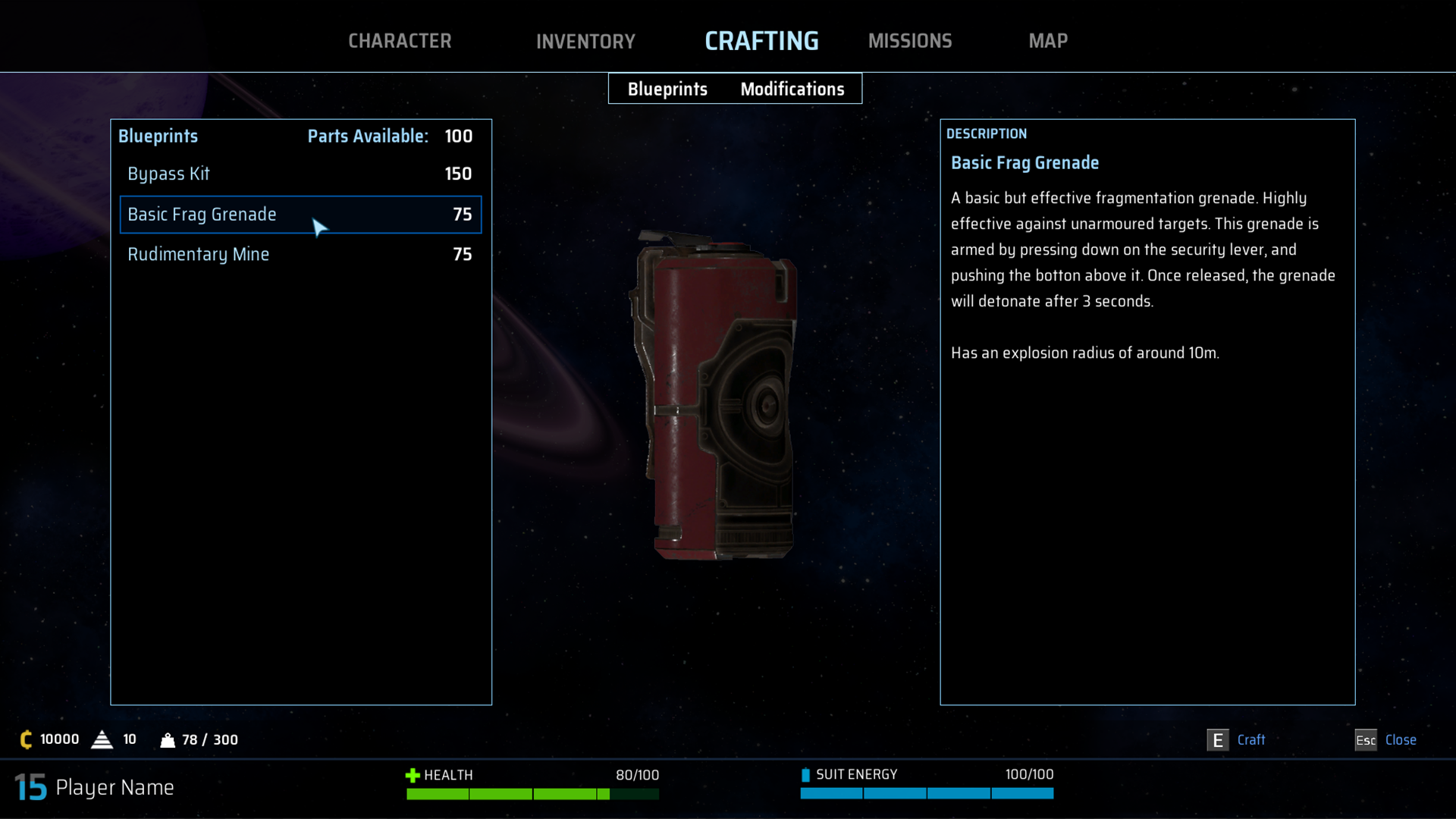 Someone with a higher Explosive skill would be able to craft a better Frag Grenade. One that deals greater damage, and has a larger radius.

The other part to crafting is weapon modifications. In this section, you can customise weapons you have in your inventory. When you select a weapon, you will see what attachments can be added/changed. You will also see in depth statistics for each weapon, so you can see just how much damage a weapon does, or its range, among other things. Here's a preview of what the modification system looks like while modifying one of the pistols in the game. 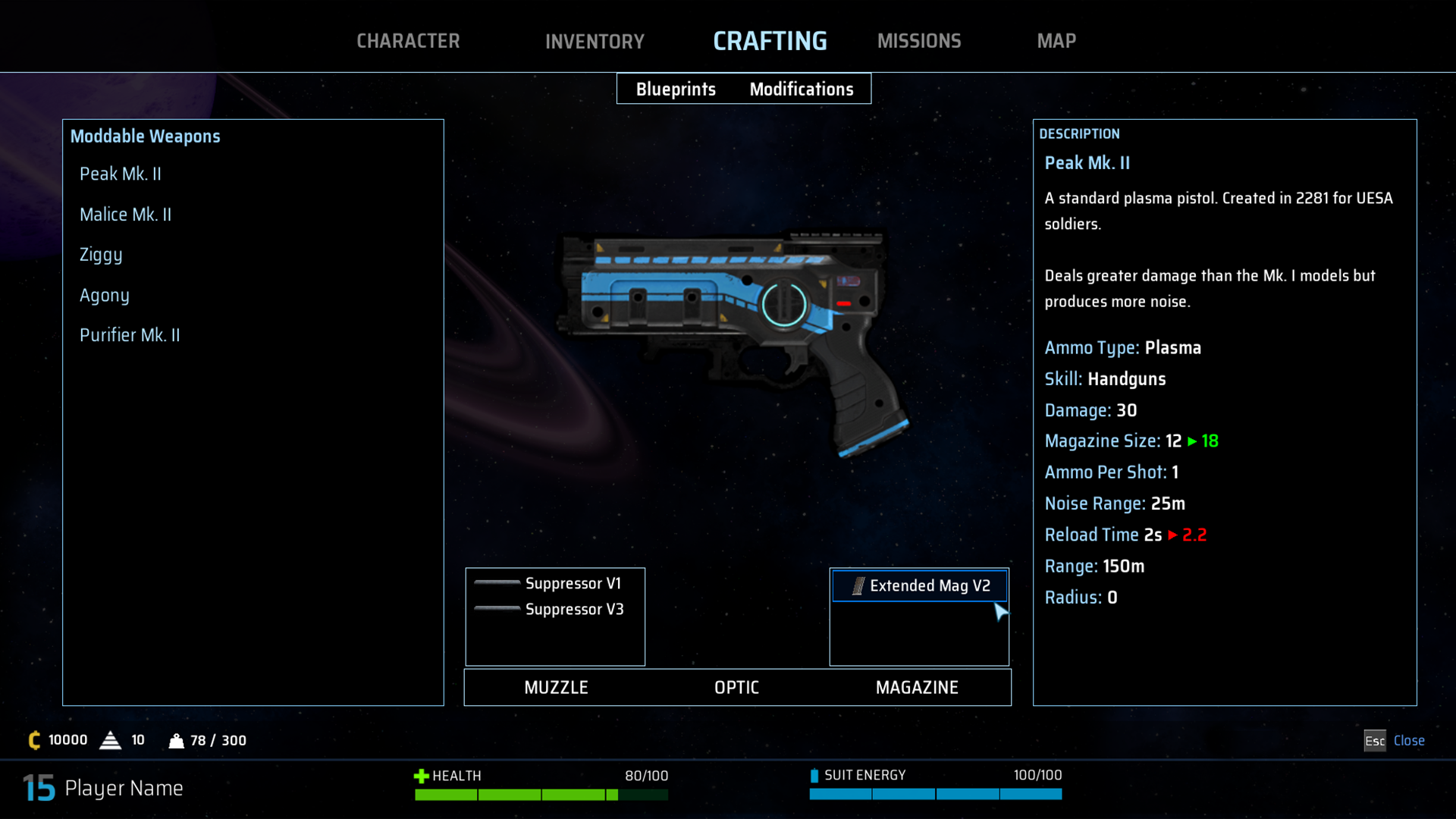 Another thing I want to show you all are the abilities in the game. I spent a lot of time trying to get the balance right and letting players have fun using the abilities, without making them feel too overpowered. There are 7 abilities in the game which consists of the Assault Turret, Barricade, Combat Drone, Incinerate, Jetpack, Tactical Cloak, & Time Dilation. When used, they will drain some of your Suit Energy. Your Suits Energy will refill over time.

Here is a look at 3 of the abilities in action:

Time Dilation:
Slow down time around you and plan your next move

Incinerate:
Select a target and fire a projectile that explodes on impact and has a chance of setting the target on fire

As most of my time is dedicated to developing the game, I haven't found much time lately to record a trailer. I realise it's been about one year since I last shared the gameplay video. Rest assured, creating a new trailer is the next thing on my marketing to-do list. The game has changed and improved since then, so I am itching to show you some new footage. In the absence of a trailer, I decided to create some GIFs for all of you to see for now!

The town of Chronos, situated on the planet Berith II:

Dialogue options with one of the NPCs:

With new content being added during the last few months, and now that I'm finally beginning to receive the voice actors recorded dialogue, I will need a bit more time to implement, playtest, and optimise the game prior to release. I am now aiming for a September 2020 release. I hope you can stick with me for a little while longer as I continue to work, and make this the best game it can possibly be.

Once again, I want to thank you all from the bottom of my heart. Your support and patience has been helpful, relieving, and empowering throughout this journey.

Please wishlist it on Steam if you like what you see!

Thank you so much! I'm glad you like how it's looking! :)

If not, I'd love to poke around and help out if need be.