Post news RSS Whiskey, Loot, and Other Such Things

Learn more about some of the items in the game and preview our inventory screen.

The new year is upon us, and now that all of us are back from our respective vacations, we are doubling down on work with EDGAR. Our goal is to get the game into the next stage (whatever that may turn out to be) by February. So we’ve got a lot of work ahead of us!

We had a slight delay in progress as the Unity plugin we were using became suddenly unstable. This happened a few weeks apart on two separate machines, and we knew that by continuing to use it, we would risk wiping our spritesheets every time we made a change. The plugin was very helpful, and insightful, but was just no longer support by the creator, and so we’ve adopted 2DToolkit. The good news is the scripts were able to carry over for the most part, and all of the art has already been re-added to the game using this plugin.There are two things I’d like to talk about in this post that I think may be of interest: pickups and inventory.

Go on then, pick them up.

At the moment we have three pickups that will be strewn across the world (shown above). Coins will be gathered for purchasing weapons from NAME REDACTED and can even be used for upgrading some items. They will come in a variety of values including half-pennies, farthings, sovereigns and more. We are playing around with the idea of making a handful of coins spill out occasionally if you take damage (ala Sonic) because there’s nothing like scrambling around like a London vagrant, frantically gathering enough coins to buy another swig of whiskey. Which brings me to the next pickup.

There is a surprising amount of debate surrounding Edgar Allan Poe and alcohol. Many believe that, due to the nature of his death, Poe was an alcoholic, while others believe that he was actually allergic to the stuff altogether. We thought long and hard about whether to include alcohol in the game, eventually deciding to go for it, and here’s why: Whether Poe drank or not is ultimately irrelevant when it comes to telling a Gothic, Poe-esque tale. Many of Poe’s characters drink, and intoxication fits superbly with the surreal content that fills his stories as well as our game. So scattered across the game world will be bottles of whiskey that will replenish varying amounts of Poe’s health on contact.

The last pickup are inkwells. As a writer, ink is to Poe as bullets are to a soldier. They are a form of ammo that is spent on every single attack. Our aim is for this to add a frantic, fast paced feel to the game as players run around, killing baddies and collecting ink. Inkwells will be found throughout the levels to refill some of the bar, but ink will also spill out like blood from defeated Foes. In order to prevent situations where players are fresh out of ink and face a plethora of Foes, Poe will always be able to put away his weapons and get down and dirty with an old fashioned scrapping. While unarmed attacks will be weaker, they do not require ink, and will allow players a means of getting back into the inky flow of things. 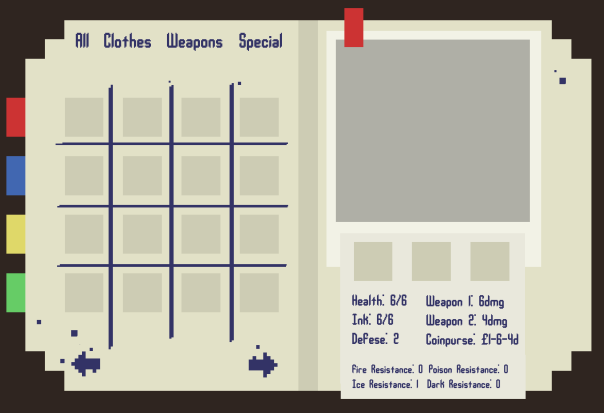 Dear diary, today I killed rats and found a gas mask.
The last thing I want to show is our work in progress for the inventory screen. Here you can see our thoughts on how loot will stored and equipped. The loot icons will be stored in the grid on the left page, and there will be an option to filter them by hats, outfits, accessories, special, or all. A mouse over on each of the items will pop up with the items info. Items can be dragged to the equipment spots on the right side and will change the stats below accordingly. The top of the right page will be a Victorian style black and white photograph which will show Poe wearing the currently equipped items.

That’s all for now, but we’d love to hear your thoughts on everything so far. What do you think of the pickups? Does the inventory seem intuitive so far. As always, you can talk with us here or on our twitter @EdgarAllanPwnd.