We spend 99% of our time working to make Natural Selection 2 awesome, so we do not often think about 'corporate' stuff. We do however have an Unknown Worlds motto: 'Unite the world through play.' Throughout the development of NS2, there has always been the sense that the game was a global phenomenon.

Where in the World

Our office is a prime example. The majority may be US citizens, but we also have an Austrian, a Pole, and an Australian here in San Francisco. Offsite, Indonesia, France, the UK, and many more countries are all represented by full-time off-site developers. Our volunteer playtest group is a rainbow of nationalities, with a plurality of accents calling out 'kill that Onos!'

Here is a graphic that proves that the phenomenon is very real in the broader playerbase. It is breakdown of three months of Steam sales data, showing per capita, total, and proportion of total by region: 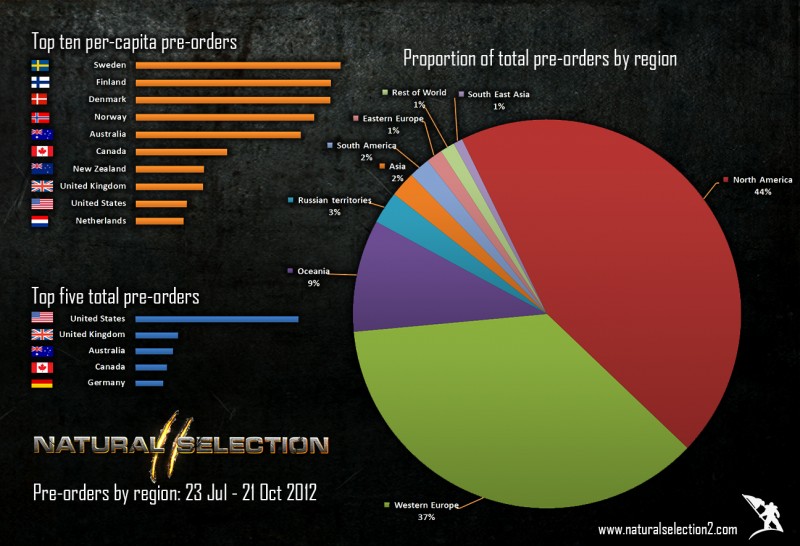 Well, we're one week from releasing the game to the world and we're making some BIG technical changes. The networking and performance changes in this build are staggering. Ideally we wouldn't be making these changes this close to launch, but we felt that the improvements were worth the risk. Note: there is a "hitch" when you come to a stop. We know about this and will fix it shortly, but wanted to get all the other improvements out to you in the meantime.... Onward!

Haha, Sweden is at the top :D

That's becuase Sweden loves to support indie developers and play awesome games. We invented pirating and we got Mojang. I didn't see Russia at the pie chart?

By big, do you mean 300% performance increase? I hope so. It's staggering when GTX670 has trouble running this game, regardless of settings. That could kill the playerbase alone, despite being a good game.

Also, what this chart shows me:

Like so many Indie games, it's going to end up populated by the EU and 3 years from now, NA servers with good ping will be hard to find.

Oh will you just try it out and give it a rest!? Every, and I mean every, NS2 post here you go on some tirade over performance as if it were something new every time, despite it being their #1 focus for many months. Just give em a chance! At this point it's just trolling. I got to say, it's quite tiring, and you haven't even played it yet!

I have played it. Performance went up 10-15%. Pretty big, really, but not enough. You can read their official forums for more on it.

I have a old intel 2 core quad 2.4ghz, with 4 gigs of ram a AMD Radion 6800, and windows 7 64bit. Not a real powerhouse but enough to get by. I tell you the game runs perfectly acceptable even in the heat of battle with virtually everything on max and a resolution of 1920x1080 except ambient occlusion off. Your system has a bottle neck somewhere and I would seriously consider talking to a dev to find out where it is.

And only in this game?

BF3 as well, maxed out and that's WITH AA. Granted these are from big studios with big budgets, but you get the point.

My fps max's at 60 and drops to 25 for half a second during the most intense stuff but mostly stays 40 during the game. And I don't have nowhere near the power rig you do. I could start turning stuff off or lower the resolution a small tad and it would be more consistent, but over all I'm rather happy. I don't really notice it unless I am constantly looking at the stats. And as long as above a movie's frame rate i'd say it's rather good.