Everything you do inside the pyramids will affect what you can do outside them, and vice versa.

Almost everything in Immortal Redneck happens indoors, but you can only improve your character and unlock new abilites outdoors.

Bruno here again, this time to show you some big stuff: what's outside the pyramids of Immortal Redneck.

Most stuff in our game takes place inside rooms and in closes spaces, but that doesn't mean we don't have something to do outdoors. Actually, some really important stuff happens outside the pyramids, and I'm going to show you how it looks.

One of the first things you'll see in Immortal Redneck is the sarcophagus you were into. Yes, somehow, a southern fellow ended up mummified and inside a mystical sarcophagus that made him immortal. Everytime we die, we'll end up there again like nothing happened. Here you have some concept arts.

We tried several looks for the mystical coffin. None of these are finals, but the colored one almost made it.

We liked it a lot, so we used it as a reference. Here, the plataform where the sarcophagus rests and the ornaments around it. 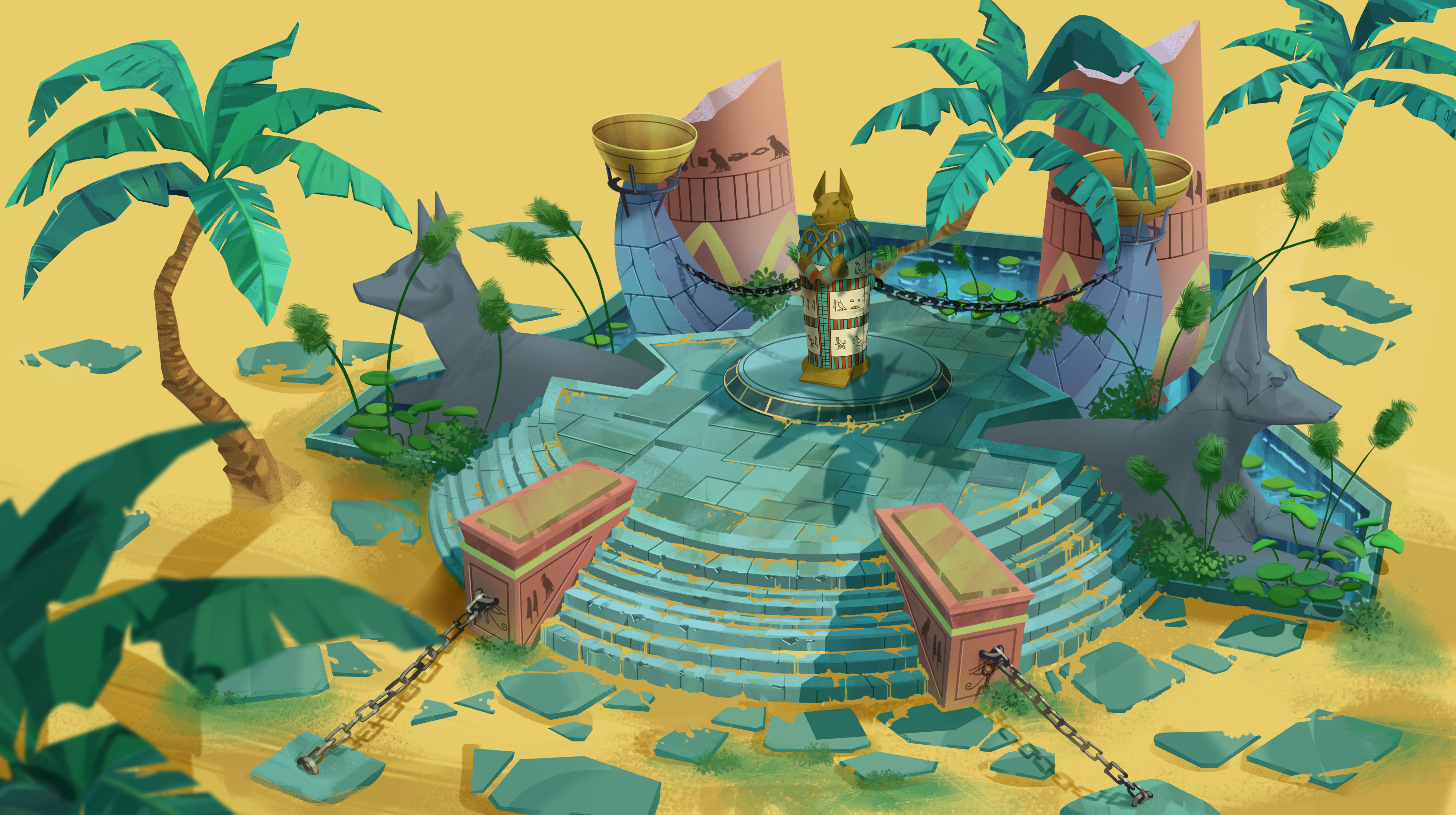 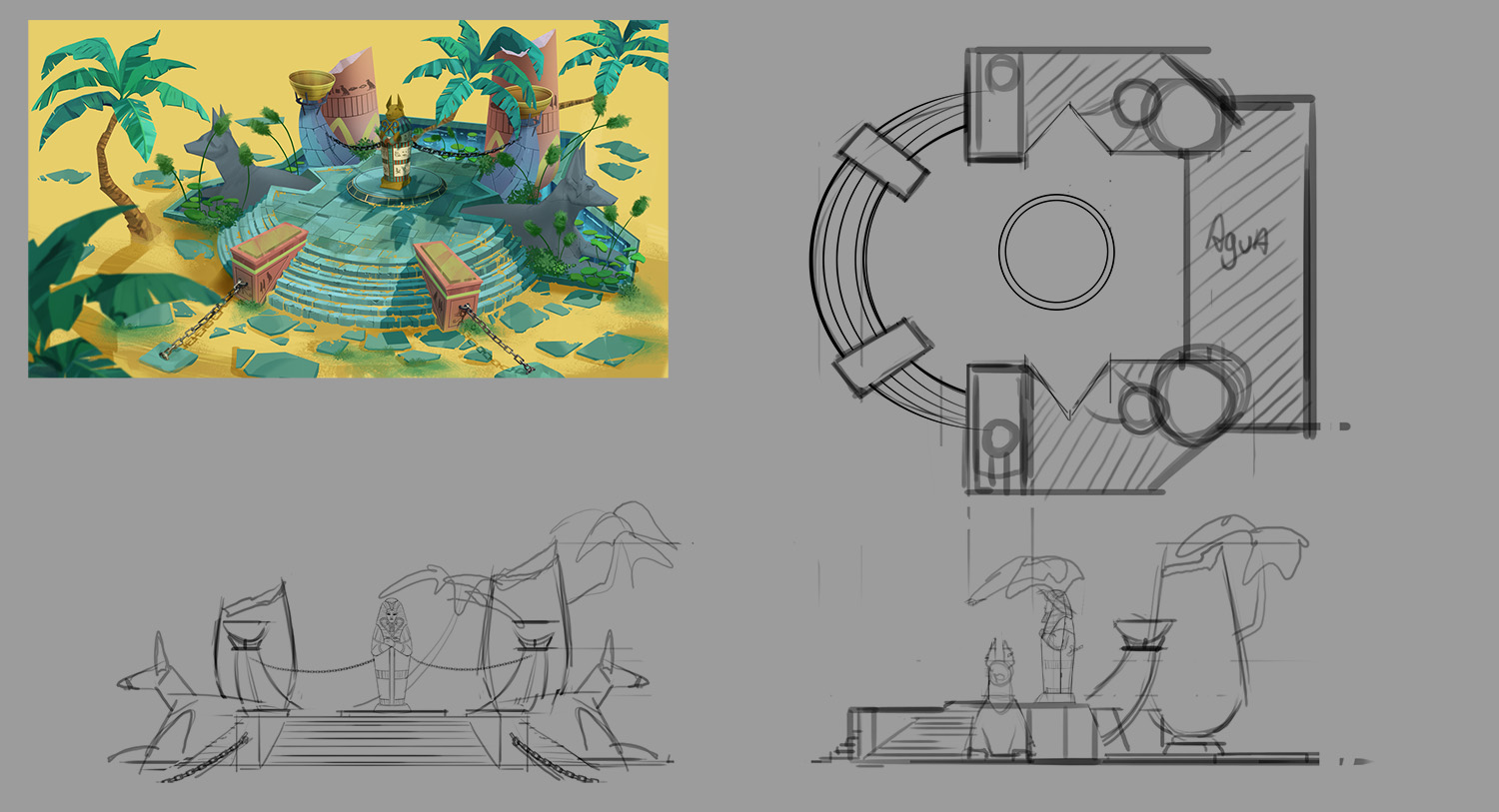 Oh, and talking about the plataform: we tried different floor designs before choosing a final one.

The final look of the sarcophagus and the area around it is a mix of everything we tried. This is the almost final design of the coffin the redneck will reappear each time you die. We changed the face to a human male since there was a human being inside. 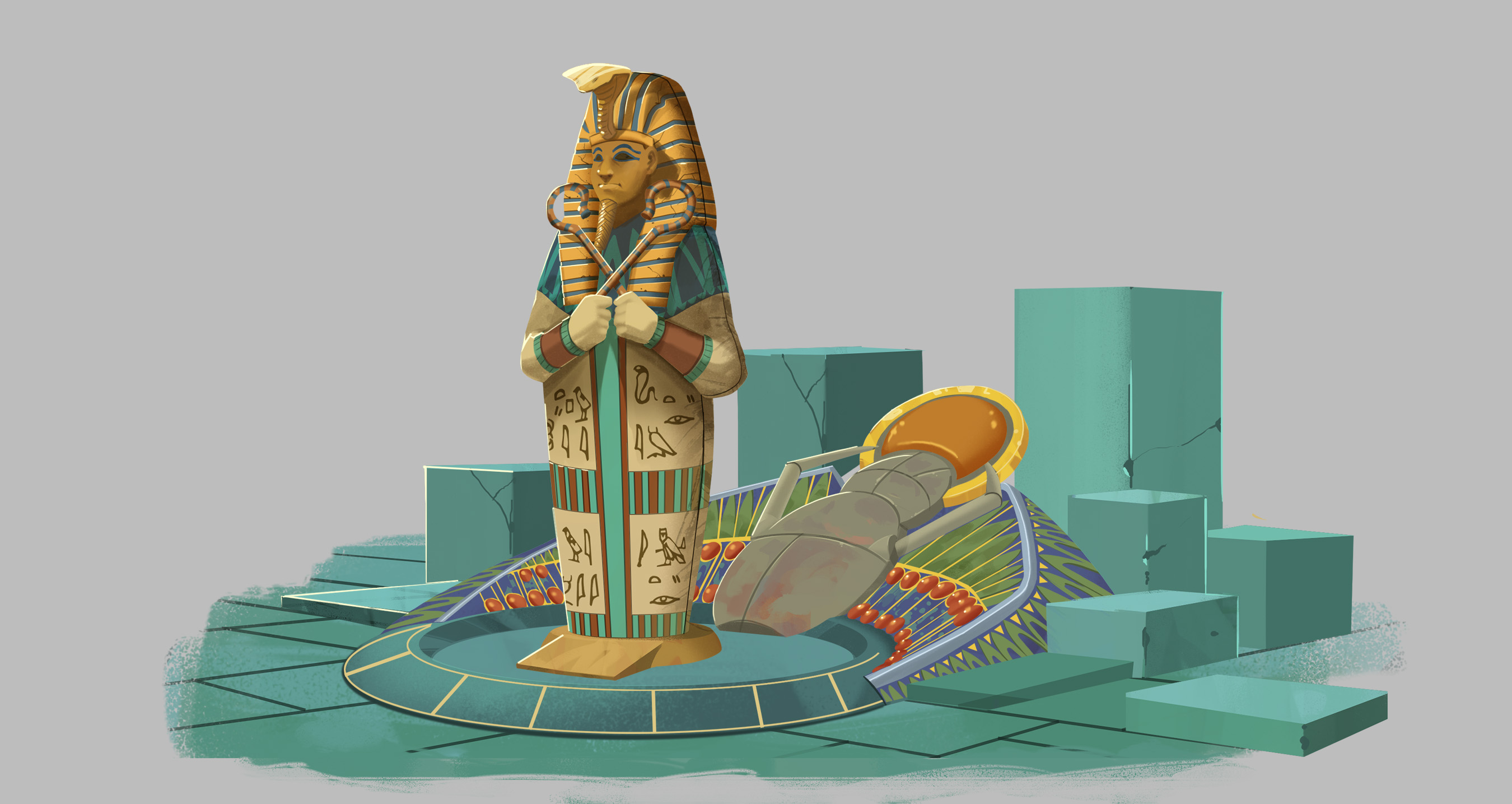 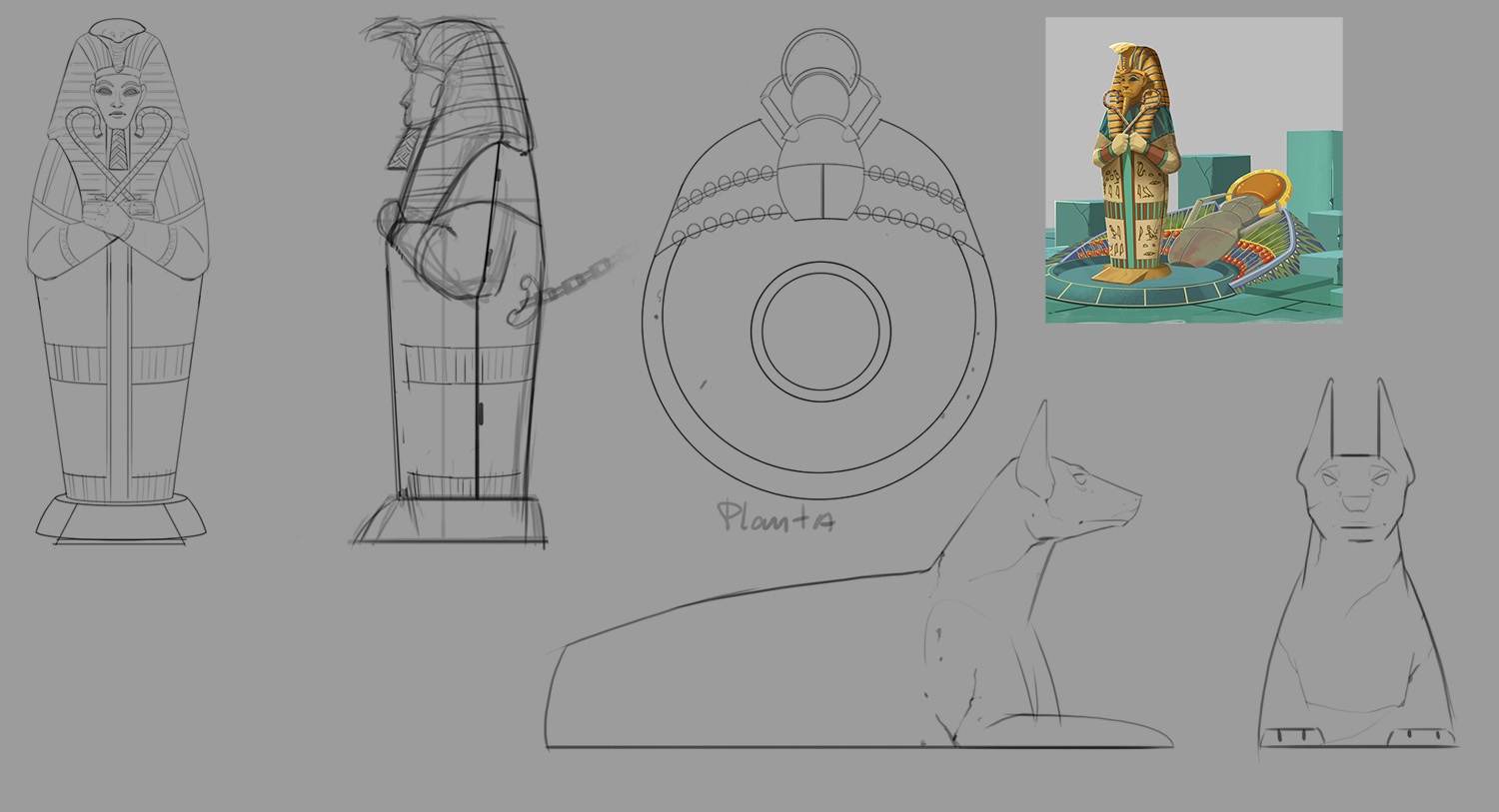 The sarcophagus may look as a mere decorative structure, but is the first place you'll walk around in our game, so we wanted it to be beatiful and to be a great first look. Hope you like it.

Now, let's talk about one of the two useful tools you have outside the pyramids. The first one is the skill tree. The Immortal Redneck skill tree is a real, literal, actual tree that develops and grows at the same time the redneck does. But to improve your character and to unlock new classes, you're going to need gold, that golden stuff you win when you open a loot chest or you kill some enemies.

Gold truly is a valuable resource in Immortal Redneck since it's the only way to buy stuff (more about it in a second) and to 'level up'. Maybe that's not the best expression, since you don't really have a level of anything, but the more gold you win and spend, the more capable your character will be. And once you unlock more branches and the tree grows, you'll have more classes to play with. So you start as a simple redneck with a tiny sprout, but you might end up with a big, strong acacia and a lot of options to improve your play.

Oh, yes, the tree is an acacia, also called thorntree, because it's one of the most sacred trees in the egyptian mythology. We heard the incredible powers of this tree has their origin in the Tree of Life, the one that held Osiris. Some even say that this is the Tree of Life itself. Others just think it's a tree planted in honour of Horus, whose sacred tree was an acacia, and that the God King blessed it.

The Merchant in Immortal Redneck is such a mysterious figure I don't have much to say about it. Yet. None of us know much about him, just that he sells you stuff in exchange of some of the gold you earn inside the pyramids. Such a mischievous fellow this one: he uses us to win money but he won't risk his own life.

I also heard that he sells permanent buffs to the redneck or even weapon upgrades, so he can run faster or have stronger weapons. I can't confirm any of these because our source is not very reliable, but I'll dig into it and tell you once I know more. 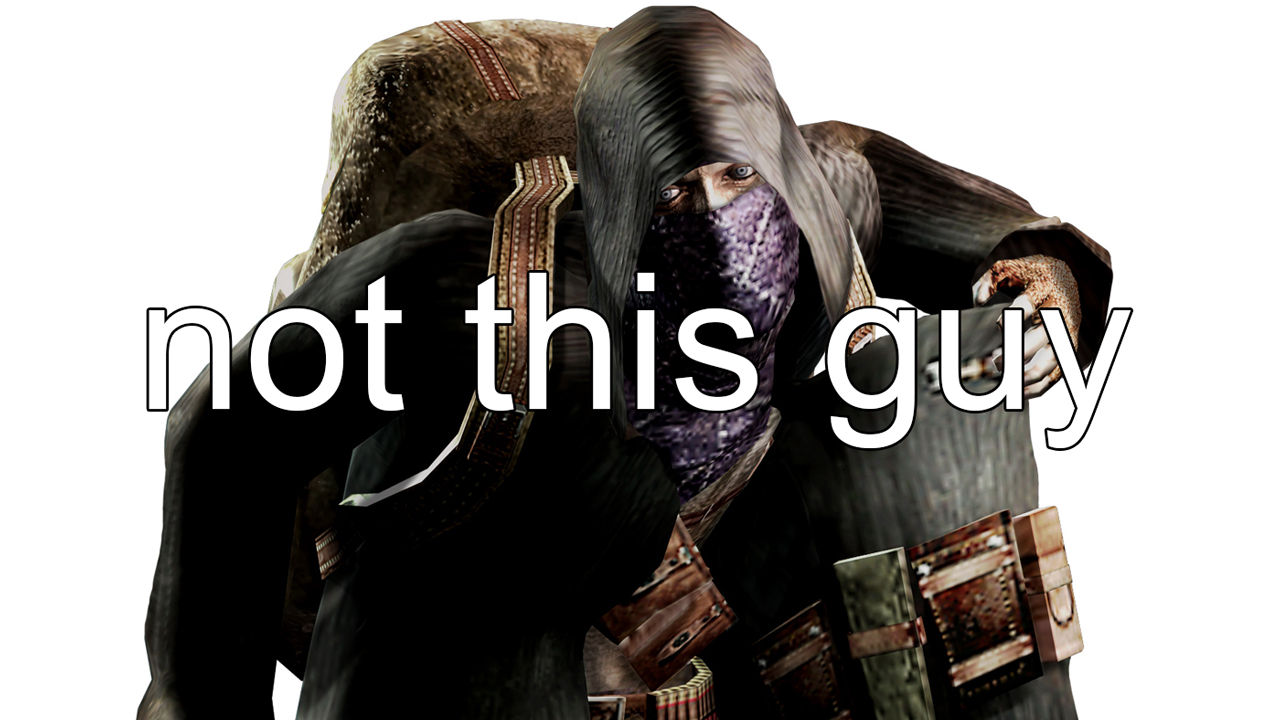 More artworks for you

We are still working on the 3D envorinment outside the pyramids, so we can't show you much about it. But it would be really rude to just tell you about them, so I have some concept arts so you can imagine the inmense scale of the pyramids and the sense of awe the poor redneck feels everytime he gets out the sarcophagus.

Of course, the final game won't look exactly like these concepts, but it will surely be a mix of all the ideas in them. Enjoy them and tell us about what you like or what you don't, we have some monkeys working 24/7 on our Facebook and Twitter profiles.

This is one of the first concept of the outdoors. At this moment, Immortal Redneck had a very different vibe. A lot has changed since this first artwork. 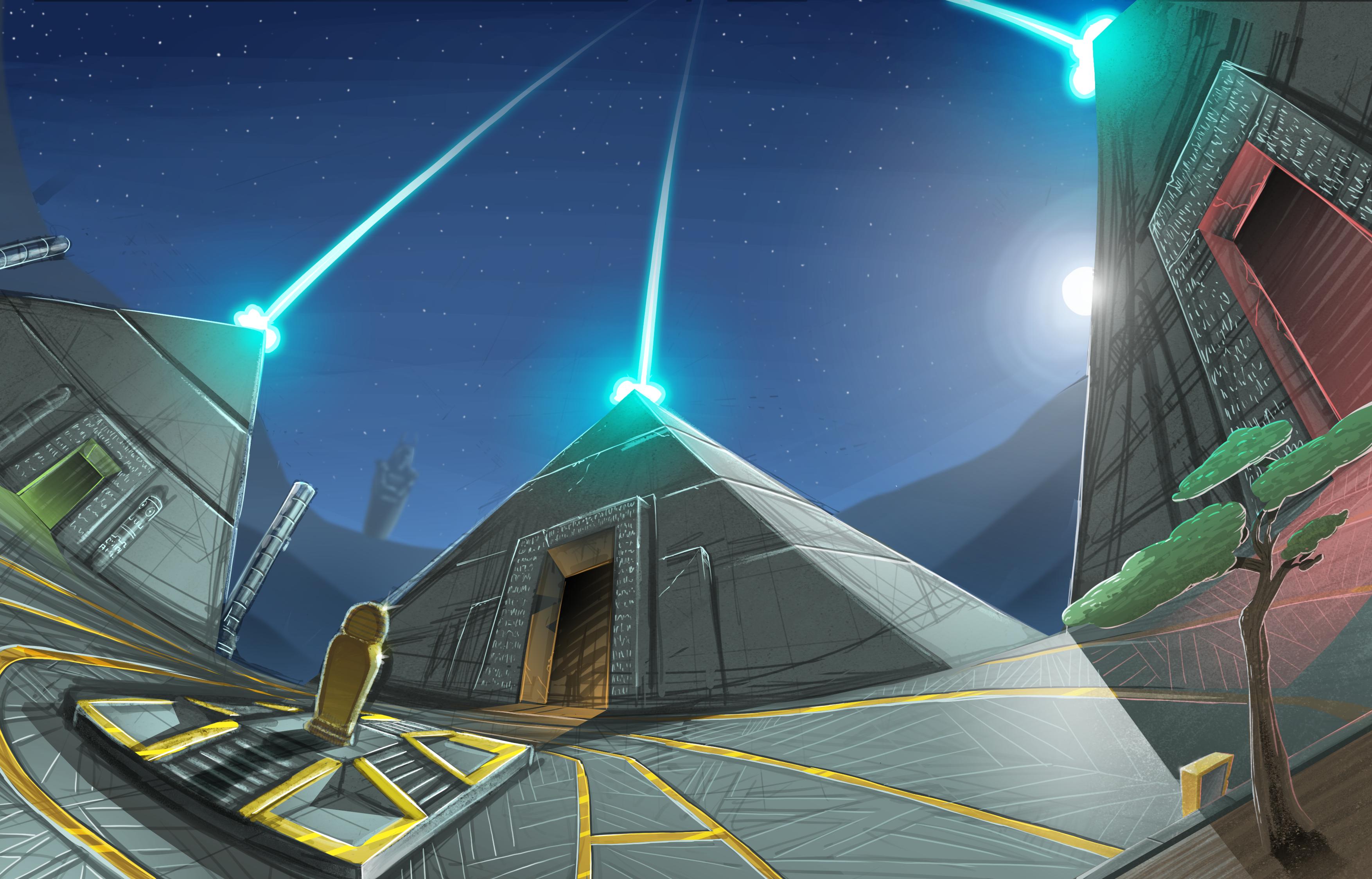 And this is the one you probably have seen a lot of time in our devlogs and social network accounts. We love how this concept condenses everything about our game: the mistery, the mythological side, the merchant, the tree, the redneck and the sarcophagus. We changed that last part, as you already know if you have read this post, but we still love this image. 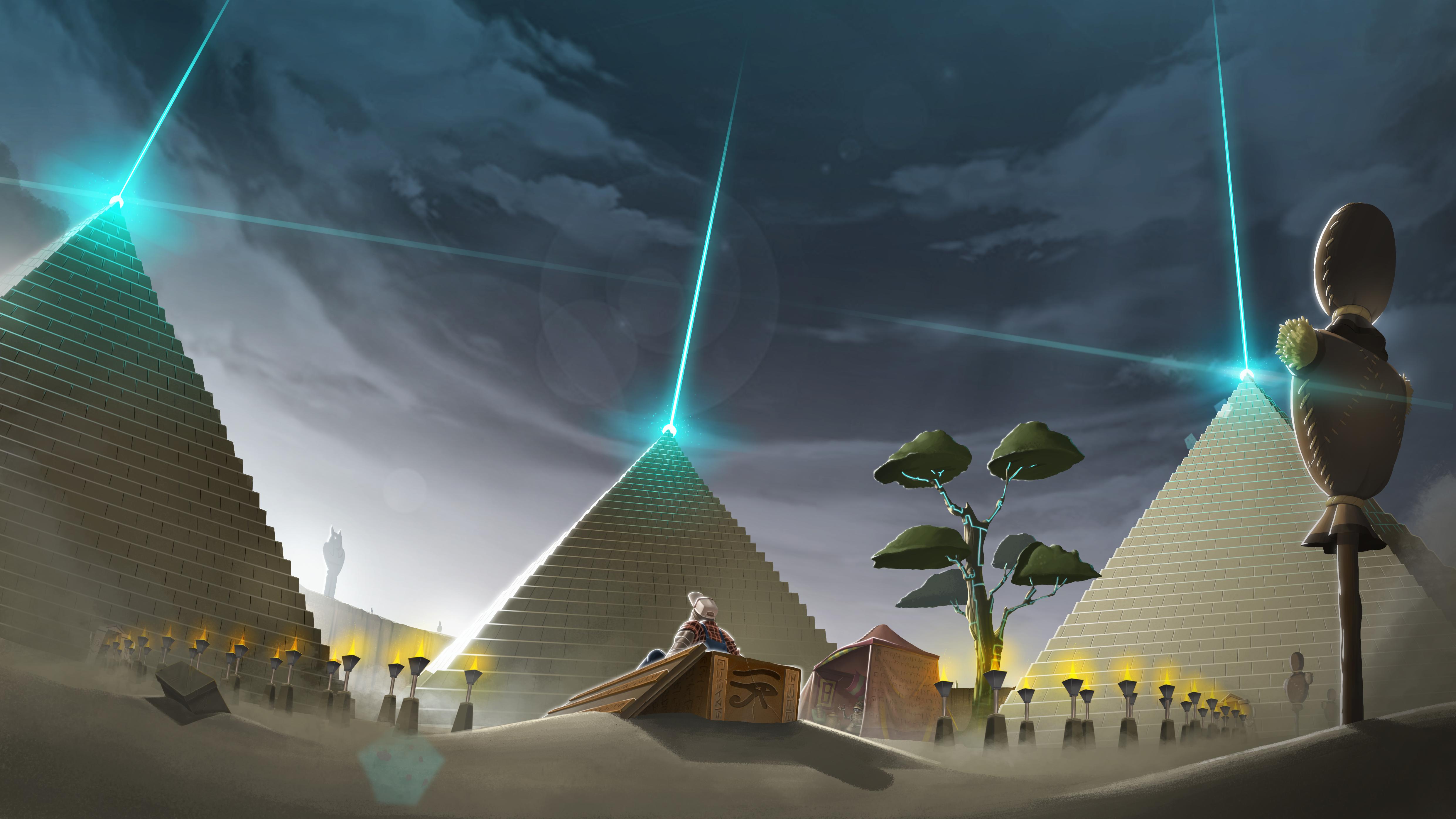 And this is the door of the first pyramid. It's a door, what else do you want me to say? Oh, it's also big, more than 10 meters high. Egyptians made some pretty big stuff to honour their gods, you know. 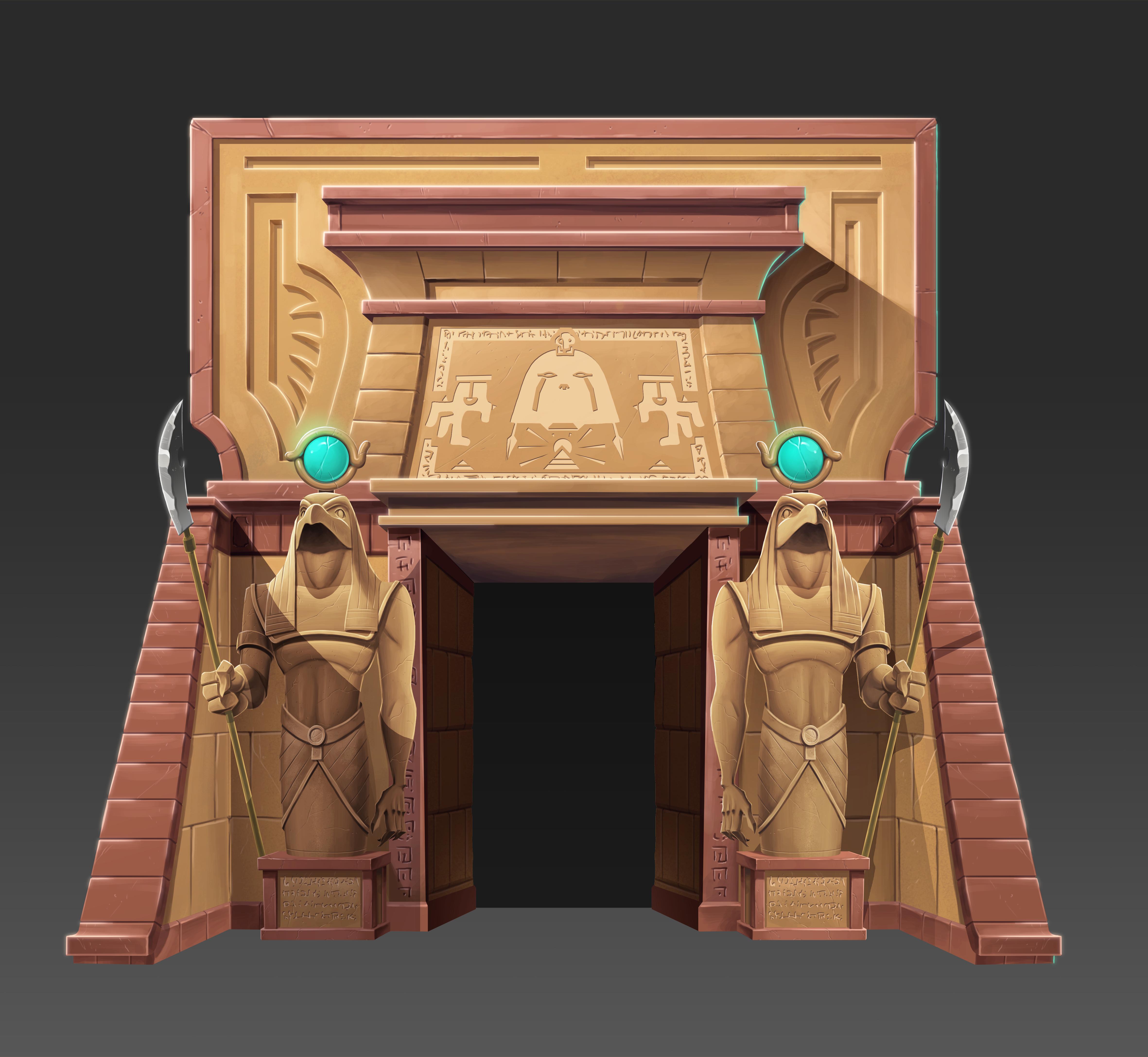 Thanks a lot for reading!