I discuss the upcoming features for the coming weeks!

Hey all! This isn't a regular news thread with flashy images, etc. Instead, it's just a small news flash in which I'm briefly going to discuss the new features that I'm going to add in within the coming weeks.

Why no "Weekly Recap"?

I've already done a mid-weekly recap on Monday, and I wanted to go ahead and work on a couple of new shaders in order to enhance the graphics a little bit further. Shamefully, I didn't really get anywhere with these, as this is a relatively new field for me.

So, instead, I'm going to drop the graphics updates (for now), and I'm going to continue working on actual game features. Shadows, etc. will be there one day. Just not yet.

The feature I'm going to work on this week (and probably next week aswell), is the AI. I've got some cool ideas here, but they need a lot of time and work in order to function properly.

As I've briefly mentioned before, Checkmate isn't like actual chess. The goal isn't to actually take the king of the other player (heck, it's actually impossible to do so!), but instead, you're must create a checkmate within the game. This allows for a little more interesting design, and prevents "largest army wins" scenarios.

However, the game does still remain in real-time. This obviously makes it really difficult for players to get a proper thought on how to put the enemy at Checkmate. Therefor, I'm going to introduce a partial turn-based system. Whenever you come near the enemy king, the game will automatically switch to turn-based, allowing you to put some thought behind your actions.

This new system comes with a lot of obstackles. Displaying which pawns following after which pawns, calculating whether the king is at check, calculating if there's a checkmate, making all of this look fancy with some new graphics, etc., etc.

That's why I'm going to take up to two weeks for just this bit of gameplay. I really want to finetune this and make sure it works flawlessly.

What does this mean for you?

Apart from that, nothing will change on your end!

I also want to take the opportunity and thank everyone who has commented on my game either here on IndieDB, on the Steam Concepts and on Twitter!

I even was at the 25th position for a while! :D 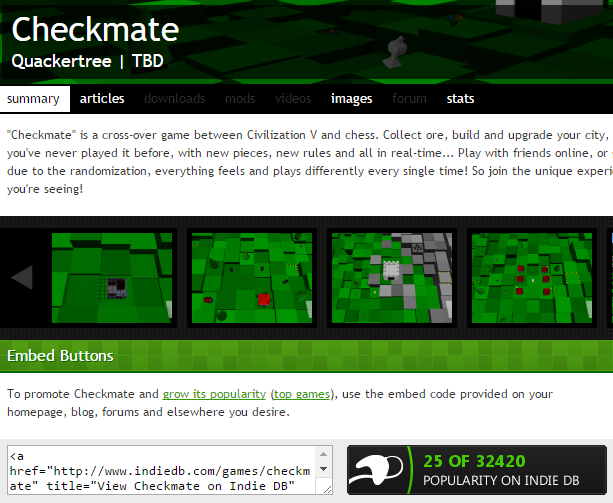 I'm hearing lots of positive things, and it really drives me to keep going! I'll certainly keep working on the game, as much as possible!

Hopefully this has informed you guys a little on the situation. If you've got any questions, feel free to let me know!

Have a great week, and see you guys next time!