It's been some time since I posted about Skein, so I thought I better update people on progress. New sound, new HUD, new graphics, Steam integration and a Linux port as well! Phew, it's been a busy few months...

It's been a while since I posted anything about Skein, but that doesn't mean I haven't been working hard to get it finished! I have...

Integrating Steam and Porting To Linux

So, the big news from me is that I have 99% completed the integration of the Steam API into Skein. It was a hell of a lot easier than I thought it would be and I've got all the current crop f achievements in and working, as well as the ability to take and upload screenshots. There are are also leaderboards, although that functionality is currently hidden from the user as I try to work out how best to add it into the game UI... 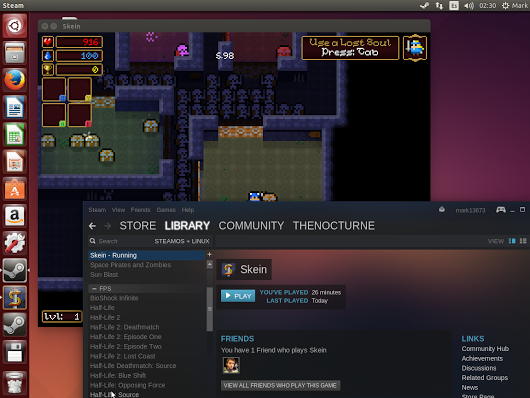 The other big news is that (as you can see from the screen above) not only have I got Steam support up and working, but I've also managed to port the game to linux! Although Linux users are a very small minority on Steam, I know they are a passionate one and I wanted to ensure that I supported them with Skein. Next up will be the MacOS port (which I suspect won't go quite so smoothly...).

After getting some very valuable feedback on all aspects of the game from a friend of me (John Bell to be precise) I modified and update the HUD. It's still essentially the same, but it's got a bit more colour and the spell layout makes it easier to associate spells with gamepad buttons.

I'm pretty sure that this is now the definitive UI, so I hope you all like it!

I've always disliked the sprites I've been using for the "spawners". they were all very drab and boring and a bit too small, when what I've always wanted was something that would stand out and make the player notice them - something important since you'll probably want to take them out before mopping up the mobs they've spawned.

So I started drafting out some new ideas and eventually came up with this: 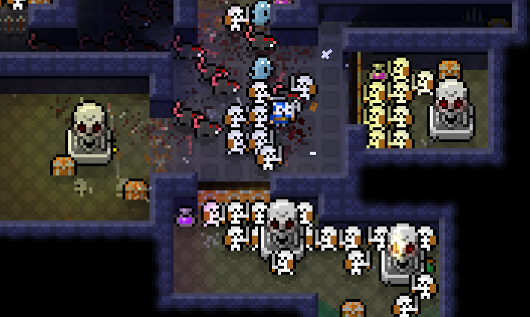 That's a big improvement (imho), but I still felt they should be more colourful, especially since the game is pretty colourful in general... so I experimented a bit more until I finally came up with the following set of spawners for each of the current four enemy classes: 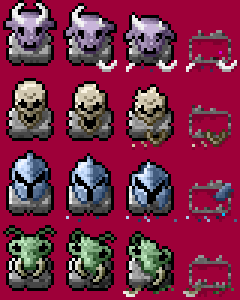 I'm pretty pleased with these - although I suspect I'll be revisiting them and changing a few details - and I hope everyone else likes them too!

And what am I working on at the moment? SOUND! Yes, Skein has almost zero sound effects, and it's very, very noticeable when you play without music... so I'm currently working on resolving that and getting some kick-ass effects in there.

My main problem is that I've left it a bit late and now have to revise everything I've done so far and assess what sounds it needs and add them. Normally I'd add sound as I go along, so that if I add a new spell - for example - then I'd add a sound effect for it at the same time. However I've been so caught up in the programming side of things that I've neglected this area and it'll only get worse if I don't get back into the habit of adding sounds as I go along. This in turn means that there is a bigger risk that the final game will ship with missing or low quality effects... and that's something I don't want! So... sound is my priority right now.

Thanks for reading this, and thank you again for your continued support. The game is progressing nicely and I'm still loving working on it, so hopefully I'll be able to get it finished so y'all can play it!