This is about Misshoni, a short co-op Metroidvania with emphasis on teamwork and getting by with help from your ally.

Misshoni will be a short co-op Metroidvania with emphasis on teamwork and getting by with help from your ally.

Hello. I'm SolarLune, the developer of another game in progress, Soldier Of. I've paused development on Soldier Of to try something different. Namely, to make a game in a month, which is this one, Misshoni. Perhaps it's a stupid name, but it comes from the word "Mission", and the word "Isshoni", which means "together" in Japanese. I started Misshoni a few days ago. It probably won't sell for very much when I'm finished (I'm thinking $2-5). As usual, I'm using the Blender Game Engine for this project.

^ The game as it looked yesterday.

You will be able to play with a buddy, or go it alone with the CPU controlling P2. While the main gameplay will be the usual combat-oriented Metroidvania, there will be some co-op techniques, like standing on each other to reach higher areas, reviving each other when downed, or pulling each other up ledges. Think something like Cave Story + ICO, but your partner is as capable as you are.

The really tentative plot (i.e. it's not formed yet) is that the main characters wake up having been transported to the ruins of a floating city by an unknown force. They have to figure out a way home.

^The main characters, as they looked yesterday, hah.

At the end of the month (October), I plan to release it in whatever form it is (demo, alpha, finished, whatever). I might go back to Soldier Of then, unless I'm really close to finishing Misshoni, or if people really like the project. I suppose I'll also be doing this for Ludum Dare's October Challenge, which is to get a game finished and monetized by November 1, or something to that effect - the rules are a bit vague. I'm starting to doubt that I'll get Misshoni 100% finished in a month, but I might be able to get it to a release-able level, anyway.

So far, I have a pretty good amount finished. I have movement, jumping, air-time (hanging), shooting with a weapon, and aiming. I started on this a few days ago, and it's been going pretty well. Today I implemented better tiles (you can compare them with the ones above), trees, and added in the first, basic weapon.

^Showing the movement and shooting system in action. Also, the (obviously) work-in-progress background. 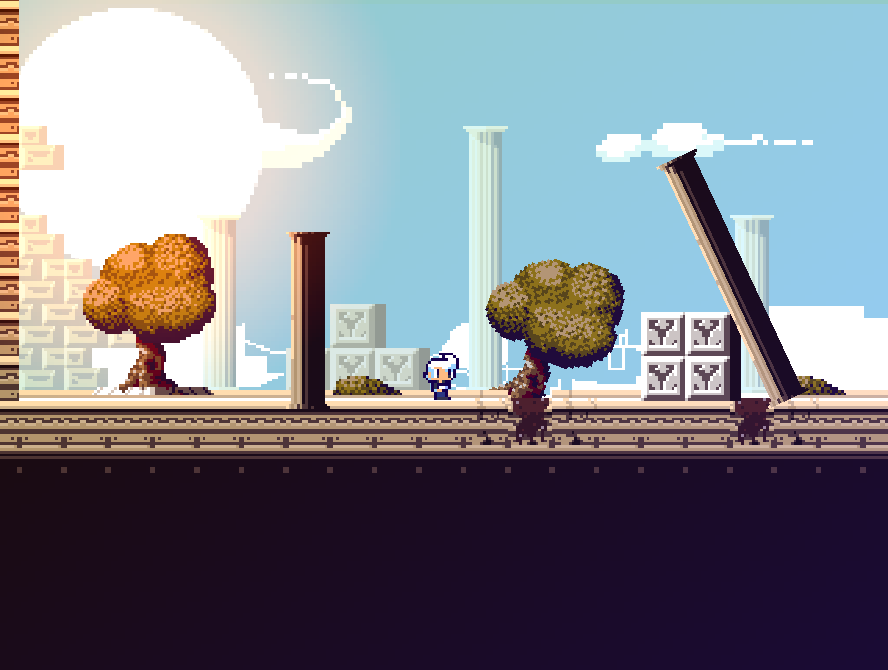 Looks beautiful as no tomorrow!
And I love metroidvanias.
I hope you won't make it a puzzle-platformer, though...with the co-op and all :/

Thanks. While it wasn't going to be a strongly puzzle-based platformer, I think it would work well together with the co-op mechanics. Portal 2 did well with co-op puzzles, right?

I'm excited that I can play this within the month. Can't wait!