Post news RSS What is 'Gods of the Fallen Land'?

Gods of the Fallen land is a village building action-strategy game. In this article I'll be covering the basic mechanics of the game, so look it over and let me know what you think.

Posted by CrowsKeyStudios on Dec 9th, 2015

Hello, and thanks for taking the time to look at my game. Gods of the Fallen land is a village building action-strategy game, it takes inspiration from RTS games, top down shooters, and village building/management games. In this article I'll be covering the basic mechanics of the game, so look it over and let me know what you think.

This is the player character. You directly control the movement of this character through the 'WASD' keys. You interact with the rest of the game in every way through this character. The Player can order villagers to build structures, assign villagers jobs or tasks, directly attack enemies, use several cooldown restricted abilities, and issue special commands. If the player dies in combat they will have to wait a short period to respawn, the game will keep playing during this time.

The Villagers are the lifeblood of your settlement. Villagers collect resources, grow food, and can be assigned a wide variety of combat and support roles based on the buildings you have built. You start the game with 5 villagers, the population cap can be raised by building more houses. However you must have enough food to support your growing population, or else people will begin to starve. 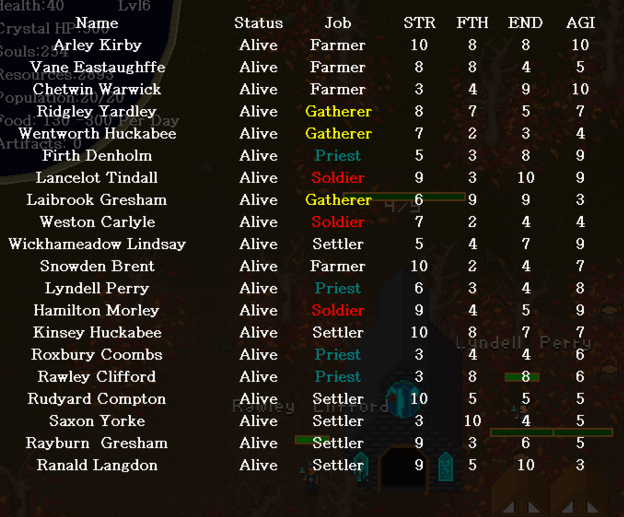 Every single villager also has their own unique name, appearance, and stats. Those stats are Strength, Endurance, Faith, and Agility. These stats can be improved by doing certain jobs and also affect their ability to perform certain tasks, but more on this later.

Throughout the game you will be attacked by various creatures from the Fallen Land. For the first part of the game attacks will come slowly and almost always at night. This will change in various ways as you progress through the game. Threats will grow the longer you survive in the Fallen Land and the larger your settlement grows. 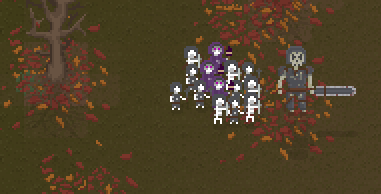 You must defend your settlement, but it would be impossible to do it alone. You must utilize defensive structures, abilities, upgrades, and villagers assigned to combat roles to stand a chance of survival. You earn a valuable resource by defeating threats, however combat runs the risk of losing villagers, hard earned resources, and most importantly losing the God Crystal.

The God Crystal is the heart of your settlement. Without the crystal, there would be no chance of victory. The people are drawn to the crystal. It will attack threats that get close, as well as healing the player if they are damaged. The player will be reborn from the crystal if they happen to die. It also allows the player to spend a resource to level up and unlock new abilities, raise damage, and health. 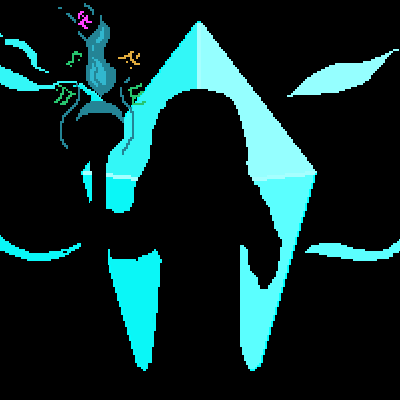