Post news RSS What have we been up to?

Today, we discuss how The Last Spell came to exist, even before the release of Dead in Vinland!

So, we’ve been working on The Last Spell for a few months now. I’m Matt (the creative director of the game) and today, I’ll try to talk a bit about the origins of the project and the main game design intentions we have.

I started thinking about our next game a few months before the release of Dead In Vinland . As a game dev studio, we have to make sure we prepare the aftermath of a project with another project. It means a lot more than just having a vague idea about the concept: I had to secure funds to at least start the pre-production, and so write a good chunk of the game’s concept on paper so that the team would know what to start working on. 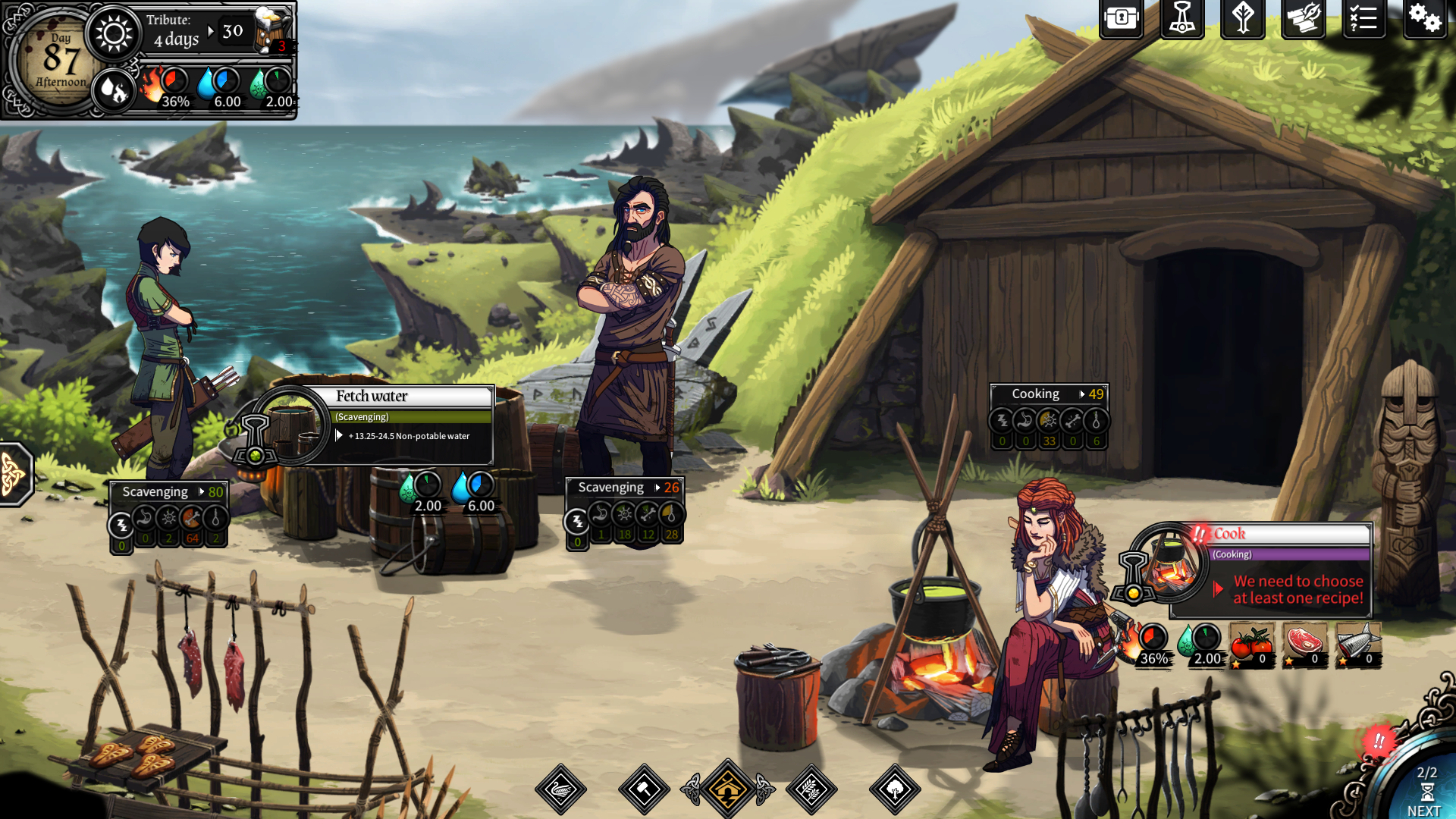 It’s a bit of a weird feeling, because it was a time when we were in full rush to finish Dead In Vinland’s production, I wanted to cram everything I had into the game, but I had to step back a few days and think about something completely different… And talk the team about the concept and get them excited by it too. That was weird, but we had to do it.

But well, everything went well and we managed to prepare the project before the end of Dead In Vinland.

(In fact, when DiV released, it was the opposite feeling: we had to work on patches and DLCs because we committed to it, and couldn’t work on the new project full time, so it was rather frustrating!)

So what was our mindset when we decided on the concept of The Last Spell?

One of the first things I said to the team, is that I didn’t want to make another story-heavy game just after DiV. For DiV, I went way ahead my writing skills and desire… Don’t get me wrong, I had a ton of fun writing the dialogs of the game and playing with all these little characters’ lives, but it’s a bit like with chocolates: love’em, eat’em, until you get sick. 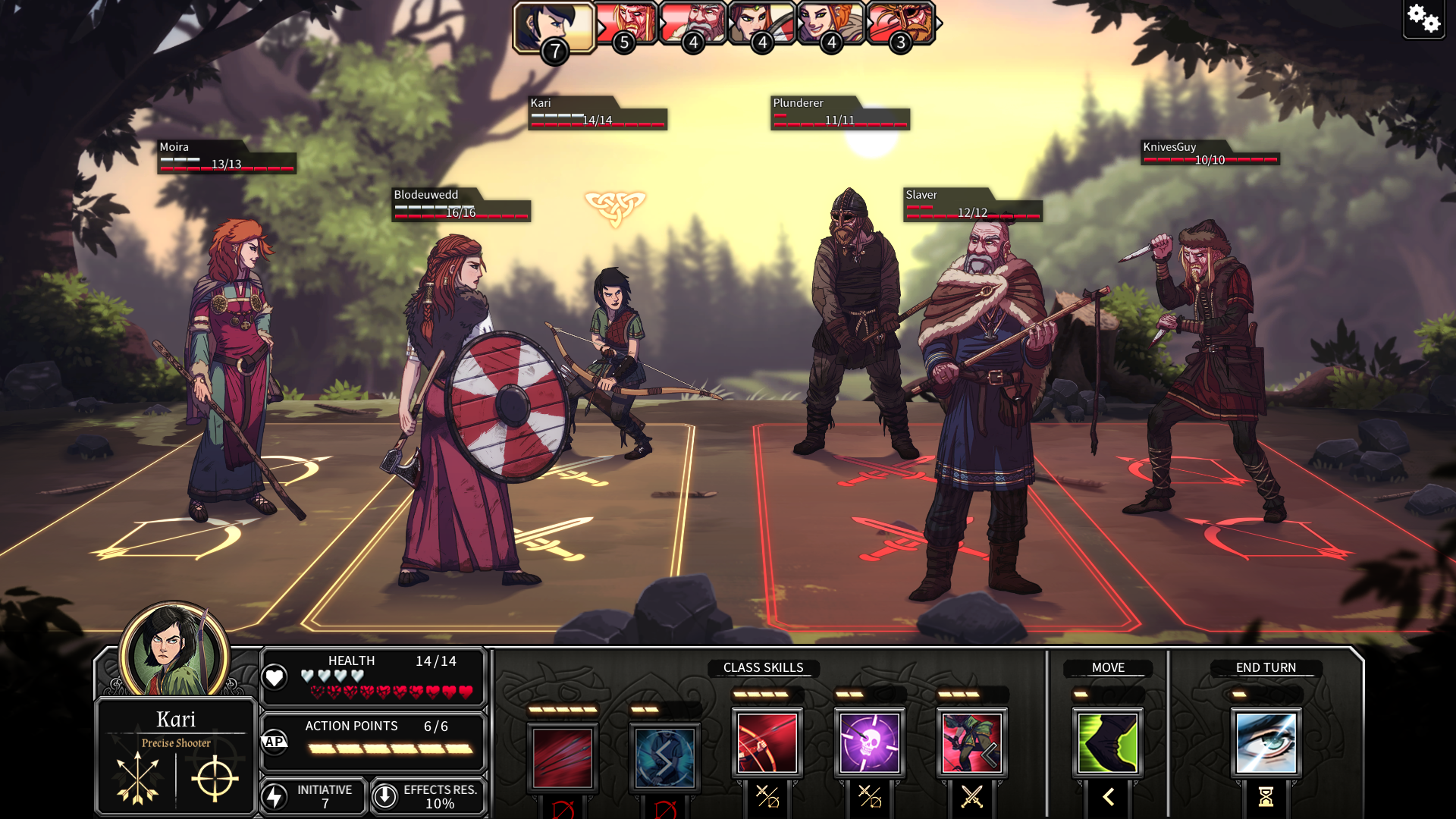 So yeah, first intention: “gameplay first, narration next”. The other intent, is that I wanted to really focus on combat-system. In DiV, we made the first steps in this territory. I am very happy with the result, but I understand some players complaining about the lack of depth of the battle system: it was just not meant to be too deep, because it was not the main focus of the game.

So for our next game, we wanted to focus more on battle mechanics, along with our own RPG system (abilities, skills,…).

So yeah, I knew that I wanted to make a turn-based tactical RPG. That’s really my main genre, I think I played nearly every T-RPG on GBA, NDS, PS1, PS2, PS3 and PC… That’s my thing. 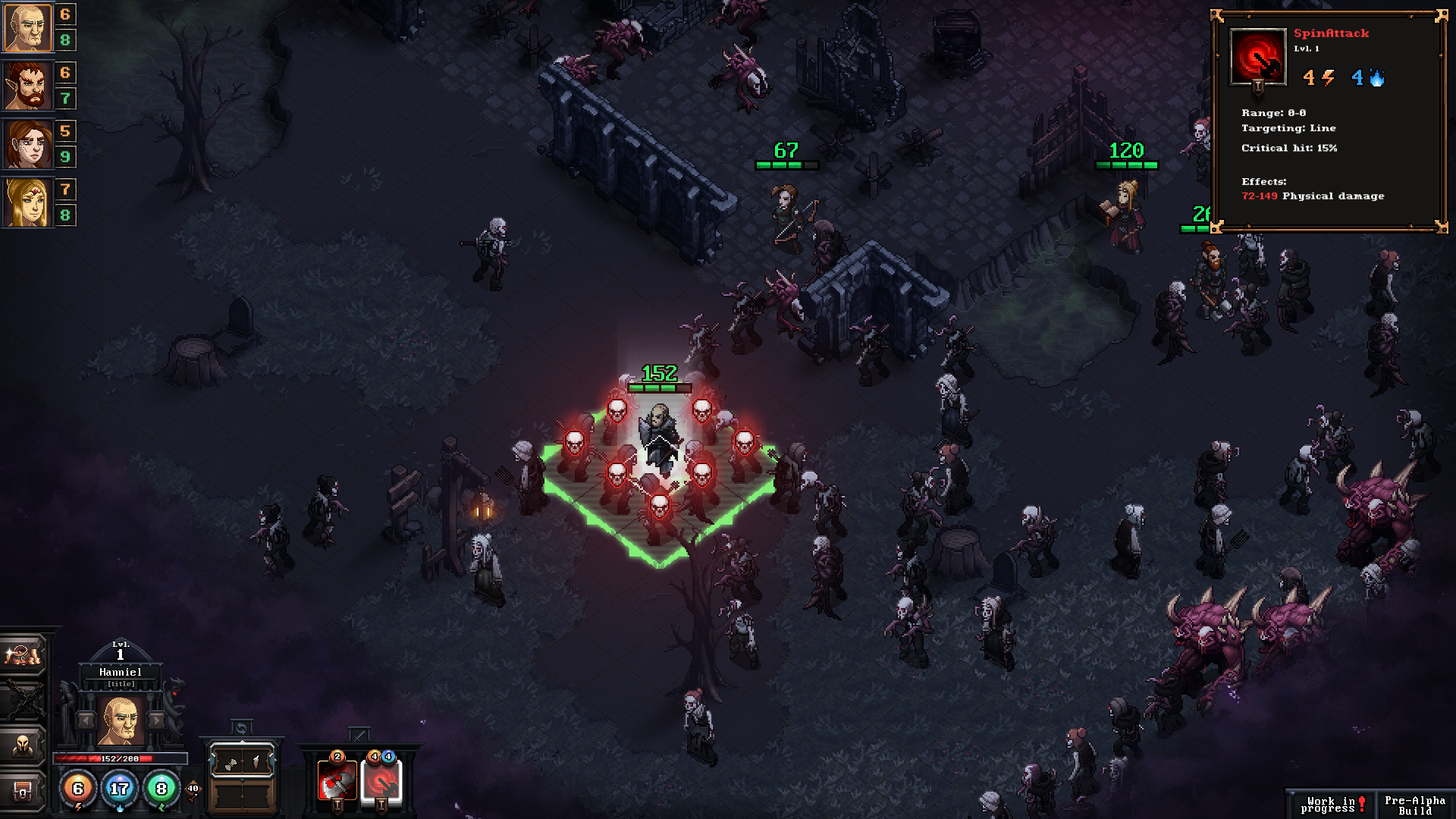 The Last Spell will be a turn-based tactical RPG

But I also knew that it’s a VERY complicated and costly game genre to do… a lot of systems combined with each other. We had to find some shortcuts to be able to make something good considering the size of the team.

That’s when I thought about the setting of the game. What could be original? I had this idea of a post-apocalyptic game in a fantasy setting. A mix between Warhammer and Fallout. So yeah, big explosions, nearly every living being wiped from the surface of earth. Radioactive magical fallouts. Mutated monsters. Cool! And so all the parts came together nicely: a tactical RPG where you defend the last city of earth, in ruins, against hordes of evil creatures. No story, just fight for your life, in one single map.

Of course, the basic idea extended easily: we could think about city building elements, which would add a nice touch to the game. You can have scarce resources, so there would be some sort of survival aspect to the game, or at least optimization. But the key feature that I wanted was to really have this overwhelming feeling of “all is lost”, a bit like in the Battle of Helm’s Deep: a few hardened warriors against tons and tons of enemies!

This asymetry is quite rare in turn-based strategy games, so I thought it was strong enough to build a whole game around. And challenging for our team (they hate me now x)).

One last element we put into the game, we clearly wanted to have a shorter game, but highly replayable. That’s something we wanted for our Dead In games, but quite never perfectly achieved. So when you say that, the first word that comes to mind is “roguelite”… Short, procedurally generated, very hard runs. It worked well with the concept too of a “nearly impossible mission”. 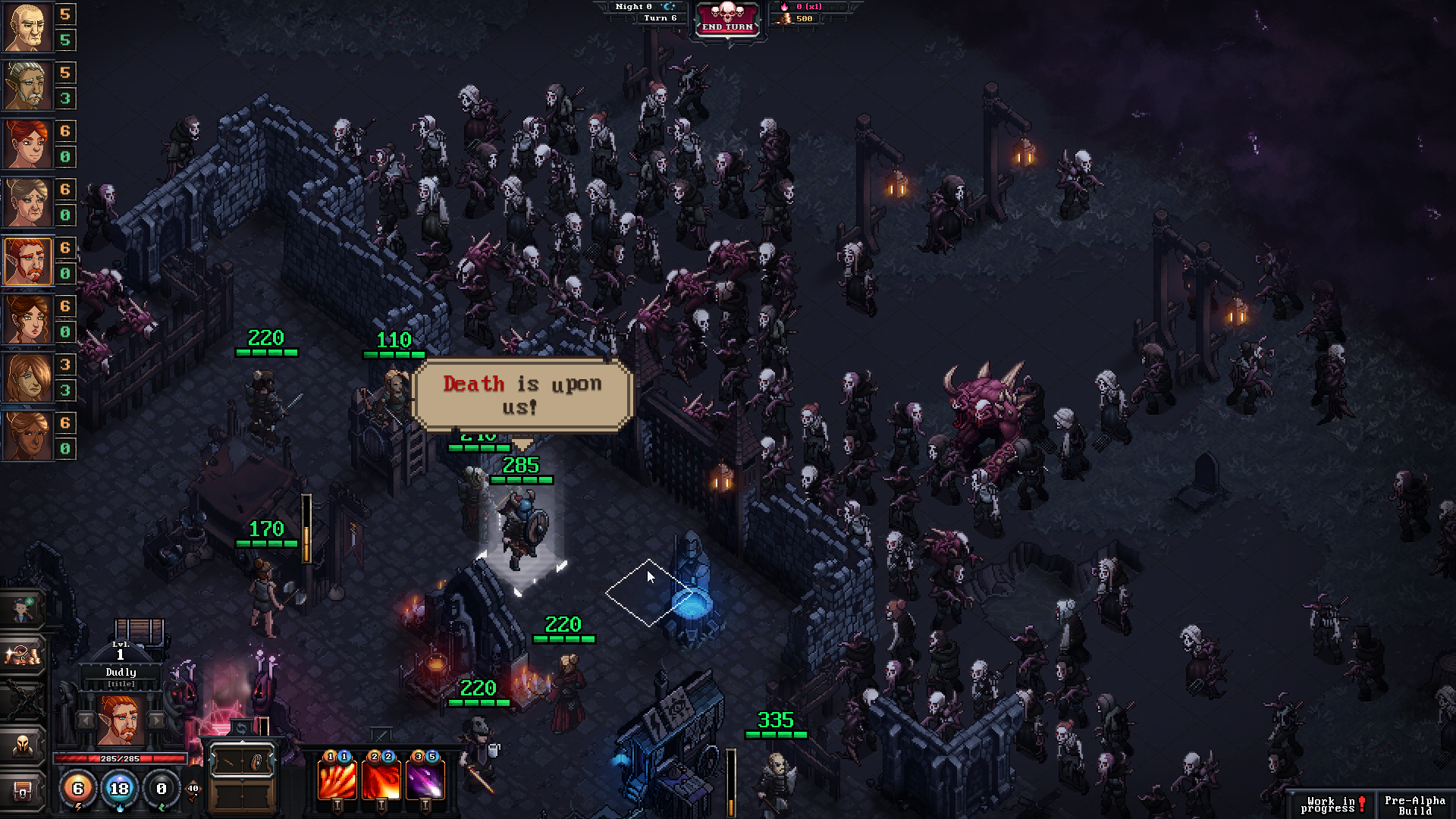 There will be a LOT of enemies, so you will die a LOT

I am not a big roguelike type of player, but that’s about the time when we played A LOT of Slay the Spire (and Into the Breach) at the office, so… I think I kind of got bitten by the roguelite radioactive spider… I just added one constraint to the team: I want a lot of “meta” gameplay. I want that everytime I play and lose a run, I get the feeling I gained something, and I am excited to try a new run. So we aim to have a lot of unlockables and surprises to keep the game fresh and fun after dozen and dozen of runs. That’s something important for us. 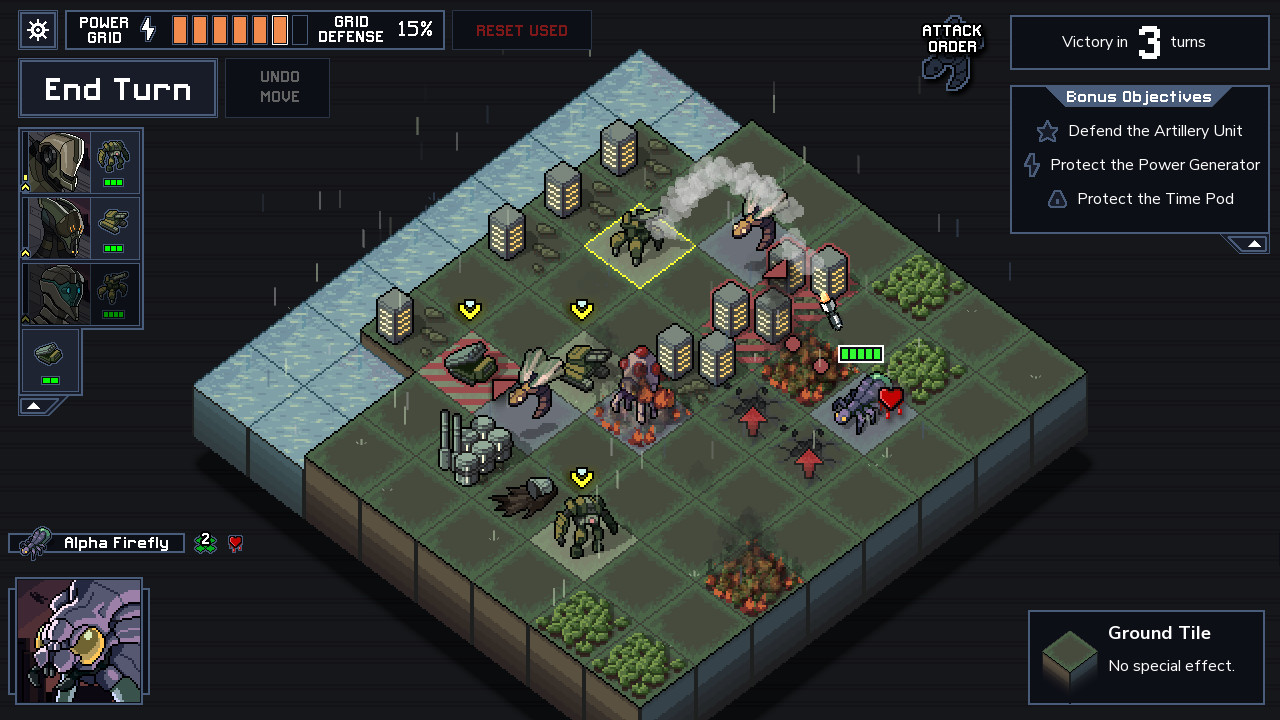 So yeah, basically that was the genesis of the game, the basic intents were decided, I presented the idea to the team and they liked it, and of course we discussed it a lot during the following weeks so that everyone would bring his little something to the project.

Okay, I think it’s good for now! Next time, I’ll talk a bit more about the world-building of the game I think, and some of the “non videogames” references I had.

You can follow us on Twitter or you can come to our nice little Discord Server if you want to chat with us, so that you’ll be informed in time about new blog entries and important news.

One thing’s for sure, we’re super excited by this new project and we hope that you’ll be too! Can’t wait to show you more of it.

By the way, if you’re excited about The Last Spell, don’t forget to wishlist the game on Steam, it’s super helpful for us! 🙂