SpaceSlog is now on IndieDb - We will be posting updates here semi-regularly.

SpaceSlog is a passion project I have been working on for a couple of years now, from design phase to where we are now. Below you can read a little as to why I have decided to create SpaceSlog. Please note everything on this page is a work in progress, this game is still in early development.

I have always enjoyed games such as the original X-COM. I remember playing that game for hours in my bedroom on the PS1 (much to my parents annoyance) but always wishing there was more, or different things you could achieve, though honestly I feel like this with most games I play. As computers have became more powerful the type of game I have always wanted to play has become much more viable and slowly those games have started to surface. One of which being Rimworld created by Tynan. I backed Rimworld as soon as it went to Kickstarter and I was very excited to see what it would become. Whilst that game is excellent and Tynan has done an awesome job creating it, there was still something missing. It was still not that perfect game I wanted, although it came pretty close! I then discovered Starship Theory. I waited a while before trying it out then decided to jump in and give it a go. Whilst the ideas were brilliant, I did not think the execution was great and again I was left wanting more.

Merging Rimworld and Starship Theory whilst including a few small changes, we could get pretty close to the kind of game I have wanted to play. There are several other games that come close, such as Star Command, Space Haven, FTL plus many more I have tried in the past but none of them seem to capture that game I have been waiting for. So in comes SpaceSlog, the game I have waited so long for someone else to create. The true love child of Rimworld, Starship Theory, X-COM and all those other great games I have loved in the past. Other inspirations have come from TV shows such as Firefly, Stargate Universe, The Expanse and Battlestar Galactica.

As always this has now turned into a game I really want to create, rather than just play. I want to explore how different characters will interact and react towards each other when stuck in a tin can for months on end, possibly on the brink of survival. How this will effect the mental stability of your crew and the ideas of seeing different alien life for the first time. These crew members should be few and each loss should be felt by the player. 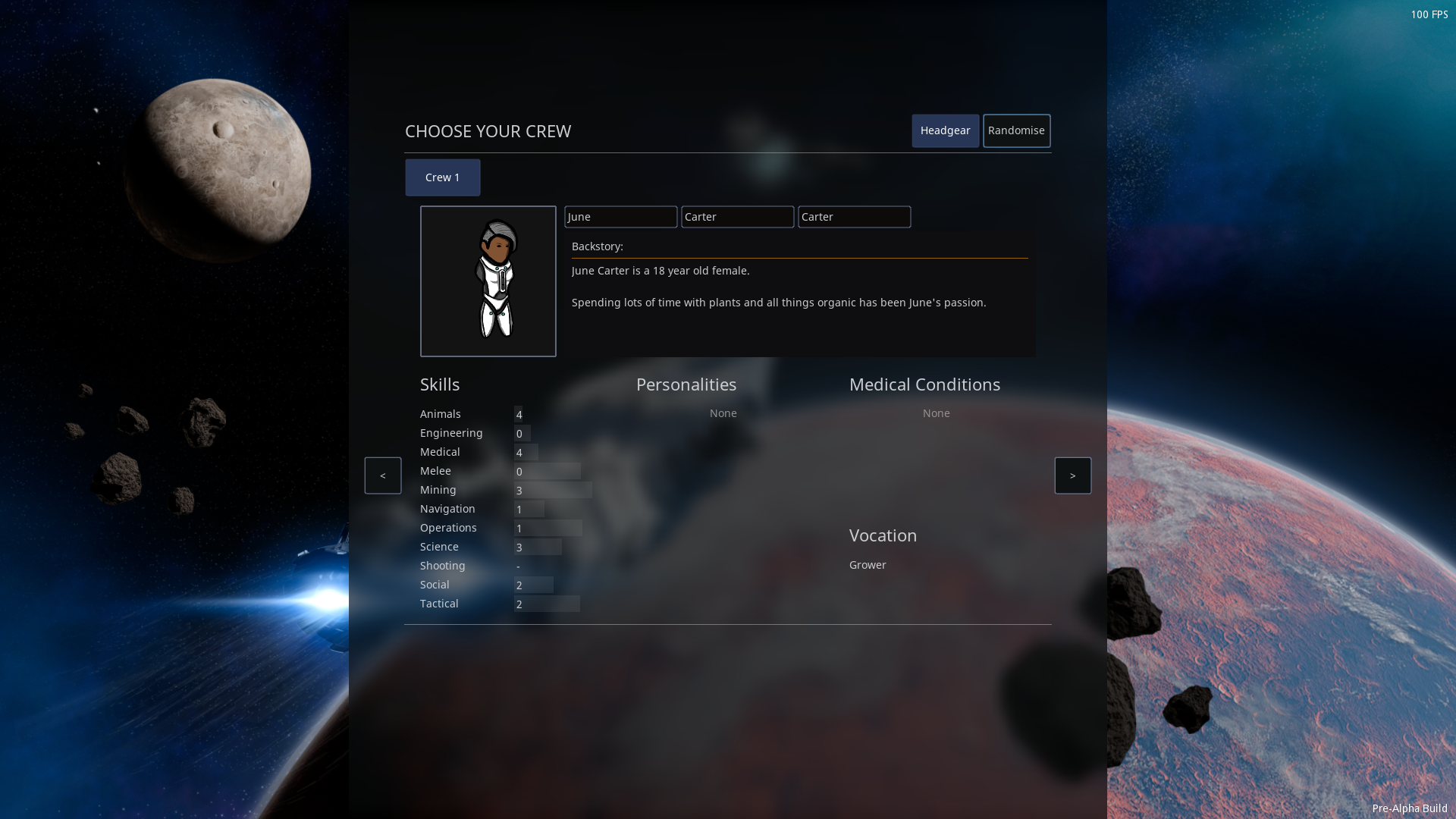 An example of the crew selection menu. (wip)


Spacewalks should be scary as should interactions with other ships, whom could be hostile or harbour human eating pirates. Different characters will have different personalities or traits depending on their background, maybe you come across a low gravity planet you want to explore, should you send those that have grown up in high gravity or low gravity atmospheres?

My background in gamedev has come from modding games, with this in mind I have created SpaceSlog from the ground up with mod support at the forefront. Everything will be moddable from adding new items or alien races, to adding all sorts of different components to any of those items.

If this sounds like a game you would love to play you can find out more info Here.