In today's weekly update: Changes to the saving system, new additions, and more.

Time for another update. This covers some technical aspects.

Short version: Almost done. Long version: I have changed the format to avoid some confusion and while I have moved the default save file location. Due to limitations, I can’t yet place it on the My Documents/Saved Games folder. I have to wait for a script update and until then, I may not be able to ship the feature on the next update (hopefully on the near future, it will be added on a future update). A save transfer tool and/or a guide we’ll be available at the time of the feature activation. I also did a small UI tweak on the menu. Here’s a mini preview: 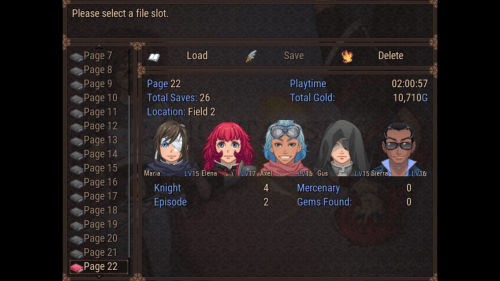 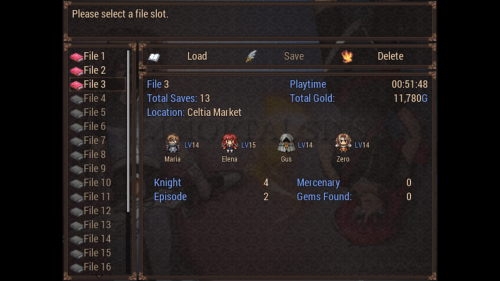 Speaking of saving, I’ve also squashed a bug present on the prologue, where the save command on the menu would show up when you can’t use it.

I also thought to bring some unique abilities to each character. These are passive. You may have already seen that in action: Jena receives less physical damage per hit.. A few examples:

-Maria can use recovery items and be 5% more effective.

It needs some work but I’ll see.

I’ve added some sort of AI on some enemies when exploring dungeons and some areas. This mostly for a stealth system (basic but workable). In addition I managed to make ships movable on the sea. There is a bug with the priority to iron out (if possible to fix), but it pretty much works.

If you are wondering what’s going on with the bug with the mother blocking off the exit of the home, I have fixed it, but I am doing a bit of an overhaul on the eventing, and the fix will be shiped with the Disc 1 update.

Along with a fix, I’ve also tweaked the vocabulary make way for the scroll bars. I will also introduce a quest menu (referred to the game as missions menu) in order to track side-missions. I might expand the Diary option to not only allow saving but also track main missions (or story missions if you prefer).

I did some tests and I can confirm that the game is compatible with Windows 10. Please note that if you use the Insider Builds, I cannot guarantee optimal operation of the game due to lack of a sample and to the trivial stability and compatibility. Obviously the next update will come with some compatibility updates (especially on the launcher and the installer), however, I may drop support Windows Vista support. I will let you ASAP.

That is all. See you on the next update.