A lot happened on different ends this weeks. Our pixel artists created some nice effects for the heat element mode. They also made new environment graphics, whoot (Pictures inside)! Our programmers working on optimizations and the, of course, the menu!

Hello and welcome to another weekly update!

Before we go on, an important message: Since we’ll be more busy with studies, we will post biweekly updates from now on. We still might have some posts in-between, but not necessarily with game updates. Of course, we’ll continue with weekly updates, when we find more time for CrossCode again.

For a change, we thought we’d make the whole update a bit more personal. So who exactly is doing what?

R.D. is currently working on the menu, making progress with tedious stuff like scroll panels (it’s too bad we can’t simply use HTML here, but nope: no support for blocky pixels D:).

I (that is… Lachsen) started working on the technical foundations for a guard option during battle, next to some integration work here and there. Also some optimization (our menus caused some serious slowdown – even when invisible).

Intero is continuously working on improving the (actually already pretty neat) soundtrack of the tech demo. Here you find another preview of the BGM running during all those puzzle segments.

We also got a couple of pixel artists who contributed a lot this week: T-Free and TQ… who we kinda missed to properly introduce so far. We’ll catch up on that later! (avatars are WIP~)

T-Free already helped us a lot already before the release of the first tech demo. He contributed some some really amazing effects. Now he’s back and sets our whole ball-throwing business on fire… quite literally with some ”cool” heat element-mode effects: 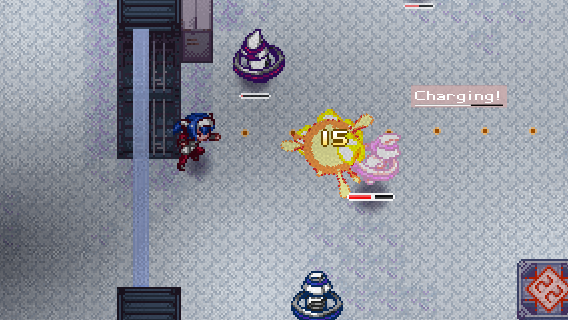 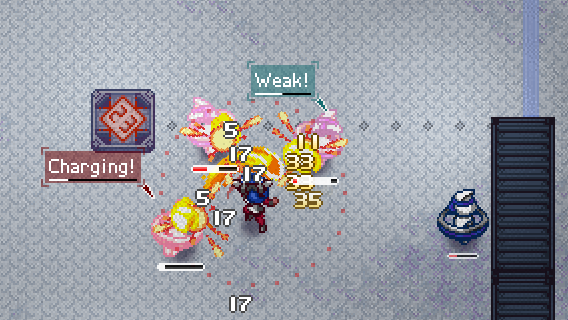 Looks good? You gotta see that in motion. Yeah… we’ll provide a video once we have some more effects done and polished.

TQ/Teekuh/Vintal is another pixel artist helping us with environment graphics. This week he created some fancy text and logos for our new cargo ship scenario:

So… what do you think that logo is? :D

We also had a really productive planning session this week, discussing aspects of the story as well as gameplay.

For instance, we decided on how exactly we want to integrate special techs into the battle system. That’s right, next to “real-time element change” you’ll be able to perform specials skills apart from the usual ball throwing – but those won’t be for free. You’ll consume Special Points (SP) whenever you execute a special skill – kinda like mana or magic points (MP). However, you will only have a pretty limited amount of SP and many ways to regenerate them quickly. Thus, there is little advantage in saving SP. The whole idea is to avoid the usual “MP saving” behavior that you find many classic RPGs. Because where’s the fun in battles if you ignore all the fancy stuff to preserve your MP!

Actually we’d like to know your opinion on that one.
What kind of “special skill/magic cost system” do you like?
Classic MP? Cooldown? Or something else entirely?

That’s all for this week! Again, progress updates will continue biweekly from now on. In between we plan to have some other posts, discussing some design decisions of CrossCode and maybe game design in general.

Skill/Magic Cost System - Charge/Cooldown method. Like you mentioned, "where's the fun in battles if you ignore all the fancy stuff to preserve your MP!" I'm a hoarder by nature in most games that I play. I don't want to use my MP, or items, or anything that I collect in my adventures. If I'm playing an RPG (say, Etrian Odyssey IV), I hardly ever use any of my skills/magic because I want to make sure I have the max amount of MP available *just in case* I need it as I get deeper into whatever dungeon I'm in. So, what ends up happening? I never use any of it.

Of course it comes down to the style of game you're wanting to make too. Do you want the player have to manage their resources and then do you want to have to balance out when/where/how the player earns back those resources?

Or would you like the player to be able to use what they've earned/unlocked when and how they see fit and then balance around knowing what they have available..?

We definitely don't want the player to preserve all resources. That is kinda lame since you can't do awesome stuff right? So we plan that SP will recover by attacking enemies or outside of battles. It worked pretty good for Kingdom Hearts II we think. You could spawn fire spells an then you wait until the MP bar is refilled. So you don't really need any items here.