The last two weeks have been incredibly productive. I started to work on the basic enemy movement and mechanics and surprisingly things went so smoothly that I recorded enough test footage to make a decent trailer. I think it conveys the spirit of the game well enough to see what the market is like for something so niche. I'll see what the audience for action arcade tactical tower defense is even though I must say that the Steam comments have been very nice and the 'Yes' vote percentage is about 30% so that's encouraging. So in the end if I can get greenlit ChopperSquad X can probably find a audience. (Check out our Greenlight) 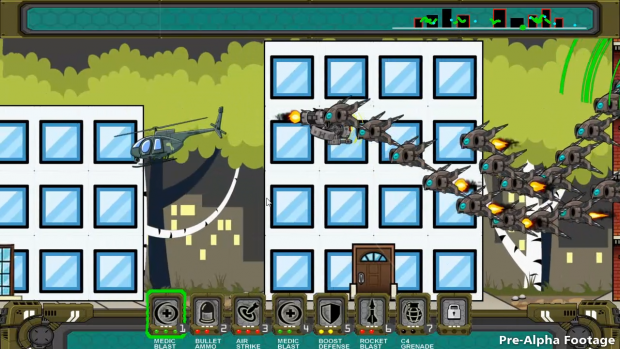 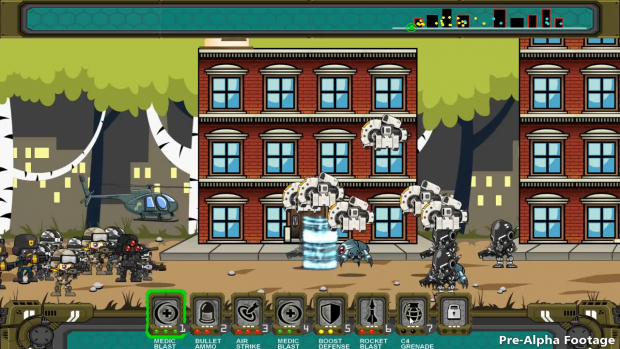 OK, back to our regularly scheduled programmings.... After the last break I wanted to basically get most of the things that happen outside of the buildings working. Because the game has inside/outside strategy showing even one side would display most of the basic controls and give viewers the design direction. The first thing I did was dig through the assets I had available (I've been picking up random graphics all year) and saw some that would be perfect for creating drones and another set that for some strange reason I immediately saw as teleporters. I always like it when ideas come to you instead of being forced.

The drone movement is procedural and calculated with a simple sine wave. Adjusting the wave amplitude/height and drone speed gave me a perfect basic enemy. The movements is predictable enough that it gives the player ample opportunity to avoid collision. I plan on adding more drones that stop, hover and attack the player but even the basic was pretty impressive (especially since it kept hitting me). I added 3 drones that are randomly selected but didnt realize until after I made the video how much I preferred the darker one (to me it looks very snakelike when it moves). 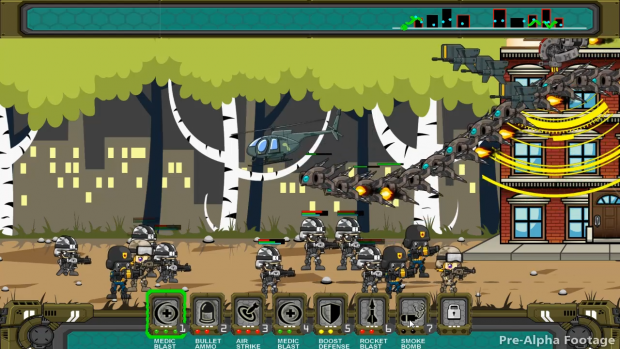 Next up was the mini-map. I realized quickly that part of the reason that the drones were hitting me was because of them coming from my blind right/left so I tackled the mini-map issue. Since the buildings are randomly generated. I needed the map to scale depending on the play field content. I keep all of the building info using memory buffers which are incredibly fast. In fact at this point no matter how much I throw at GM:S it handles it with no problem. I am really impressed. I'll also admit that I purposely place the the CPU cycle killing computations in the init code for a routine so it only runs once instead of every step. I stuff as many things as I can get away with into the init-once state code.

In the background of the above pic is the building patrol drone. For each building I have a randomly selected number of drones that patrols it. Each level the possible number of drones will increase. I had a lot of fun working on the shrinking and pulsing radar. The radar has 3 invisible collision lines that monitor the edges and the middle of the tween expanding graphic. If it touches the player it spawns a 3-20 segment drone sine snake instance. Surprisingly easy implementation that add a lot to the combat experience (even without shooting drones that I thought would be OP combined with drone avoidance). 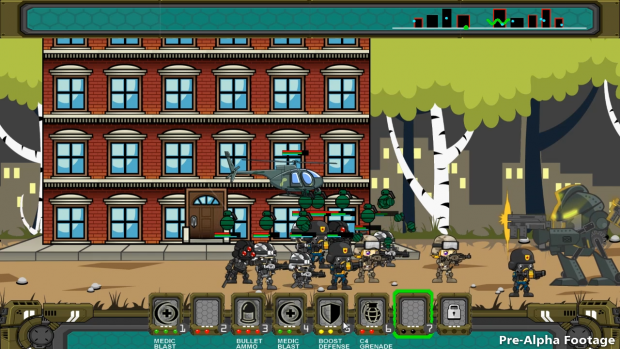 I also did quite a bit of work on the chopper power bar. I wanted powers to internally be easily placed on the bar and expire when used. Also I needed floating dead-enemy powerups to populate the bar. At this point in the coding I was 'in-the'zone' and on a roll (My Rescue-Time log shows I was spending in 14+ daily hours in the compiler. 2X+ my normal). The previous coding came together without too much problem so I was at a good point towards the end of the first week after my last post. I almost stopped working to do a write-up and posting for ScreenShot Saturday but decided against interrupting my momentum.

The first chopper bar powers I worked on were the passive powers that boosted the ammo, health and defense of troops. Those were actually pretty simple since in the last post I had already written the code to have the buff popup overhead the soldier. Adding to the individual stats was pretty trivial. What was work (though not too bad) was implementing external scripts for grenades, smoke bombs, etc (the video demos a grenade). 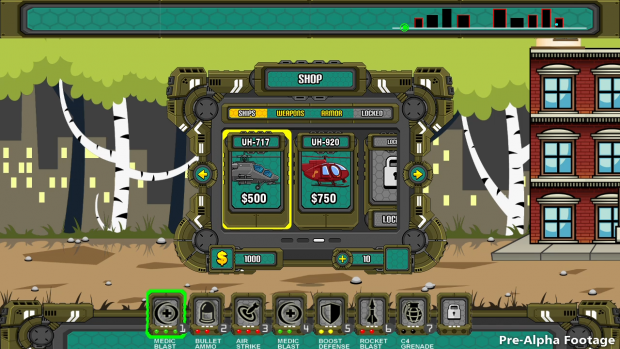 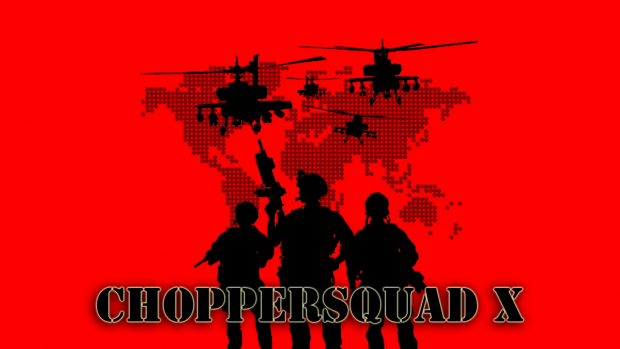 I also implemented the internal chopper upgrade screen. I'm still thinking about when the player should be able to access it (between rounds or during gameplay!?). In the end I was looking at the collection of rough footage I created to view animation timing and decided that it was good enough to make a trailer. I had bought the music and fivver voiceover MONTHS ago and started playing with it in Lightworks FREE (I prefer hard cuts and dissolves so even the basics was good enough for me) so the soundtrack was done.

'Nuff said. Its been a hectic 2 weeks and I got quite a bit done. I would appreciate a Greenlight upvote if you care to visit the page. For the next couple weeks I'll be splitting my time between Greenlight promotion and programming. Wish me Luck!!