The "I Can See the Light" Update. This weeks visual update brings us one step closer to enemy contact.

This week I finally added some basic shooting and bombing mechanics to the chopper. It still needs some tweaking but I was overdue to get started on programming those functions. I also spent quit a bit of time on getting the Chopper Powers bar activated. The Chopper power slots will be critical to player success and are a huge part of what makes each playthrough different since you never know what powers will populate the bar. Most enhancements are locked to a certain slot color so how the player arranges their available slots will change gameplay dramatically. Currently powers dont expire after use but in-game each use will empty the slot. 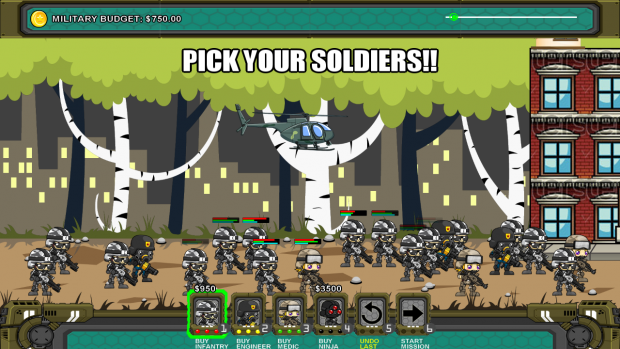 The first step to activating the chopper powers bar was adding indicators so that the player could easily see the effects of powers on the soldiers. It took me a while to settle on the format but decided to create over the head levels for Ammo/Health/Defense. Now the player can easily see the status of any soldier just by getting near them. The bar fades away as the chopper distance increases. It was my compromise to keeping the screen uncluttered. I also added the ability to toggle the bars on/off.

Chopper powers are activated by the player and effect all soldiers within a radius of the player. I'm still debating on the initial radius size but the player will be able to upgrade the radius distance to expand its reach. As shown soldiers within that radius receive the buff/debuff effects. The use of a player restricted buff/debuff systems will force the player to be more active across the field since they would want to ensure that all troops have ammunition and proper defense. Currently I have Ammo/Health and Defense buffs active to test the overhead view bars but have plans to expand to a variety of fun, wacky and useful powers. 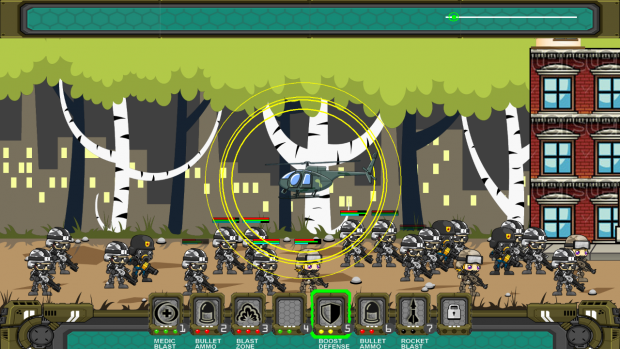 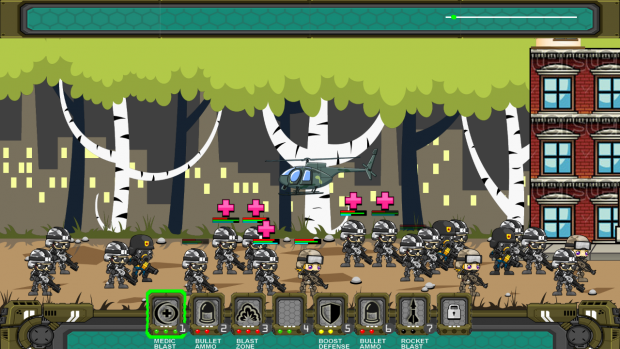 Next up was the chopper weapon systems. I worked on the gun muzzle flash system and a basic gravity bomb. Future upgrades will add more exotic missile types (homing, heat-seeking). My next update should have a fully functional chopper machine gun but I'd be the first to admit I spent much more time on the bomb since I had a kool explosion animation I wanted to see in action. Both system are pretty much implemented but just need some polish. Neither registers hits on the enemy but the dropped bomb activates a pretty decent screen shake effect in the meantime. (Bark worse than its bite) 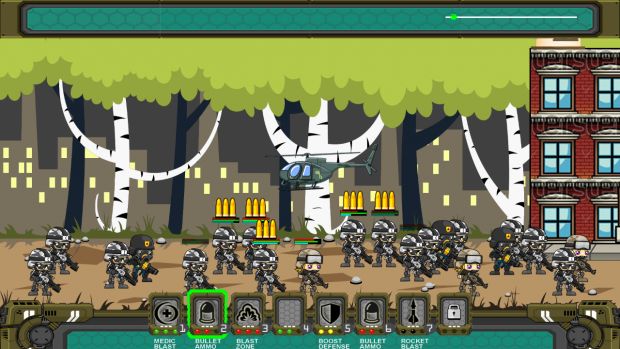 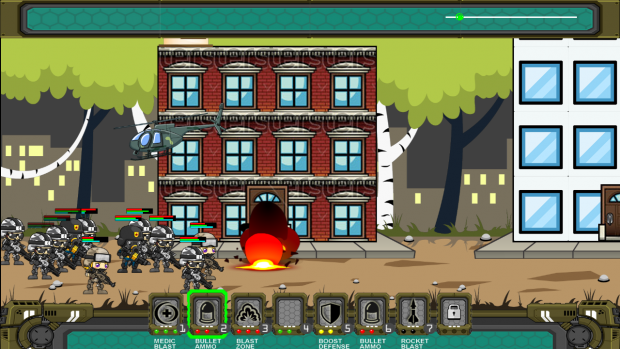 This was actually a pretty fun update. At this 'outside the building' stage almost all the work shows visually which was nice for a change (instead of being mostly under the hood). Seeing the soldiers move around so much has me pretty anxious to get the first enemy waves activated. Next week I plan on focusing on deploying chopper loaded troops to ground and rooftops along with refining the chopper bullet/bomb code. Once thing I can say is how impressed I am with Gamemaker Studio. Its sold as a hobbyist tool but I've been very nicely surprised how effective it can be for professional development.

I'm being very careful to avoid unwanted bottlenecks but I have yet to see any piece of code run unacceptably too slow. The only real complaint I have has nothing to do with the compiler or performance but the IDE. The GML language is mature but the IDE is stuck in small project/beginner mode. I approached GM:S as a programmer and ignored the drag/drop programming mode so I never got a chance to appreciate it but its a real limiting factor as your project expands. So other than the IDE (that doesnt effect the final game quality) I have few complaints about GM:S PC. Its a nice tool.