A quick look at some of the weapons featured in the mod.

After so many updates about the uniforms, I figured we ought to take a look at some of the weapons featured in the mod.

The mod will feature a wide variety of muskets, rifles, pistols, sword, lances and even pikes and axes.
These weapons can be aquired through the usual means of buying them or looting them, as well as the abillity to earn them from quests and be awarded them by faction leaders for outstanding deeds.

In these images you'll see swords ranging from the basic, workman-like sabres issued to infantrymen to the more elaborate épées carried by officers. Firearms from the usual smoothbore muskets to 7-barrelled Nock volley gun and a double-barrelled handcannon (the barrels the better, I always say). 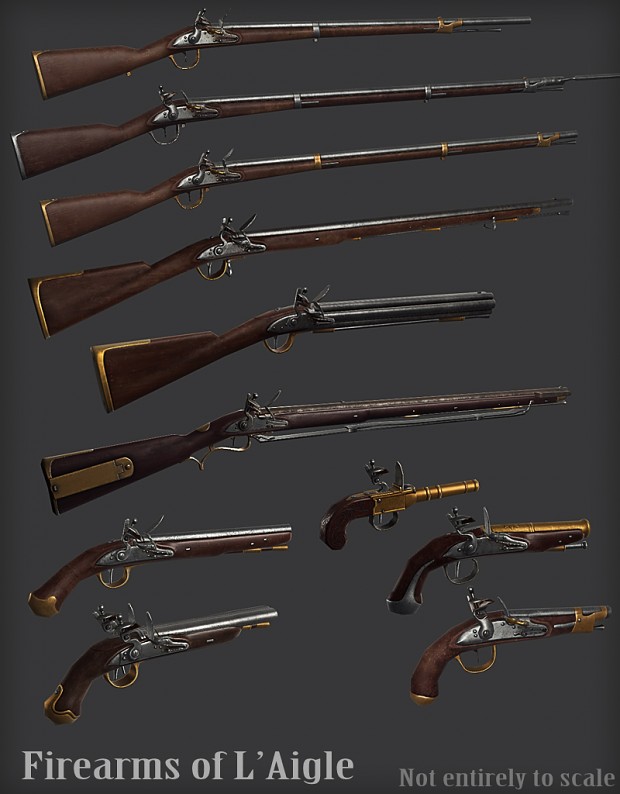 These are, of course, only some of the weapons that will be found in the mod. There should be well over twice the number seen here.

That's all for now. Thanks for reading, and if you want to show your support for the mod, be sure to vote for us in the Mod of the Year!

I voted for you guys. The mod is looking fantastic! This is the sort of quality content Warband has needed for a long time now.

Voted for you as well, wish you luck.

Thanks guys. Also thanks to whomever authed this news post and fixed the formatting. :p

Love the weapons, not sure which will be more fun yet; Shooting Frenchies in the face with a musket, or stabing them in the chest with a Sabre! :D

Can you make it so you can customise Sergeants?

Wow... just wow. I can't wait till this is done. Keep up the good work!

Wow they look like not from Warband! The definition of those textures are perfectly!

I see Sharpes sword and Pat's six barreled musket and that makes me happy! this mod is looking amazing!