So I finally decided to write a little more about what the game has. I'll start with weapon system.

In Military Force the player always has 2 active weapons, called primary and secondary: 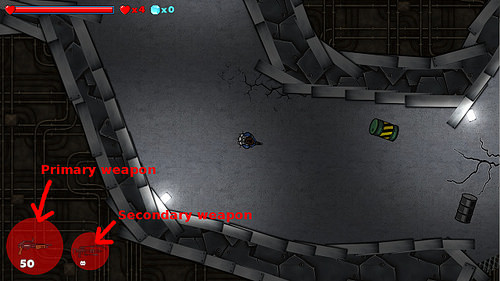 The weapon you start with, very basic and weak, but has unlimited ammo. Good to kill "bullet-suckers", i.e. large groups of small and weak enemies.

Extremely high damage, close-up melee weapon. Unlimited ammo. You won't use this much throughout the game, but there're moments when using chainsaw is the only option you got.

Object manipulator. The most important of all, it has many use-cases in the game. It can be used to solve
physics-based puzzles or as a weapon.

You place it on the floor and when an enemy is near the mine explodes.

When enabled it'll act as wall in front of you, i.e. all enemy projectiles will hit the shield not you. The splash damage from enemy
rockets will also be absorbed.

The player can only carry one weapon from each group.

In Military Force you find weapons throughout the level. Primary weapons are always in so called "weapon stations":

Secondary weapons as well as ammo for primary weapons are represented via ammo items throughout the game, they can be picked up directly
or from ammo boxes:

Besides primary and secondary weapons there're also stationary weapons in Military Force, here's an example of a stationary flamethrower:

All of the weapons described above are weapons that can be used by the player, but there're also enemy-only weapons. But since the topic of this article is "weapon system" enemy-only weapons are out of the question, I'll try to describe them later in other articles. So, that's it for today.

And if you're interested in some aspect of the game, please tell me, I'll write about it.