can you image you can play chinese chess in mountblade warband and the chess is a alive man???!!!

Have you ever seen a TV play called Chess Warrior played by Dicky Cheung, which tells that the emperor likes chess, so he trained a group of chess warriors to play chess with emperors of other countries. The emperors said to play chess, and guards played chess on the chessboard. Then a group of warriors on the chessboard set up in a huge field moved and killed according to the instructions of the emperors to play chess, with the purpose of reflecting both the emperor's chess skills and the skills of the warriors trained by the emperor. Therefore, the rules are different from ordinary chess, and when the practice of playing chess occurs, they are eaten. Therefore, this mod almost means the same thing, and the time is limited, so at present, the experiment is provided first, and both steps and rounds of playing chess are switched and controlled by the players themselves, that is, in the current version, you should set yourself and play by yourself first, get familiar with the settings, or give me advice on interface and control. 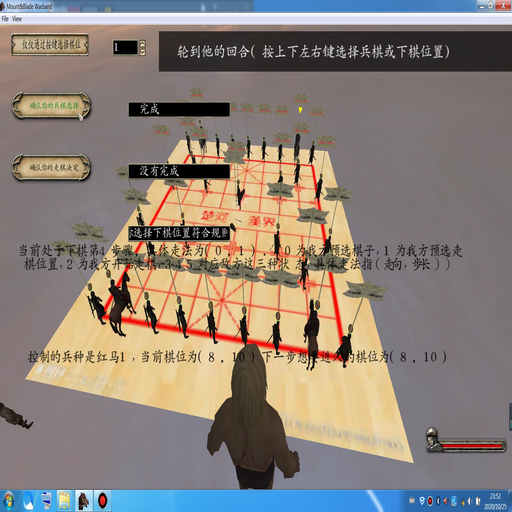 First of all, the enemy and me play chess in three steps in each round. Please do some preparatory work in advance- Preparatory work: The player belongs to neutral observation mode. Press U and the player can move freely in 3-dimensional space regardless of the ground and sky, cooperate with wasd and viewing angle to facilitate observing the game. Press U again to close this movement mode; When the player flies to the appropriate position, press M to call up the chess control interface (press N to close it).

Step 2: Select the chess position: after being confirmed by the button in the first step, press the up, down, left and right arrow keys to move on each point of the chessboard. The initial position is the chess game confirmed in the first step, but you can also use the drop-down selection box and number selection box on the control interface, one representing the direction (front, back, left, right, left, right), and the other representing the number of steps, such as front+. In particular, the front left/front right direction is prepared for xiangheshi. For xiangheshi, step length means adding two grids horizontally and vertically to the current position, while for horses, it is special, such as front right +1 step length, which means adding one grid horizontally and two grids vertically to the current position, while front right +2 step length means adding two grids horizontally and one grid vertically to the current position, that is, the number of horse steps.

Step 3: Click the "Confirm Chess Position Selection" button in the second step to enter the third step, that is, the chess moves according to the confirmed position. In order to simplify the judgment, there are three situations at this time:

Situation A: When you encounter your own chess piece in the path, it means that you should not go like this. The chess is forced to return to its original position. You wasted this opportunity to play chess, and it is the opponent's turn to play chess

Situation B: When you encounter an enemy chess piece in the path, you will eat chess. If you die, you will be eaten. If you eat chess, you will successfully occupy his position.

2. The coordinate points written in the interface text refer to a total of 9x10=90 points in chess, so two-dimensional coordinates are established by point points, 1<x<9,1<y<10

3. The text box on black background prompts you whose turn you are now.

4. The black box text behind the two buttons indicates whether you have completed the current operation. Other settings: 1. Each chess game will be bound with two flags placed symmetrically with fluttering effect, under which the names of their arms are written.

1. check out the code problems of the rules and regulations of chess playing for each soldier and cancel the shielding, which can take effect now. every chess piece (except for the guns to be improved) will directly deprive you of the opportunity to play chess this time after confirmation, and it will be the turn of the other party to play chess (the third text box from the upper left will prompt you whether you have followed the rules or not, if you have not followed the rules, he will ask you if you understand martial arts ... ah bah, do you understand?

2. By default, both sides are controlled by you in turn. However, if you press the B key, you can switch whether to play chess automatically on the opposite side. This state will be prompted at the top. When playing chess automatically, it is the turn of the other side. < The current ai has not done it >, it is only random chess pieces at first, and after waiting for a period of time, it will play chess randomly. Then, when AI automatically plays chess, it will repeatedly play chess randomly until it chooses a position that conforms to the rules of the currently selected chess pieces to play chess, that is to say, it will not be like a player.

3. Then the rules of each chess game can be divided into two categories, one is called hard limit and the other is called soft limit. All the rules except guns and cars are hard limits. As long as you don't follow the rules, for example, if your soldiers don't cross the river, they dare to walk sideways, directly cancel the qualification of the current chess game, and then guns and cars are soft limits, that is, if you don't follow the rules, "the specific performance is that your car goes ahead, there is someone in front, and you want to pass through it."

4. Initialization is uninitialized, such as repairing the bug that the cursor is selected to the position without arms and the chess playing step is stuck with a certain chance after killing chess.

1. Chess pieces that meet too close in the process of moving chess according to the correct position will fail to move chess and forcibly return to the original position, which belongs to the set content, that is, the path is narrow and will not pass.

2. To eat chess is to determine who is the one who eats chess by duel according to the fact that there are enemy chess pieces in the chess position.

3. You can control and select the chess position either through buttons or through the interface. However, pay attention to the fact that you suddenly want to continue playing chess with buttons after operating the drop-down box and the number box of the interface. Don't forget to adjust the drop-down box to the option of "playing chess only by buttons", otherwise the cursor can't obey the button command, and the numerical value of the number box doesn't affect the button control.