Hello everyone! Today we ll have a closer look at new upcoming dungeon "Neon Gardens" and if you are interested you ll be able to watch two and half hours of game development in five minutes long timelapse.

Hello everyone! Thanks for stopping by! Today we ll have closer look at long promised Neon Gardens dungeon, we ll talk about game design and technical difficulties i encountered during development which ll hopefuly explain the delays. In addition you ll be able to watch two and half hours to of Void Raiders development while listening to track from game sondtrack by Bocuma! 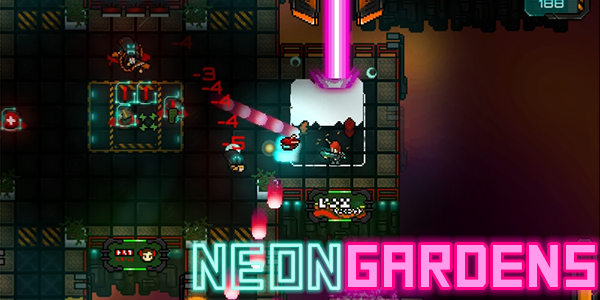 Dungeon comes with its own enemy set of "samurai" warriors. They seem simillar to void industries soldiers but there are crucial differences. Basic samurai soldiers are much faster when compared to basic void ind. grunts, they are firing in bursts and try to orbit player whenewer there is room for flanking maneuver making them much harder target.

Samurai snipers are...well they are snipers but they have added defensive ability, when they feel threatened they disappear in cloud of smoke and reappear somewhere else. However to make things bit easier they can still be hurted and killed even lurking around in their invisible state.

Samurai thugs are very similar to Voidgunners, they are ofcourse tougher and hit harder but they dont adjust their firing angle once first bullet of burst is fired.

There were samurai gundrones implemented as well, but they were removed during testing phase, but more about this decision in next section. 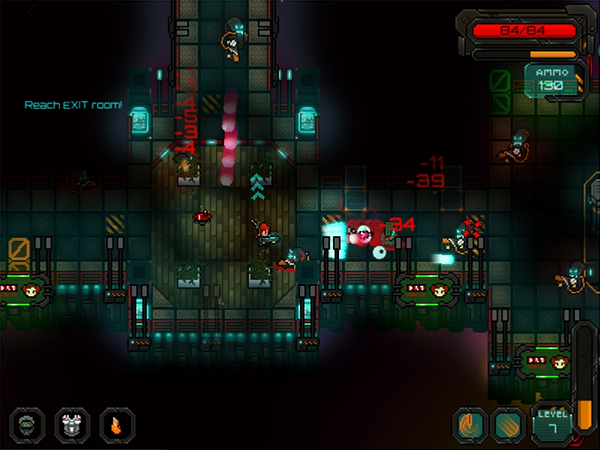 I considered Neon Gardens will be easy to implement when got idea for first time and when i started drawing tileset for this dungeon everything seemed fiting just right and thats why i made a promise of next update containing both new dungeon and new playable character, soon after i realized how wrong my thoughts were.

There was not as many drawing neceseary while preparing this dungeon as its platforms dont have walls which usualy takes most time to design and draw for me but when i started modyfying level generator script this dungeon showed its teeth and that was just start of tide of problems i ll have to solve if i ll want to deliver nice looking and fun to play dungeon.

I ll spare you technical details as most of you would not be interested but i think i pushed level generating method i chose for this game bit further, definetly much closer, or maybe allready behind the edge of my programing capabilities. Had to modify or rework almost every part of this script as now i needed to place light lamps, banners and isles during generation instead of just placing floors and walls like in case of previous dungeons. Still there are some minor issues with it that needs to be solved before release, but they should not give me hard time. 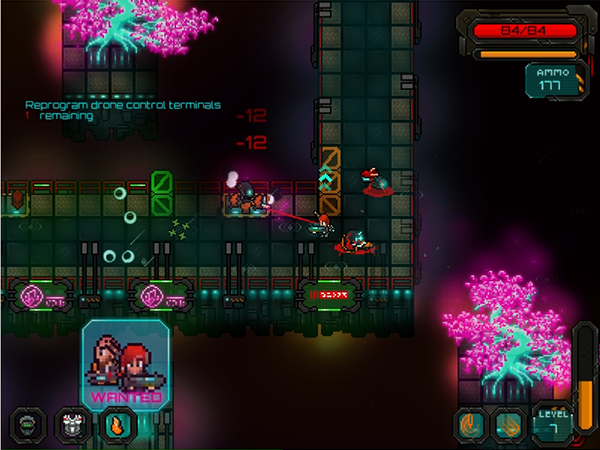 After i had everything working true nightmare emerged. Dungeon sucked! And belive me, it sucked hard! No walls meant a lot of open space, combined with snipers and all of those shooty enemies was not fun at all. I even considered replacing enemies with rippers from last update as melee enemies would solve the problem, however i knew that would be disappointing to release allready delayed dungeon without new set of enemies at this stage of development.

First step was to reduce firing range of basic enemies and remove their vanish ability and pass it to snipers in exchange for their range reduction. Machniegunners were bit tricky i found out if they fire all at once they create patterns of bullets that much easier to dodge than patterns that are created when every gunner have its own cooldown and keeps you constantly pinned down. Now all gunners in range fire at once, you can choose to dodge their bullets or take cover and then move forward before another volley of bullets is shoot at you. Before this adjustment, it was imposible to move through level for every character except for Boris.

Balancing this place was like cooking, as even little changes affected the gameplay feel of the dungeon by a lot and i hope you ll enjoy the meal im planning to serve you next weekend. 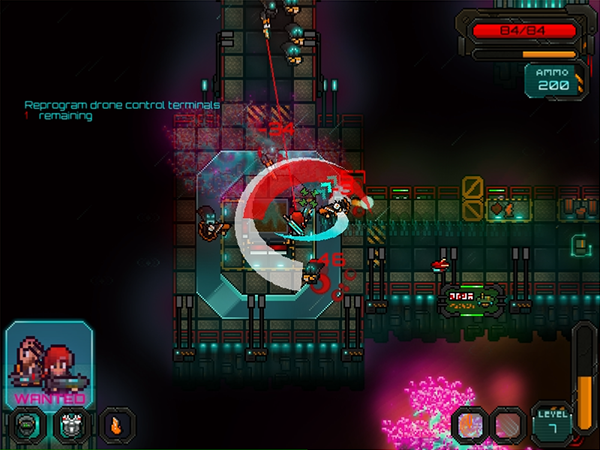 Tina is big issue as she was not even released and allready awaits third rework whitch is main reason for another delay. I was considering releasing ver. 0.39 today instead planner 0.4, but then i decided to take my traditional monday-off as these one day long breaks help me to sort my thoughts and and build priority list for upcoming week.

I really wanted Void Raiders to be on top of that list last week but unfortunately every day some really important real life question appeared almost every day, like mortage, serious illness diagnosis in my family, disappointment by friend and dodging future problems....what more to say? It was not great week. Its a little miracle i was back on track by saturday morning so i visited barber in the morning, had a great burger as a breakfast, had a stop at pet store as i needed to resupply food for both my rabbit and around one hundered of shrimps and started working on a game finaly with clean head whitch resulted in finished boss encounter for Neon Gardens by evening.

As a little apology to you for another(now certainly final)delay i decided to record my whole day spent working on Void Raiders, unfortunately around lunch time i relaized OBS was not recording so i hitted record button again about lunch time and instead of 8 hours long timelapse i have just 2 and half hours long one just in case you are interested in how Void Raiders are made and how chaotic my development methods are:-)

Thanks for reading & watching!