Last Friday we had a big release and we found a couple of issues we wanted to get patched up so we're releasing a new version today.

This version is mainly a fix release, but we did add in one new helpful feature to the minimap. 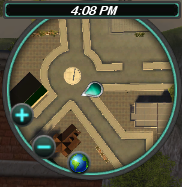 The minimap player icon now shows which direction your avatar is facing. This is a minor update, but this will be very helpful with our upcoming treasure hunting hobby.

- Saved Media list in Media Manager no longer visibly cut off at bottom.

- Fixed issue with item buttons/graphcs not loading correctly on newly added Destinations, Market and Inventory on some systems.