Preschools, breweries and winemakers, updated localisations and a bunch of other new stuff!

New stuff/tweaks:
- Added two new retro themes - Ruined earth and snow earth. They will be tweaked further over time.
- Preschool added.
- Preschool added into demand tree of residential buildings. Theatre, library and museum removed. Citizens will continue to want to have schools nearby, even as the system for calculating education levels is changed.
- Preschool funding option added into policy window.
- Brewery added.
- Wine maker added.
- Beer, wine and hydrogen resources added.
- Entertainment and culture added as local area effects. Views for entertainment levels and culture also added.
- Local area effects weight increased. As more things get moved from the old system of requiring nearby buildings only (called the effector system), it will become more important to keep an eye on having enough buildings to cover crime prevention, health etc. in the city overall, rather than near specific buildings. The weight has increased from 25% to 33%.
- Residential, commercial and industrial priority sets for local area effects changed. The priority sets determine what a building type finds more important. Essentially a weighting system to allow commercial buildings to prioritize low crime over health levels for example.
- Density 4 and 5 now require nano structs to grow.
- Tax effects on industry and commerce differentiated between tax tiers. For example, low tier commerce used to be affected by high tier commerce tax rate. This is now changed.
- Policies targeting industry and commerce used to affect tax revenue. Now they instead affect efficiency, which in turn affects revenue. This makes the connection between policy and effect more clear. Descriptions of policy effects are coming in an upcoming version to make it more clear what affects what.
- Effector capture radius made slightly smaller (This is the radius to check nearby good/bad buildings).
- Education is now calculated from number of available seats (what is seen as produced in schools etc.) and average coverage (local area effect).
- Similar to education, health calculations have now been similarly adapted.

Minor stuff:
- Added more conditions for domestic advisor advice for missing food/drinks. For example, if you have no legume, but also no middle class citizens, the message won't trigger.

Bug fixes:
- Fixed nullref error when citizen is assigned building with no registered bads or goods.
- Fixed world constraint not working properly in retro mode.
- Fixed bug where advisor entries were not closed properly.
- Fixed cost display output bug where values for output would somehow "stick" between different buildings.
- Fixed alternate skybox themes fog setting.
- Ambient sounds trigger fixed.
- Centrifugal particle extractor locked from start as it should be. Researched building after all.
- Lots weren't displaying efficiency, now fixed!
- Fix for issue where on commercial zones and industrial zones, tax revenue would not display.
- Fixed non-duplicable notices (the little things that pop in on the right side of the screen) from displaying more than twice at the same time.
- Fixed default settings for camera control buttons not displaying correct text on first time entering game.

QoL:
- Replaced cycling buttons for resources in trade panel with a window for selecting resources.
- Scroll wheel to move camera blocked when panels are open.
- Pausing and then unpausing with space now returns to previous speed instead of x1.
- Labour requirement now displayed in cost info. This is the requirement when building functions at 100 %.
- Return camera to horizontal position button added in bottom bar.

This version adds a few new buildings. First off, the preschool. This building is required nearby residential buildings. This is the first building featuring a 3x3 foot print, a size that will become more common in upcoming buildings.
With the introduction of the preschool, the way education is calculated has been changed. Before, education was calculated on a city wide level based on education "produced" in schools and libraries etc. Basically a pop / education type formula. Now education also uses the local area effects. You still need to "produce" enough education to cover the amount of students in the city, but also make sure that there is coverage locally. 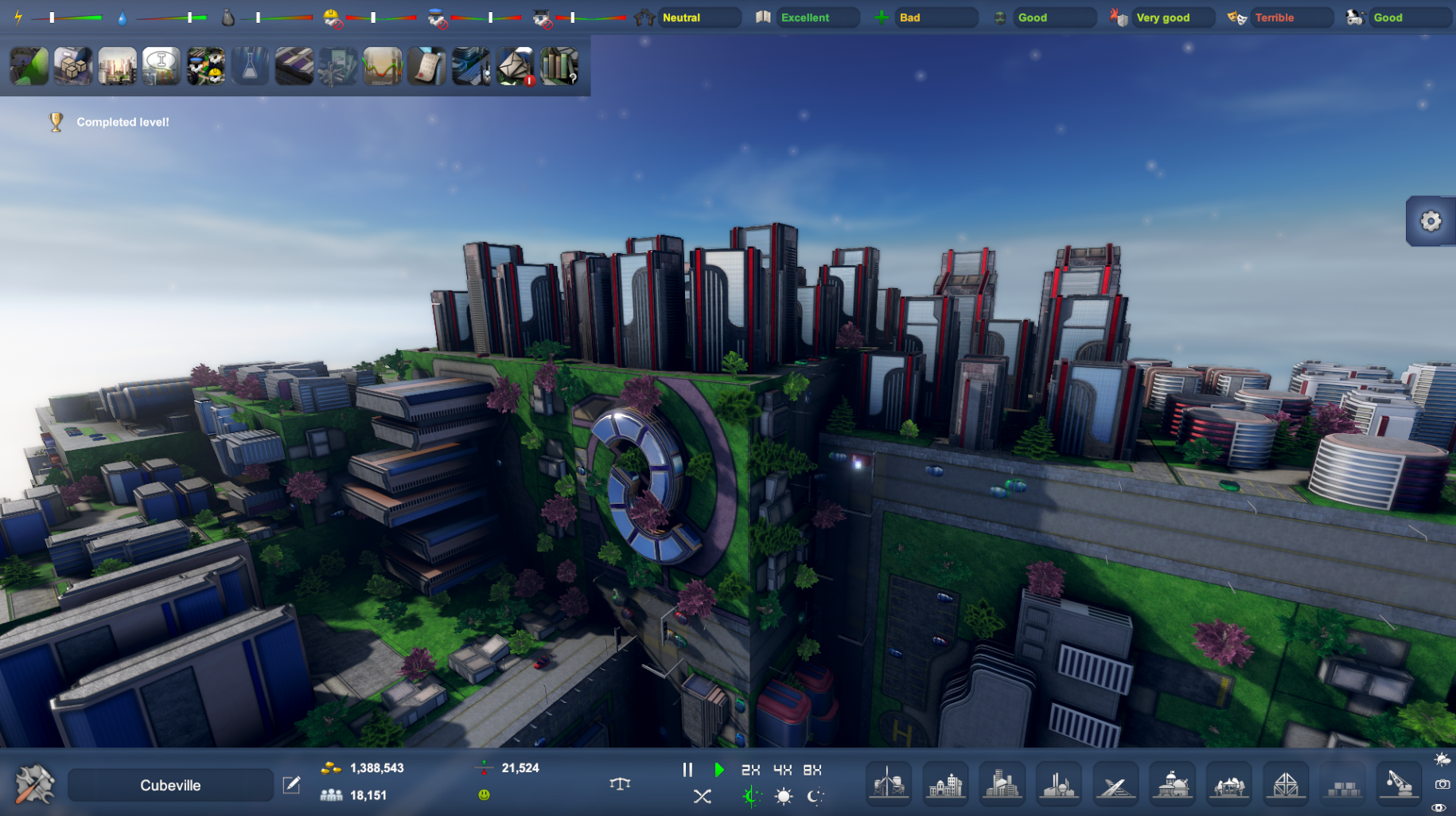 Health was already moved to the local area effects system, but now also takes into concern how much healthcare is "produced" in total, similarly to how education works. Unlike before, you can no longer spam schools and hospitals in one area of the city to cover all health and education needs.

I've now also added culture and entertainment as local area effects. Currently, very few buildings produce entertainment and culture (museum and theatre). In upcoming versions there will be more of these types of buildings added, among them a stadium, a pub and an opera. These kind of buildings will accept the new resources beer and wine that are produced in the brewery and wine maker (suirprise!). These buildings have been added, along with the resources, so although they currently aren't required in the city, you can still produce and trade them. 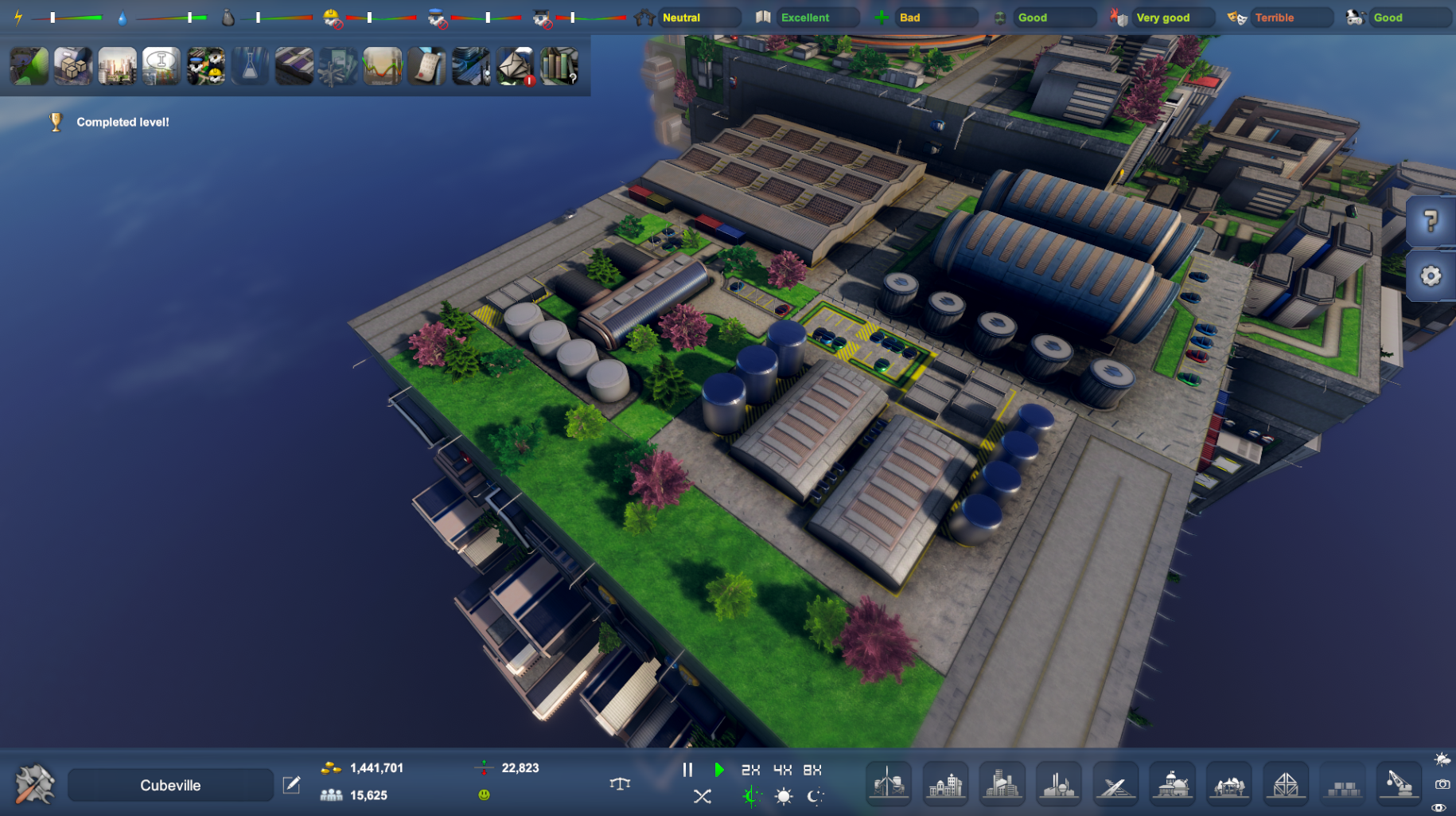 There are also a couple of QoL improvements, among them a button to reset the camera orientation in game, a fix for default controls when starting the game the first time. The cycling buttons for what resource to trade in a long term contract have also been removed. Instead clicking the resource opens a window where you can select what resource to trade. This is more accomodating now that the number of resources has increased and will continue to increase. 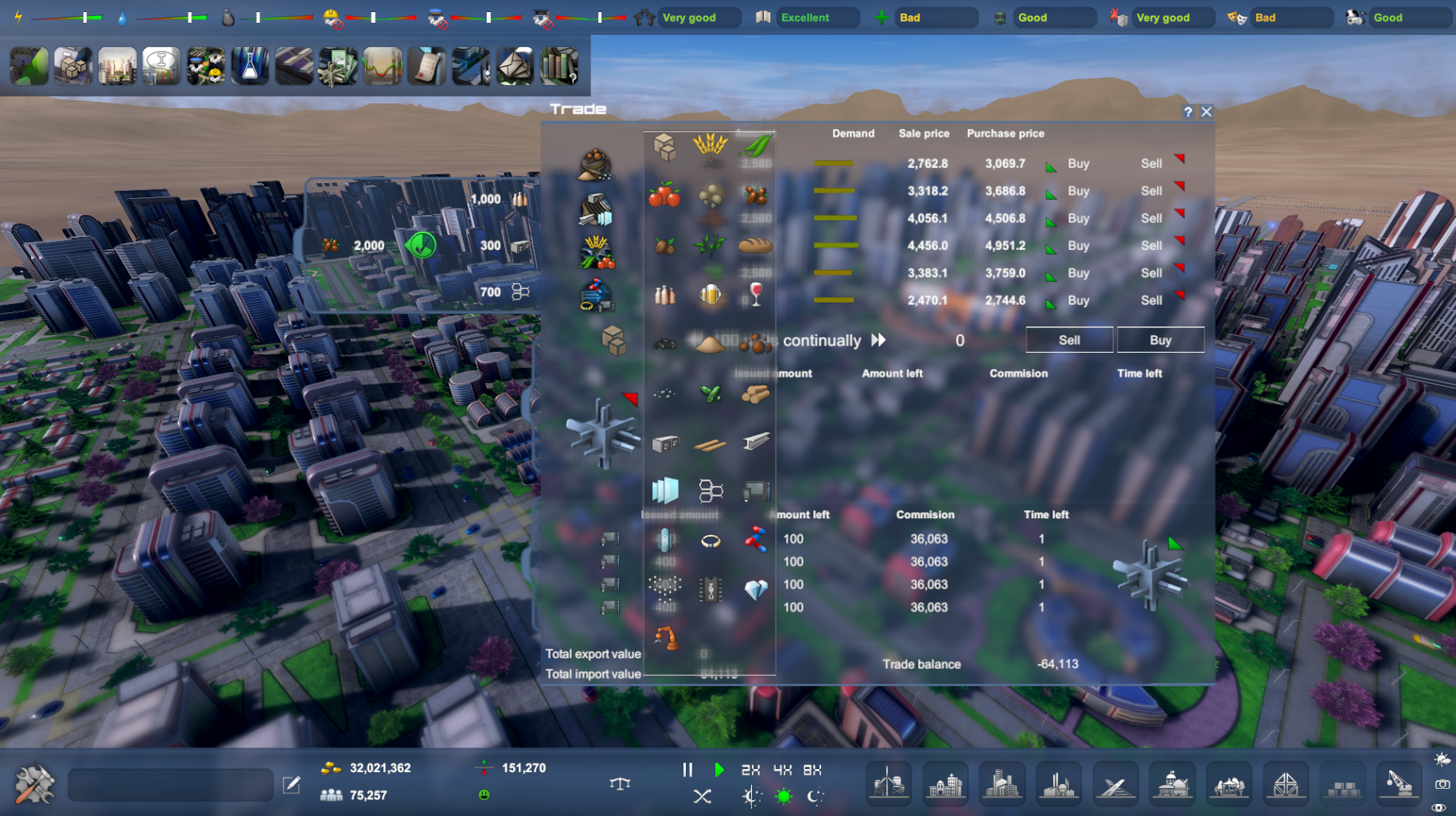 Localisations are finally updated as well! Swedish, French, Spanish and German have all been updated. Russian is underway and there is now also a beta version of polish. More work on localisations and fitting all text elements nicely will be done for the next version. If you find anything that is incorrect, just post in the Discord or in the forum what it is that seems to be mistranslated or mapped incorrectly in game. 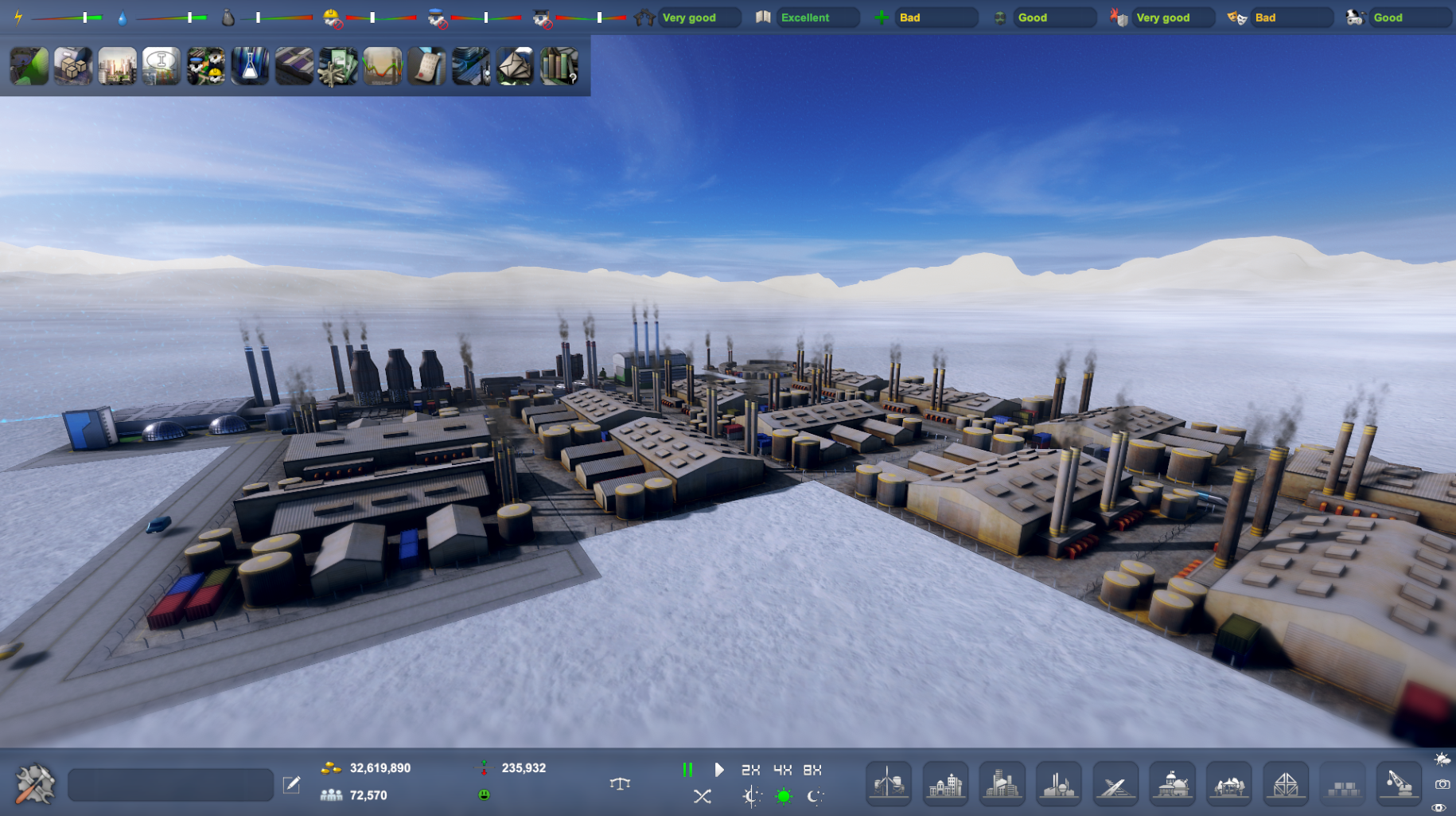 Lastly, the way policy affects commerce and industry has been changed. Before, policies generally affected taxes revenue only. Now they affect the efficiency of industry and commerce, which in turn affects revenue. This makes the effect of a policy more visible to the player. How taxes affect the overall efficiency of an industrial or commercial building has also been changed. Before, regardless of what tier building, they would be affected by an average of the tax levels of all three tiers. Now each tier is only affected by it's respective tax rate. For the second and fourth tier, a mix between low/mid and mid/upper class taxes apply, depending on the density of the building. 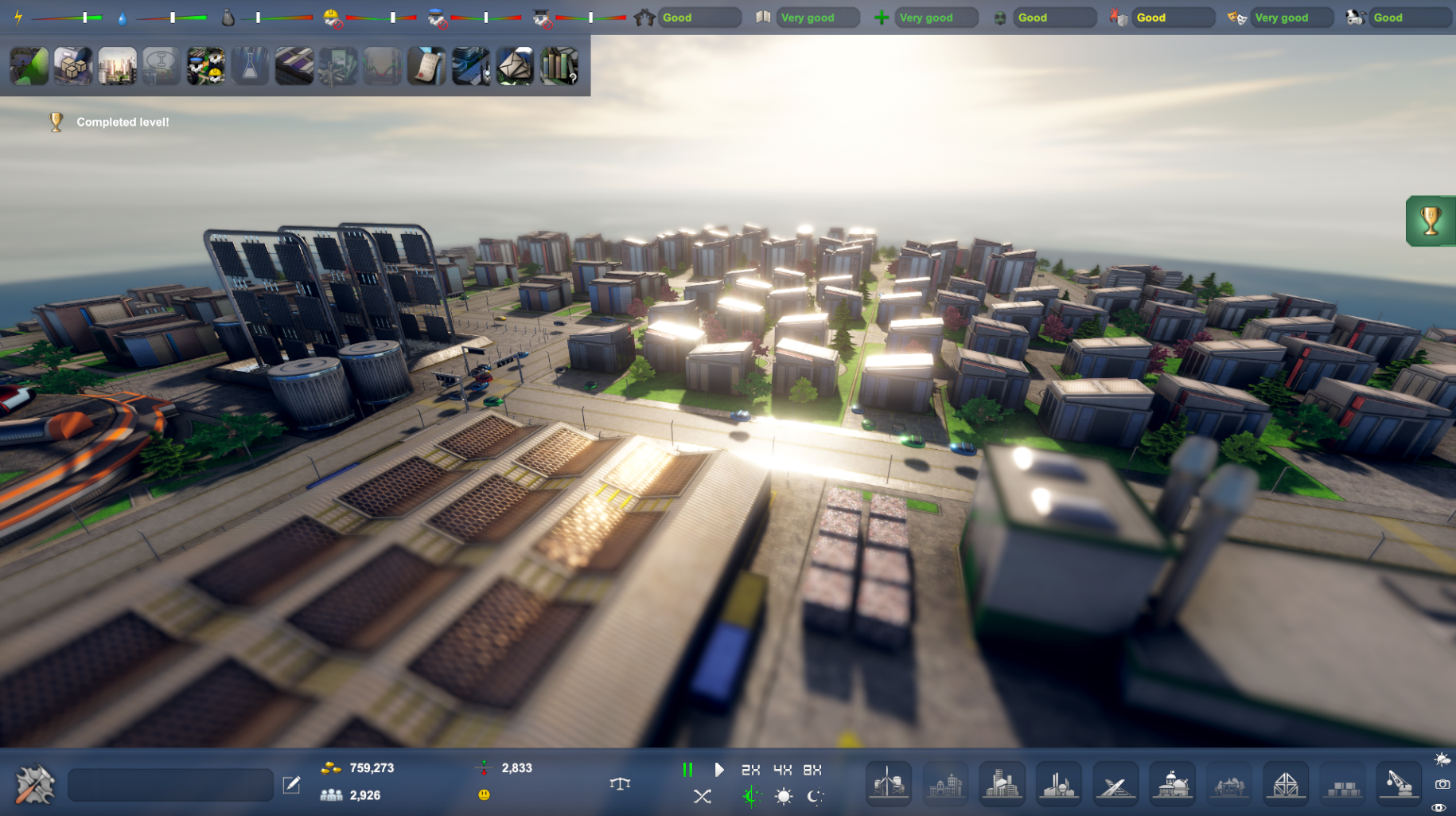