Halloween has come and gone! The pumpkin props have now been put back into storage.

Major features:
- New challenge added.
- Political position map added. This will be expanded upon over time as new policies are added.
- Cocoa, coffee, tea and processed drinks resources added. These cannot currently be grown/manufactured, this will be added in upcoming versions along with adding these into the citizen demands.
- Inflation now implemented. When there is no national bank, inflation will fluctuate more and affect wages more. Once the national bank is built, an inflation targeting mode is automatically applied (other modes will be added in the future) allowing players to set rates to combat inflation and get stable wages. The system will be tweaked over time as more things are added.
- Canals removed from transportation menu. This has not been active since the early alpha. Once the water blocks are implemented, the canals would be out of date anyway.

Minor features:
- Added challenge difficulty indicators in the main menu.
- Input/output chapter of econopedia finished.
- Particle effects turn off when a building is turned off.
- Autorate mode added in bonds and currency panel. This will automatically target 2% inflation. It allows players to not have to micromanage inflation levels.

Balancing:
- Carbon added as starting resource in free roam.
- Carbon added as starting resource in all campaign levels. This was necessary since carbon was made a vital resource for the carbon power plant (otherwise it forces an import of carbon before the city can start growing).
- Financial transactions tax was based on services available AFTER consumption, making it zero if all services were consumed. Now it's based on total services produced.
- Financial transactions tax revenue increased.
- Waste calculation adjusted.
- Tax revenues (res, com, ind) adjusted.
- Wage formation adjusted (this affects residential tax revenue as well).
- Trade yields increased. This is a response to move revenue creation from taxes and promote more trade. Trade commisions also increased.
- Cost of a large set of policies adjusted down. Effects have also been adjusted.

Major bug fixes:
- Fix for research effects not being incorporated in building info.
- Fix for cars behaving oddly.
- Fixed vactrains not showing up when loading a city.
- Added fix for buildings sometimes spamming new connections to roads although they already have one. This improves performance when buildings grow in large cities. There will be more of a performance improvement added to this in the next update.
- Cars now get removed properly when home building is destroyed.
- Fix for trade sometimes not registering.
- Fixed issue with completed challenge levels sometimes writing to number of finished campaign levels.

Other:
- Resource requirement calculation optimized (this runs on a thread so it doesn't make performance better, but prevents issues of values not being calculated in time when the city is large).
- Resource calculation thread made safer. Should now be more stable and not register flickery values.
- SSAA and atmospheric scattering updated. This should improve performance.
- Updated Unity to version 2019.2.

As can be seen, yet again, a lot of time has been spent fixing bugs, improving peformance and adjusting balancing- This is mostly by choice, but also due to a very high work load at the moment. Meaning it has been difficult to find time to properly implement new features. Luckily my current day time job contract is coming to an end, after which my work load will be more normal and I will be able to catch up on items that have been delayed. I still project that I will catch up on the delayed feature additions in december and that the new road map will be live mid to late december.

As for what is in this version specifically:
We see the addition of a food more food resources - cocoa, coffee, tea and processed drinks. These will complement the current cereal, legume, fruit and processed food resources. These will come into play o get buildings to grow to the third or fourth density. Currently the resources are tradable, but not actually used by residents and they cannot be produced. Production facilities will come in the upcoming few versions. Once production facilities are in, the demand trees will be modified so that residents will start demanding the resources. 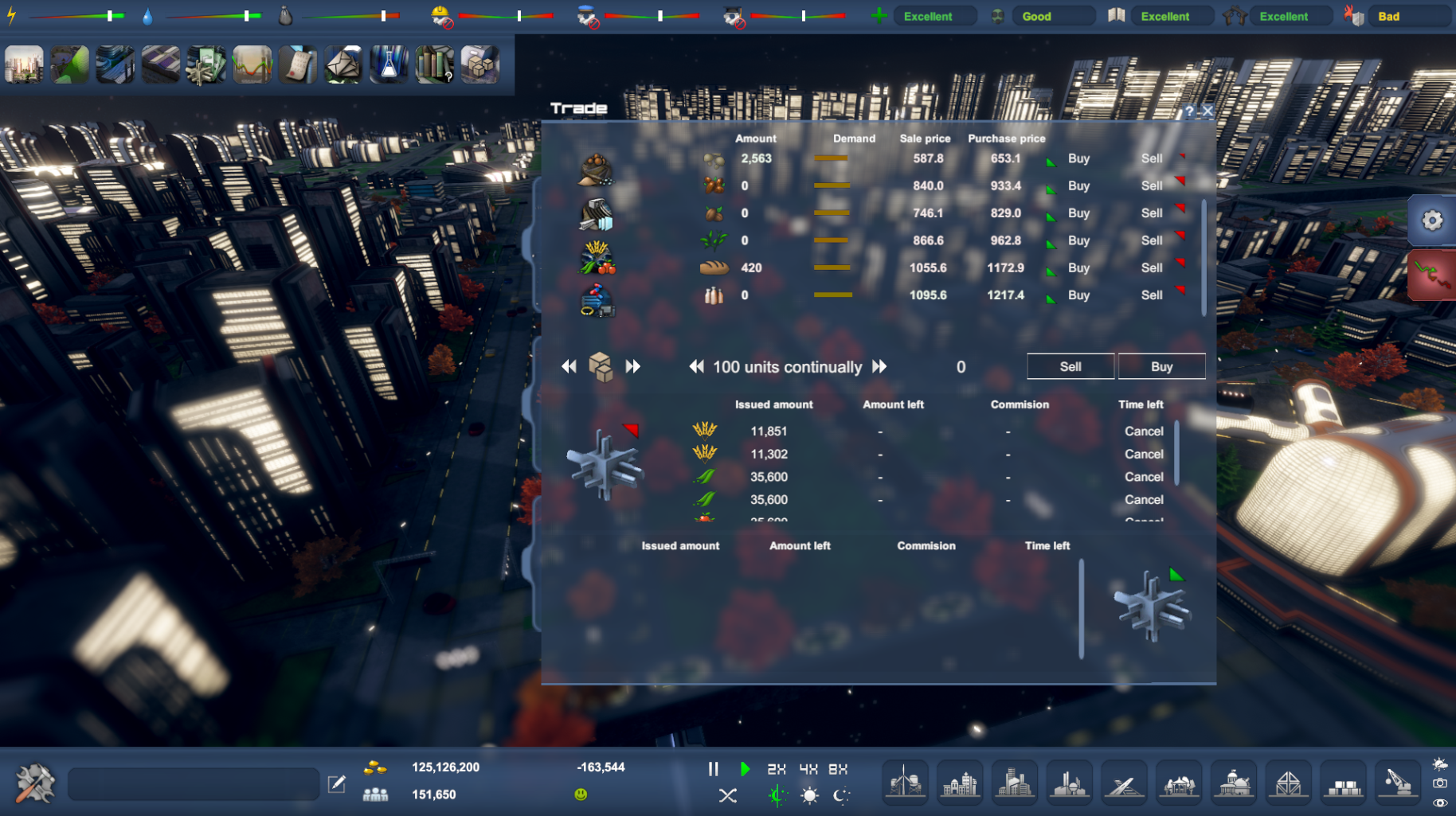 I've also started adding the political position map. This shows players where they are positioned on a gal-tan map according to the policy currently implemented in the city. This takes into account tax levels and policies selected in the policy panel. This will be built upon further and lead up to the implementation of "edge" political cases such as communism and laissez faire capitalism. 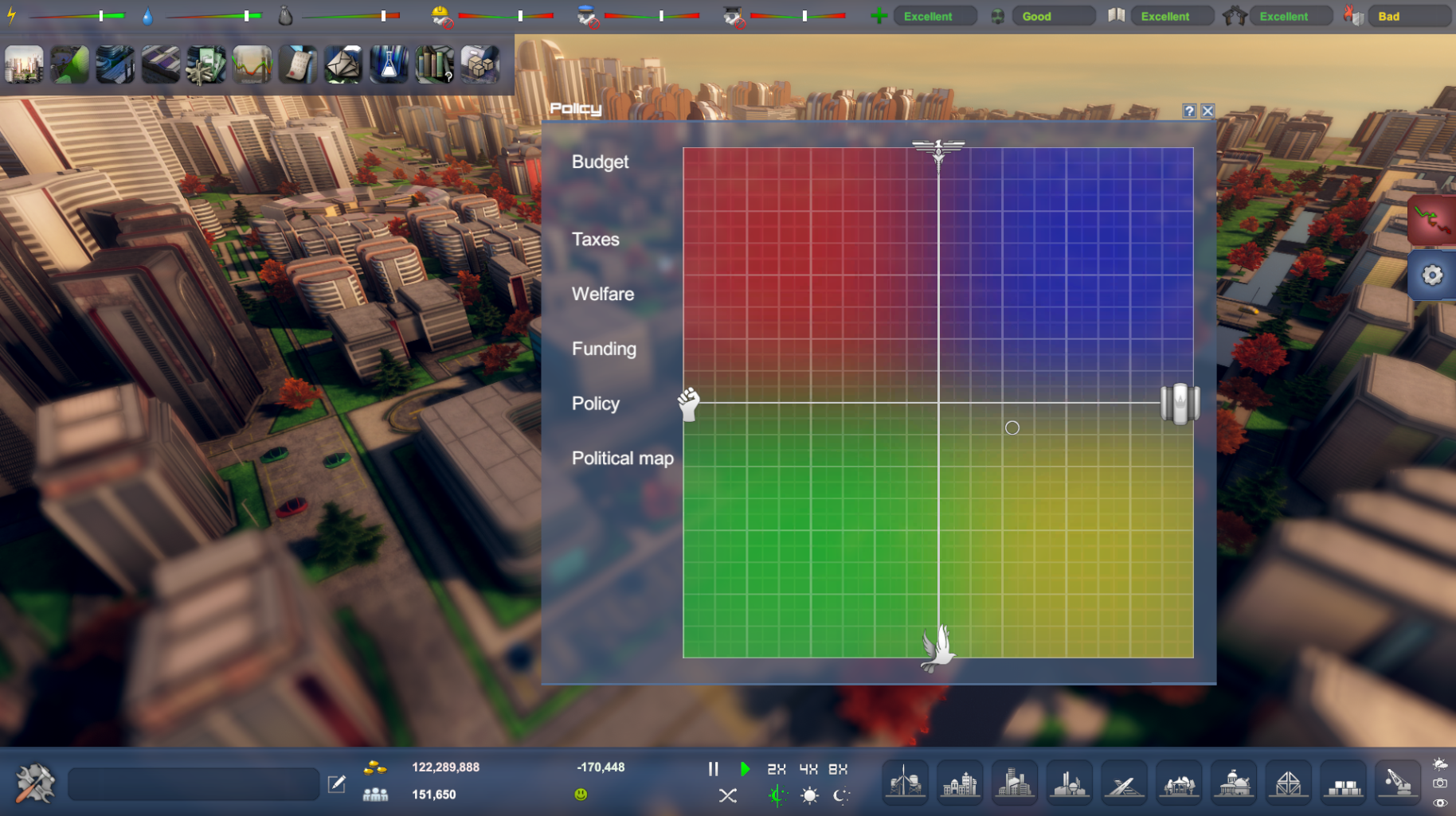 This version features a tonne of adjustments of tax revenue etc. First of all, revenue from residents has been lowered slightly and is now fully relative to wage levels. Wages are affected by inflation, so if you run a city with high inflation, wages will drop in real value, meaning tax revenue drops too. Currently there is no hyper inflation or similar. Instead inflation is clamped to max 15%. Commercial and industrial taxes have been tweaked as well but are not affected by wage levels (except industry and commerce will run at lower efficiency when wages are very high). 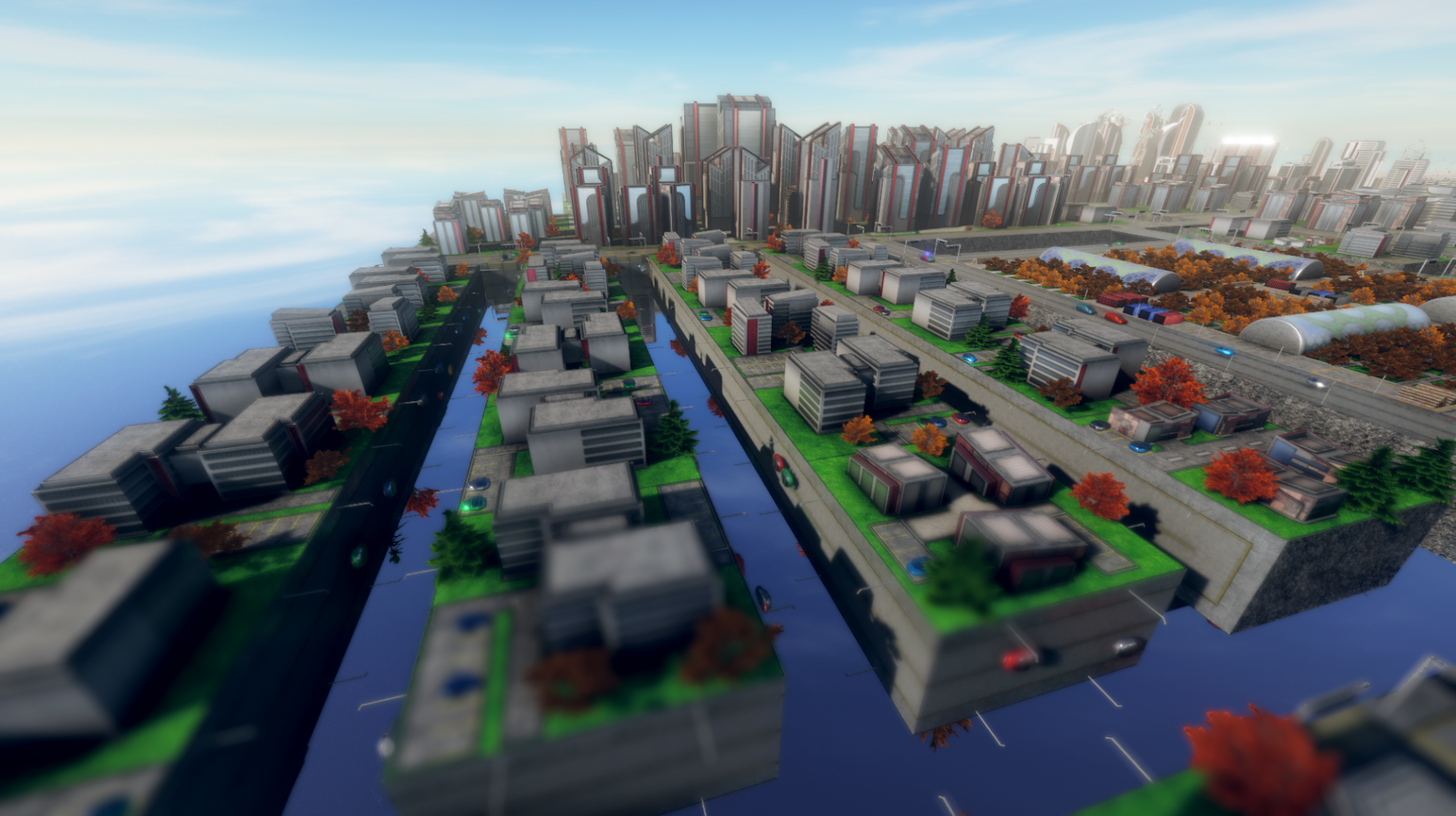 Costs and effects of policy have also been changed. Mainly health and education policies have been changed, lowering costs and increasing their effects.
Financial tax and wealth tax revenue has been increased a bit and trade yields and commision have been increased (by quite a lot). This way trade becomes a more viable method to combat deficits. 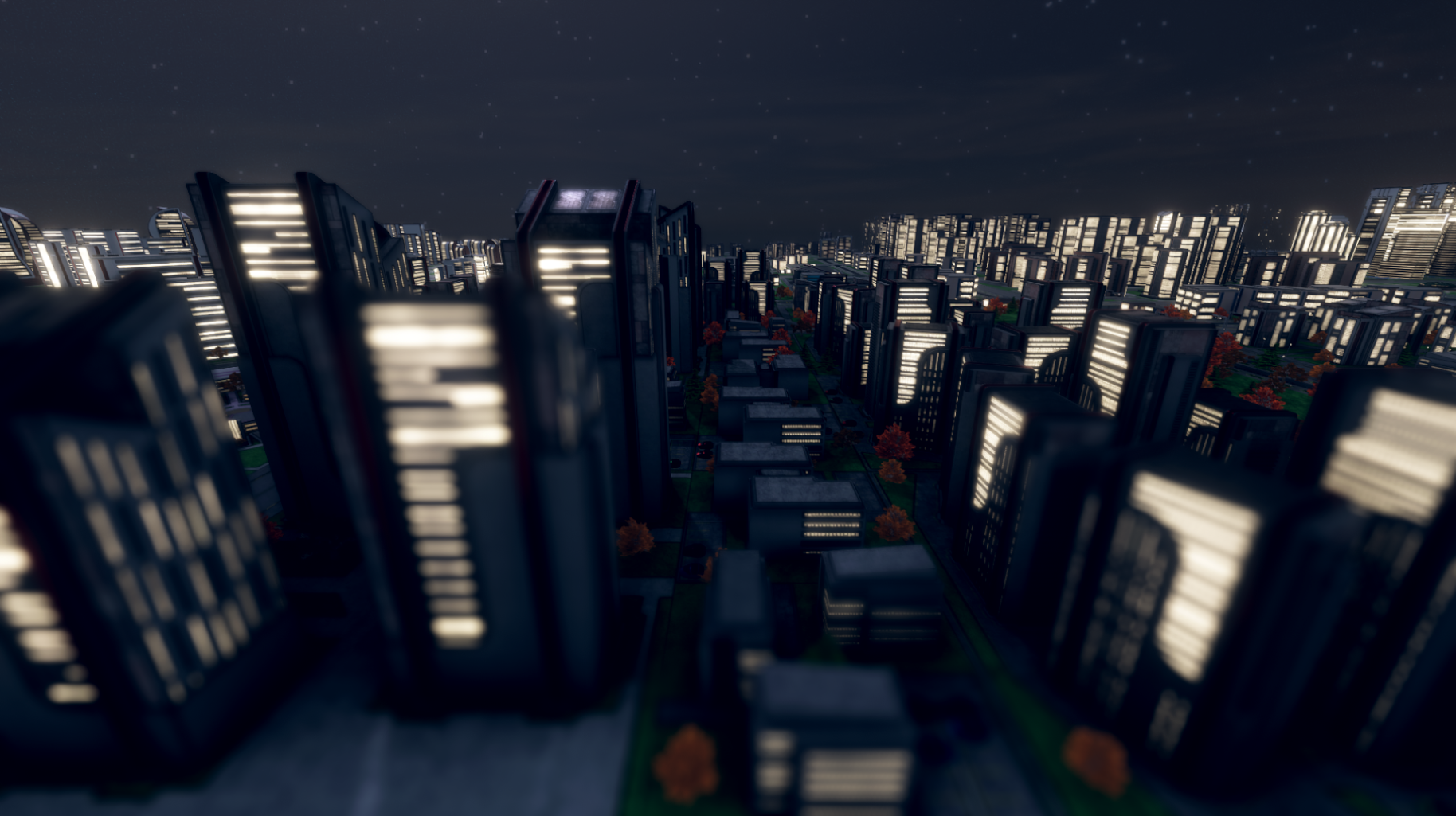 To simplify the early game, carbon has been added as a starting resource on every campaign level and free roam level.
There have also been a fair amount of bug fixes, some major fixes and some minor. A bigger fix is that "flickering" values should now be a thing of the past, since the entire calculation thread has been made more solid. I've also managed to speed this thread up significantly which prevents value update ticks from being stalled when they wait for the thread to complete, which was the case in my current large test city. 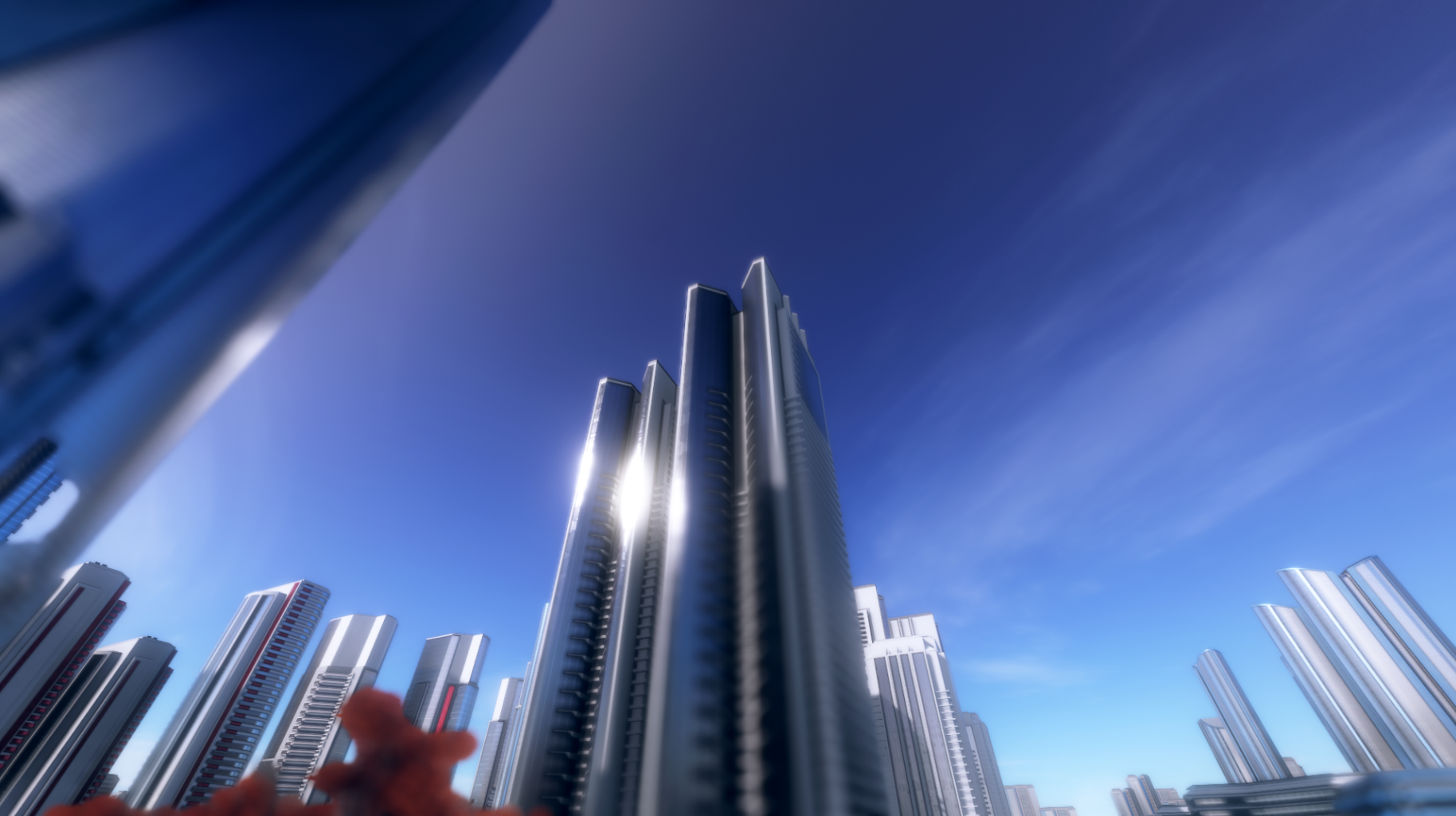