Shows what has been done since the last release. Mostly a lot of small fixes and improvements to the game but also more game content.

So what has been done in this latest version you say? Well let's take a look at the main topics:
- Drops now float towards the ground and does not stick midair.
- Damage numbers now display how much damage you do and receive.
- New enemy (Sentry).
- More visuals when you have gotten a level up.
- Game is a lot less resource hogging. Went down from 40% CPU usage to about 5%.
- Animations! Finally both the main characters and the enemies have animations so the game is a lot more lively. 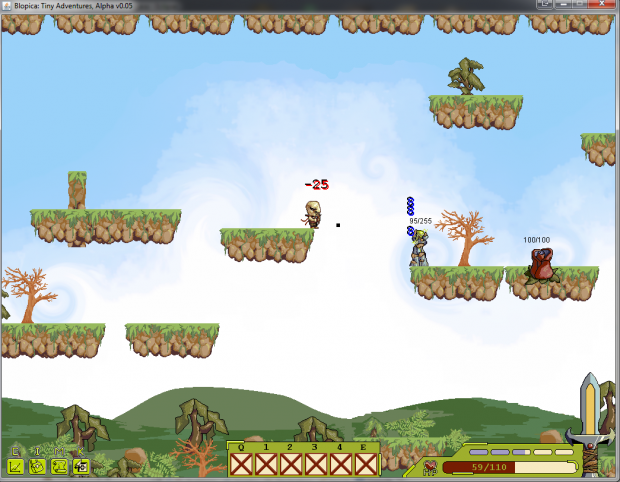 This release also had a large focus on items and implementing new item rarities as well as new item stats. The new stats are:
+Movement Speed
+Healt regeneration
+Stamina regeneration (stamina is used for using Active skills)
+Max Health
All items have a unique look which changes the appearance of the character. The screenshot shows the new "Oriental Armor". Some other new items are a "Baseball Cap", "Feather Bow" and "Winged Boots".

Next up is implementing the melee class and the first skill tier for it. The melee class will use axes, swords and maces instead of ranged weapons.