Solar Flux HD was recently updated on the App Store to v1.02 with a small update which mainly affects the tutorials and some minor gameplay balancing based on player feedback. We thought we'd take a moment to explain those changes a little more closely, and why we made them.

Solar Flux HD was recently updated on the App Store with a small update which mainly affectsthe tutorials and some minor gameplay balancing, based on player feedback. We thought we'd take a moment to explain those changes a little more closely, and why we made them.

Last month (August 2013) we took the game to Dare Protoplay in Dundee, Scotland, as part of the Indie Fest. It gave us a chance to show off Solar Flux amongst fellow indie devs, as well as giving the public a preview of the game before its release the following week. Over the 4 day event, we had hundreds of people stop by our booth which was a broad audience to showcase the game to. We had young children playing, teenagers, developers, parents and grandparents, gamers and non-gamers alike. It was great getting to chat with them and see how they felt about the game, but also just to watch how they played, first hand.

We got a lot of praise for the game (which is always great to get!) especially in terms of the visual quality and the audio in the game. Overall we got a good strong sense that the game was going to be well received, come the release the next week. A lot of players were able to get into the game unassisted and some even played to the end of the first galaxy which was fun to watch. However, we noticed some people struggling at key points.

Prior to Dare, we had already performed a round of focus testing and made a lot of changes to the start of the game, and even the core gameplay. Basic controls were tweaked, tutorials were overhauled and many HUD changes were implemented. However, upon unleashing these changes on a brand new and wider audience, previously unseen issues began to emerge.

So our Lead Designer, Clive, went back and looked over the tutorial levels, looking for ways to make the tutorial levels more intuitive and easy to pick up on the basic controls, but without bringing the player out of the games immersion too far. 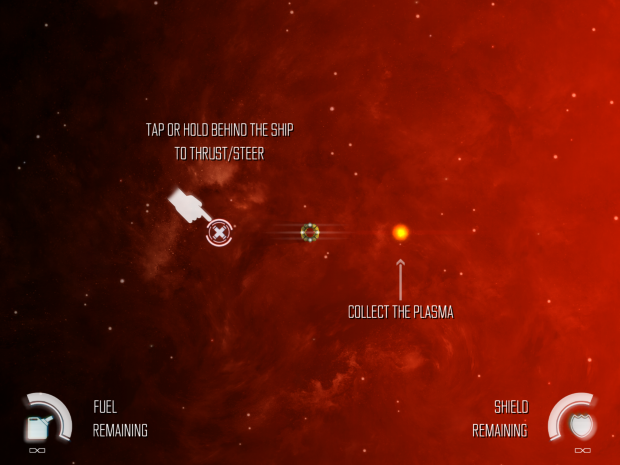 One of the initial hurdles for players was the basic thrust mechanic. Solar Flux is inspired by classic thrust games like Asteroids and Lunar Lander but also newer variants like Osmos. As a result, it seemed very natural to us to tap/hold behind the ship to thrust in the opposite direction. Most people worked it out after a few taps, and got on with it, some others struggled to understand what was happening and had to rewire their brain to work with the ship thrust.

We had actually tried the reverse of the current controls during development and, although there was a split in preference within the team then about which was "best", we went with thrust behind because it doesn't block the players view of where the ship is going, which is quite an important factor on touch devices, and it also adds to the challenge of the game.

Rather than completely rework the core gameplay, we decided to try and make it more obvious for players who weren't used to this sort of challenge. Tutorial 1 now features a finger icon and a touch zone behind this ship. This zone remains on-screen until the player displays aptitude at this task. We also use this in tutorial 2 to show that blast-off requires similar thinking. 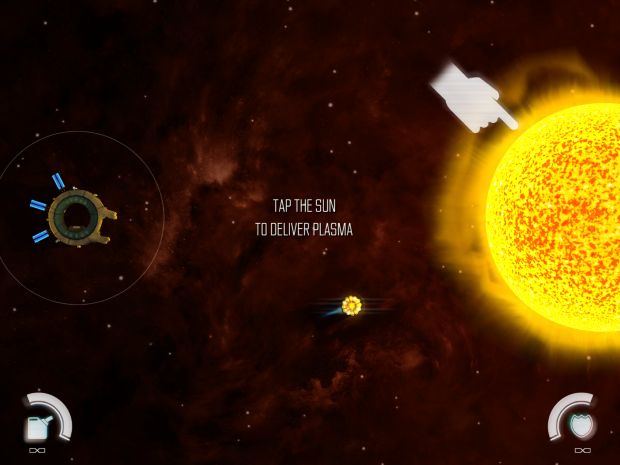 Children as young as 2-3 where playing the game (better than some of the adults! :D ), but without being able to read the tutorial text, they needed a hand with how to play, but once they got that down, they were off and could handle the rest of the game without further tutelage; we needed it to be more visually obvious. Additionally, it became clear to us that messages we thought were totally obvious were in fact completely arbitrary when exposed to a new set of players.

In tutorial 3, the message ‘Touch the Sun to Deliver Plasma' appeared after the player had
collected 5 pieces of plasma. Because we used the word ‘Touch' in earlier tutorials, we presumed most players would be OK with this by now. However, we observed about 40% of players would attempt to fly directly into the sun, rather than touch the surface of the sun with their finger. As a result, some of the tutorial text was changed to be clearer (the word "tap" appears to be concreted in touch device culture now!), and a new icon consisting of a pointing finger/hand was added which follows target locations where the player should "tap".
We also freeze the action completely now at the required point of delivery, and don't let the player proceed until they tapped the sun with their finger. This cleared up the added confusion seen in tutorial 4 when some people were unsure how to deliver plasma, mid-orbit, without using fuel. 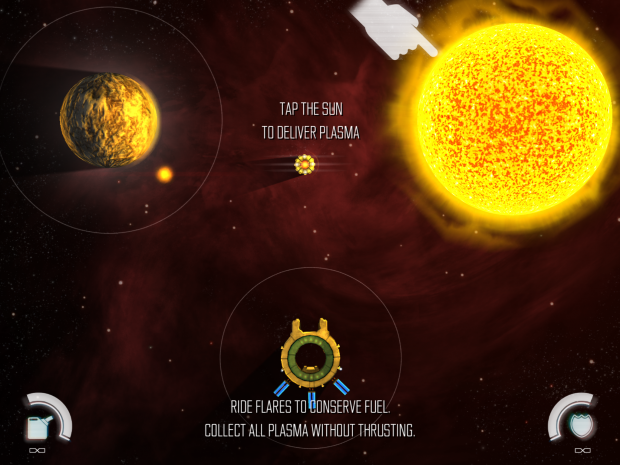 Most people managed to get past tutorial 5 (solar surfing) after a few attempts but the benefit of the changes made elsewhere meant we were able to quickly improve this tutorial also. We now freeze the action when the first piece of plasma is collected and force the player to touch the sun so they can see the effect of the flare pushing their ship in action.

So the v1.02 update is basically our reaction to the feedback we've received on the game so far, but we're not done with it yet! We're still looking at ways to improve the game further on iPad (and beyond...), so any further feedback we get will still be collected and taken onboard.