This update we’ve fixed a plethora of bugs while at the same time, introduced a wide array of upgrades, both in terms of capability as well as performance. UI, Particles, Materials, Audio and Waypoints are just some of the systems which have received incredible and much needed upgrades!

Last update brought about a large overhaul to the rendering architecture of the engine, and with it came a lot of bugs. This update we’ve fixed a plethora of bugs while at the same time, introduced a wide array of upgrades, both in terms of capability as well as performance. UI, Particles, Materials, Audio and Waypoints are just some of the systems which have received incredible and much needed upgrades!

Last update the structural reconfiguration of the rendering architecture brought about massive improvements in rendering speeds and yet despite this, Bright Engine still felt clunky. While we focused all our attention on the viewport we forgot to address the User Interface which over time has become loaded with new settings and editors which were tacked on in a “bolt-on” fashion. The result is that the UI became slow and messy with inconsistent layouts, slow object selection, and some nasty visual artefacts (especially when scrolling).

We spent over half of this update development time focused on a complete overhaul of the user interface code for the World Editor, Particle Editor and Material Editor to resolve all these issues. 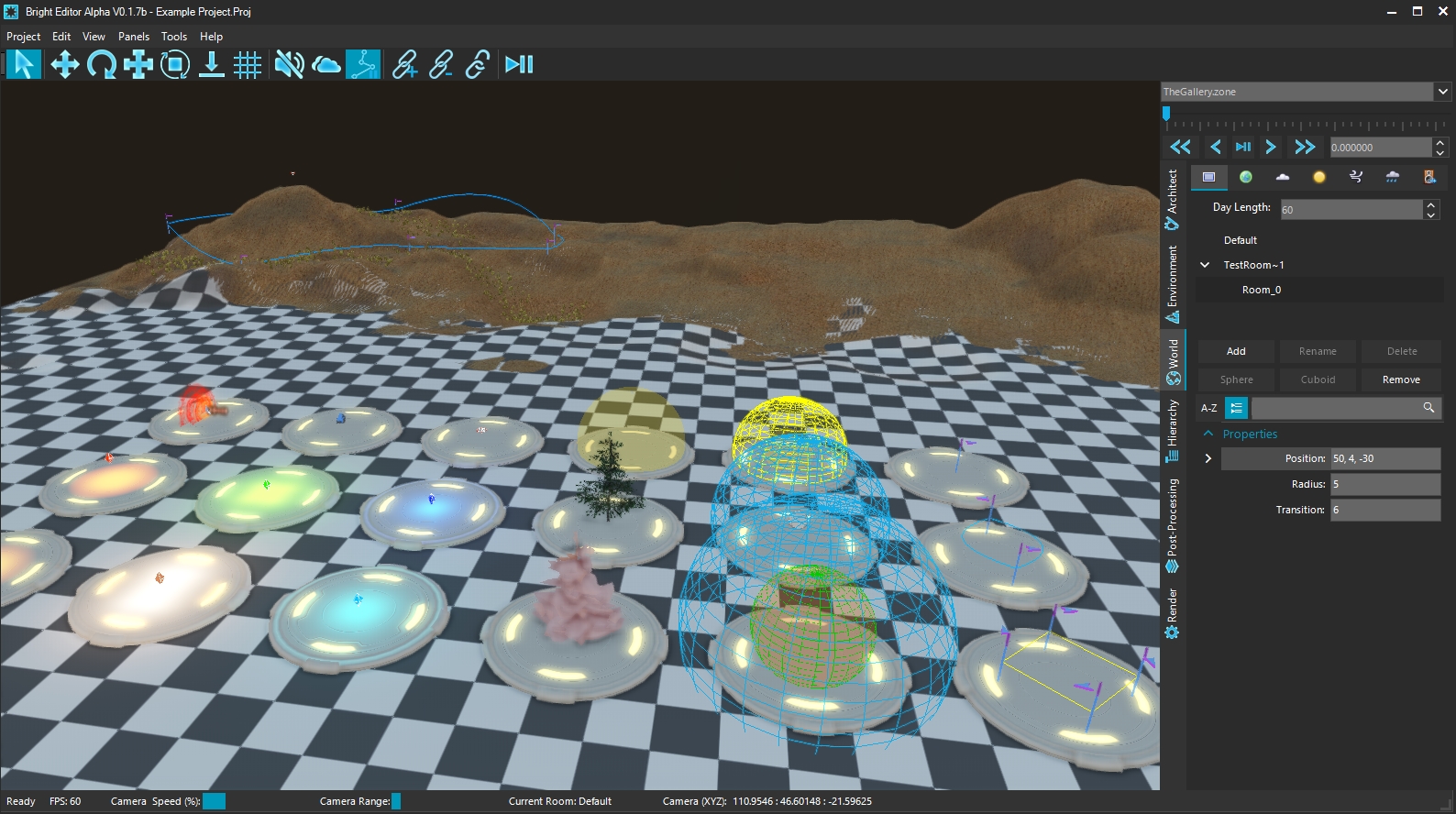 We have completely re-written almost all of the UI code for the world editor, which originally was poorly designed and badly implemented. Naturally this took quite a while and was frankly very tedious work but the results are more than what we could have hoped for. Over 9000 lines of UI code was wiped from existence without removing any functionality, along with a noticeable drop in CPU strain furthering the mission of keeping Bright Engine “lightweight”. 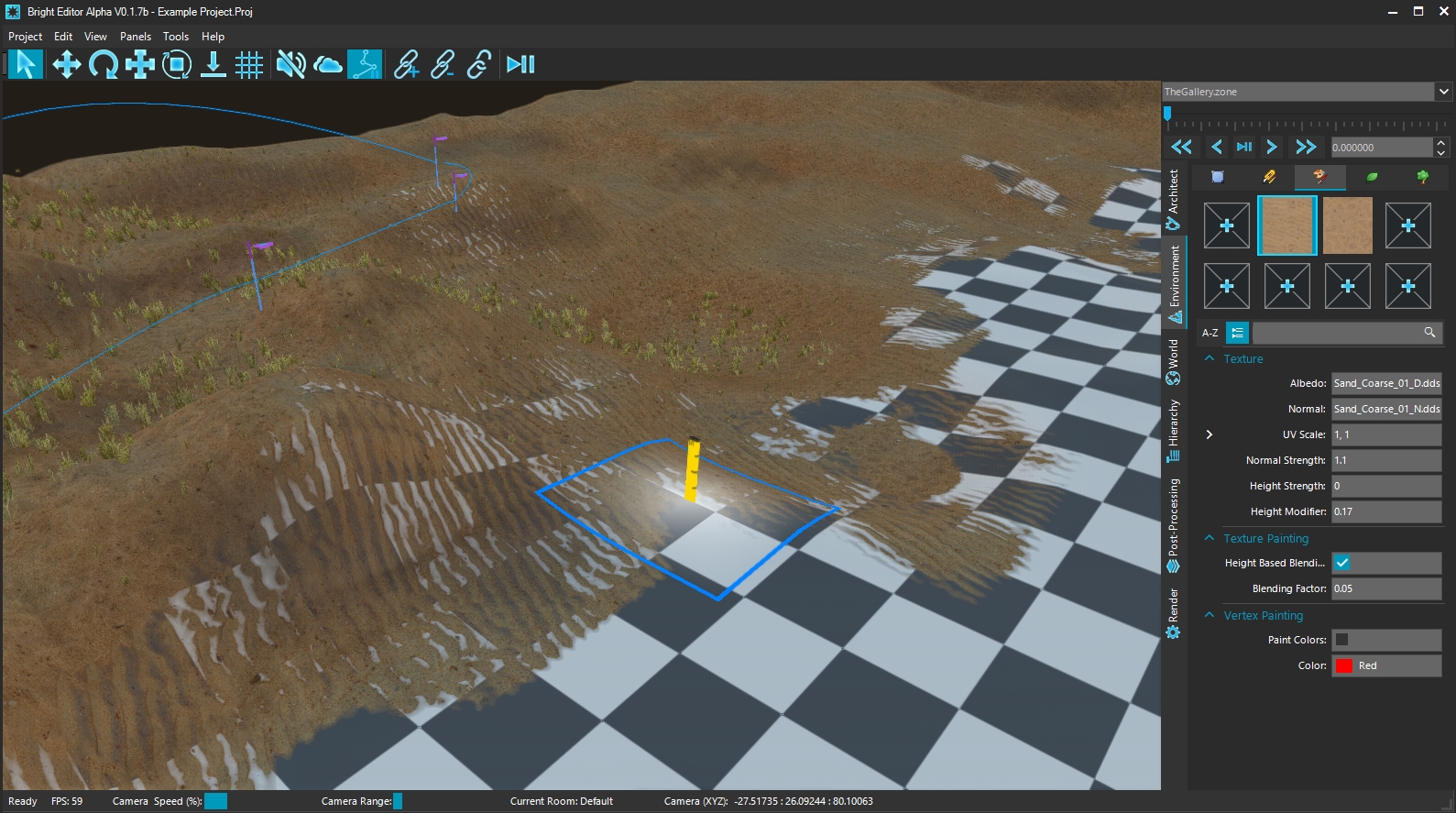 Selecting objects and switching tabs is now instant, with no delay or pause like before. Users of v0.1.7a will know the horror of having to wait almost 10 seconds to switch to the World Tab, well not anymore!

We also redesigned the layout and created a new custom control that innovates the development process by allowing you to simply search for the setting you are looking for, rather than have to scroll down a long list.

As part of the new design, settings are no longer shown in one long scrollable panel, but rather have been broken down into tabs making it significantly easier to find what you are searching for (as well as faster). With the exception of a few properties, scrolling through settings is now completely non-existent

Existing users of the engine, will notice some notable differences in the UI of the Particle Editor. Much like the World Editor, it has received a complete overhaul of its UI code along with improved functionality. 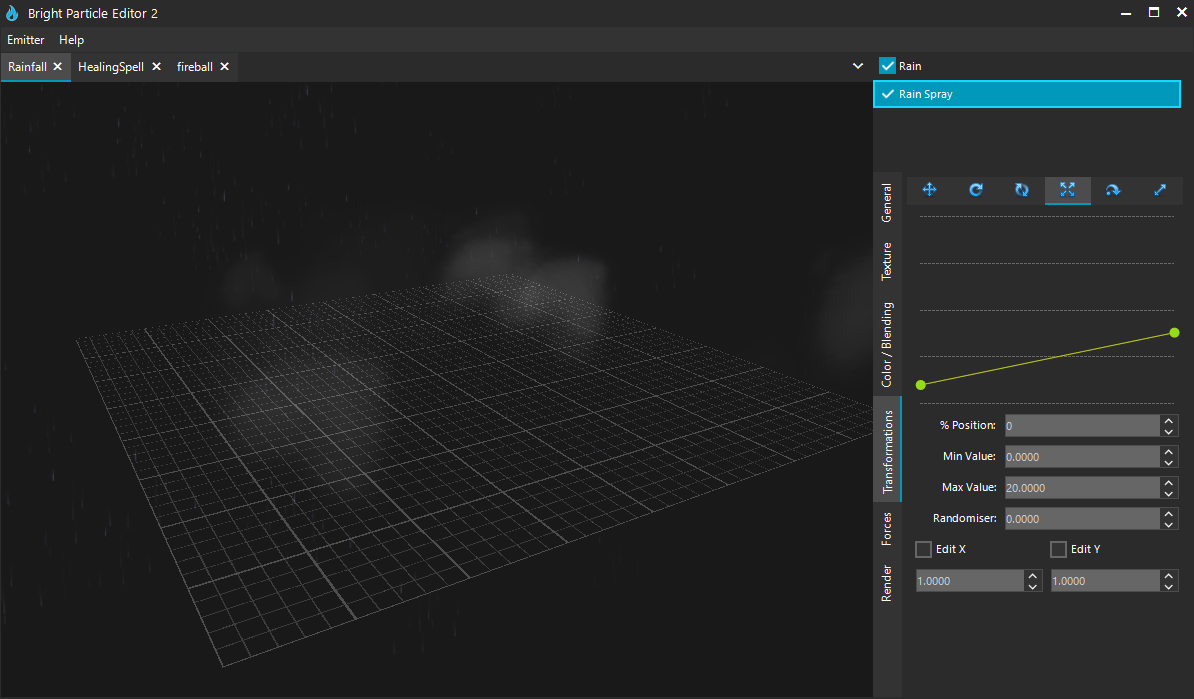 Firstly let's talk about the new saving system. Particles are now saved into their own independent files (like the Material Editor does) rather than one massive database file, giving users more control in terms of project structure, but also saved us from having to deal with a system which had a habit of creating a lot of headaches. The main advantage to this of course, is now you can have multiple particle systems open at once and simply switch between them!

You’ll also notice that, just like the World Editor, all the settings have been organised into Tabs for a much faster and streamlined editing experience

The Material Editor also got a similar beauty treatment with multiple materials being editable at the same time!

Needless to say, we are very happy with the transformation of the Editor’s UI and can’t wait to hear your feedback!

Lets take a step away from UI and start getting into the details of the system upgrades! In reverse order:

The material editor has had small but exciting changes. Most notably the introduction of Comment Boxes! 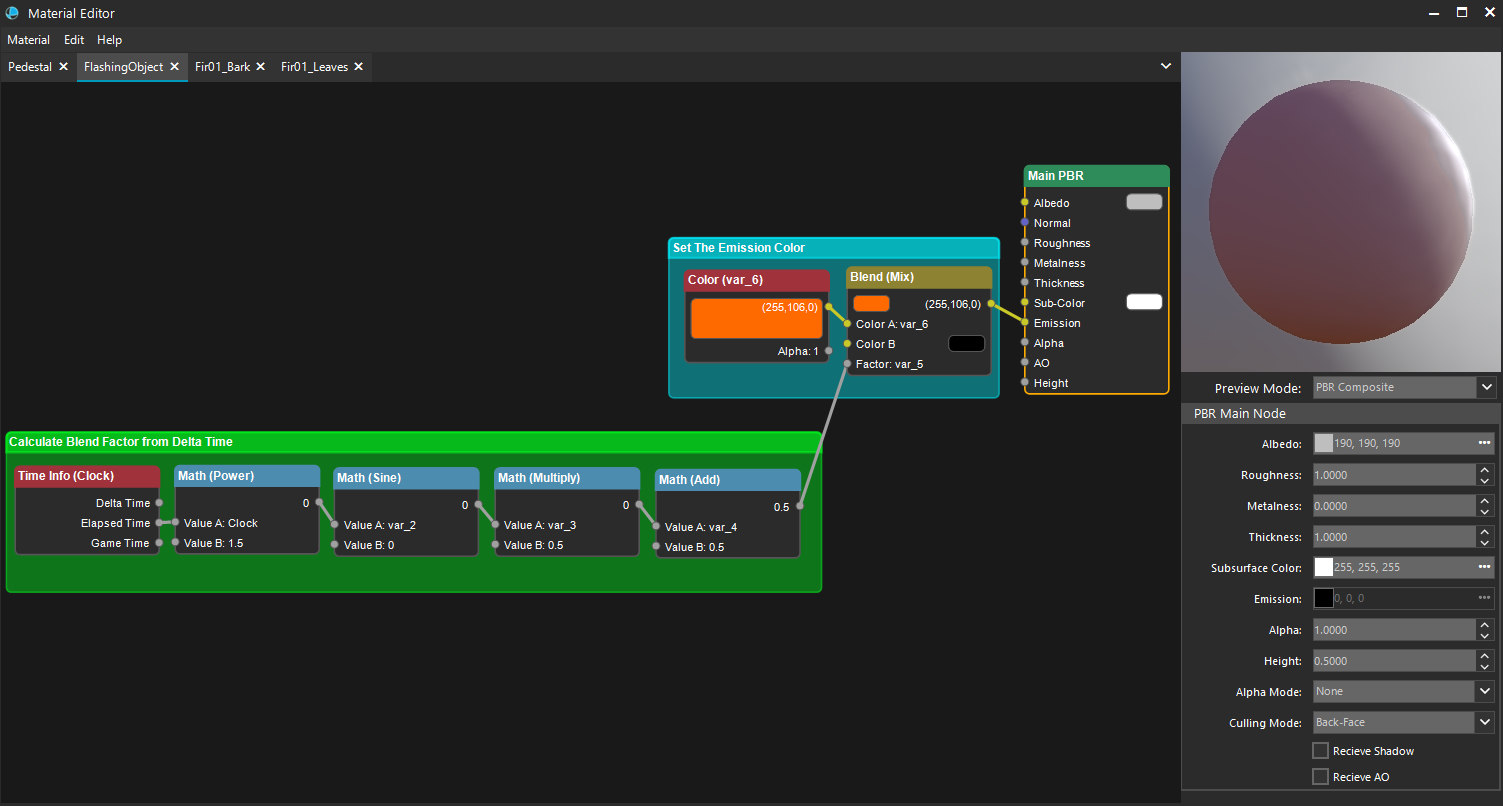 Another exciting addition is a brand new node: Time Info Node! This node grants you access to all the relevant time information in your game including the delta time between frames, the elapsed game time, and of course the in-game time. 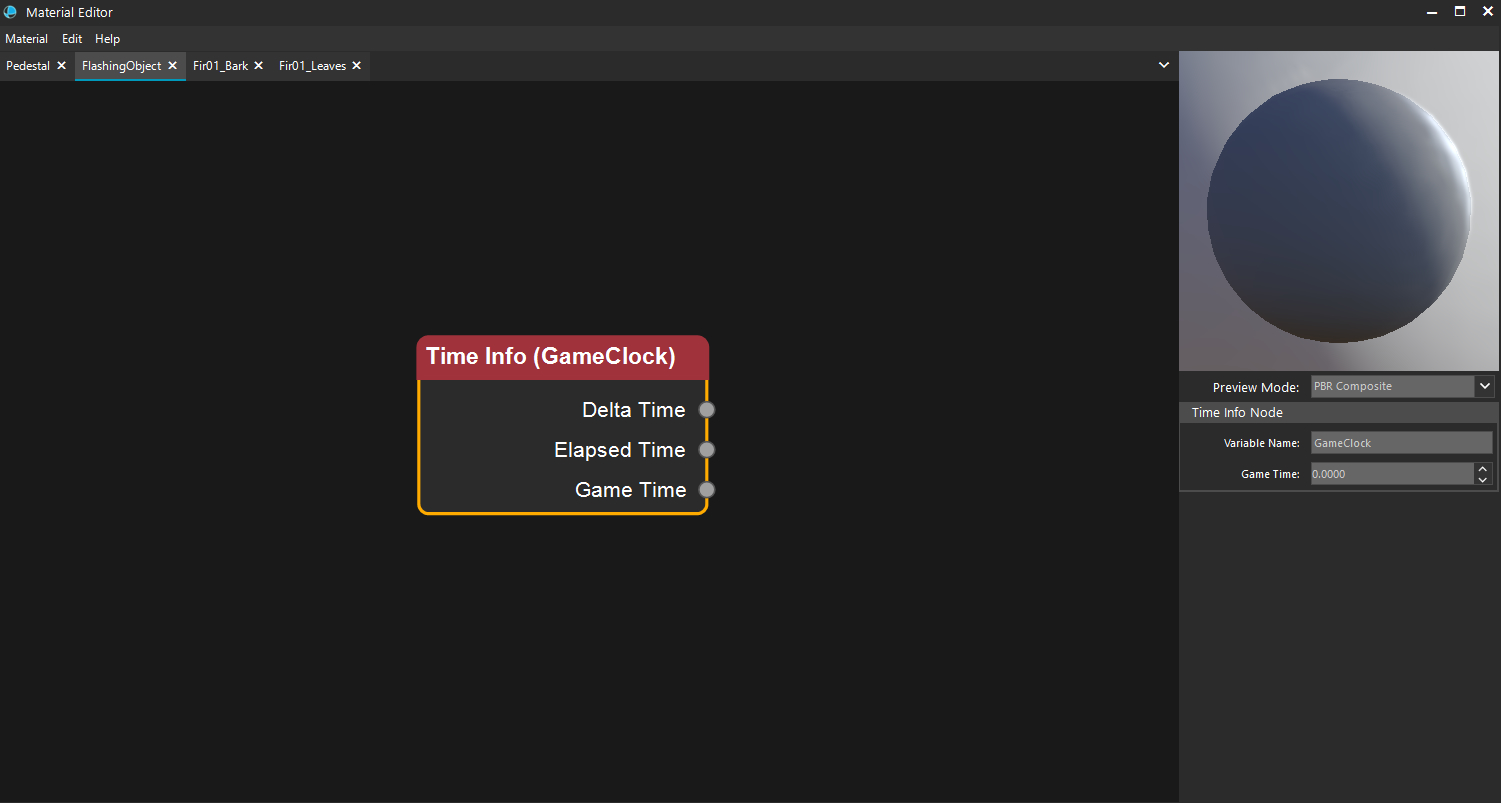 With this new addition to the node family you can create effects such as a flashing surface or have lights inside a house turn on at night! 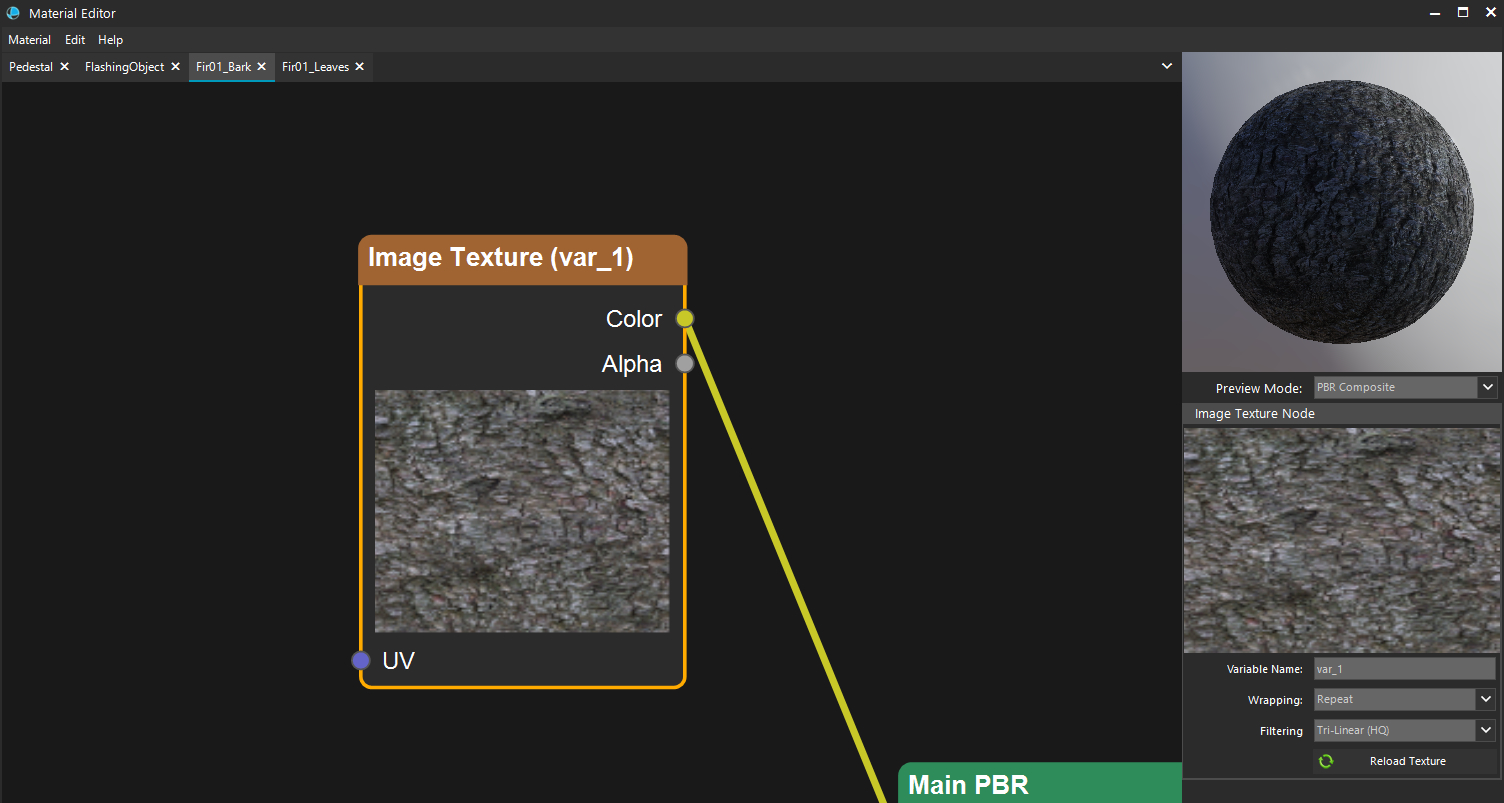 Continuing in reverse fashion, the Particle editor has also had some fancy new features for even better diversity of effects. There are three new settings which have brought about an entirely new plane (quite literally) of effect possibilities.

The culmination of these new settings allowed for the creation of this rather snazzy effect within less than 5 minutes!

Under the hood of the Particle Editor, even more work has been done, specifically the introduction of multi-threading for even faster loading times as well as some behind the scenes magic. But more importantly, the groundwork for 3D Mesh Particles has also been laid and so, they too will make an appearance into the Engine in the near future.

Continuing on with Particles, the Weather system is once again functional and working nicely!

On a different topic, some rather important improvements were made to the model importing system which up until now, had been the primary source of annoyance for testers. So the following upgrades have been made which should put these nuisances to bed: 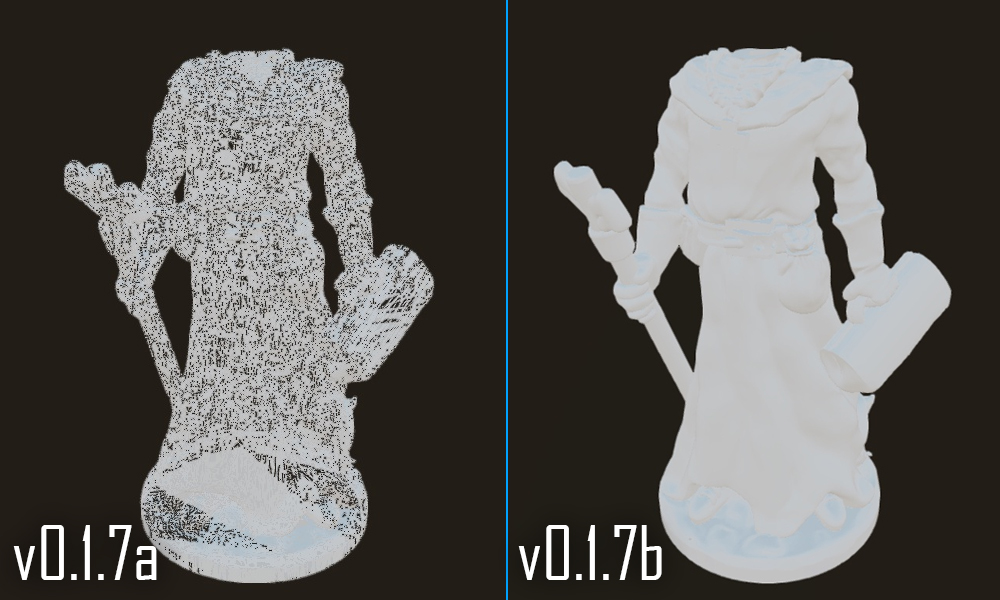 Now as glorious as these improvements are, their sole purpose is to clean up any mistakes made by lazy 3D modellers who ran out of coffee, and do take up additional loading time. While the increase in loading time is minor, large projects may see it start to add up. The good news is Bright Engine is smart and so will only perform these intensive solutions only when it needs to. Therefore if you want to maintain your old healthy fast loading times, ensure all models are exported correctly!

Audio was introduced back in v0.1.6b last October and only really had a handful of settings at your disposal. Volume, panning and playback speed was about it. We had enough of its bland nature, and now the time has come for more atmospheric effects! 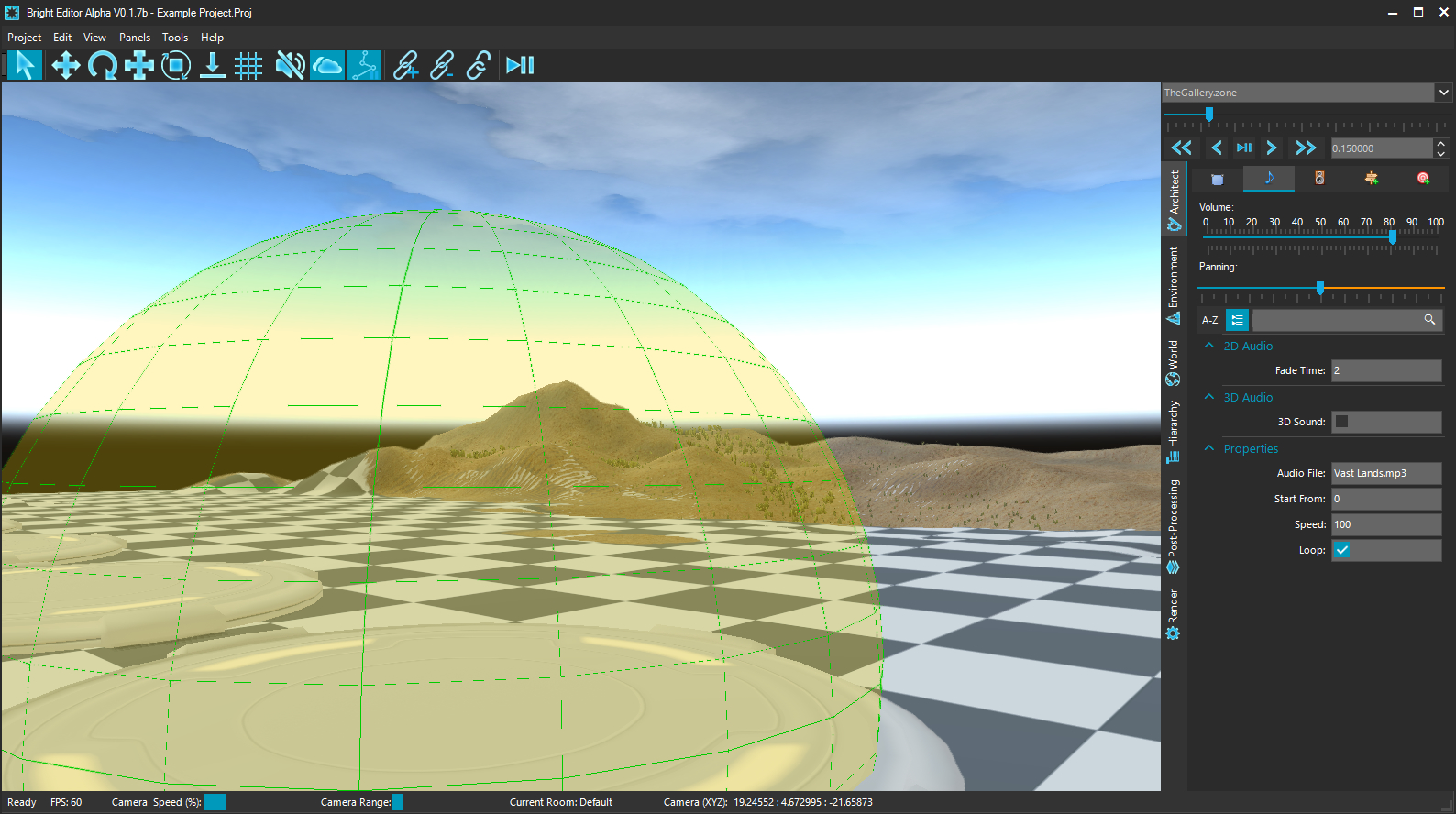 We’ve added a entire suite of audio post processing effects to bring your world to life with over 60 new settings to control effects such as: 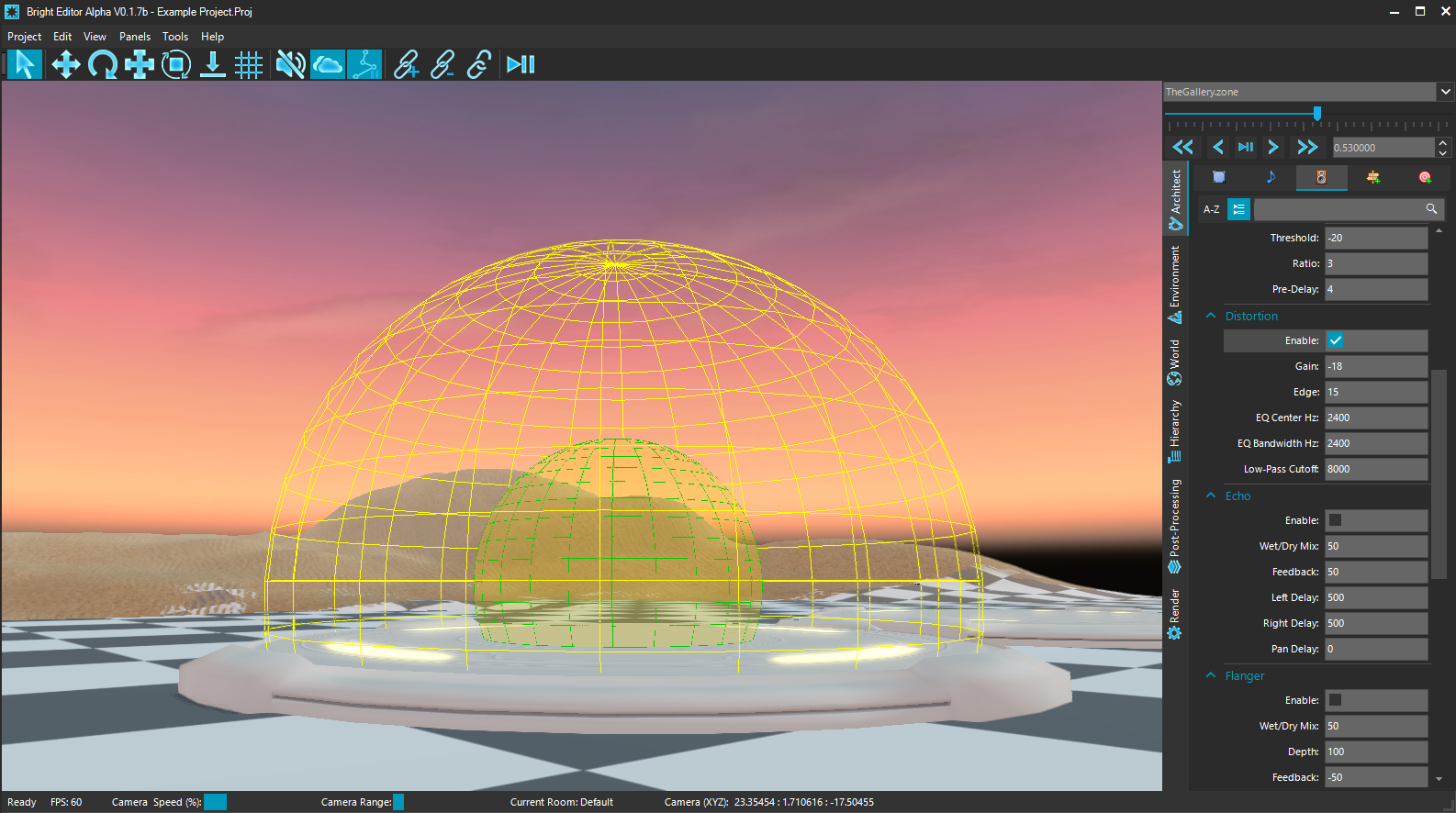 But instead of doing a flat implementation, we’ve added override settings to the Room System. These will always take priority when calculating post processing for audio. An example of their use could be, a player enters into a cave, and now the override kicks in which adds an echo to all the footstep sounds. 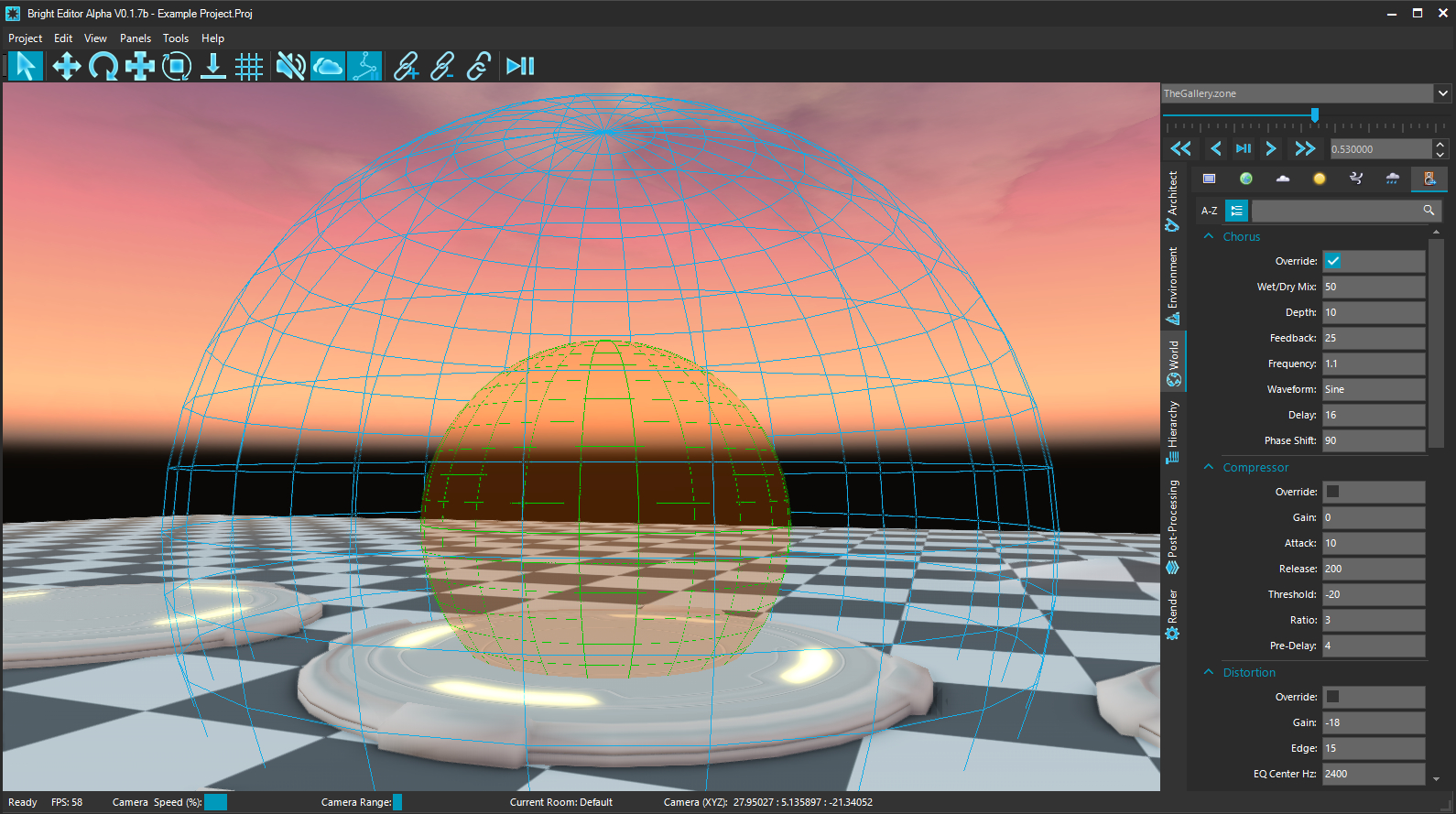 We also took the liberty of adding a global mute button in the primary toolbar as requested by the community!

The last improvement we made this update was in regards to Waypoints. After some feedback, users were getting annoyed that they had to place their waypoints first and then create the path afterwards. It worked, but it was unnecessary to create that extra step. As a result we’ve addressed the problem by letting you do both at the same time! By holding down the Shift Key while placing waypoints, you’ll also create a path which you can modify afterwards

This update was focused primarily on fixing the UI as well as the vast collection of bugs that have existed for far too long. And while it’s nice to celebrate the progress we’ve made, there is simply far more to go! In the next update we will once again be turning out heads back towards rendering to fix the last of the visual bugs introduced with the new architecture, fixing shadows, AO and Subsurface scattering. Furthermore a deeper dive into the mathematics of our lighting calculations will be taken, in an attempt to improve quality as well as performance, amongst other areas of interest. Another goal for v0.1.7c is laying all the groundwork for scripting, as we approach the next series of updates!