Usurper is a classic Metroidvania styled Action RPG. Set in London and filled with Lovecraftian Eldritch horrors. Usurper is developed by Steve Gal and published by Pugware.

Posted by SipReadRepeat on Nov 7th, 2019

Hi! We're Sip Read Repeat we write stories (reviews mostly) about Indie Games whilst under the influence of coffee. We're more relaxed than your ordinary Indie Game Blog and ofcourse are articles are supposed to be drunk whilst reading coffee.

You'll get more bean star points if you read it on the site: Sipreadrepeat.com

Usurper is a classic Metroidvania styled Action RPG. Set in London and filled with Lovecraftian Eldritch horrors. Usurper is developed by Steve Gal and published by Pugware. 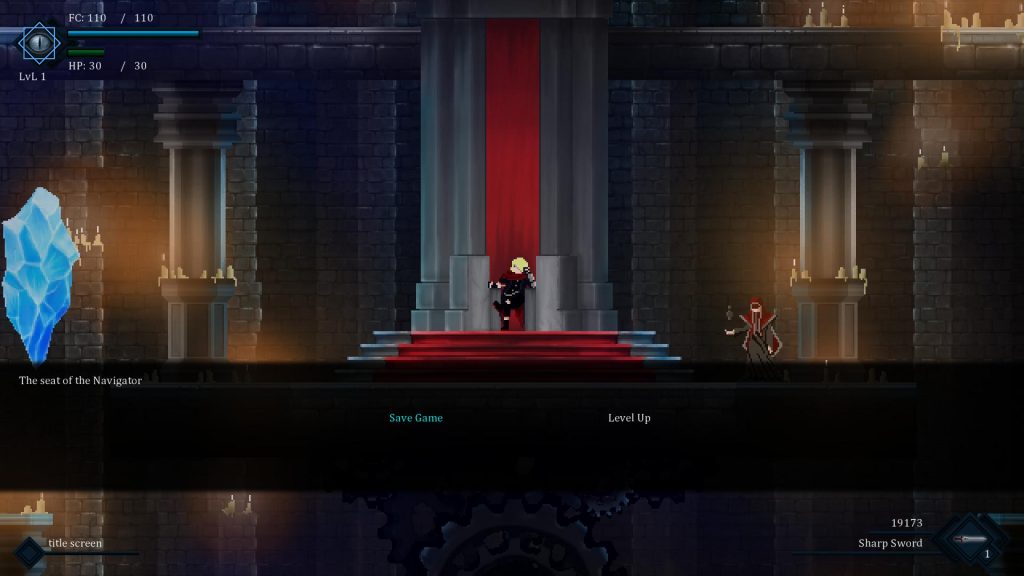 You heal and save on the throne. Usurper is literally a Game of Thrones.

While technically a sequel to the game Shrouded In Sanity, Usurper is also a standalone title. What that means is that you can glean enough of the story so if you have not played the first one it doesn’t matter too much.

A massive structure known as The Citadel has invaded London and is flooding the streets with a maddening fog and plenty of Eldritch horrors. The Empress has readied her knights to repel the dark forces, led by the misshapen beast known as The Navigator. Among the recently re-crowned Empress Eleanor’s forces are her most loyal knights known as The Four.

The game opens with another misshapen creature being thrown into a pit of corpses. We find out that this cursed form belongs to a being known as Waltham who was disfigured in combat with The Navigator. Waltham then finds and reanimates a corpse to use as a vessel, which belongs to one of The Four Knights mentioned before. This sequence is highly reminiscent of the opening of the game Dead Cells, however, Usurper is much more dialogue-driven in its approach.

Once Waltham reanimates the corpse both the mind and body are brought back with Waltham existing inside the body as a parasite. This creates a symbiotic relationship between the corpse knight and the magical parasite that allows them to use a sort of time manipulation on their journey through the citadel to take down The Navigator. 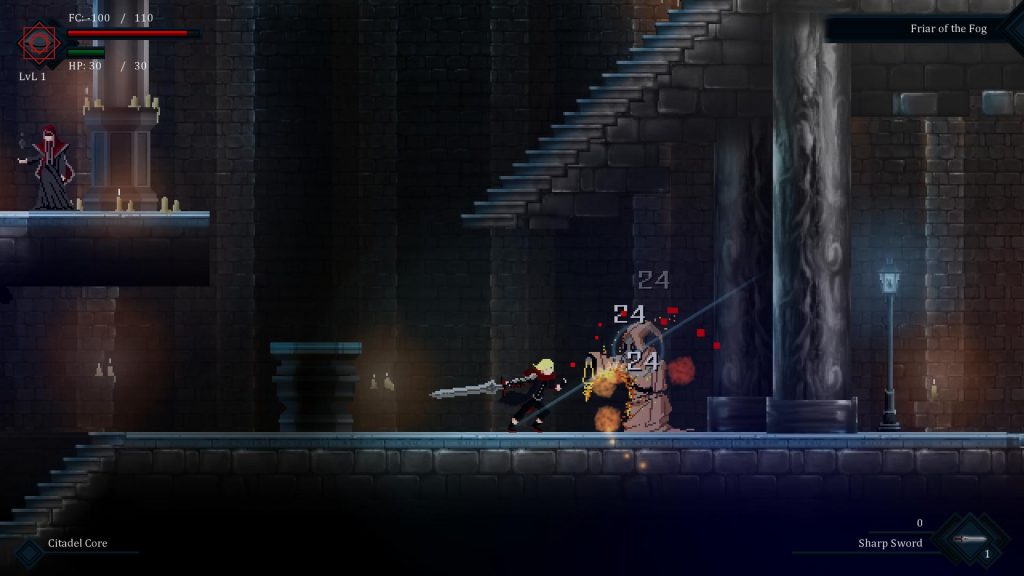 Usurper opts for a retro SNES era styled Pixel art. Again similar in tone to Dead Cells. Usurper relies a lot on darkness, with just the area around your character being fully illuminated. You’ll encounter a lot of castles, towns, and dungeon-like areas throughout the citadel.

Character designs are quite nice. You have your blonde heroic knight in his light armor. The more mysterious Waltham with his dark hair and red suit in an almost Alucard (from the Hellsing manga/anime) design. Then you have Waltham’s associates. Cloaked figures and bandage wrapped monstrosities. You even get a cameo from H.P. Lovecraft as a sullen child aided by a demon that appears to be a Nightgaunt.

Then we have the creatures. Giant red Eldritch creatures. The aforementioned Nightgaunts. Fishmen with guns. Shovel wielding undertakers. Towering knights. Giant eyeballs that open up to reveal rows of teeth. And plenty more. Each enemy is well designed and is varied enough so that you can tell them apart. Which much like Dead Cells again is very useful in knowing how to deal with them.

As well as the scores of minions to face there are also bosses to contend with. Giant masses of flesh. Bizarre amalgamations of organic and inorganic matter. A Giant angel that conceal horrifying blood-red creatures beneath its feathers. Even humanoid foes that aren’t too dissimilar from you. 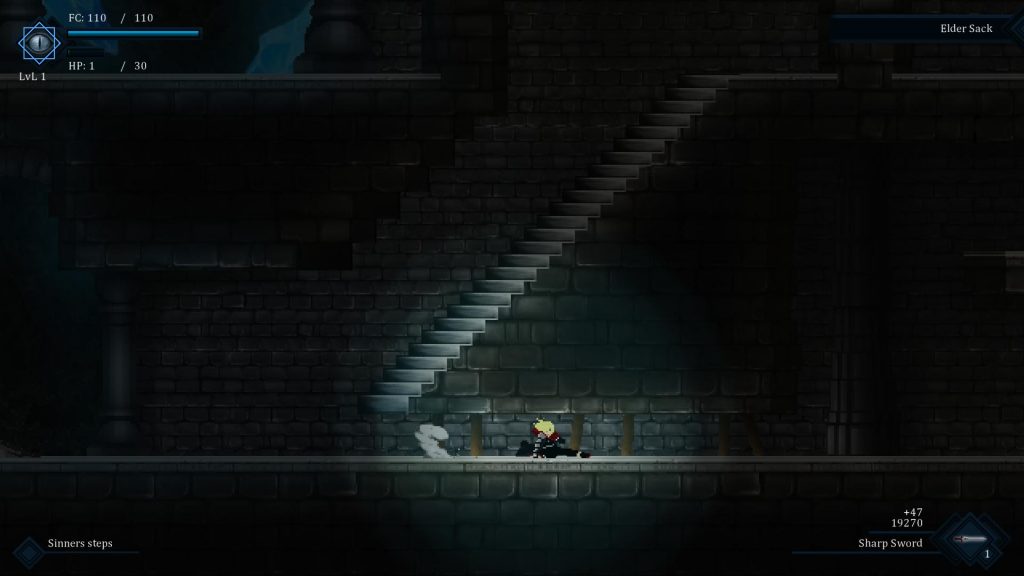 Usurper uses a lot of baroque styled classical music. A lot of organs and gothic sounds. Once again I’ll reference Dead Cells, but I also have to reference the series that probably inspired both games more than any others, Castlevania. Spooky, atmospheric, and most of all fitting.

Sound effects in Usurper are similarly well done. You have the swipe of your sword, damage taking, trap activation and so on. Nothing feels out of place or obnoxious and it just fits seamlessly together with the other aspects. 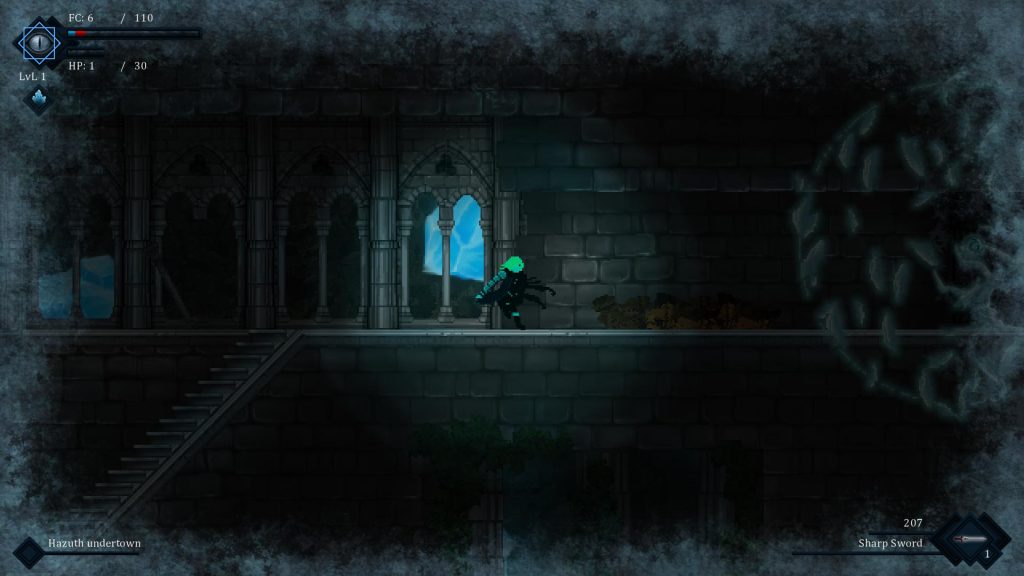 Starting to look a little chilly in here.

Usurper is a Metroidvania game. What this means is that you’ll be doing a lot of exploring. It’s a genre of game that normally consists of a hero exploring locations room by room, uncovering secrets and eventually fighting bosses and gaining new powers that unlock more places to explore.

Starting off you have a standard sword. The ability to jump, and most crucially you have the dodge roll/shield guard system. The guard system which plays into the time manipulation mentioned in the story section is as follows. You have two meters, health, and Guard, health is as expected your life, lose it all and you die. Guard, however, is more like a stamina bar, it drains when you perform actions such as dodges and attacks. Unlike most games when the Guard/Stamina meter is empty you can still perform the actions which bring you into the negatives.

The other aspect of the Guard meter and the reason you want to keep it in the positives is the survival mechanism. When you are unable to dodge an attack the Guard meter will drain to protect you if you have enough in it. So for instance if you don’t see a spike trap and walk into it with full Guard chances are your guard will kick in and avoid the damage for you. It’s an interesting system and one that works incredibly well. Recharging the meter is as simple as waiting or making a well-timed dodge. 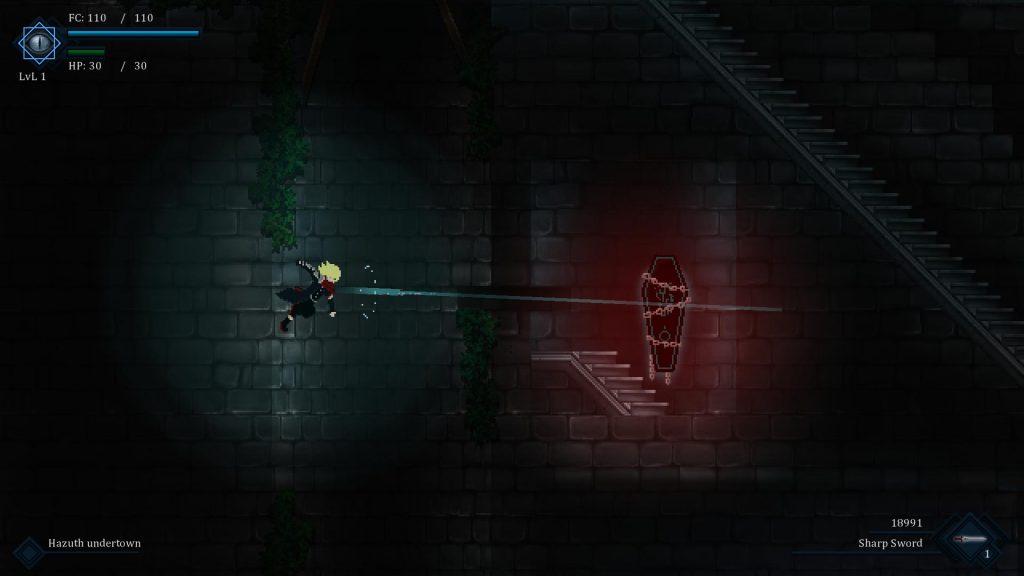 From Hell’s Heart, I Stab at Thee! I hope Dracula is home.

Usurper is a wonderfully made game. The story is interesting and well written. The characters are fleshed out and varied. And the gameplay is challenging but fun, relying heavily on skill over luck. There is quite a lot of the game I didn’t even talk about. There is a leveling system that involves selecting a stat to improve when you have enough resources so you can customize your build. Pets to summon. Spells to learn. Weapons to master. Shortcuts to create and more. It’s quite a dense game and one that is well worth checking out if you are a Metroidvania fan. 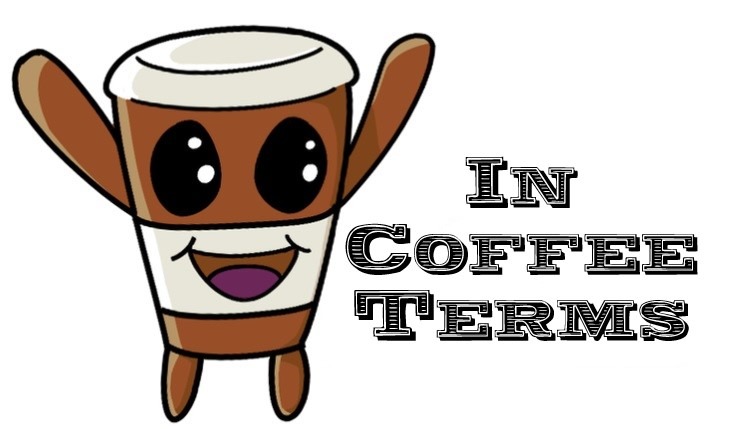 In coffee terms, I would say Usurper is like having a straight black coffee that you love the taste of. But you’ve been having it for so long, going back to it again and again. You might want something new but not drastically different. Something that takes the elements you loved and adds a little something you haven’t tried before. So you go to a new barista, one that loves the same black coffee that has become a staple for many. One that understands why the straight black works. And then they add a pinch of something to compliment the bitter taste, it’s not radically different and it doesn’t make you appreciate the classic any less. But it’s a welcome new taste that you’ll be sure to enjoy for a while to come.

Since you've come this far you might as well check out our other reviews here: Sipreadrepeat.com
Finally if you want to have something to go on the side with your morning coffee each day consider signing up to our newsletter or as we like to call it, our interwebs mail dispersion list: Mailchi.mp

Thanks for reading and as always Stay Roasted!