Hi! we want to tell you about our progress. Currently, we have two coders (Carlos and Chema)

.We want to do some puzzles around this. About particles… “explosive” meteoroids needs particles, the old animated meteoroid explosion seems too “dummy” and we decided to use particles instead. We’ll show the result soon

.And now, a gif of the lightning construction in the editor:

- Chema has included doors to platform stages editor. Now, it’s able to add doors and edit their properties (destination door and the time that takes the camera to move to the destination door). In addition, he made the states and animations that let to the main character entering them. Now, he’s making some adjusts about the main character control, cause it isn’t good enough yet.

And a several pistols designs, Which one do you prefer? 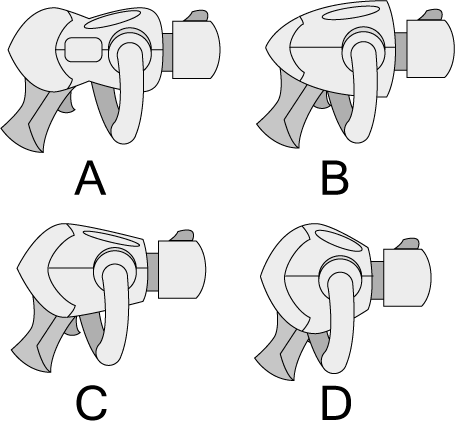 haha, they all look the same. but seriously.. does d not have a trigger? how big are the protaganists fingers? will it block sword attacks? i suppose letter a.

Hey, the body is different! :P. The "weapon" will transform itself into different weapons(pistol,shotgun,assault rifle...) and because of that, his design is important. We'll show you an animated gif of that transformations :)

The trigger is hid by the character hand, that's why there is no trigger in the designs.

And about the attack blocking, We want a hide&dodge&attack gameplay (a kind of Megaman,without blocking)