This updates holds the character creation, inventory management, overall gameplay improvements (like a better camera collision) and some other enhancements and bugfixes. Almost all updates are aimed at registered players.

From now on will registered players have the option to create characters. This character will form the basis of the leveling system. For now you can only choose the tank class, but in the future this will hold 4 classes. It may seem like not much, but it holds a lot of code to even get it this far (while remaining safe and hopefully bug free). You can select the character you want to play with in the lobby screen. Once you joined a server, your character is set with your selected gear. There is a 5 character limit enforced by the database. Any created character after #5 will disappear after logout. Proper feedback will be done in the next release. 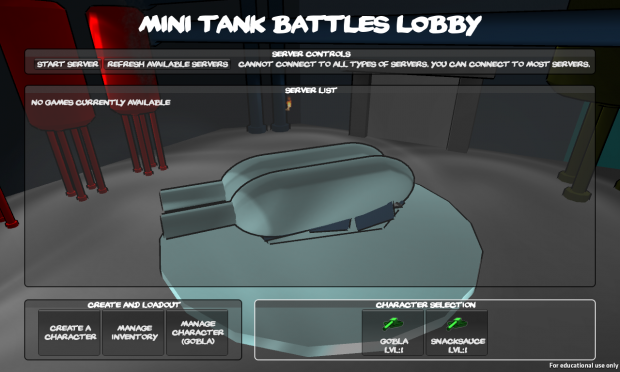 Do note that this below shows the plans for the leveling system and is not yet in the game:
Your character can get experience points and level up in the future. Leveling up will allow you to do harder challenges as well as meeting your new gear requirements. Another thing about the leveling is that you get either stats or abilities (is being sorted out). It is also that your character will hold funds. With these funds you can reset your abilities, or buy specific character bound items. Your funds, level, experience points, stat points and abilities will not shared with other characters. However your main inventory is being shared among other characters as long as an item is not character bound.

Item management is now enabled. This allows you to discard the items you don't need. In the future discarding will be replaced for selling once the currency/funds system is sorted out. This way you can keep your inventory nice and clean. It is also possible to pre-equip gear once you are logged in. This way you can start right away with your favorite gear. Do note that equipping gear during gameplay will at the moment have no effect on your pre-equipped gear. This is due to a contest this game has been entered for. If this option would be enabled, the judges would no longer be able to collect gear (with the version of the game they have). This option will be enabled in the near future when the contest is over. Do note that deleting an item goes without any notification at the moment. 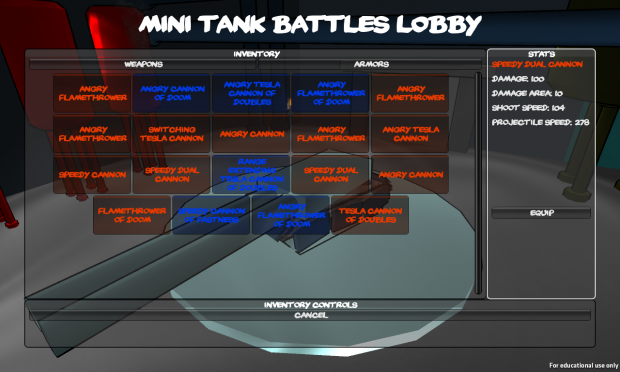 You can now find updated about the game on twitter. Here will the full updates be announced as well as notices for hotfixes. Of course other noteworthy news will be published there as well.
The twitter account is: @minitankbattles 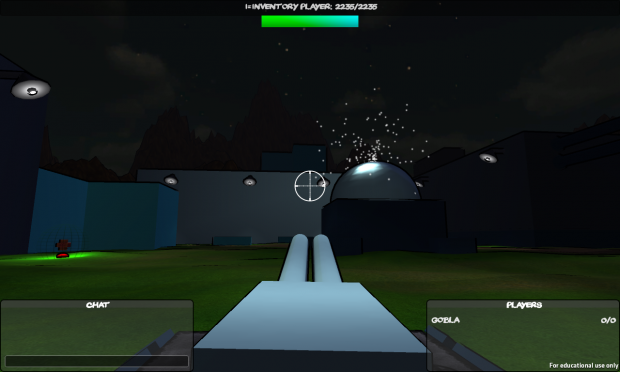 If anyone finds a bug, please report it to me in any way possible. Also if you have a feature request, please send the feature is as much detail as possible. The bugreports and feature request are highly appreciated. Do try to read the "Development roadmap" on Indiedb.com if the feature/bug is already on the list. Thanks in advance!