New massive update and bug fix from Blood of Magic. Check it out.

We have a pretty exciting patch this week as we are happy to announce that we have achieved our first steps towards more character customization within the game. This new feature is only available to the Bounty Hunter at the moment, but we plan to start bringing this new animation and equipment system to ALL models in the game both friendly and enemies. We hope this will start bringing more interactions with the game and bring more entertainment to the game. 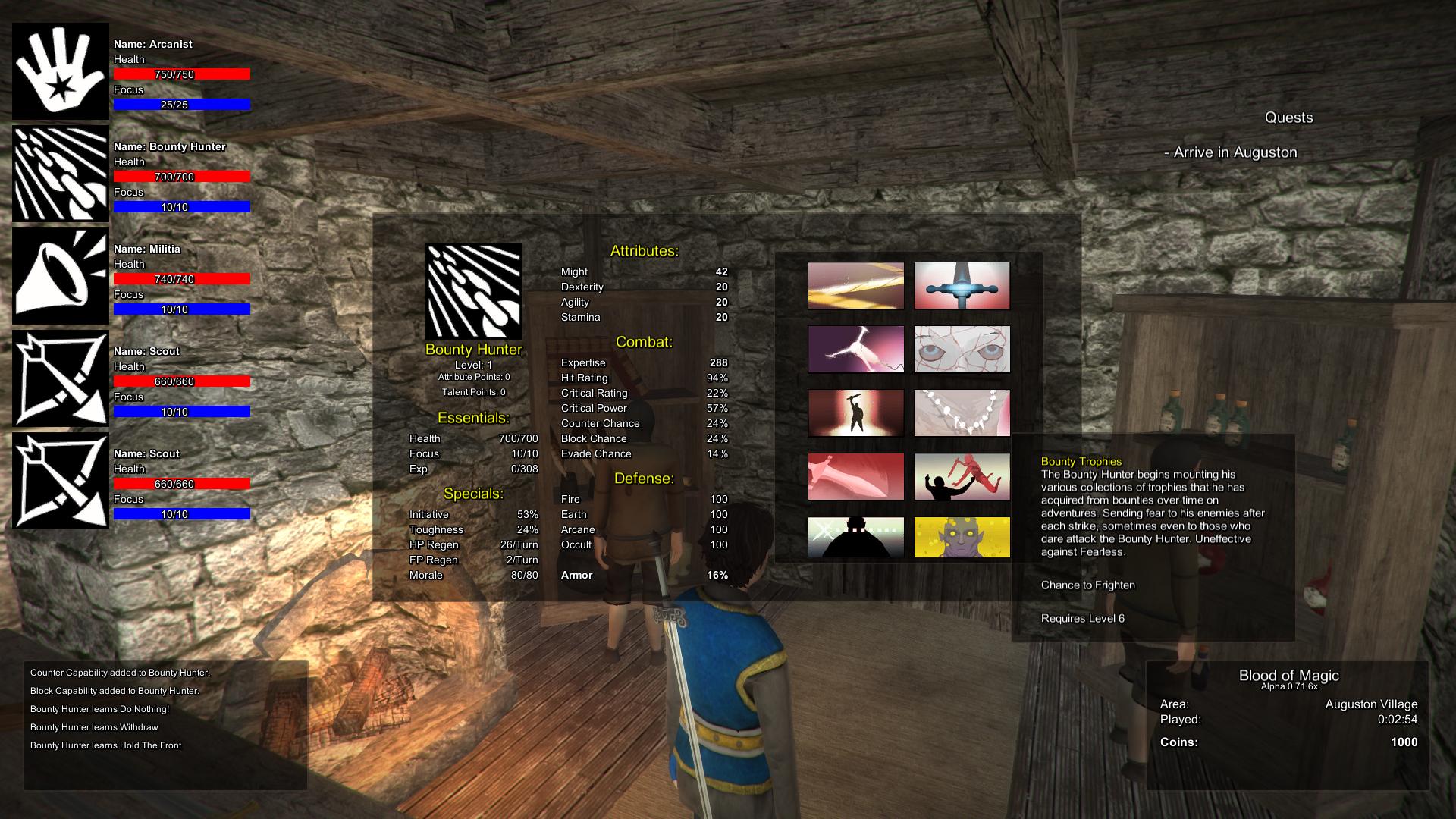 On the Bounty Hunter, you can equip 3 different weapon sets. Sword and shield, dual daggers or sword and dagger, and greatsword. More weapons will be added later but we thought we get these in first since the Bounty Hunter is a master of combat and has the ability of wielding any type of melee weapons. Most melee classes will have this option in the future with exception and variations with all the others. Same goes for range and spellcasters.

We’ve also introduced 24 new weapons to the game to help accommodate this new feature. All of them are available for purchase at the market. We are planning a big crafting overhaul for the next patch, so players will be able to craft these fine weaponries.

New Icons added to the Bounty Hunter Talent Tree!, our new 2D artist was able to finish our first skill icons, which we plan to have for all characters with talent trees.

More sound effects added to the Bounty Hunter, these are more generic combat sounds we are testing and will eventually start having for all characters.

The Bounty Hunter replaces the Mercenary Follower and can be recruited at either the Market or Inn.

-Arcane Ripple Bleed Bug finally fixed! No longer will you be tagged with a bleed effect after having the enemies life force go through the abyss from ripple effect.

-Music added for waking up. Something everyone wants, just like a nice cup of coffee too!

-Health UI on the left screen have been reduced in size.

-Random colliders near the gate entrances around the towns have been removed.

-SHOP UI has been fixed to match the new UI styles. Player will find it much easier to access now.

-ALCHEMY VENDOR added, you know where that random alchemist is? Standing in the middle of the field in front of where the lab will be? Well guess what? He sells all the basic alchemy goods you would get at a lab. This will help early players gain potions and a healing follower.

-ESC has now been reworded to be an alternative to tab, so now both do the same function.

-Minor Typo Fixes throughout the game.

-Fixed Console box from saying all party members names and will instead say “Party”.

-Some minor bugs were fixed