Leevi is back after a month to discuss how and why the menu has been changed to be better.

Hello again to everyone reading this! I'm sorry we've been quiet for a while, things have been proceeding slowly but surely, and I'd like to show you one of the largest changes we've made for Combat Racers... The menu. I will start with what we had at first, what we have done to them and then show a side-by-side comparison of the improvements we've made.

We have gone through a few iterations of our menu, with our latest placeholder being about the same one we have in the downloadable Assembly contest build. It was developed solely to make the game playable outside of the UE 4 editor, but we still set ourselves a basis on what we wanted our players to be able to do.

We wanted the players to be able to choose from both keyboard and conroller. Combat Racers is better with a controller, but we know that not all players have four controllers lying around, which is why we wanted players to have the choice. This was a fairly simple thing to add, and people didn't have problems understanding it. The main thing wa wanted in Combat racers is the ability to choose a loadout and car that suits your playstyle. And thus our first priority after the core gameplay was done was to ensure that there was a wide variety of weapons for the player to choose from. We implemented this by giving each player 1/4th of the screen which had a box detailing information about their current selection and their choices of car and Front/Side/Rear weapons for the player to see what he had chosen thus far. The problem we ran into was that players focused on the colourful information box and did not pay attention or properly notice how to switch the weapons they had. In addition to the tried-and-true Deathmatch gamemode we wanted a few other gamemodes. In addition to just that (and the obvious "choose your level"), we wanted the players to have the option of choosing variables to change the game. Maybe you'd just want to play three rounds to test out a new loadout? Maybe you thought that 30 seconds wasn't long enough to blast your opponents in Elimination? All in all, this menu wasn't very pretty but it had the basic functionality we needed for the players to be able to play the game.

So one of our largest tasks during the past month have been to overhaul our menu into a more polished look. It is a vast improvement over what we had before, and I'd be proud to claim it to be a finished version. So what changed, exactly?

1. The order of things

The order is still there, and it's still controller - character - loadout - game settings. The distinct difference here is that all the choices are now in line with the other choices. So instead of having a horizontal line for the controllers, a vertical line for the characters and then a four-way-split for the weapons, all of the options are in one horizontal portion for each player, making it easier to follow. 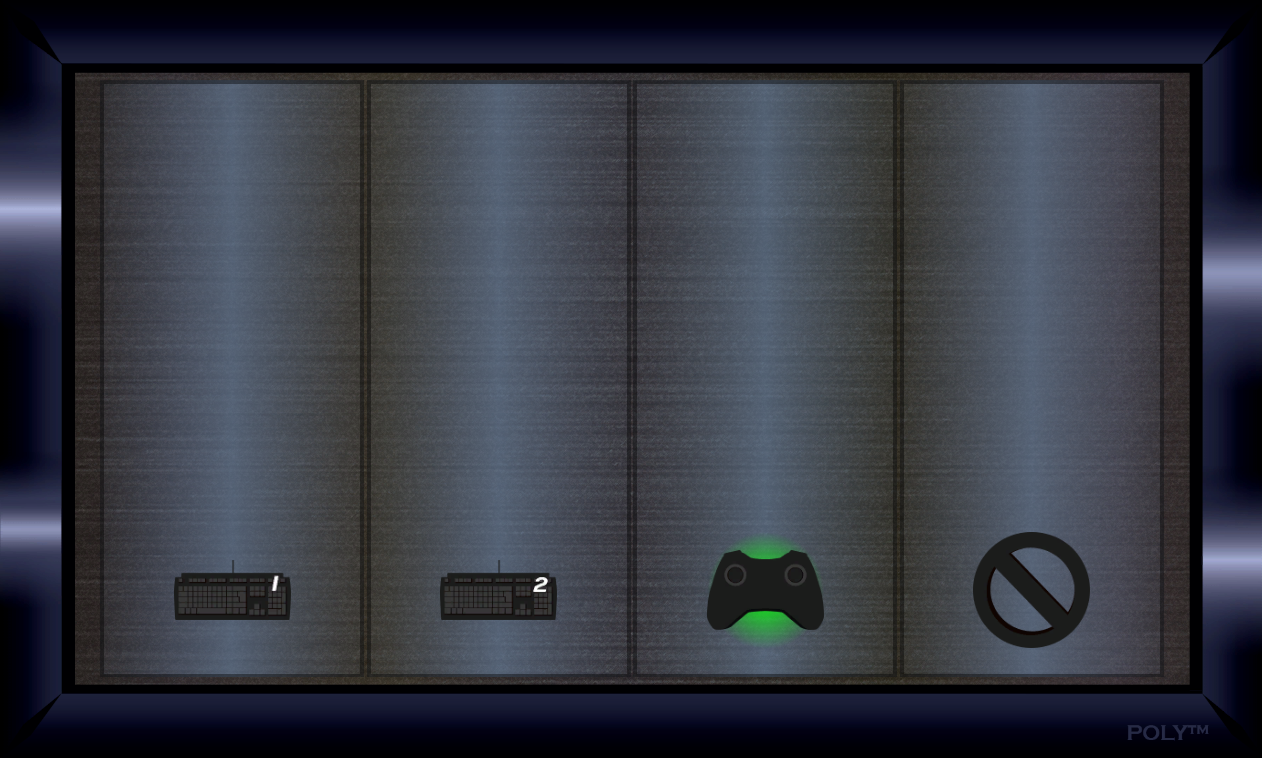 Each character has their own emblem, which is visible in their cars. Your section of the screen also changes colour, making it easier for the players to focus on their own part of the screen. You can also see that the menu has borders now as well, adding to the theme of the game. The background of the menu has a slight animation too, helping to make it resemble a TV screen. The colourful box that we had was distracting for the players, not to mention that players had to look for their own selection for a moment before learning how it worked. First off, you choose your car first and then your weapons instead of choosing both at the same time. After that, we replaced the text indicating the stats of your weapon, for example "Damage: Low" with two simple bars that show quickly how fast the weapon can fire and how much damage it does. In addition to this, we added a more clear indication of which facing the weapon you are choosing on is. These changes left us with a much simpler yet a lot prettier menu for our players to enjoy, which, when compared to what we had, was looking a lot better.

In addition to changing the menu up, we needed to have something to signal to the players when they changed from one screen to another. Since we had chosen a TV-theme for the menu, the next step was only logical.

I hope this gives you ideas on how to make your own menu look better. We're hoping to get you more updates soon, hopefully about our Greenlight campaign! Meanwhile, check out the Greenlight page and check us out on Twitter and Facebook!