Leevi is back in this update to tell about what's been going on these past two weeks. Including marketing hints and a Let's Play video.

A few weeks have passed...

Hi everyone. It's been really busy for us here at The Major Game Company. We were presenting Combat Racers at The Northern Game Summit, a local industry event, in addition to developing the game as usual. We're currently redoing the menu and hope to have some good images to show you next time. 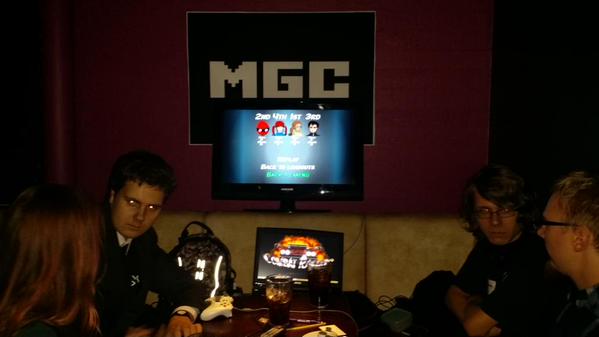 That's our booth at the afterparty, with me gathering feedback from interested players after a game.

The most interesting thing that has happened so far has been the Let's Play of our newest version on The Challenge. I met the channel owner Bram as he was a friend of a friend. We talked about it a bit and he agreed to do a quick let's play for his channel! This was amazing for us and gave us a chance to see what others think of the game. This was our first time that we actually discussed a video with a youtuber, which was a good learning experience, which is why I'd like to thank Bram for his interest in us.

To put it simply, the important thing you need to do when discussing your video is to agree on a few basic details but don't try and dictate to the Youtuber what he or she should do. Just give the basic information, note if there are any areas you'd like the focus to be on and what kind of a video you'd hope for. With Bram it was really easy as he (and propably most youtubers) know what they're doing, so let them do what they're good at without trying to micromanage.

So there's been a lot of talk about the importance of game marketing, oversaturation of games on Steam and somesuch. I'm not the best person to talk about such big issues and others have written better articles about it already, which is why I'll just give out a few things I've learned during these two months of promoting Combat Racers. I must say that in my opinion marketing is extremely important for game developers nowadays and definitely should not be ignored.

This is an obvious point which I realized about half a year too late. It's alright if you don't have a game to show as long as you have promotional material. Show screenshots of early builds, concept art, tell about your game design. Whatever you do, atleast do something to get the word out. Marketing is time-consuming and getting people to notice you takes time. This is obvious looking back on the project, we just didn't realize it at the time.

I learned in The Northern Game Summit that the lifetime of a typical tweet is a few seconds. The more followers you have, the better, of course. But if you give one big weekly-or-so update (like what we're doing with IndieDB) chances are you won't be too noticeable. But you can't just post interesting things about your work everyday, right? Which brings me to another good point...

At NGS, there was an awesome talk given by Johan Toresson titled ”Fuck Advertising – Do something”. One key thing he mentioned was that one should treat their company's facebook page as their own page. If you are only giving out updates about your game and nothing else, you seem to only be self-promoting yourself and not really giving much for followers, except the ones who are really interested in your project. What you should do instead is to post various other things as well. Find a good article online? Post it for your followers to see. The occasional funny cat picture? People still like those, right? If you post interesting things for your followers, they will think you are interesting as well, leading to more followers and interest in you. 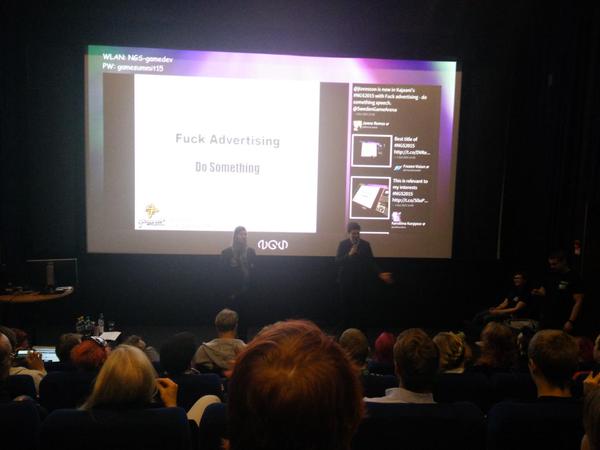 Johan is on the left, this was taken right before he started giving us golden marketing hints.

If you've been following our posts before, you'll see that a few updates back we switched from using a single image to a moving gameplay gif. We did this because movement captures peoples attention better than static images do. In addition to that, using a gameplay gif is much better at giving players an idea about what your game is about, compared to just a logo or a static screenshot. They also don't need a separate ”play” button and are fairly small in size compared to video, meaning that they are easier for people to access and see.